Effects of The β-Carotene on the Growth Performance and Skin Pigmentation of Rainbow Trout (Oncorhynchus mykiss, W. 1792)

Copyright: © 2016 Kelestemur GT, et al. This is an open-access article distributed under the terms of the Creative Commons Attribution License, which permits unrestricted use, distribution, and reproduction in any medium, provided the original author and source are credited.

In this study, the effect of dietary supplementation of β-carotene (beta carotene) on growth and skin pigmentation of rainbow trout. Fish were fed with diets containing 30 and 70 mg β-carotene kg-1, and without supplemented basal diet for 12 weeks. Weight gain (WG), specific growth rate (SGR) and survival rate (SUR) in the C group was significantly lower (p<0.05) than beta carotene supplemented diet groups. Feed concervation ratio (FCR) in the C was significantly lower (p<0.05) than β-carotene supplemented diet groups. But PER of fish did not differ among the diet groups (p>0.05). Crude protein value of fish meat was higher in beta-carotene supplemented diet groups (p<0.05) than control diet group. But, crude lipid and ash were not statistically different among the groups (p>0.05). The lowest carotenoid concentration levels in the lateral and tail regions of the fishes in the experimental groups have been obtained in the C (control) group (lateral region: 0.263 ± 0.021 ug/g; tail ragion: 0.009 ± 0.002 ug/g) while the highest cumulative values have been determined in the fishes of β70 groups (lateral region: 0.643 ± 0.46 ug/g; tail region: 0.124 ± 0.015 μg/g).

Skin color is important factor in aquaculture influencing the commercial value of fish, mostly in those species sold live or fresh. Most studies of fish skin color in aquaculture have focused particularly on the effects of diet [1,2]. Synthetic carotenoids are of increasing importance for the pigmentation of farmed fish [3].

Carotenoids are synthesized by plants and microorganisms. They are present as micro-components in fruits and vegetables and are responsible for their yellow, orange and red colors. In recent years the antioxidant properties of carotenoids has been the major focus of research [4-6]. Animals are able to absorb carotenoids from their diet, and deposit them in the unesterified from [7]. They are absorbed intake by the mucosal cells and appear unchanged in the circulation and tissues. Carotenoids are absorbed differentially by different tissues. Little is known about the mechanisms of tissue absorption of carotenoids at this time. The major site of tissue storage of carotenoids is the adipose tissue [5,6]. However, the pigmentation of rainbow trout change throughout life. Generally, fingerlings have limited capacity for carotenoid deposition in the flesh, while significant amounts are deposited in the skin [8]. The decrease in total carotenoid content in fish flesh after reaching a maximum value may also have originated from initiation of maturation of fish gonads. Fish undergoing sexual maturation are known to mobilize carotenoids from muscles and transfer them to their gonads and skin [9].

Beta carotene one of the carotenoids responsible for the orange and red pigmentation of fish. Aquatic animals cannot synthesize carotene and therefore it must be supplemented in the diet. As well as being a pigment, beta-carotene has been shown to have other biological and nutritional functions essential for fish growth and health. This study was therefore undertaken to find out if synthetic beta carotene at two different dietary concentrations would affect survival, growth, and skin pigmentation of juvenile rainbow trout.

This trial was conducted in Keban Dam Lake (Elazig, Keban) third hunting ground in special facility. Three cages were used in the research. Each cage was stocked 300 rainbow trout (Oncorhynchus mykiss). Fish (initial average weight, 60.3 ± 0.27 g; initial length, 17.24 ± 0.04 cm were distributed into three round cage (mesh size: 1.8 mm, bag depth: 4 m, diameter: 9 m). Cages were placed approximately away from 100 m from shore. Dissolved oxygen and temperature values were recorded with a portable YSI Probe (55 Model 51/12) duration of the research. The pH of the water in the tanks where the fish were situated was determined by a portable Checker brand pH meter.

Table 1: Composition and proximate analysis of the experimental diets.

All experimental fish were acclimated to the basal diet for two week prior to start of the trial. The experimental fish were fed three times a day for 4 weeks. Daily feed allowance was 3% body weight per day. The feeding trial was conducted for 12 weeks. Before the fish were anesthesia (15 mg l-1 Quinaldin), these body weights were measured one every 2 weeks. The prepared pellets were dried in 24 hours at 45°C and during the trial were stored at +4°C. Proximate composition of diets were assayed according to AOAC methods [11]. Water content was calculated by drying in an oven at 105°C until achieving constant weight, and ash were assayed by combustion in a muffle furnace (550°C for 16 h). The determination of crude protein after acid digestion (N×6.25) was analysed by the kjeldhal method and lipids were extracted with diethyl ether by the soxhlet method.

A 1.5-2 g sample (diet and tissue) was homogenized in the presence of Na2SO4 and extracted with acetone. The exctract was filtred with chloroform into a round-bottomed flask and evaporeted to dryness with a rotary evaporator at bath temparatures between 30-35°C. The residue was saponified with 1 ml 50% KOH and 10 ml methanol in a flask that fillet with nitrogen before being left for 2 h in the dark. Thereafter, the mixture was transferred to a seperating funnel with 40 ml each of ether and distilled water and extracted twices. The pooled ether extract were filtered through Na2SO4 to remove residual moisture, and evaporated to dryness under vacum. The residue was dissolve in hexan [7,12]. Jast after the pruduction of solution was determined in 472 nm. Carotenoid concantration was calculated according to this formula:

All the values were presented as mean ± S.E. Differences between group means were assessed by a one-way analysis of variance (ANOVA) and post-hoc Duncan test used by SPSS/PC computer program (SPSS, 1999). Results with P<0.05 were considered statistically significant.

Skin carotene concentrations lateral and tail region of fish fed with the diets are presented in Table 3.

Table 3: Carotenoid concentrations of lateral and tail regions of the experimental groups determined with the spectrophotometric method (μg/g).

The results of one-way ANOVA test showed that carotene concentration of fish skin were positively affected by dietary supplementation of beta carotene. β-carotene levels in lateral region of fish were found to be significantly higher in the β70 group than other groups (p<0.01), followed by the β30 group. The lowest carotenoid concentrations in the tail regions was obtained in the C group than other groups (p<0.05). Skin carotenoid concentraions of tail and lateral region of the experimantal groups were showed (Figures 1 and 2). For salmonids and trouts, increasing worldwide production and pricing pressures have focused attention on flesh quality issues to satisfy market preferences. Although there is no simple definition of flesh quality factors, of particular importance are the nutritional value, safety, flavour, colour, preservation and processing characteristics of the fillets [13]. Carotenoids, particularly those that are vitamin A precursors, have received increasing attention in recent years due to their reported health benefits. Already, the effects of carotenoids on aquatic animals are multi-faceted: they enhance larval growth and survival, improve the performance of broodstock and nauplii quality, as well as increase resistance to diseases [12]. Carotenoids also have excellent antioxidative characteristics. Cold-water fishes, like salmon, have a high level of polyunsaturated fat in their membranes, and protection of lipid tissue from peroxidation seems to be a metabolic function [14]. Some researchers found that canta supplementation in diet had a growth promoting effect in Atlantic salmon fry [7,14]. Hu et al. growth of fish fed highest level (200 mg) of β-carotene reduced to similar WG as those fed diet supplemented with 15 mg β-carotene migth be harmful to tilapia [15]. High beta-carotene thus migth build up relatively high amount of oxidized producs in animal body. Hu et al. reported that beta-carotene needed for normal growth of tilapia was 26.6-44.3 mg/kg [15]. In our study, it was observed that growth performance of fish were positively affected by dietary supplementation of beta carotene. These results indicated that beta carotene supplementation in diet has the growth stimulating action for juvenile rainbow trout. But, in contrast another previous experiments reported that various sources of did not affect growth and survival of various fish species [16,17]. Exting differences in water temperature, feeding regime, diet formulation and size of fish migth be responsible for the observed differences. 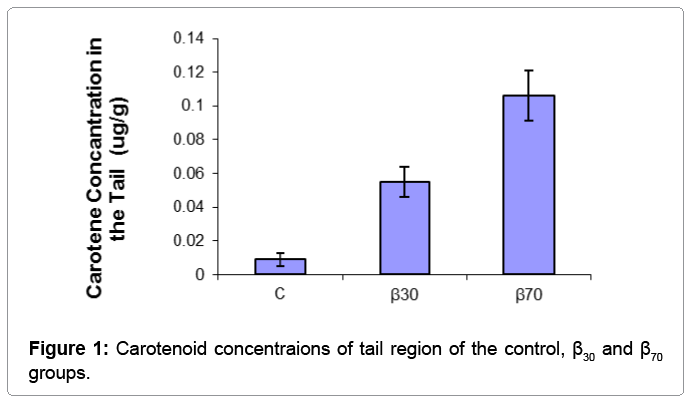 Figure 1: Carotenoid concentraions of tail region of the control, β30 and β70 groups. 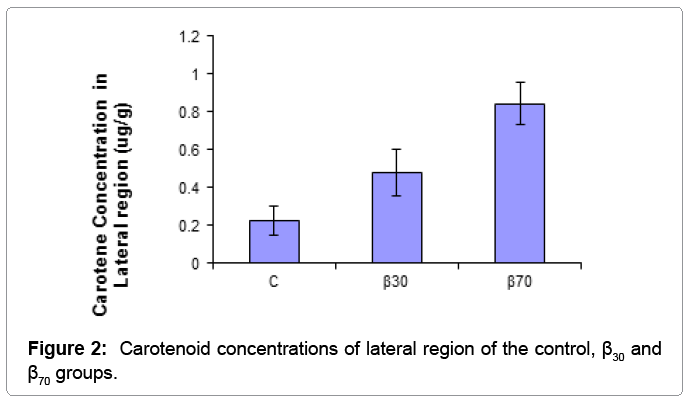 Figure 2: Carotenoid concentrations of lateral region of the control, β30 and β70 groups.

In this study, β-carotene dietary supplementations increased regional coloration in juvenile rainbow trout. Similarly, previous experiments reported that there was increased in the concentration of carotenoids in fish flesh as the duration of feeding of fish on pigmented diets was increased [8].