Evaluation of Two Levels of Plum Concentrates as an Alternative to Polyphosphates in Post-Harvest Preservation of Ictalurus punctatus X I. furcatus Catfish Fillets

Copyright: © 2014 Lihono M, et al. Thi is an open-access article distributed under the terms of the Creative Commons Attribution License, which permits unrestricted use, distribution, and reproduction in any medium, provided the original author and source are credited.

Marinades made of water, salt, and phosphates have been applied to fish fillets to bind water, to prevent lipid oxidation, extend shelf-life, and to control freezer burn (frozen fillets). Recently plum products have been employed as marinades in poultry, beef, and pork products: pectin acids contribute to moisture retention, malic acids enhance flavor, sorbitol is a humectant, and phenolic compounds contribute to the antioxidant properties which slow lipid oxidation and improve human health. Hybrid catfish fillets were vacuum-tumbled to attain either a 0.45 or 1.0% level of plum extracts. Pickup minus drip loss after 24 h was 11.81%, and pH 6.82 at the 0.45% level and 14.60% and 6.73 at the 1.0% level. Fillets were slightly redder/pink. These results are comparable to those achieved with the conventional polyphosphate marinades without additional salt and phosphates and with added beneficial antioxidants.

Channel catfish currently is number six of the top ten sea foods Americans eat, with 232 million kg processed in 2008 [1]. However, the industry has been contracting during 2003 to present, with acreage and producers down by approximately 11% in 2008. The Mississippi Delta (does include Arkansas Delta) has over a billion dollar impact from the catfish industry and is the number one growing region for catfish and U.S. aquaculture. Marinades made of water, salt, and phosphates have been applied to catfish fillets to bind water, to prevent lipid oxidation and extend shelf-life, and to control freezer burn (frozen fillets). This is accomplished by holding water and preventing lipid oxidation contributing to the preservation of taste.

Recently, plum marinades have been employed in poultry, beef, and pork products to increase the quality of the meat. According to the Food and Drug Administration, plum extract, plum fiber, and plum powder are GRAS and do not represent any safety concerns if used at levels varying from 5-30% in marinades and at levels from 0.5-3.0% in meat block [2]. Marinade with 1.1% plum concentrate retained as much marinade at 11.8% as Sodium Tripolyphosphate (STPP) in a chicken product [3]. Plum has the potential to increase moisture retention, to retard lipid oxidation, and to provide antioxidants for health nutrition. While pectin acids contribute to moisture retention, malic acids enhance flavor. Other active constituents of plum extracts are sorbitol which is a humectant, and phenolic compounds which contribute to the antioxidant properties [4]. The major phenolic compounds are chlorogenic acids and pranthocyadines of the 41 detected [5]. These antioxidant compounds have the potential to slow lipid oxidation [6]. Plum extracts are also recommended for improving human health, including bone, cancer and cardiovascular aspects.

Conventional STPP marinade treatments on the other hand are coming under increased scrutiny and criticism. This process adds salt and phosphates, which can be undesirable for some segments of the population with sensitivity to these compounds.

For each of the two replicates in the treatment, approximately 2 pounds (0.9 kg) of fillets were marinated with a brine solution formulated for a pick-up over weight of 15%. The fillets were vacuumtumbled in a small, experimental tumbler. The finished marinated product contained approximately 0.45% or 1% of plum concentrates; the concentration of salt was 0.5% salt.

• Commercial-sized (≥ 0.45 kg) hybrid catfish and fillets were obtained from the UAPB Department of Aquaculture and Fisheries. Fillets were hand-filleted from just-killed fish.

• Each treatment included 1 kg of hybrid channel catfish fillets to be marinated in a brine solution and place in a vacuum tumbler for a projected 15% pick-up.

• The fillets were tumbled under the following conditions: 4°C, 20 mmHg, for 20 minutes under 18 rpm.

• After being tumbled (PMP 230-C, Lyco Marinator, Columbus, WI), the fillets rested for five minutes and then placed in polyethylene bags to be stored at 4°C for 24 hours for marinade pickup determinations.

pH: Use of pH meter (Orion Star A211, Thermo Scientific) with a meat penetrating probe. Average of 4 readings. 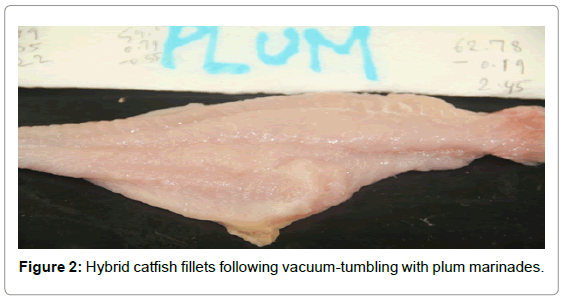 These results are comparable to those of various phosphates where channel catfish fillets were treated with a marinated solution for a 15% pick-up containing 0.45% phosphates and where pick-up were 8.6-9.1% and pH 6.52-6.68 [7]. An informal survey indicated approximately ½ of participants would try plum marinades. In addition, the increased redness/pink may be desirable in this species. Catfish consumers have preferred such slight coloration as an indication of freshness, and the slight redness/pink coloration is similar to other premium whitefleshed fish such as grouper and snapper.

Plum extract incorporation into fish fillets thus would seem to be an alternative to polyphosphates for holding moisture and reducing lipid oxidation. The flavonoid antioxidants present in plum extracts may enhance the health-promoting motivation for purchase and consumption of fish and catfish. These preliminary data justify further study in the use of plum concentrates in treatment of channel catfish and hybrid catfish fillets (as well as other seafood products): including shelf life, frozen storage quality, and taste and appearance. 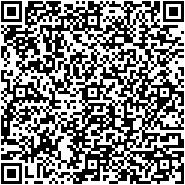