Copyright: © 2015 Lo CY, et al. This is an open-access article distributed under the terms of the Creative Commons Attribution License, which permits unrestricted use distribution, and reproduction in any medium, provided the original author and source are credited.

Methotrexate (MTX) is a widely used chemotherapeutic agent for the treatment of pediatric malignancies, especially leukemia, lymphoma, and osteosarcoma. MTX use results in varied toxicities that include mucositis, hepatotoxicity, nephrotoxicity, and neurotoxicity. The mechanism(s) that lead to subacute MTX encephalopathy are not well understood. Furthermore, there are few known clinical characteristics, host genotypes, or preceding factors that identify patients at risk. We describe a cohort of patients with subacute MTX encephalopathy treated at Lucile Packard Children’s Hospital at Stanford University from 2005 to 2011.

Institutional review board approval was obtained for this historical cohort study. We defined subacute MTX encephalopathy as described previously in the literature [1-3]. We searched the leukemia (lymphoblastic and myeloblastic), lymphoma (non-Hodgkin’s, Hodgkin’s), and osteosarcoma databases of Lucile Packard Children’s Hospital to identify patients who had subacute MTX encephalopathy from January 1, 2005, to December 31, 2011. We reviewed all patients who developed neurologic symptoms within 2 weeks from MTX therapy. Ethnicities were defined by patient self-identification. Primary malignancy and central nervous system (CNS) tumor staging were defined as outlined by standard guidelines.

All patients were evaluated and diagnosed by a pediatric neurooncologist. We excluded patients who had other identifiable causes for their symptoms as determined by the neuro-oncologist, including posterior reversible encephalopathy syndrome (PRES) and ischemic or hemorrhagic infarct. All information was obtained from the patients’ medical records. Neuroimaging studies were retrospectively reviewed by a single neuro-radiologist. Gender and ethnicity demographics for California children were obtained from the California State Department of Finance open access data [4]. Most recent demographic data were available from the year 2010. Chi-squared analysis was performed for distribution statistical calculations.

Among the patients who received MTX from January 2005 to December 2011, 21 of 272 (7.7%) with leukaemia or lymphoma met the study criteria: 20 patients had leukaemia and 1 patient had lymphoma. There were no identified patients with osteosarcoma; therefore, further osteosarcoma data were excluded from this study. Patient clinical characteristics and demographics are outlined in Table I. None of the patients had a history of preceding neurologic disorders.

Hispanic ethnicity was the largest racial group in the cohort, representing 13 patients (61.9%). This was followed, in descending order, by Caucasian, Asian, and African-American ethnicity (Table 1).

#: total incidence of signs and symptoms among 21 patients 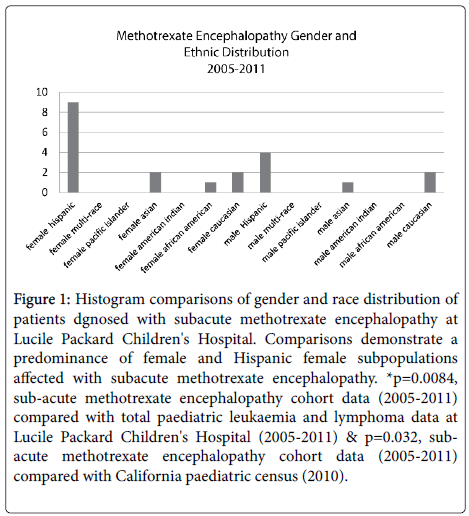 There was no correlation between length or severity of symptomatology with patient demographics, cumulative MTX dose, or type of preceding MTX exposure. Five patients (23.8%) experienced recurrent symptoms when rechallenged with MTX. All 5 were female, and all recurrences occurred after intrathecal MTX reintroduction. Of these 5 females, 2 were Hispanic, 2 were Caucasian, and 1 was African- American. There were no correlations between cumulative MTX dose, timing of MTX reintroduction, and relapse incidence.

Subacute MTX encephalopathy is an uncommon treatment complication. It can be disturbing to patients and their families due to the unique neurologic disturbances (e.g., seizures, motor deficits, speech disturbances, and emotional lability). We performed an historical cohort study of patients with this diagnosis to attempt to identify risk factors. There are epidemiologic findings revealed in this patient cohort that have not previously been reported. Compared to the hospital data, there is a predominance of females affected with subacute MTX encephalopathy. This finding is not replicated when compared to the California census data, although it approaches statistical significance. Furthermore, though small numbers preclude power for statistical significance, it is important to note that all 5 recurrences in this cohort occurred in female patients. Secondly, while Hispanic ethnicity alone was not found to be statistically significant, we found there was also a significantly increased number of affected Hispanic females, which also was not reflective of a predominance of Hispanic females treated at this institution or a predominance of Hispanic females in California

To the authors’ understanding, this is the first cohort in which there is a predominance of Hispanic female patients. The underlying pathophysiology of this interaction is not well understood. One speculation is a possible ethnic link to methylenetetrahydrolate reductase (MTHFR) polymorphisms. MTHFR polymorphisms have been linked with acute MTX toxicities, including hepatoxicity, neurotoxicity, nephrotoxicity, and mucositis [5-8]. MTHFR plays a key role in folate metabolism, catalyzing the conversion of 5,10-methylenetetrahydrofolate to 5-methyltetrahydrofolate. Antimetabolites such as MTX block this enzymatic pathway, resulting in organ toxicities. The most common MTHFR polymorphism, 677C>T, has been particularly implicated in MTX toxicity [5-8] and 1 case report of subacute MTX encephalopathy [9]. This polymorphism has been reported to be of especially high incidence in Hispanics [10-12]. This phenomenon may help explain the predominance of affected Hispanics on this cohort, but does not explain the female predominance; this second finding could interact with the distribution of the polymorphism and warrants future investigation.

One potential confounding reason for the predominance of females reported in this cohort is the relatively high incidence of affected female patients with HR B-ALL treated at this institution. However, from 2005 to 2011, there were 43 total males who had HR B-ALL treated, but only 2 developed subacute MTX-encephalopathy. Alternatively, there were 45 total females who had HR B-ALL treated during this time frame, and 8 developed subacute MTXencephalopathy. Again this highlights a possible inherent difference between females and males in MTX metabolism and MTX encephalopathy risk.

There are potential confounding variables that may contribute to the symptomatology described in this patient cohort. Six patients were exposed to low-dose cytarabine (75mg/square meter) preceding encephalopathy onset; however, cytarabine neurotoxicity presents more commonly with cerebellar symptoms (specifically ataxia and nystagmus), in patients given high-dose cytarabine (3g/square meter) [13-15]. Furthermore, MRI findings in patients with cytarabine neurotoxicity are predominantly normal [16]. Several patients also received vincristine prior to symptom onset; nevertheless, vincristine neuropathy typically affects peripheral nerves and presents with such symptoms as jaw pain, extremity weakness or paresthesia, and constipation. Five patients also had evidence of CNS disease at malignancy diagnosis, which has been associated with neurologic symptoms [17-19]. However, these patients did not have any evidence of leukemic cells in the cerebrospinal fluid at the time of encephalopathy symptoms. Finally, cranial irradiation can exacerbate encephalopathy symptoms . This may explain why 2 patients in this cohort with CNS relapse did not have neurologic sequelae during preceding treatment courses but developed encephalopathy symptoms with CNS relapse treatment.

In summary, subacute MTX-induced encephalopathy is a poorly understood treatment complication. In this historical cohort review we report a predominance of female and Hispanic female patients. All recurrences occurred in female patients after repeat intrathecal MTX exposure, despite dose-reduction and/or aminophylline prophylaxis. These findings highlight possible gender and ethnic risk factors of disease, which may indicate a genetic polymorphism that increases risk. Future prospective and genome-wide association studies will provide better understanding of the incidence of this entity and may validate female gender and Hispanic ethnicity as risk factors.

The authors do not have any conflicts of interest to disclose