Copyright: © 2016 Moine J, et al. This is an open-access article distributed under the terms of the Creative Commons Attribution License, which permits unrestricted use, distribution, and reproduction in any medium, provided the original author and source are credited.

Circular tanks are widely used in aquaculture, and the addition of verticallyÃ¢Â€Â‘suspended rod arrays can provide structural complexity during fish rearing. This study assessed the effects of such an array on water velocities at two flow rates in 1.8-m diameter circular tanks. At inflows of 62 L/min and 113 L/min, the presence of the rod array significantly reduced in-tank velocities. The largest decrease in velocity was observed on the water surface midway between the center and edge of the tank. The presence of vertically-suspended rods significantly reduced velocities at each sampling depth (surface, mid-tank, bottom), at each radius (30, 60, or 90 cm from the center of the tank), and at each position (prior to, immediately after, and directly opposite the rod array). At both of the flow rates, velocities with the rods present were still sufficient to create a vortex capable of keeping the tank self-cleaning. The decrease in velocities may explain part of the reason for the positive effects of vertically-suspended rods on fish rearing performance.

Circular tanks are commonly used during the culture of fish and other aquatic organisms. In comparison to rectangular rearing units, circular tanks have uniform water quality [1,2] and the distribution of velocities inside the tank is very heterogeneous. Circular tanks are also self-cleaning, with solid waste flushed through a center drain [3].

The movement of water within circular tanks has been previously described. According to Sumida et al. [4], the water descends along the tank wall towards the bottom center of the tank. This circulating pattern produces a large single vortex [4]. Water entering at the surface causes an inward radial flow along the bottom of the tank, which carries settleable solids to the center drain and can create creating the self-cleaning property. This also produces a torus-shaped region about the center drain which can become an irrotational zone with lower velocities and poor mixing [3].

The circular tank environment has been enriched by the addition of structural complexity to improve fish rearing performance or poststocking survival [5,6]. Kientz and Barnes [7] inserted vertical rods into circular tanks to increase trout growth and feeding efficiencies. They also observed that rod effects were enhanced at higher water velocities [7]. They hypothesized that the improvements in trout growth in tanks with rods may have been due to changes in water velocities. However, the effects of such rod placement on within-tank velocities are unknown. Therefore, the objective of this study was to document the possible influence of vertical rods on the velocity pattern within circular tanks.

All measurements were recorded in a fiberglass circular tank (1.82 m diameter and 0.8 m deep, Figure 1) at McNenny State Fish Hatchery, rural Spearfish, South Dakota, USA filled with water to a depth of 0.585 m. The tank was either void of any structure, or contained nine vertically‑oriented rods (0.95 cm diameter × 57.15 cm long) suspended from a corrugated plastic cover on top of the tank with a space of approximately 23 cm between the bottom of the rods and the tank floor [7]. The rods were equally spaced approximately 11.0 cm apart, arranged into an array within a 15 × 40 cm area, and placed directly opposite of the spray bar. Each one had a surface area of 170 cm2. Water entered the tank via a spray bar inclined at 45° below the horizontal. 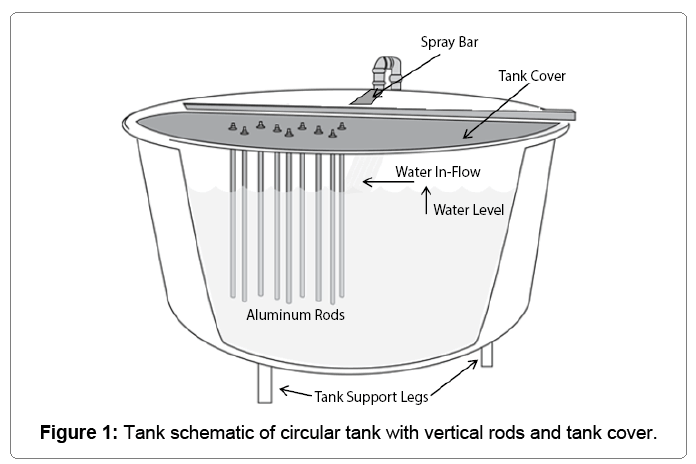 Water velocity was measured at predetermined points within the tank using a MF Pro DOC026.97.80211 (Loveland, Colorado, USA) meter. Flows of either 62 L/min or 113 L/min were used, and velocities were measured with both the presence and absence of vertical rods. Sampling locations (Figure 2) were identified as follows. Directly behind the spray bar was labeled as 0°, while the vertical rod structure was located across from the spray bar at 180°. Measurements were also taken at 270° and 90°. The rods were located at 180°, so no measurements were taken at this location when rods were present. At 0°, 90°, and 270°, measurements were taken at different radii and depths. The center was labeled as radii 0, with subsequent sampling locations 30 cm, 60 cm, and 90 cm from the center. At each radius (0, 30, 60, 90), velocity measurements were recorded at three depths, approximating the surface, middle, and bottom of the tank. The surface measurement was obtained at a water level of 55.0 cm from the bottom of the tank, the middle measurement at 27.0 cm, and the bottom measurement at 1.5 cm.

Data was initially analyzed by analysis of variance and covariance using the SPSS (9.0) statistical analysis program (SPSS, Chicago, Illinois, USA). Because of the large number of interactions, subsequent analysis used one-way analysis of variance and t-tests to examine just the effects of rods. Tukey’s mean comparison procedure was used for post-hoc analysis. The significance level for all tests was predetermined at P < 0.05.

At both flows, water velocity was significantly reduced by the addition of rods in the circular tank (Table 1). The depth and radii of the sampling location also had a significant effect on velocity in both flow treatments, while position only had a significant effect on velocity in the 133 L/min treatment. A large number of significant interactions among the rods and various sampling location metrics were also present. Minimal water movement occurred at radius 0 cm, in the center of the tank.

The presence of vertical rods in the tank significantly reduced velocities at each sampling depth, each position, and each radii (Table 2). These results were consistent, regardless of the water inflow. Within each flow treatment, neither depth nor position had any effect on velocity. However, velocity significantly increased from the center to the edge of the tank in both flow treatments.

Table 2: Mean (SD) velocity (m/s) from a 1.8 m diameter circular tank with or without the presence of vertical rods at two flow rates. Velocity measurements at three depths (surface, middle, and bottom), three positions [0°=spray bar (water inflow), 90° from the spray bar (prior to rods when present), and 270° (after rods, if present)], and three radii (30, 60, and 90 cm are the distance from the middle). Means from a specific flow rate in the same row with different letters are significantly different (P< 0.05).

Velocity was significantly decreased at nearly every sampling location when rods were added to the tank (Table 3). The largest decrease in velocity occurred on the surface of the water, midway between the center and edge of the tank (60 cm) after the rods (position 270°). This occurred with flow rates.

Table 3: Mean (SD) velocity (m/s) from circular tank locations prior to (90°) and after (270°) the position of vertical rods at different depths and radii from the center of the tank under two flow regimes. Means from a specific flow rate in the same row with different letters are significantly different (P < 0.05).

Despite the small size of the rods, their effect on velocity throughout the tank was pronounced. These results appear to validate the hypothesis of Kientz and Barnes [7] that the improvement in growth in tanks with rods was at least partially due to an energetic benefit from reduced velocity directly behind the array. It would also explain the more pronounced effects of rods at higher velocities observed by Kientz and Barnes [7]. While some water velocity has been shown to improve fish growth and feeding efficiency [8,9], higher velocities can lead decreased rearing performance [10,11] due to excessive energy requirements [2].

The water flow pattern observed in this study is similar to that reported previously. Timmons [3] also described an irrotational zone near the center of the tank. Oca and Masalo [2] stated that velocities in circular tanks decrease from the outer wall to the center of the tank, just as was observed in both flow treatments used in this study. Even though velocities were reduced by the presence of the verticallysuspended rods, there was still a large central vortex with both flows, just as was described by [4].

The results in this study may be unique to 1.8-m diameter tanks with the two water flows that were used. It is also likely that the size of the rods and their placement pattern in the tank influenced the results. Additional research should be undertaken with different sized circular tanks, different sized rods, and different rod patterns.

We thank Jessie Clark and Kelsen Young for their assistance with data collection, and Jamie Kientz for designing the tank schematic.