Frequency of Aphasia and Its Symptoms in Stroke Patients | OMICS International

Frequency of Aphasia and Its Symptoms in Stroke Patients

Copyright: © 2016 Azhar A, et al. This is an open-access article distributed under the terms of the Creative Commons Attribution License, which permits unrestricted use, distribution, and reproduction in any medium, provided the original author and source are credited.

Background: Every human uses language. Language is composed of understanding, expressing, finding the right words, reading and writing. If the damage occurs in language areas in the brain, then it can cause aphasia. Aphasia is a pure language disorder includes understanding, expression, writing and reading difficulties. Aphasia usually occurs suddenly, often as the termination of a head injury or stroke, but it may also grow slowly, as in the case of an infection, dementia and brain tumour. The disorder impairs the expression and understanding of language as well as reading and writing.

Objective: To determine the frequency of aphasia and its symptoms in stroke patients.

Material and methods: A cross sectional survey was conducted through questionnaire from Department of Neurology of Mayo, Sheikh Zayed, Lahore general and Jinnah hospital Lahore during January 2013 to June 2013. A sample of 162 Stroke patients was included in the study. The demographic details of the patients are male and female gender, age range between 25-70 years. A questionnaire was filled out based on history and clinical observation. All the collected data were entered into SPSS (statistical package for social sciences) for analysis.

Conclusion: The results of this study showed that the frequency of aphasia is 54.3% in stroke patients.

Aphasia can be defined as an acquired language disorder that occurs due to brain damage. The brain damage areas involve language expression and reception. Aphasia usually effects production and understanding of language. Aphasia also includes reading and writing difficulties [1]. Most people who acquire aphasia are in late or middle years. A stroke occurs when the brain is unable to receive blood supply. The co-occurrence of aphasia in speech disorder that also occurs due to brain damage includes apraxia and dysarthria [2].

There are two types of aphasia fluent aphasia and non-fluent aphasia. Some of the most common causes of aphasia are traumatic brain injury, epilepsy, stroke, and migraine [3]. The general symptoms of aphasia are paraphasia, disfluency, impaired comprehension, confronted repetition, anomia, reading and writing problems [4] Aphasia therapy improves person communication by helping the individual to restore his remaining language abilities as much as possible to compensate language problems [5]. Aphasia therapy includes both individual and group therapy. Individual therapy based on the specific needs of the individuals while group therapy focuses on the usage of new communication skills in a group [6].

A study carried out on natural history and associated deficits of aphasia after stroke. The symptoms were evaluated over different times during the study. After 6 months of stroke 12% patients have aphasia. There is a high relation between early and late aphasia scores [7].

The purpose of this research is to determine the frequency of aphasia in stroke patients. A cross sectional survey design was selected for this purpose. Simple random sampling was done. The stroke patients were selected from the neurology department of mayo, Sheikh zayed, Lahore general and Jinnah hospital Lahore during January 2013 to June 2013. Estimated stroke population in Pakistan is close to 250 per 100,000 populations. Based on stroke population in Pakistan, with 95% confidence level and 5% confidence interval Sample size of 162 stroke patients was taken [9]. They were selected on the basis of inclusion criteria. An inclusion criterion of the study was equal male and female gender of age ranges between 25-70 years having acute stroke.

A questionnaire developed from literature review and expert’s opinion was used from Assessment in speech language pathology a resource manual [10]. It includes medical history and aphasia symptoms. On the basis of data collected analysis was done with SPSS 16 to determine the frequency of aphasia in stroke patients.

This observational study was based on 6 months’ time period and 162 patients of stroke were studied. A questionnaire was used for each patient, which was filled out based on history and clinical observation. 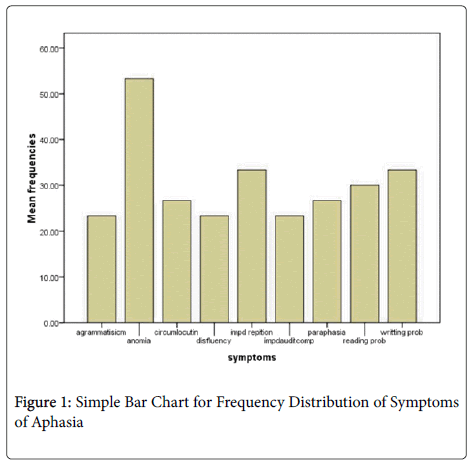 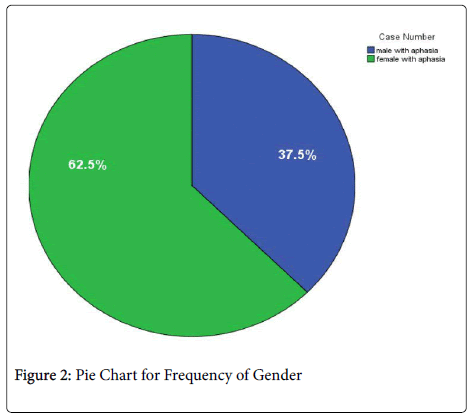 Another study conducted on relationship between the presence of aphasia and the severity of the stroke also supported the results of this study. The relationship between aphasia and severity of the stroke is assessed by other measures such as loss of functional independence. Findings indicated as aphasia occurred in about one quarter of conscious patients soon after stroke [12].

It was concluded from the study that aphasia was present in half of the sample population. Aphasia is more in female than male. It is more common in age group of 55-70 years.