Copyright: © 2015 Parés-Casanova PM. This is an open-access article distributed under the terms of the Creative Commons Attribution License, which permits unrestricted use, distribution, and reproduction in any medium, provided the original author and source are credited.

The existence of sexual dimorphism in the White Rasquera goat breed has long been known, with males being larger than females. However, no study so far has explored this dimorphism separately in its size and shape components. Here we analysed twenty-three skeletonized skulls from adult animals (11 males and 12 females) belonging to this breed by means of geometric morphometric (GM) methods using 7 landmarks on dorsal aspect. Differences observed between the sexes are size related, with males bigger than females. Shape is also an important component separating males from females. The difference in skull form between sexes may be interpreted in relation to extensive management styles of the animals: being under a low anthropogenic influence they tend to reinforce their natural sexual size dimorphism. This being the first known study to apply GM to a domestic goat breed, we advocate for further GM research in domestic breeds in order to have the possibility of comparing populations and easily exchanging information between research centres.

GM analyses the relative positions of anatomical landmarks and sets of points used to approximate curves (outlines) and surfaces to quantify size and shape [8]. These techniques offer an advantage over traditional analyses of linear morphometrics in that the geometric shape space presents all various shape configurations of designated landmarks [1,4,9]. The geometric information of shape differences is preserved, statistical power is increased [10] and patterns can be visualized using image rendering and a variety of other diagrams [11]. In taxonomy and other fields, genetics and morphometrics can fruitfully interact as complementary tools to understand the origin of phenotypic differences [12]. The rise in publications using GM outside biology has been exponential and pays testament to the success of this set of methods but this type of analysis has not yet been extensively performed in domestic mammals.

Goats are sexually dimorphic animals, with a general pattern of males being larger than females. Most of the research on this species has been done on a purely biometric basis of linear measurements, so the animal ethnologist interested in focusing on shape, separately from size, can have difficulties on testing hypotheses about shape differences.

The White Rasquera goat breed is a racial grouping located in the Southern region of Catalonia (NE Spain). This breed is very similar to the White Celtiberica one, a population of meat aptitude bred to produce kids. Being both sexes horned, animals show a strong sexual dimorphism, as well as remarkable morphostructural variability within genders. The breed has great rusticity and is perfectly adapted to local orographic and weather conditions [13]. Until now, all morphological researches with this breed have been done at a lineal morphometric level [13,14]. So this research was intended to assess differences in sexspecific skull shape based on 2D GM.

Twenty four skeletonized skulls from pure-bred animals belonging to the White Rasquera breed were initially sampled from a private local collection. We selected only adult specimens with known sex. To obtain comparable results across groups and across anatomical regions, an initial balanced sample of 12 males and 12 females was studied. All animals were adults (the tooth row was employed as an age criteria thus only animals with all permanent teeth erupted were selected) [15]. Care was taken to avoid specimens lacking major parts and to obtain good quality pictures so a male specimen was excluded from research and 23 skulls were finally studied.

For the analysis of differences between sexes related to size and shape of the skull, we used GM. Skulls were dorsally photographed. Image capture was performed with a tripod-mounted Nikon® D70 digital camera (image resolution of 2,240 × 1,488 pixels) equipped with a Nikon AF Nikkor® 28-200 mm telephoto lens. The focal axis of the camera was parallel to the horizontal skull plane and centred on its dorsal aspect. A ruler was used in this process (interval 1 mm). Skulls were photographed once with the same procedure. The dorsal aspect is an interesting structure in domestic breed studies as, although anatomical landmarks are not numerous, it is where linear measurements are normally obtained in order to establish cephalic indices for ethnological classification. All images were saved on JPEG format and stored in a personal computer.

Morphometric analysis must be based on unambiguous and repeatable anatomical marks. Our chosen landmarks represented different points from the neurocranium and viscerocranium (facial skeleton) and were selected because of the ease of their location on fixed bony points; moreover they were not “masked” by the large horns that characterize this breed. Seven landmarks were collected for each individual. In order to avoid redundant information only the right side of cranium was used (Figure 1): (1) akrokranion (medial point on the os supraoccipitale), (2) ectorbitale (point of the greatest width in os frontale), (3) facial crest, (4) facial tuberosity, (5) premaxilla (widest part), (6) nasion (the intersection of the frontal bone and two nasal bones), and (7) prosthion (the most anterior point in the midline on the alveolar process of the maxilla). Two additional landmarks spaced 40 mm apart were also included for scaling (Table 1). 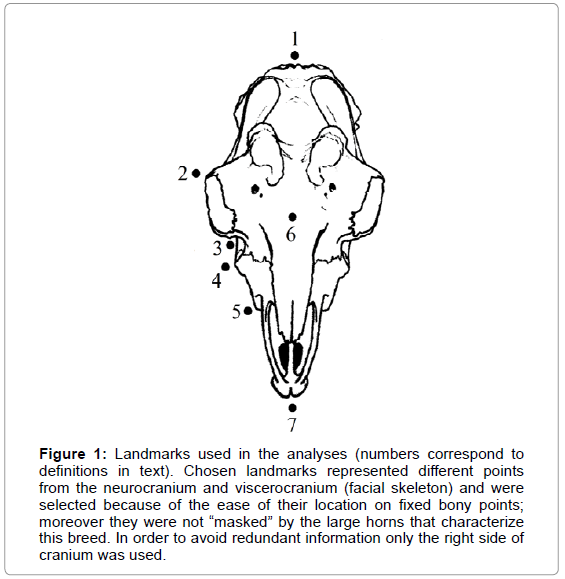 Figure 1: Landmarks used in the analyses (numbers correspond to definitions in text). Chosen landmarks represented different points from the neurocranium and viscerocranium (facial skeleton) and were selected because of the ease of their location on fixed bony points; moreover they were not “masked” by the large horns that characterize this breed. In order to avoid redundant information only the right side of cranium was used.

We used the software TpsUtility 1.50 [16] to organize the images. Landmarks were digitized using TpsDig 2.04 [17]. Shape variables were obtained as linear combinations of the original landmark coordinates after standardizing size and removing artifactual variation due to different positions of the specimens during the process of data collection (generalized Procrustes analysis). Landmark positions were converted to scaled x and y coordinates using CoordGen6f [18]. CoordGen6f was also used to translate and rotate images. We saved centroid size (CS) to be used as a measurement independent of shape [19], which is the square root of the summed distances between each landmark coordinate and the centroid of the landmark configuration [20]. Shape differences were visualized with deformation grids, where one object (reference) is deformed into another (target) and shape features can be described in terms of deformation grids depicting the differences between objects [11]. The thin plate spline algorithm was used to compute the deformation grid with the least bending energy between the reference and target landmark configurations.

Landmarks were digitized twice. Profile plots of the landmark coordinates were used to detect landmarks with relatively large variations between repetitions. The two repeats tend to cluster together; bit correlation between the matrices of Procrustes distances from each of the repetitions was very high (Mantel test r=0.723, p=0). Digitizing error was considered, therefore, negligible.

To assess differences in shape between sexes, principal-components analysis (PCA) on the covariance matrix and discriminant function analysis (DFA) were performed. PCA was used to display variation within a sample, to characterize the main features of shape variation and as an ordination method. Shape variables were regressed onto the first two PCA axes to illustrate shape changes along them. DFA was used to separate sex groups. It provides an ordination that maximizes the separation of the group means relative to the variation within groups and emphasizes the degree of separation of the groups and not, as in canonical variate analysis, the relative arrangement of multiple groups. Accordingly, more emphasis is placed on the probability of correct and incorrect classification of observations. In order to compare sizes (CS) between sexes, values were log-transformed. The Mann-Whitney U test was used for significant differences in log CS medians between sexes and the Kolmogorov-Smirnov D test for overall equal distribution of two sex samples (for both cases using CS, as it does not assume normal distribution). Multivariate ANOVA (MANOVA) was done in order to compare shape between sexes. As size affects the skull and can inflate measures, we explored the effect of allometry by computing a multivariate regression of shape on log CS. To adjust for size-shape differences we repeated the analyses using the residuals of the multivariate regression CS was considered the independent variable. This regression allowed us to correct for the effects of size on shape (allometry). The Mann-Whitney U test was used to test for significant differences in allometric slopes and intercepts between sexes and the MANOVA to test differences in regression scores between sexes. Using the residuals from a regression of shape on centroid size was the method to correct for the effects of allometry. Significance was accepted at p 0.05 level.

No specific permits were required for this study as it did not involve neither slaughtering animals nor collecting endangered or protected organic parts. 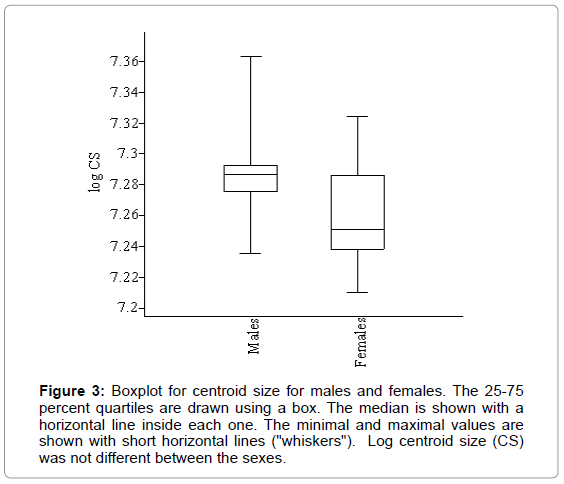 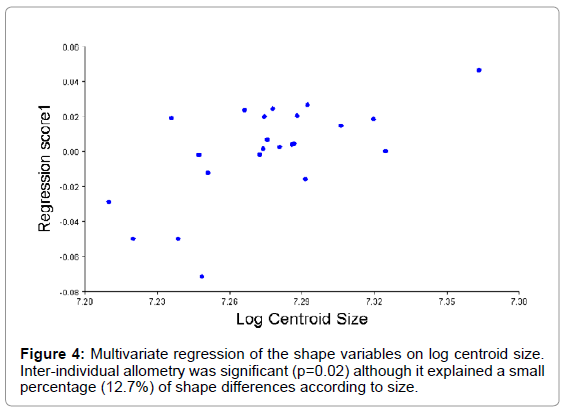 Figure 4: Multivariate regression of the shape variables on log centroid size. Inter-individual allometry was significant (p=0.02) although it explained a small percentage (12.7%) of shape differences according to size.

We can draw some preliminary conclusions as to the level of significance of shape and size variations in White Rasquera adult animals. First of all, the very small error demonstrated that the proposed landmarks can be located with precision and images were acquired with accuracy despite the lack of flatness of the dorsal cranial plane. The analyses of the univariate size measurements and multivariate shape data clearly show that the breed is sexually dimorphic for head size and shape, having males a larger skull. Allometry reveals that shape differences are not simply due to allometry. The anatomical separation of the skull into viscerocranium and neurocranium is due to functional separations within both regions (i.e. the facial skeletal morphology develops and responds to visual, olfactory and masticatory soft tissues and functions, whereas the neurocranium mainly responds to CNS growth and vascularization while functioning to protect the brain) and being the face where most sexual changes appear.

Sexual dimorphism (SD) is a widespread phenomenon in different animal taxa, including the subfamily of goats and sheep (Caprinae), which belongs to the most dimorphic mammalian groups [23]. Rensch's rule describes the pattern of sexual dimorphism, claiming that larger species generally exhibits higher male to female body size ratio [23,24]. Agreement with Rensch's rule has been manifested by slope of the allometric relationship between male and female skull size exceeding one. The existence of SD in the White Rasquera breed has long been known, males being larger than females [13], perhaps due to the fact that being under a low anthropogenic influence they tend to reinforce their natural sexual size dimorphism. However, no study so far had explored this dimorphism separately in its size and shape components and focused on skull. Here, we exploited both size and shape to gain insights into skull SD for his breed. An interesting side issue to our study is that if size is excluded from the analysis, individuals may be grouped for sex.

This is the first known study to apply GM to a domestic goat breed, so comparisons of our data to other published sources are not possible. We advocate for further GM research in domestic breeds in order to have the possibility of comparing populations and easily exchanging information between research centres.

Author must thank to the local farms where sampling of skulls were kindly allowed. Too to Josué Sabaté, who was responsible to collect, clean and photograph the specimens. We thank finally the anonymous reviewers whose comments helped to enhance the overall quality of the manuscript.