Copyright: © 2016 Olufelo OS, et al. This is an open-access article distributed under the terms of the Creative Commons Attribution License, which permits unrestricted use, distribution, and reproduction in any medium, provided the original author and source are credited.

The use of finfishes as indicators of aquatic quality and health have been suggested because many observed physiological and anatomical changes, often manifest a form of stress compensating response [1]. These compensating responses classified from primary to tertiary responses; usually divert energy from critical processes .

Ogun River is one of the perennial rivers found in southwest Nigeria. It rises at approximately 8°41’N, 3°28’E with altitude of 380 m flowing for 320 km southwards into Lagos lagoon at approximately 6°35’N, 3°25’E. It has a total drainage area of about 21,800 km2. Detailed information on hydrology had been provided by Sydenham [2,3]. The degradation the river health increased with the construction of abattoirs at Lafenwa and Isheri-Olofin along the river course with capacity to process 300-320 cows and 40-50 goats/rams daily. The offal and processing wastes are washed directly into river system daily.

The river rises in Oyo State near Shaki at coordinates 8°41′0′N 3°28′0′E and flows through Ogun State into Lagos State. The river is crossed by the Ikere Gorge Dam in the Iseyin local government area of Oyo State. The reservoir capacity is 690 million cubic metres (560,000 acre·ft).

Significant difference between sexes was observed only for GI in C. gariepinus (Table 5). Regression equations for males, females and the pooled sexes of all the species are presented below: 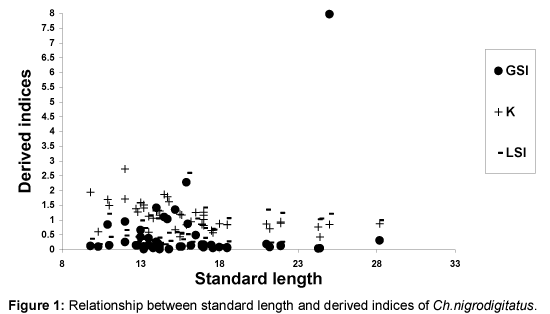 Figure 1: Relationship between standard length and derived indices of Ch.nigrodigitatus. 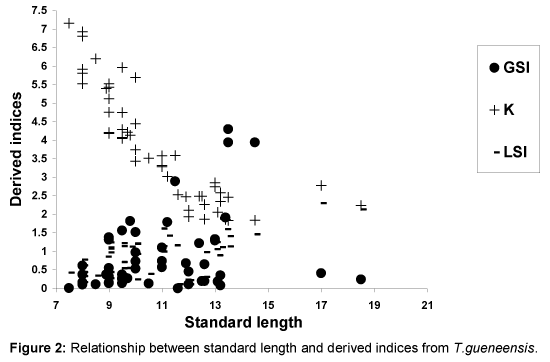 Figure 2: Relationship between standard length and derived indices from T.gueneensis. 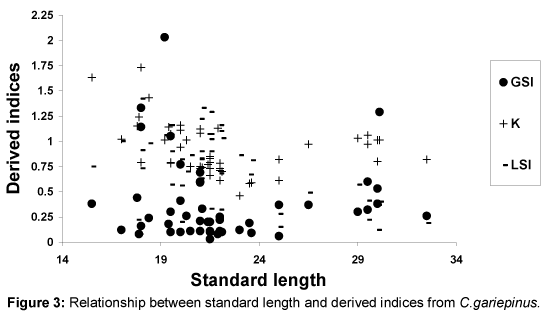 Figure 3: Relationship between standard length and derived indices from C.gariepinus. 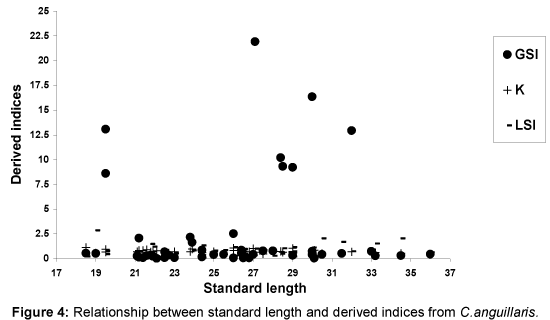 Figure 4: Relationship between standard length and derived indices from C.anguillaris.

Summary of physico-chemistry of abattoir wastes and river Ogun at Lafenwa and Isheri-Olofin respectively is presented on Table 6. Temperature of 31°C and 29.5°C and pH of 6.8 and 7.8 were recorded at the respective locations. Isheri-Olofin recorded higher Total Dissolved Solids (TDS) (1700 mg/l) and conductivity (220 mg/l) compared with Lafenwa (600 mg/l and 147.5 mg/l). DO concentration from water (7.20 and 3.14 mg/l) compared with higher BOD values from the wastes (15.6 and 13.92 mg/l). Nutrient parameters of nitratenitrogen (NO3-N), ammonia-nitrogen (NH3-N) and phosphate (PO4 3-) differ greatly between the two locations. NO3-N and NH3-N was higher at Isheri-Olofin, but PO4 3- concentration was higher (22.23 mg/l) at Lafenwa. Concentrations of trace metals were elevated at Isheri-Olofin. Zinc (Zn) had the highest concentration of 18.25 mg/l and mercury (Hg) the least of 0.089 mg/l. Concentrations of Manganese (Mn) recorded the least 0.074 mg/l and Iron (Fe) the highest of 0.195 mg/l at Lafenwa. Copper (Cu), Lead (Pb) and Mercury (Hg) were not detected in the effluent from Lafenwa.

The presence of unwanted materials in aquatic environment has been known to cause subtle or robust damages to aquatic life forms effects of which can be used to detect spatio-temoral changes and distribution of the pollutants [18-22]. This is because the ultimate effect is biotic integration into body mechanisms.

Fish growth is considered a good indicator of fish and aquatic health because it manifests the influence of biotic and abiotic variables from the inhabited environment [14,23]. Bonga stated that growth rates reflect food availability, appetite and consumption, intestinal uptake and metabolic rates, all of which can be influenced by stressors [1].

Fish species from our study were apparently affected by the prevailing water condition as shown by reduction in growth indices (TL, SL and TBW) compared with reports on Ch. nigrodigitatus [24- 30]; T. guineensis [26,31]; C. gariepinus [32-36] and C. anguillaris [37]. Adebisi in his studies recorded a range 10.40 -58.20 cm in TL for fishes from Ogun river, although none of the species in our own study was included, this differ from a range of 10.00-41.00 in our study [6]. Further supporting our submission of steady reduction in sizes of fishes resident in Ogun river.

While it is important not to overlook gear selectivity as suggested by Fagade [26]. The possibility of gear selectivity as size factor simultaneously for species in this study is severely limited. Disturbance in body mechanisms possibly due to chronic organic pollution appeared a more viable determining factor.

Liver as a growth indicator is sensitive to food intake in fishes under variety of environment, especially stressed conditions and pollution impacts [14,37,38]. Differences in liver weight among sexes, as observed in this study, had been previously suggested [39-41] as indicative of allocation of resources to gonad development in females.

Reduction in reproductive potential was apparent in Ch. nigrodigitatus, T. guineensis and C. gariepinus compared values reported by Fagade [25,26,29,30,42]. Similar conclusions were difficult to draw for and C. anguillaris due lack of previous reports. However, when compared with post-oil spill reports of Ekwu [42], probability of reduction in reproductive potential is high because the values were not so incongruous. Effects of oil pollution are severe, immediate and obvious, unlike subtle and cumulative nature of organic pollution.

GSI reported for C. anguillaris was low compared values reported by Ekwu [42] for C. gariepinus, a comparable fish species. In contrast to observations on cichlids having reduced GSI due frequency of spawning, as reported by Adebisi [6] and Ekwu [42], only C. anguillaris had higher GSI compared with T. guineensis.

Information on gonad weights in males from earlier reproductive studies involving species used in this study was not available.

Reduced fecundity is regarded as robust indicator of toxicity, because agents of pollution interact with endocrine control mechanisms of reproduction [1,38].

T. guineensis recorded the highest K value in our study, comparable only to the minimum (K=3.77-5.30) reported by Fagade [26] for the species. Present conditions [14,37], past condition [37] nutritional status [37] and environmental stress [14,42,43] have been clearly linked to low or reduced K. This shows that fishes from our study were not in the desirable condition.

C. gariepinus was the only species with previous reports of LSI which Tsadu and Adebisi [32] as a measure of food availability. LSI of C. gariepinus from our study were clearly elevated. The sensitivity of liver to environmental changes [37,44-62] and pollution [14,38] greatly influence Lwt and LSI.

The remaining derived indices of GI, VSI and PDO have not been reported for the species under study or used as indicator of aquatic health.

GI combines information on fecundity and length weight relationship, signifying the magnitude of alteration in resource allocation in fish, due to integration of pollutants. This was however extended in this study to include both sexes. The influence of sex is shown by difference of the GI value from gonad weight (Tables 2-5). Schulz and Martins-Junior [15] reported GI values for Astyanax fasciatus only females. Variations in GI in our observations probably reflected the toxic effects of pollutants on fecundity as suggested by Wandeerlar-Bonga [1].

The extent of lipid storage in the viscera of individual fish is described by VSI and PDO. The high values of PDO of above 50% in all cases indicated some consistency in energy allocation, with highest allocation by Ch. nigrodigitatus and least by T. guineensis.

The Length-Weight Relationship (LWR) reported clearly defined the diversed body configuration associated with fish species from Nigerian waters in agreement with King [28], Fafioye and Oluajo [36]. C. anguillaris for both sexes and pooled and, C. gariepinus females clearly approximated allometric growth. However, Ch. nigrodigitatus and T. guineensis in all cases have the tendency to become thinner with size. This was also the case with C. gariepinus males and pooled [12]. Tsadu and Adebisi [32] reported similar sexual differences growth configuration in C. gariepinus. In contrast Ch. nigrodigitatus (b=3.042 ± 0.003) and C. gariepinus (b=2.880 ± 0.15) populations from Epe lagoon were apparently allomeric in their growth configurations.

The observed reduction in size as with other body indices can be associated with immediate environment. It is therefore possible that reallocation of metabolic resources away from growth towards activities requiring intensification to restore homeostasis [1]. This continuous reallocation towards homeostatic balance, under prevailing conditions, could be responsible for the observed variability in relationships between length and derived indices.

The prevailing conditions in Ogun river has changed over time, as evident by differences of physico-chemical parameters compared with Adebisi [6], Odukoya [47], Asonye [10] and Jaji et al. [9]. The limited abiotic measurements previously reported on Ogun river were within allowable Nigerian limits with some exceptions from Asonye et al. [10]. Our study departed significantly, because more parameters were evaluated most of which exceeded USEPA [48] and NESREA [49] limits. NH3-N and PO4 3-, two of parameters for detecting organic pollution [50] were above allowable limits in both wastes and aquatic life for all locations. This was similar to observations of Osibanjo and Adie on Bodija abattoir Ibadan, Southwest Nigeria (NH3-N=62-159; PO4 3-=142-180). The presence of NH3-N at elevated concentration may reduce growth, fecundity and survival of fishes [51-53], although toxicity is influenced by actions of pH and presence of certain heavy metals [51,53].

The effects of excessive PO4 3-on fish species are indirect, either via enhanced production of blue-green algae which is of low nutritive value to most fishes [51,54] or plankton die-offs after a bloom [51]; Pearl and Tucker, associated with peak-fall cycle of nutrients [21,51,54]. The effect is reduced DO from high BOD requirement of decomposition with many physiological implications for fish species [51,52]. Similar observations were reported from Orogodo river, South-south Nigeria, due to inputs of abattoir wastes [56], while elevated conductivity in Delimmi river Jos Nigeria, was traced to organic pollution [57-73].

Indices from finfishes as environmental sentinel is a robust and premium tool with an advantage of being inexpensive. The results from this study indicated that Ogun river is under stress from organic loading associated with the abattoirs from Lafenwa and Isheri-Olofin. Ch. nigrodigitatus, T. guineensis, C. gariepinus and C. anguillaris manifested this aquatic stress differently for comparable parameters. However the paucity of information on this aspect of the species created some difficulties in establishing benchmarks. Further evaluations of the species used in our study, and other abundant but less economically important species as observed in the use of fishes as bioindicators in other part of the world is highly desirable.