Patients and methods: We retrospectively reviewed 83 patients who given irinotecan-based second-line chemotherapy for extensive-stage SCLC. Survival curves were plotted using the Kaplan–Meier method. The Cox proportional hazard model was used for multivariate analysis.

Although SCLC is a quite chemo sensitive malignancy with overall response rates of 60–80% in patients with extensive stage disease. Most patients relapsed within a year of initial treatment and most of them eventually died from disease progression [1]. Despite the high response rates observed with first-line treatment, the median survival from the time to progression was ranged from 3 to 5 months in the second-line or further-line treatment [2-4]. In an effort to achieve higher survival rates in this destructive disease, the novel agents such as topotecan [5], docetaxel [6], paclitaxel [7], Irinotecan [8], and gemcitabine [9] have been introduced in second-line treatment.

Irinotecan is a hemisynthetic product of camptothecin and shows strong antitumor activity by inhibiting DNA topoisomerase I. A randomized phase III study comparing etoposide-cisplatin (EP) with irinotecan-cisplatin (IP) in first-line treatment Japan patients with extensive-stage SCLC showed that IP was significantly superior to EP in both response and survival [10]. Both of the EP and IP regimen are thought to be standard first-line regimens for extensive-stage SCLC now-a-days. In the second-line setting, irinotecan monotherapy and doublet chemotherapy showed a promising results in several studies. However, most of the trials were from phase II or retrospective study with a small number of patients enrolled [11-13]. The effects and toxicities data comparing the single-agent chemotherapy with doublet chemotherapy as second-line treatment are lacking.

In current study, we compare the effects and toxicities in SCLC patients treated with irinotecan monotherapy versus irinotecan plus platinum combination agent and aim to provide an information for standard second-line chemotherapy.

Survival was recorded from the first day of treatment to the date of death or that of the last follow-up visit. The PFS encompassed the time from the first cycle of second-line therapy to documented progression or death from any cause. The survival curves were calculated according to the method of Kaplan-Meier. The log-rank test was used to compare PFS time between the single-agent chemotherapy and combination chemotherapy. The Cox proportional model was used to evaluate various prognostic factors. Values of p

All patients were given Irinotecan 60 mg/m2 as a 10-min intravenous infusion on day 1,8,15 every 21 days. No more than six cycles were used for patients with efficacy. Other drugs concurrent with Irinotecan was according to the package inserts of drug.

Tumor responses were assessed with computed tomography (CT) every two cycles, or were evaluated early when significant signs of progression appeared. Objective tumor responses were according to the Response Evaluation Criteria in Solid Tumors (RECIST 1.1). Objective tumor responses include as complete response (CR), partial response (PR), stable disease (SD) and progressive disease (PD). Disease control rate (DCR) was defined as the addition of objective response and stabilization rates (CR+PR+SD). Objective response rate (ORR) included the CR and PR. Toxicities were checked every cycle throughout the second-line therapy. All toxicities were evaluated according to the National Cancer Institute Common Toxicity Criteria version 3.0 (CTC3.0).

All the patients that were evaluated for the second-line tumor response had a PFS. Two patients were lost to follow-up, and their overall survival information was not included. Follow-up rate was 97.6%. The median follow-up period was 15.6 months (2.0-48). The last follow-up time was June 31, 2012.

There were 916 SCLC patients who received chemotherapy in our hospital from Jan 2000 and June 2011. Six hundred and fifteen (67.1%) patients had extensive-stage SCLC. Of these patients, 233 (37.9%) patients had received second-line for further treatment. Two hundred and twenty-one could evaluate the clinical efficacy. Irinotecan-based single or doublet accounted for 37.6% (83/221).

Table 1: Comparison between the single-agent and combination chemotherapy in the second-line treatment.

Efficacy in the single-agent group and doublet group 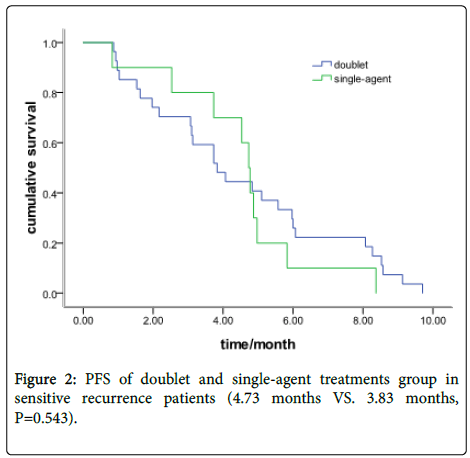 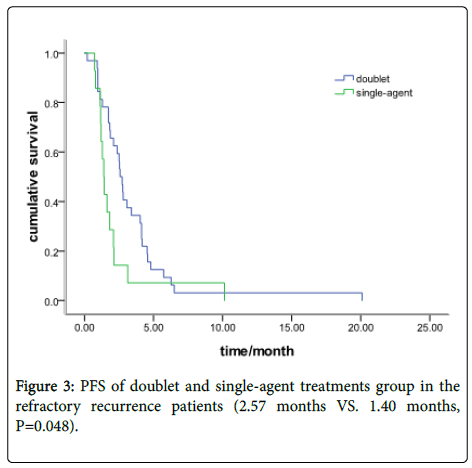 Univariate analyses and COX regression analysis in the second-line treatment

Univariate analyses were performed by the Kaplan-Meier method to assess the predictive capability of each variable influencing PFS of second-line treatment. Gender, age, smoking, chemotherapy regimen (single-agent or doublet treatment), were not found to be statistically associated with PFS in second-line treatment. Recurrence type, performance score (PS) and response to first-line were predictive of PFS (Table 3).

A multivariate Cox regression model was constructed with the incorporation of gender, age, smoking, PS score, response to first-line and recurrence type to evaluated the OS from the starting of secondline treatment. PS score (P=0.012), response to first-line (P=0.035), recurrence type (P=0.042), remained as independent prognostic factors, but, sex (P=0.819), age (P=0.951), smoking (P=0.465) and chemotherapy regimen (P=0.320) did not have significant influence on survival in multivariate analysis (Table 4).

All patients in second-line treatment were assessed for toxicity. Five patients refused further therapy due to severe toxicities (one anemia, one neutropenia, three diarrhea) and four changed from doublet to single drug treatment. The overall rate of grade III/IV toxicity was 63.9%. Single-agent chemotherapy was 45.8% (11/24), and doublet group 71.2%, (42/59) .There were significant difference between single agent arms and doublet therapy group (P=0.029).

Of the 83 patients, 56 (41 in doublet and 15 in single arm) had cancer-related symptoms at initiation of second-line treatment. Most frequent symptoms included; cough (57.1%, 32/56), dyspnea (25patients), chest pain (17 patients) and other symptoms that included bone pain, hemoptysis and fatigue. Twenty-seven patients had no symptoms and disease was confirmed by imaging examination. Partial or complete symptom relief was observed in 43 patients (33 in doublet and 10 in single arm) during chemotherapy and 13 patients had no improvement. There were no difference in Cancer-Related Symptoms improvement between the doublet and single arm (P=0.36).

In practice, clinicians usually would like to use a platinum combination therapy as an option for second-line treatment in order to improve the treatment efficacy when the patients could tolerate the toxicity in non-small cell lung cancer. However, combination agent may lead to more prominent hematological toxicity and gastrointestinal reactions in some patients, which may affect patients quality of life to varying degrees. A meta-analysis in 2009 showed that combination with platinum in the second-line chemotherapy increased the PFS but not OS compared with single-agent chemotherapy in nonsmall cell lung cancer [14]. Considering the different biology characteristics, there may be some difference in second-line treatment of SCLC.

Irinotecan-based doublet chemotherapy has been investigated in several studies [15-17]. In the study conducted by Ando et al, 25 patients who had previously been treated with etoposide and a platinum-containing regimen were enrolled, and 20 patients achieved PR with IP regimen [18]. Naka et al. conducted a phase II study with weekly IC (Irinotecan and carboplatin) regimen, the ORR was 31.0% among the 29 patients, and there was no statistical significance in the response rate between the sensitive and refractory group [19]. In the study conducted by Sevinc et al., patients were treated with irinotecan. Of 46 evaluable patients, the overall response rate of 11.4% and DCR was 17.5% [20]. In current study, there was no significantly difference in ORR and DCR between the single-agent and doublet group. In the refractory recurrence group, there was an advantage in doublet than single-agent chemotherapy in prolonging PFS of second-line chemotherapy. In the sensitive recurrence group, there was no difference regardless of PFS and response rate.

The major limitations of the present study were its retrospective nature and small number of patients. Less than one third patients received single-agent Irinotecan chemotherapy. However, it provides relevant insight into the efficacy of Irinotecan-based second-line treatment of SCLC.

Copyright: © 2016 Cheng G, et al. This is an open-access article distributed under the terms of the Creative Commons Attribution License, which permits unrestricted use, distribution, and reproduction in any medium, provided the original author and source are credited.