Copyright: © 2017 Ahmad V, et al. This is an open-access article distributed under the terms of the Creative Commons Attribution License, which permits unrestricted use, distribution, and reproduction in any medium, provided the original author and source are credited

Tuberculosis (TB) caused by Mycobacterium tuberculosis has been identified as a remerging infectious disease with public health importance globally. Exploitation of better diagnosis techniques for precise isolation of mycobacteria in clinical specimens is of great importance to improve the diagnosis as part of the global TB control efforts. Contamination of broth cultures of acid-fast bacilli (AFB) by bacterial species other than Mycobacterium species frequently occurs. Many of these contaminated cultures require re-decontamination and re-incubation before the appropriate tests can be performed for identification. This study aimed at the isolation/recovery of M. tuberculosis from contaminated MGIT tubes by making minor modification to the standard protocol and access whether the modification has any impact on recovery rate. Among all confirmed 451 mixed growth positive cultures, 89.57% were culture positive (positive for MTBC), 3.80% were culture negative, 4.65% were culture contaminated and 1.99% were found NTM.

Tuberculosis remains a major cause of morbidity and mortality worldwide. Rapid and accurate detection of the Mycobacterium tuberculosis complex (MTBC) is a key aspect of effective tuberculosis treatment and control [1].

Despite the availability of molecular tests for early diagnosis, isolation of M. tuberculosis with use of culture of acid-fast bacilli (AFB) is still necessary owing to its higher sensitivity for the recovery of isolates for antimicrobial susceptibility testing. But Achilles heel of culture is the long time to results, which is a consequence of the long doubling time of M. tuberculosis [2].

The Mycobacterial growth indicator tube (MGIT) system, introduced one decade ago, is part of the new-generation of rapid tests for isolation and detection of mycobacteria.

MGIT 960 system has the advantage of high throughput (960 samples can be tested in one instrument), rapidity (4-13 days) and easier interpretation of results [3]. The technique is based on fluorescence detection of mycobacterial growth in a tube containing a modified Middlebrook 7H9 medium together with fluorescence quenching-based oxygen sensor [4-6]. While many studies have shown the superiority of MGIT 960 system for recovery of mycobacteria, this system has also demonstrated high contamination rates ranging from 1.9 to 30% [7]. While most of the contaminated MGIT 960 tubes contain only the true contaminants, some of the tubes may also contain species of M. tuberculosis along with other contaminants. In order to isolate M. tuberculosis from other contaminants, such MGIT tubes need to be decontaminated again, this process is called Re-Decontamination (RD) [8]. The available literature on RD using standard protocol shows low recovery rate of M. tuberculosis. Therefore, this study was done with for isolation/recovery of M. tuberculosis from contaminated MGIT tubes by making minor modification to the standard protocol and access whether the modification has any impact on recovery rate.

The present study was conducted at New Delhi Tuberculosis Centre (NDTBC) over a period of two years, i.e., from July 2014 to September 2016 after prior approval from institutes Ethical committee. Laboratory of New Delhi Tuberculosis Centre serves as an Intermediate Reference laboratory for Delhi state and receives samples from various chest clinics for detection of MDR TB and also Drug Susceptibility testing (DST) for second line drugs. These specimens were collected either from suspects of MDR TB or from MDR TB patients undergoing treatment.

Sputum specimens were processed by N-acetyl L-cysteine–sodium hydroxide (NALC-NaOH) method (final NaOH concentration, 1%) [8]. The concentrated sediment was re-suspended in 2 ml sterile phosphate buffer solution (pH 6.8) and 0.5 ml of all decontaminated specimens was inoculated on to MGIT 7H9 broth medium for MGIT 960 liquid culture. These vials were incubated at 37°C in MGIT 960 system. Positive flagged MGIT tubes were further processed for ZN smear microscopy and purity check by doing subculture on BHI plate prior to reporting.

Cultures which showed typical cord formation in ZN smear microscopy but also showed growth on BHI plates were identified. A total of 451 cultures with mixed growth were obtained during the study period. These BHI and smear positive cultures were then Re-Decontaminated using 6% NaOH was used instead of 4%. Briefly, entire culture from the contaminated tube was transferred into fresh 50ml falcon tube, care was taken if any fungal ball present in the culture tube and they were removed with the help of pasture pipette. An equal volume of NaOH-citrate solution without N-acetyl-L-cysteine (NALC) (final concentration 1.5%) was then added to the tubes and the tubes were hand mixed for about 15-20 s (avoiding vortex to minimize the froth). The tubes were then allowed to stand at room temperature for 15 min. After 15 min phosphate buffer was added (pH 6.8) up to the 50 ml mark of the centrifuge tube. The specimen was then mixed well and centrifuged at a speed of 3000 g for 20 min. The supernatant was discarded and the pellet was re-suspended in 1.0-1.5 ml of phosphate buffer (pH 6.8). 0.5 ml of this concentrate was then inoculated into MGIT 960 tubes, containing Middlebrook 7H9 with the supplement, BBL MGIT OADC (oleic acid, albumin, dextrose and catalase), and BBL MGIT PANTA (polymyxin B, amphotericin B, nalidixic acid, trimethoprim and azlocillin) as recommended by the manufacturer. MGIT 960 tubes were incubated and automatically monitored in the MGIT 960 instrument. Growth of mycobacteria was then again verified by microscopy (Ziehl- Neelsen) and MPT64 lateral flow assay test (SD Bioline, USA). 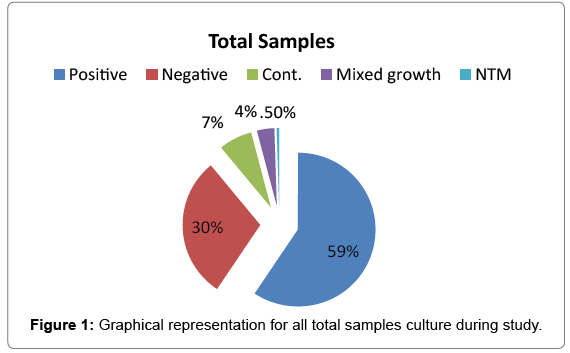 Figure 1: Graphical representation for all total samples culture during study. 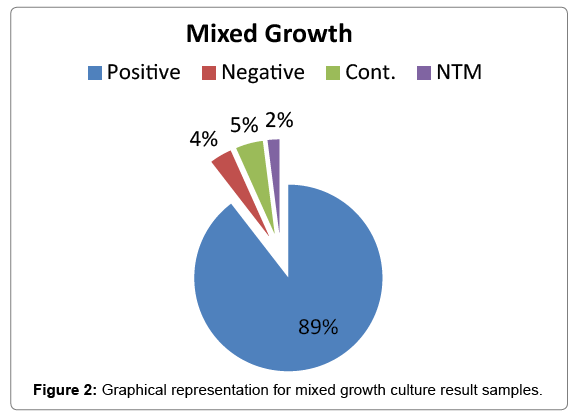 Clinical specimens from non-sterile body sites such as sputum in the laboratory for TB culture and DST, are subjected to a pretreatment involving digestion, homogenization, decontamination and concentration to eradicate more rapidly growing contaminants such as normal flora (other bacteria and fungi) while not seriously affecting the viability of the mycobacterial which grow slowly [9]. Among the different methods available, The N-acetyl-L-cysteine (NALC)-NaOH method has recently become one of the most widely used processing methods in many countries and Mycobacterial Growth Indicator Tube (MGIT) system and LPAs are validated with this method [10,11]. The main reason behind the wider use of this method is that it results in more stringent pH control than other processing methods and creates an environment that is less harmful to the organism and is indispensable for avoiding false fluorescence of the indicator used in the MGIT system [12]. But, there is evidence that even the mildest decontamination methods, such as the widely used NALC-NaOH method, can kill about 33% of the mycobacteria in a clinical specimen, while more overzealous methods can kill up to 70% of the mycobacteria [9].

As per guideline, earlier we used 4% NaOH procedure for redecontaminating of mix culture positive MGIT cultures and the results showed 42.4%, contamination rate 48.4% and 9% was culture negative. Further, in this study by increasing final concentration of NaOH to 6%, we observed that all potentially pathogenic mycobacteria grew well after re decontamination. Almost 90% of success rate was achieved with this modification, which is an outstanding figure considering its importance in patient care management. This enabled to save lot of time as in case of contamination another sample is to be collected and processed which is an inconvenient process. In this study, Drug susceptibility testing was done for all the isolates and the results were communicated to the treating physicians in time to take further course of action for proper treatment.

Since quality test results require quality specimens, the accurate and rapid diagnosis of TB and other mycobacterial infections depend upon proper specimen collection and rapid transport also to the laboratory [13].

In this study sample collection was done by trained technicians who ensured collection of good quality samples. Samples were transported to the laboratory on same day of collection by relatives or friends of suspects and therefore cold chain transportation was not used.

Since early detection of M. tuberculosis and also its drug resistance pattern is an important issue for clinical Mycobacteriology laboratories, isolation and identification of positive cultures among mixed growth samples can save time in patient management.

The authors have no potential conflicts of interest. All authors agreed to the content of the article and contributed significantly.

Author thanks the technical staff of Mycobacteriology Laboratory, New Delhi Tuberculosis Centre New Delhi, for their support to complete this study.