1Department of Aquaculture and Fisheries Management, University of Ibadan, Nigeria

Copyright: © 2015 Kareem OK, et al. This is an open-access article distributed under the terms of the Creative Commons Attribution License, which permits unrestricted use, distribution, and reproduction in any medium, provided the original author and source are credited.

The freshwater Nile silver schilbeid catfish, Schilbe mystus, (Order: Siluriformes, Family: Schilbeidae) and the freshwater Bagrid catfish, Chrysichthys nigrodigitatus, (Order: Siluriformes, Family: Claroteidae) constituted one of the most dominant fish species in Nigeria inland waters. These carnivorous species are good quality food fish of white and very tasty flesh serving as delicacy for many low income earners [1], especially in riverine communities. In addition, they are important both in ecological and economical terms, playing salient role in determining the dynamics and structure of aquatic ecosystem [2]. According to Akinsanya [3], the emanating need to culture fishes for protein consumption for the teeming rapidly growing populations in the developing countries have made it necessary to intensify studies on the length frequency of the African freshwater fishes. It is equally necessary to study the length-weight relationship (LWR) of these species in order to provide and increase the knowledge of the stock available.

The LWR is one of the standard methods that yield valid biological information. It establishes the mathematical relationship between the two variables, length and weight, so that unknown variable can be readily computed from the known variable. Also, it shows the variations from the expected weight, for the known length groups, this is in turn reflects its fatness, general wellbeing, gonad development and suitability of environment of the fish [4]. The condition factor (CF) is an index reflecting interactions between biotic and abiotic factor in the physiological condition of fishes. It shows the welfare of the population during the various stages of the life cycle [5].

The importance of LWR and CF of fishes has inspired a large number of works in Southwestern Nigerian lakes and reservoirs [6- 10]. The most notable contribution on Chrysichthys nigrodigitatus and Schilbe mystus were that of Olagbemide [11], Dada and Araoye [12], Taiwo and Aransiola [13]. However, no information is available on the LWR and CF of Schilbe mystus and Chrysichthys nigrodigitatus in Erelu Lake. Therefore, the present study was undertaken to elucidate the pattern of growth and general well-being of these fish species in this reservoir. Since LWR and condition factor is a perfect indicator to assess the welfare of fish, the study will provide information for successful development, production and sustainable management of the subject species.

The study area (Figure 1) is Erelu reservoir, Oyo West Local Government, Oyo State, Nigeria. The dam was built in 1961 by the then Western region government to supply portable water to Oyo and its environs. It also provides nursery and breeding grounds for a large variety of fish species and as such gave room for fishing activities. It is located on latitude 07053’- 07054’N and longitude 03053’- 03’55’E. Erelu dam was built on Awon River along Oyo/Iseyin axis and fed by the following tributaries: Isuwin, Oroki, Ogbagba, Oloro, Elesin, Awon and Abata. It has a catchment and impoundment area of about 243.36 km and 3158600 m2 respectively, with maximum depth of about 5.1 m. The dam is about 6.4 km from the heart of Oyo town. Samples of Chrysichthys nigrodigitatus and Schilbe mystus were obtained on a monthly basis for Twenty-one months (July 2013-March 2015) using gill-nets of mesh sizes 38.1, 50.8, 63.5, 76.2, 88.9, 101.6 and 127.0 mm. Each net was 30 m long and 3 m deep. The nets were set simultaneously at the shore, surface and bottom at 1900 hours and fish retrieved the following morning between 0700 and 0900 hours. The specimens collected were immediately transported in ice block to the laboratory for length (cm) and weight (g) measurement using the method described by Adetayo and Kusemiju.

The relationship between the length (L) and weight (W) of fish was calculated using Le Cren [4] equation: W = aLb; where W= weight (g), L= length of fish (cm), a and b = regression coefficient and slope respectively. The logarithm-transformed data will give the linear regression equation: Log W = log a + b log L

Condition Factor (K) was estimated by the relationship K =

All the statistical analyses were considered at significance level of 5% (p<0.05). The Statistical Package for Social Sciences (SPSS, version 17) and Microsoft Office Excel software were deployed in this study.

A total of One thousand one hundred and seventy-nine (1179) fish samples composed of Six hundred and twenty-eight (628) C. nigrodigitatus and Five hundred and fifty-one (551) S. mystus were collected during the study period. The sample size and growth parameters for the two species were computed separately for male, female and combined sexes as shown in Table 1, Figures 2 and 3. 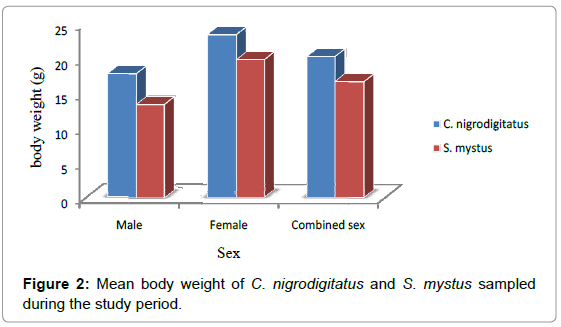 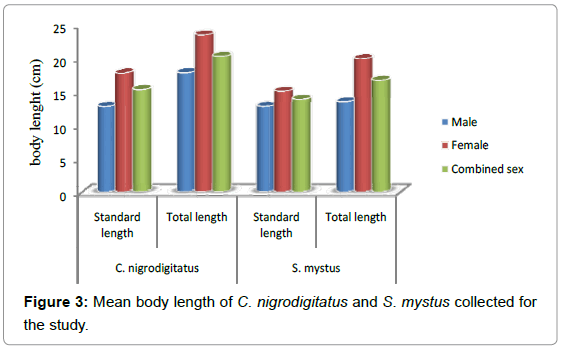 This result revealed preponderance of females over males in the population sampled. The male to female ratio was significantly different (p<0.05) from the expected ratio of 1:1. This was also experienced for S. mystus in Erinle Lake by Komolafe and Arawomo [14]. Similarly, Fafioye and Oluajo [15] reported preponderance of female in the population of C. nigrodigitatus from Epe lagoon.

The length of S. mystus sampled ranged from 8.50 cm-31.50 cm (SL) while the weight ranged from 15.3 g-483.2 g. The largest male fish weighed 301.7 g, while the largest female fish weighed 483.2 g. Also for C. nigrodigitatus, the least standard length was 11.7 cm (18.9 g BW) in male while the largest was 33.6 cm TL (528.9 g BW) in female. These results showed that females were longer and heavier than males for both species. This is in agreement with Le Cren (1951) who reported that females are heavier than males of the same length probably because of difference in fatness and gonadal development.

The log length - log weight relationship for these species is as shown in Figures 4 and 5. From the regression analysis of standard length and weight of the two sampled species (Table 2), the values of intercept ranged from 0.1048 - 0.1414 in C. nigrodigitatus while log “a” value for S. mystus was varied between 0.1492 and 0.3480 respectively. The values of (b) of the length- weight relation were ranged from 1.76 to 2.56 for C. nigrodigitatus and 2.20 to 2.95 for S. mystus. T- test conducted showed significant difference between the values of ‘b’ obtained and the expected value of isometric growth i.e., 3 (p<0.05). Therefore, the growth pattern in both sexes of C. nigrodigitatus and S. mystus in Erelu reservoir are said to be negatively allometric. The correlation coefficients (r) of the fishes which ranged between 0.8845 and 0.9766 indicated high degree of positive correlation between their standard lengths and body weights. This implies that the body weights of the fishes increased with increase in body length, but the rate of increase in weight is less than the rate of increase in length. Offem [16], reported similar negative allometric (2.6) growth pattern in C. nigrodigitatus in the Cross River inland wetland. Negative allometric growth has also been reported for S. mystus from Ologe Lagoon, Lagos [17]. However, unlike the results in this study, positive allometric growth patterns were reported for C. nigrodigitatus in Amassoma River flood plains [18], Epe Lagoon [15] and Asejire dam [19]. 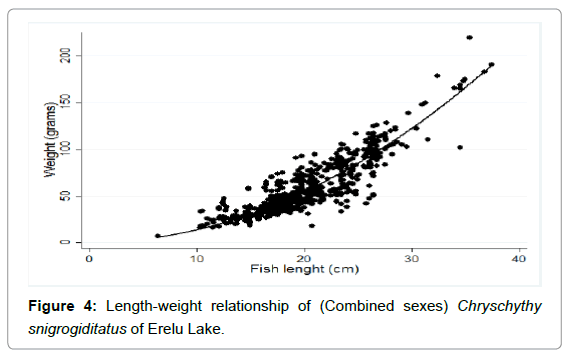 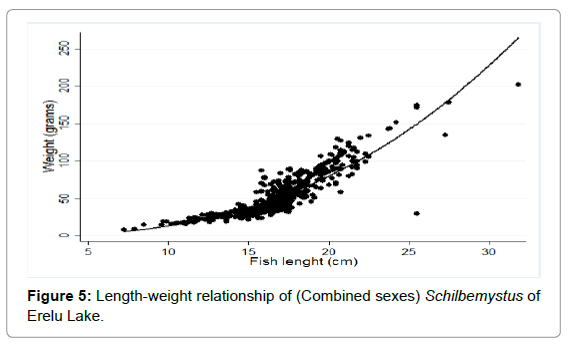 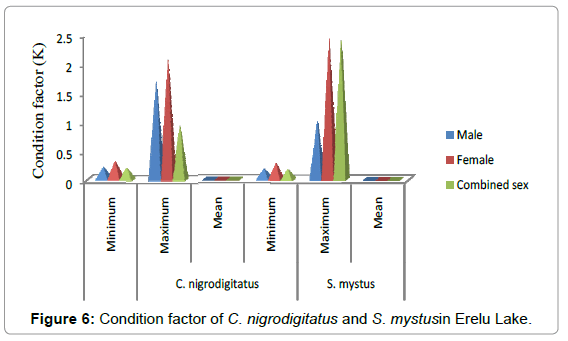 This result implies that females do better in terms of fatness and robustness in Erelu lake. Also, there is an indication showing that S. mystus enjoyed a better environmental condition in Erelu lake more than C. nigrodigitatus. Similar to these observations, Lawal [20] and Kumolu-Johnson and Ndimele [17] have also reported significant differences in k-factor between sexes of C. nigrodigitatus and S. mystus. Condition factor has also been closely linked with reproductive cycle for fishes in other water bodies [21,22].

This preliminary study revealed that C. nigrodigitatus and S. mystus from Erelu lake, Oyo, Nigeria exhibited negative allometric growth pattern. The correlation coefficients of the length-weight relationships indicated high degree of positive correlation. The condition factor showed that C. nigrodigitatus and S. mystus were in good physiological state of wellbeing in the dam. Further investigations of the bionomics of the fishes of this dam are advocated to complement the results of this study.