Copyright: © 2015 Kwaansa-Ansah EE, et al. This is an open-access article distributed under the terms of the Creative Commons Attribution License, which permits unrestricted use, distribution, and reproduction in any medium, provided the original author and source are credited.

Birds as high consumers and account for accumulative processes in marine pollution accumulate contaminants such as mercury (Hg). Therefore, in this study, the concentration of total mercury (THg) in ten (10) different tissues of Ardea cinerea from the Volta Lake, Ghana was measured. The THg concentrations in Ardea cinerea tissues follow the order: lungs

Mercury as a highly toxic non-essential metal strongly influences humans and wildlife with direct effects on behaviour, neurology, endocrinology and development [1,2]. The source of Hg is from both natural and anthropogenic sources as well as human activities [3]. Hg contaminates oceanic islands and polar and sub-polar regions due to its high volatility and long atmospheric residence time [4,5]. Exposure to mercury results in impaired vision and hearing, dizziness, vomiting, headache, muscular weakness, allergies, depressed immune system and brain damage [6].

The Volta Lake is a unique and an extraordinary natural resource that provide drinking water, food, recreation, employment and transportation to millions of Ghanaians as well as tourism. Volta Lake is the World’s second largest and Africa’s largest artificial inland water body which occupy 3.6% of the total land area of Ghana. The Volta Lake supply about 90% of the nation’s inland fish supply.

It is known that certain forms of mercury can readily accumulate within organisms tissues at much higher levels than those in the water column and in sediment [7]. Mercury as a non-biodegradable contaminant can enter aquatic food chains and consequently accumulates organisms at the various trophic levels [8]. Biological and ecological factors have significant influences on metals bioaccumulation and bioavailability [9].

Birds are valuable tool for environmental monitoring because they are always at the top of the food chain and often have high levels of Hg contamination [10-14]. Feathers are among the most attractive tissue to monitor, because they are considered as the main route for Hg elimination [14]. Mercury accumulation in piscivorous birds has extensively being studied in the past [15-18], but to the best of our knowledge data on mercury contamination in different tissues of grey herons from the Volta Lake, Ghana is lacking. This work is aiming to evaluate the residual accumulation of mercury in different tissues of grey heron’s in Ghana.

The Volta Lake was formed in 1965 as a result of the construction of the Akosombo dam which generates hydroelectric power for Ghana. It has a surface area of 8500 km2 and covers about 4% of Ghana’s total land area. It covers 1,232 communities with a population of over 300,000 people living along the shoreline whose livelihood depend on the Volta Lake [19].

Our overall protocol, under appropriate state and federal permits was to collect grey herons from shorebirds netted during their migratory stopover on Volta Lake in Ghana. 10 grey herons were collected as by catch of long line fishing vessels or found recently dead on land killed following collision with the Scientific considered for this study. The grey herons were weighed in the field, immediately frozen and kept at -20°C until analyses. Birds were thawed overnight and dissected for kidney, intestines, lungs, heart, gizzard, blood, brain, liver, flesh and feathers that give the best measure of the Hg contamination of a bird. The birds were transported to the Department Of Wildlife, Faculty of Renewable Natural Resources, Kwame Nkrumah University of Science and Technology, Kumasi for measurement of their biometrical features. After measurement of biometrical features, the birds were kept frozen at -4°C until analysis.

During the analysis, the birds were dissected and the various tissues separated into kidney, intestines, lungs, heart, gizzard, blood, brain, liver, flesh and feathers. Each tissue was washed with deionized water minced into smaller pieces and homogenized. The samples were digested for total mercury determination by an open flask procedure developed by Akagi and Nishimura [20]. In the procedure, approximately 0.5 g of each tissue was weighed into a 50 mL digestion tube and 1mL deionized water, 2 mL of a mixture of HNO3 and HClO4 (1:1) and 5 mL H2SO4 was added. The samples were digested at 200°C ± 5 for 30 minutes, cooled to room temperature and topped to the 50mL mark with deionized water. A blank and standard solution was digested using 25, 50 and 100 μL of l μg/mL standard Hg solution. Total mercury concentrations were determined using an automatic Mercury Analyser (Model HG-5000). The reducing reagent used for the analysis was 0.5 mL of 10% (w/v) SnCl2.2H2O in 1 MHCl. Quality assurance samples analysed included procedural blanks, replicate samples and post-digestion spikes. The accuracy of the procedure was determined by analysis of standard reference materials (SRMs). The SRMs included National Research Council of Canada (NRCC) DOLT-4 (dogfish liver) and TORT-2 (lobster hepatopancreas). All CRMs were recovered at ± 10% of the certified value; 0.27 ± 0.06 for Tort-2 and 2.58 ± 0.22 for Dolt-4. Statistical analysis was conducted using IBM Statistical Package for the Social Sciences ‘20. A significance level of α<0.05 was used for all tests.

During current study, mercury concentrations in tested tissues of all the fishes increased in order lungs < heart <brain<gizzard<i ntestines<flesh<blood<kidney<liver<feathers (Figure 1). Mercury concentrations are usually found at the highest levels in feathers followed by liver, kidney, and muscle tissues [17,21]. In birds, feathers play a major role in mercury excretion [22]. As a result of high affinity for the sulfhydryl groups in keratin, mercury can accumulates in bird feather [21,23]. Previous reports indicate that Hg accumulates more in liver than kidney follow by muscle [11,17,18]. Lewis and Furness [24] also reported lower mercury levels in kidney than liver in black-headed gull (Larus ridibundus). 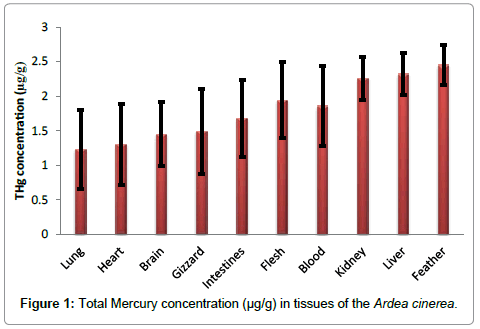 Frodello et al. [25] and Storelliet al. [26] reported that the liver appeared to be the preferential organ for mercury accumulation, followed by the kidney. The THg concentration in the liver is accounted for the biotransformation of demethylates organic mercury into less toxic [27]. The levels of mercury found in the kidneys are explained on the basis that the kidney is the major reservoir of inorganic mercury in birds as well as mammals [28]. The kidney contains a thiol-rich protein called metallothionein and exposure to toxic metals triggers the production of this protein and binds tightly to the metal [29]. Spalding et al. [30], found that kidney disease and gout were present in great white herons are greater than 25 μg/g. Though elevated mercury levels were found in the kidney tissues of the birds in this study, the highest concentration of THg (2.85 μg/g) found in the kidney tissues of Ardea cinerea was about nine times less than the concentration reported to cause diseases and adverse effects in birds.

Boening [36] and Ochoa-Acuna et al. [37] found some differences in Hg concentrations in feathers across taxonomic bird groups. Mercury concentrations in birds also depend on body size, moult strategy, migration patterns and physiology [38]. Fish-eating birds are at risk of higher contents of Hg because its circulation is associated mainly with water basins [37,39].

Pearson correlation coefficient between the age and THg concentration in all the tissues studied showed a very strong linear relationship. Total mercury concentrations in the tissues of Ardea cinerea were positively correlated with age (p<0.05). This relationship suggests that as grey herons mature, mercury is accumulated in all the tissues studied as such they can be useful bio-indicators for monitoring Hg pollution in the Volta Lake and other aquatic ecosystems.

The results showed that the accumulation of total mercury varied among the various tissues. However, Ardea cinerea species showed relatively high THg concentration in feather tissues. From a public health perspective, levels of mercury in the tissues of birds are very alarming. Therefore, studies on mercury contamination in birds especially around the coastal areas are relevant and useful for environmental monitoring.

The authors are very grateful to the National Council for tertiary Education (NTCE), Ghana for a research grant under the Teaching and Learning Innovation Fund (TALIF-KNUSTR/3/005/2005). We are also grateful to the Department Of Wildlife, Faculty of Renewable Natural Resources, Kwame Nkrumah University of Science and Technology (KNUST), Kumasi, Ghana for the use of their facilities for this work.