Meshram AM and Mohite SA*

Copyright: © 2016 Meshram AM, et al. This is an open-access article distributed under the terms of the Creative Commons Attribution License, which permits unrestricted use, distribution, and reproduction in any medium, provided the original author and source are credited.

Morphometric study of blood clam, Tegillarca (Anadara) rhombea was undertaken for the period of twelve months from February 2014 to March 2015 (except June-July) at the Ratnagiri coast of Maharashtra, India. Relationships between shell length (L), shell height (Ht.), shell width (Wd), hinge length (Hg), total weight (Wt.), wet weight (WWt) and dry weight (dWt) were studied in total 1200 blood clams. Linear regressions calculated were Ht=6.068+0.7106 L, Wd=2.938+0.9041 L, Hg=-0.7707+0.6649 L, Log Wt=Log (-2.795)+2.67 Log L, Log Wwt=Log(-1.0834)+1.2395 Log L, Log Dw=Log (-2.16)+1.30 Log L respectively. From the present study, it can be concluded that more or less similar growth pattern was observed in different months though a faster growth rate was observed during postmonsoon due to the recruitment of small sized clams in January, which grew at a faster rate initially and the growth rate decreased afterward as the energy was utilized for gonadal developments and other body functions.

Many species of clams occur abundantly along Indian coast, particularly in the estuaries and backwaters, forming sustenance fisheries. The clams are rich in protein, glycogen and minerals which are easily digestible. Being lower in food chain they are admirably suited for 'onbottom' farming. Clams belonging to Families such as Veneridae, Arcidae, Cardiidae, Psammobiidae, Donacidae etc are found along the coast of Maharashtra, India. Clams from Family Arcidae, popularly called as ribbed clams, ark shells, cockles, blood cockles and blood clams are harvested by local fisher folks throughout the year. These clams, locally known as khanvi mulye or Rangne mulye are found along the estuarine areas of the south west coast of Maharashtra. The presence of the hemoglobin pigment of vertebrates in these clams is most interesting character and it is found simply dissolved (not in corpuscles) in both the blood and tissues and colors the muscle red [1-3].

Out of the two species viz. Tegillarca (Anadara) granosa and T. (A.) rhombea, the later is represented in the clam catches of Ratangiri and it forms the basis of subsistence for the fishermen during seasons when sea fishing is at low ebb and clam fishing is a regular activity in many coastal regions of Maharashtra, Goa, Karnataka and Kerala on the west coast. Along the east coast, clam fishing is restricted to a few centers such as the Kakinada Bay; where they are collected for culinary purposes elsewhere [4]. Along the west coast of India, the clams are consumed mostly by the poorer sections of the coastal population, particularly during the monsoon when there is a general cessation of fishing activity in the sea. Of late, the clam meat is used as a feed ingredient in aquaculture. The shell is used in the manufacture of cement, calcium carbide, sand-lime bricks and lime. The clam shells are used for manuring coffee plantations, as a mortar in building construction, in the treatment of effluents, as a pesticide by mixing with copper sulphate and in the glass, rayon, polyfibre, paper and sugar industries. In recent times frozen blood clam meat is exported to Japan. As it is an economically important mollusc species, it has been widely cultivated in East and Southeast Asian countries.

In India much work on this blood clam has been carried out in Kerala, Porto Novo and Kakinada Bay in India mostly on T. (A.) granosa but not much work has been carried out about T. (A.) rhombea along the Ratnagiri coast. Therefore the present work was undertaken for the period of twelve months from February 2014 to March 2015 (except June-July) to study the morphological aspects of T. (A.) rhombea along Ratnagiri coast, Maharashtra.

The coastal district of Ratnagiri is situated at latitudes 16° 59' 10" N and longitudes 73°18' 25" E. It is on the west coast of India facing the Arabian sea. Blood clams are collected from beds of Kajali and Kalbadevi estuaries of Ratnagiri (Figures 1 and 2). Morphometric measurements of clam were taken using a Vernier caliper, and the weight measurement by an electric balance. Relationships between length, width, height, hinge length, total body weight, and wet weight were studied in total 1200 blood clams. All morphological measurements such as shell length, height, width, total weight, wet weight and dry weight were measured following the method adopted by Abraham [5]. Regressions of height, width, hinge length, total weight, wet weight and dry weight on shell length were studied by the simple equation for linear regression Y=a Xb, where Y was taken as height (Ht.), width (Wd.), hinge length (Hg), total weight (Wt.), wet weight (WWt.) and dry weight (dWt), respectively. X was taken as shell length (Lt). ‘a’ and ‘b’ are constants to be determined empirically. Ark shells vary from small to large sizes and are mostly elongate or squarish in shape. About 200 species belong to this family, where the shells tend to be squared off and porcelaneous. Their surface is sculptured by radial ribs and covered with a thick velvety periostracum. The beaks are hooked and usually apart from each other, forming a wide ligament between them. A wide, straight-edged hinge possesses numerous small teeth. The clams found mostly in the estuarine environment are naturally subjected to fluctuating ecological conditions, which exert great influence on their growth and breeding. The relative growth of different parts of the body shows changes, thereby bringing about changes in form. In the Arcidae family, Anadarine subfamily was proposed by Reinhart [6]. According to him the taxonomic features of Anadara species are (i) ventral margin closed, (ii) byssal gape lacking (iii) sculpture consisting of large, regular radial ribs, sculptured with grooves or nodes in most species, (vi) (iv) surface of the shell regularly rounded, (v) ligament area narrow to moderately wide, flat to widely ‘V’ shaped when viewed in cross section (with both valve joined), (vi) hinge straight or gently arched, (vii) teeth regularly diminishing in size from extremities to center, but usually not completely lacking in the center, (viii) Inner margin of the shell is crenulated, (ix) beaks never opisthogyrate, pointing either inward or forward Figures 6-8.

Morphologically diverse group of marine bivalves are included in the Anandara genera and under Arcidae family. They have worldwide distribution. Several countries including Japan, Malyasia, China, the Phillipines and Borneo are commercially culturing Anadara sp. [7]. Some reports included Anadara tuberculosa, Anadara similis and Larkinia multicostata on the Pacific coast of Columbia, Anadara cornea in Fiji, Senilia senlilis in West Africa [8]. According to Chan [9] in the traditional fishery of Malysia, Anadara species have been reported to be the most important form. Lunarca ovalis, Anadara transversa and Noetia ponderosa were reported in coastal Georgia, USA [10] and Arcanoea in the Mediterranean [11]. According to Huber [12] approximately 100 species of Anadaranes are globally known.

Narasimham [13,14] reported that the shell of T. (A.) rhombea was fairly thick, somewhat heart-shaped, convex, much inflated, equivalve and distinctly inequilateral. Dorsal margin is straight, anterior end rounded sloping ventrally, posterior end rounded and obliquely produced in the ventral side and ventral margin concave. Height was noted to be 76.6-95.2% in length (mean 84.5), width 69.6-83.8% in length (mean 75.5); ligamental area broad, rhomboidal and with brownish black chevron markings consisting one complete marginal chevron with numerous vertical markings. Periostracum dark brown, smooth for major part except for the posterior part where it was hairy. Hinge long, slightly concave 52.0-72.1% in length (mean 63.2) and 69.2- 89.9% in width (mean 83.7) with taxodont dentition in single straight series. Teeth 35-52, become slightly longer at the extremes; the anterior and posterior ones slightly curved forwards and backwards respectively; remaining teeth perpendicular to the hinge line. Beaks prosogyrate; umbones widely separated. Valves with 24-27 high, squarish solid ribs; ribs sculptured with closely set transverse flat nodules; posterior 9-10 ribs without nodules interspaces between; nodules much smaller than nodules. Interspaces between the ribs were narrower than ribs. Inner shell was white in colour. Ventral, anterior and posterior margins of valves were with strong crenulations corresponding to the external ribs. Impressions of ribs were not visible in the inner valves. Pallial line was without siphonal indentation; pallial sinus absent. Posterior adductor was scar elongate, squarish; while anterior scar was similar but smaller. T. (A.) rhombea is often compared with A. granosa due to their similarities in the shell sculpture and ornamentation. 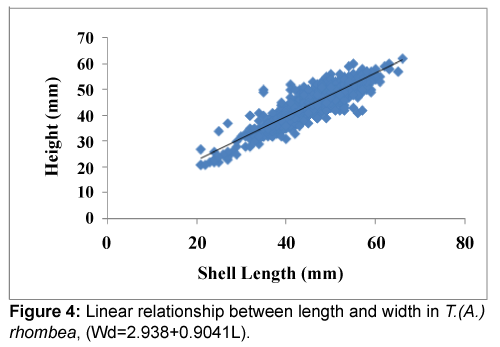 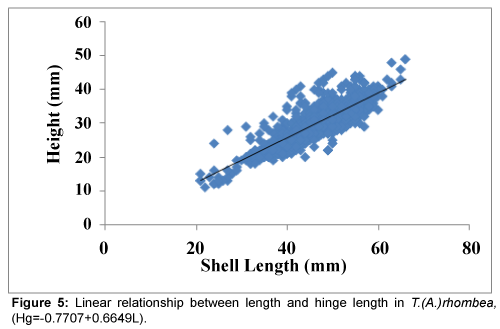 Table 1: Regression relationship between morphometric characters of T. (A.) rhombea. 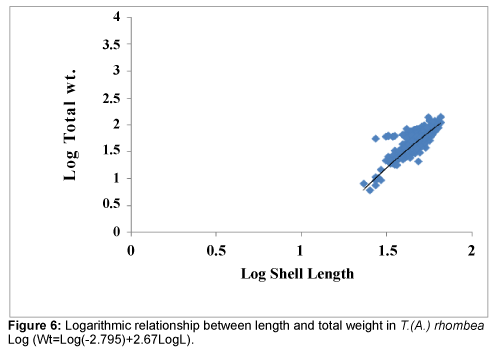 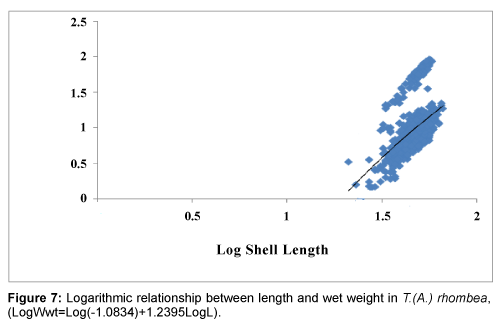 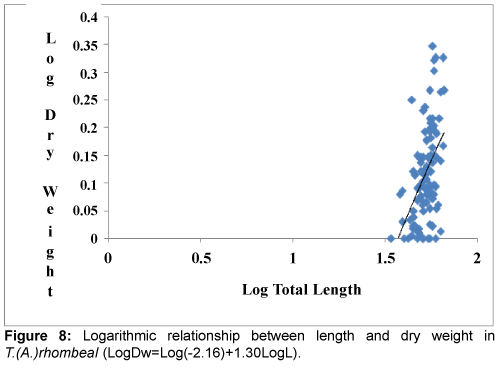 Aydin [15] studied biometric features and relationships between them in blood cockle, Scapharca inaequivalvis, a benthic exotic bivalve species of the Black Sea, Turkey during a period of 12 months. They measured the shell length (SL), width (SWi), thickness (ST) and weight (SWe), as well as total (TW) and meat weights (MW) in these clams. The findings obtained showed that monthly measurements of SWe and MW had a small variation. On the other hand, monthly ST varied greatly. SL and SWe increment (%) models were also generated according to SL classes using regression analysis. Correlation and cluster analysis showed that MW had a weak association with other variables. The strongest correlation was between ST and SWe in October (R2=1.0).

Knowledge of allometry in shell and soft body characters is essential to fully understand the growth of the species [16]. Allometry in the shell length-breadth and shell length-depth variables are linearly related and shows that short individuals are narrow (less breadth) and low (less thickness), and inversely, long individuals are wide (more breadth) and broad (more thickness). This clearly reflects the fact that length, breadth and width are influenced by one general attribute that is variation in size. However, some individual of the same length show different breadth and width and these differences constitute shape variation. Thus, the proportionate change in the shell dimensions resulted in retaining the rhomboid shape of this clam.

According to Wilbur and Owen [17] a variety of environmental factors are known to influence shell form in bivalves. Thus, shape rather than size, generally provides more precise information on the dimensional relationships. From the present observations, it can be seen that linear relationship exists between length and flesh weight. This is because as age increases the weight of clams also increases. Although morphometric relationship between length and flesh weight showed linear growth pattern, variation in this relationship can be explained on the basis of the differences in different phase of life. Correlations among the biometric parameters are of particular significance in terms of understanding of smoothness of organism shell structure.

It is well known that in tropical waters, changes in temperature were negligible and therefore salinity has been found to influence the growth of marine clams [18]. From the present study, it can be concluded that more or less similar growth pattern is observed in different months though a faster growth rate was observed during postmonsoon due to the recruitment of small sized clams in January, which grew at a faster rate initially and the growth rate decreased afterward as the energy was utilized for gonadal developments and other body functions.