Copyright: © 2016 Badam TK, et al. This is an open-access article distributed under the terms of the Creative Commons Attribution License, which permits unrestricted use, distribution, and reproduction in any medium, provided the original author and source are credited.

The clinical presentation of Primary Bone Lymphoma (PBL), a sub-type of NHL can be a challenging diagnosis. Chronic, intermittent pain of a dull aching nature may be the only presenting complaint. In current case, following detailed history, clinical examination, radiological and laboratory studies, patient was presumptively diagnosed with Osteomyelitis. Considering relative and absolute rarity of PBL, the possibility of such a rare occurrence was considered quite low on the list of differential diagnosis.

Lymphoma commonly occurs in the lymph nodes, and extranodal origin is less frequent. Primary Bone Lymphomas (PBL) is rare, even though secondary involvement of bone marrow in systemic lymphoma is common. Primary Bone Lymphoma was first described by Oberling in 1928 [1]. Parker and Jackson reported a PBL series in 1939 [2] under designation reticulum cell sarcoma of bone, establishing PBL as a distinct entity. The lymphoid and B-cell origin was subsequently proved by Immunohistochemistry [3,4].

A 18 yr old man complained of progressive pain in the right hip and low back on and off since January 2015. Had episodes of fever on and off. He was treated at various other hospitals with NSAIDS. This treatment relieved some, but not all, of the symptoms. Six months later, the patient presented to the clinic in our department complaining of pain in right hip and low back on weight bearing activities. He had X-ray images of pelvis that showed lytic radiolucent lesion with moth-eaten destructive pattern and sclerotic areas, with continuos periosteal reaction, without cortical breach or soft tissue extension in right greater trochanter/ proximal femur (Figure 1). X-ray LS spine showed sclerotic lesion involving body of L5 vertebrae (Figure 2). 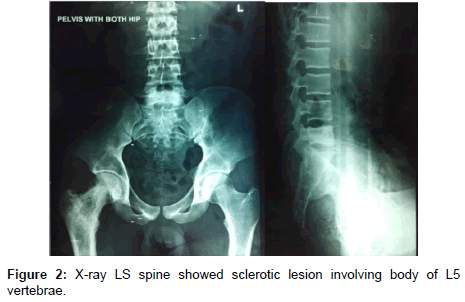 To confirm the diagnosis, Open biopsy of right greater trochanter was done. Grossly, the material consisted of haemorrhagic and highly sclerotic bone specimen. Microscopically, highly concentrated atypical round cell and lymphoid infiltration, areas of necrosis and foci of bone destruction was seen (Figure 5). Immunohistochemical stains were positive for CD45 (Figure 6), CD20 (Figure 7) and negative for CD3 (Figure 8), CD99 and Desmin. Based on these results, the diagnosis of Non-Hogdkins Lymphoma (Diffuse Large B-cell Lymphoma) was made. Ultrasonography of Neck, CT of chest, abdomen and pelvis were done to exclude nodal origin and distant spread, which were negative. Bone marrow aspiration was done and sent for analysis which was negative. Immunohistochemical staining for Ki 67 was done to know the mitotic activity, which was Immunoreactive (75%). Then, a Final diagnosis of Primary Bone Lymphoma – Primary Bone Diffuse Large B-cell Lymphoma (PBDLBCL) was made. Figure 9: Total 8 cycles of chemotherapy has been given to the patient. Figure 10: PET scan was done at the end of chemotherapy, for assessing the response and further management. Figure 11: PET scan showed no evidence of significant metabolically active disease in the primary bone lesion site and anywhere else in the body.

The criteria for a diagnosis of Primary Bone Lymphoma was established by Giudici et al. [7] in 1992, (a) on presentation, the patient demonstrates a primary focus in a single bone; (b) histological proof should be obtained from skeletal focus; and (c) the onset of symptoms of primary skeletal lesion should precede the distant metastasis by atleast six months. In 2005, [8] states that following criteria should be met, (a) solitary bone lesion or multiple skeletal lesion with no prior involvement of lymph nodes or other lymphoid tissue; (b) Histological documentation of Lymphoma in the bone; (c) no lymph node involvement or involvement of regional lymph nodes. All of the above criteria were fulfilled in our case.

Most commonly affects the middle aged to elderly population. However, it has been described in paediatric patients as well [10,12]. There is male predominance with Male: Female ratio of 1.5:1. The most common presentation of patients with PBDLBCL is bone pain and less frequently by palpable mass and pathological fracture. Very rarely, neurological symptoms such as paraplegia can occur due to cord compression. Systemic symptoms (B-symptoms) such as weight loss, fever, and night sweats are very rare. Rarely, lethargy, constipation, and somnolence can occur due to hypercalcemia [6].

On X-rays, primary lymphoma of bone have a variable radiographic appearance and lack specificity [15]. Some are lytic and some are sclerotic lesion. But, most of them are lytic radiolucent lesions with moth-eaten or permeative destructive pattern. This may be associated with sclerotic areas. Cortical erosion and soft tissue extension is frequently seen. Periosteal reaction (continuous or interrupted) can be present. In some cases, tumour may evoke a sclerotic response and present as Osteoblastic lesion, which can be mistaken for Pagets disease or Osteoblastic metastasis [16].

Grossly, Soft fleshy gray-white or haemorrhagic appearance with sclerotic bone specimen [5]. Microscopically, diffuse growth pattern with tumour cells permeating between bony trabeculae and invading haversian canals. There is often a sclerotic stroma and tumour cells can invade in nests, cords or solid sheets. PBDLBCL shows a polymorphous appearance. Tumour cells show marked variation in size and shape with multilobulation, that are accompanied with reactive B and T cells. Occasionally, lymphoma shows immunoblastic morphology with round nuclei, prominent nucleoli and abundant amphophilic crystals [17]. Tumour cells may be crushed during biopsy procedure, which may lead to difficulty in diagnosis. Prolonged decalcification may affect cytological features and Immunohistochemical staining [16].

Primary Bone Lymphoma is a very rare entity with morphological and radiological heterogenecity. The histological and immunohistochemical similarities, ranging from benign conditions such as Osteomyelitis to small round cell tumours, should be borne in mind while assessing these neoplasms to avoid misdiagnosis and inappropriate treatment. Delays in diagnosis can have serious effects on the prognosis of the disease, in which the stage is considered as most important prognostic indicator [23]. Therefore it is essential to diagnose a lesion prior to leukaemic spread or metastasis. Thus in patients with osteomyelitis like symptoms and bone pain refractory to medical treatment, a thorough diagnostic work-up should be undertaken, and unusual neoplasms such as this haematopoetic malignancy should be considered in differential diagnosis [24].

By reviewing our case and other literature, we have come to the same conclusions as [9]: Surgeons should return to the basics of culturing all suspected tumours and obtaining a biopsy specimen of all presumed infections, even in instances of positive cultures or negative biopsy specimens. Significant worsening of symptoms in chronic osteomyelitis requires thorough work up with appropriate imaging studies, and excision of an additional biopsy specimen.