Copyright: © 2015 Dehghani M, et al. This is an open-access article distributed under the terms of the Creative Commons Attribution License, which permits unrestricted use, distribution, and reproduction in any medium, provided the original author and source are credited.

The inner ears of all teleost fishes contain three calcified structures, which acts as balance and hearing organs [1]. Otoliths serve as a permanent record of the life history of an individual fish [2], and they hold a wealth of information on daily age, size, growth and ontogeny of fishes [3]. Because otoliths are not resorbed in times of stress, and continue to grow throughout their life [4,5], they are one of the most reliable tools for determining the age of a fish, and Since age is used to establish growth rates of a fish species and age compositions of a certain population and to fisheries management, also otolith chemistry and microstructure analysis have developed greatly in the recent years and have showed a wide range of applications for stock identification and other environmental studies concerning fish habitats, study of the feeding ecology of fish predators, and determine the migration pathway of fishes [4,6-8] Such applications are not limited to ichthyology, but are widely extended to the study of the feeding ecology of fish predators, and to some aspects of palaeontology, stratigraphy, archaeology and zoogeography.

The size and shape of otoliths are variable according to species and size of fish [9]. By using the relationship between fish length and otolith dimensions (length, width, area, perimeter, thickness) and weight it is possible to identification and size-estimation of fish, prey size form stomach samples and analysis of digestive tract content of fishes, feeding on the others fishes, identifying fish stock and specially for age determination [10-15].

Sardines are small pelagic fishes that live in coastal waters of many seas and oceans. They feed on planktons and other hand, eaten by other fishes, so they are importance in marine food web [16,17]. In addition, sardines are consumed as fresh meal for humans and as commercial powder [18-20].

Many authors studied about various types of applications of sardine otolith. For example age, growth and mortality estimation, identification of fishes and their size, determine the fish stock and trace migration pathway of fish [21-29].

According to FAO, [20] Sardinella sindensis is the important commercial fish for Iran and Pakistan, but there is not any published information about otolith of this species. Otoliths tend to grow linearly in length and width with increasing fish size, and to grow linearly in thickness and weight with increasing fish age [30]. For most species, the relationship between otolith length and fish length can be described by a simple linear regression [31].

Fishes were selected, randomly, from commercial catches that were done using purse seine nets. About 123 fishes were collected from coastal waters of Bandar Lengeh (26°55′27′N 54°88′14′E) and 128 fishes from Qeshm Island (26°41′43′N 55°37′06′E) in North of Persian Gulf (Iran) during March 2011 to February 2012 (Figure 1). Fishes were transported to the laboratory of Persian Gulf and Oman Sea Ecological Research Institute, Bandar Abbas. 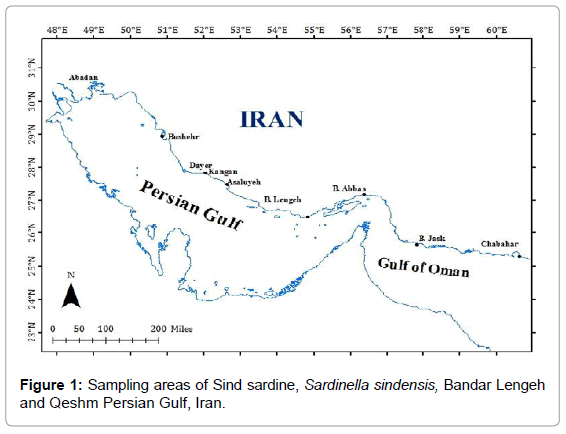 First, total Length of fishes were measured to the nearest 0.1 mm, then sex determination was done under stereomicroscope. Chi-square test was performed for sex differences. Otoliths were extracted from heads of samples, cleaned and dried. Otolith weight was measured by using digital balance to the nearest 0.0001g. For measuring the otolith size, first, taking photo were performed under a stereo microscope linked to a video camera (Motic Image Plus 2), second, Otolith length and width were measured using imaging software (Motic 2) to the nearest 0.01 μm. Otolith Length is the distance from the midpoint of the rostrum at point A through the primordium to the posterior edge at point B. Width is the distance perpendicular to the length passing through the primordium (Figure 2) [15]. Differences between left and right otolith were tested by paired t-test and between males and females by using ANCOVA [32]. ANOVA was used to test for significant differences in area. Relationships between total fish length an otolith length and width described by linear equation as TL=a (L) b, where TL is total fish length, L is otolith length or otolith width, and a, b are constant coefficients. For express relationship between total length fish and otolith weight was used a linear equation like above equation that described as TL= a (OW) b, where OW is otolith weight. Regression method was analyzed by using Excel software (version 2007) for determining the relationships between fish length and otolith length, width and weight. n total, 128 fishes from Qeshm Island and 120 fishes from Bandar Lengeh collected (Figure 3). Chi-square test was performed assuming equal sex ratio and results with a degree of freedom, did not show significant differences between the sexes (X2=1.2, df=1, p>0.05) and (X2=1.125, df=1, p>0.05) for Bandar lengeh and Qeshm, respectively. 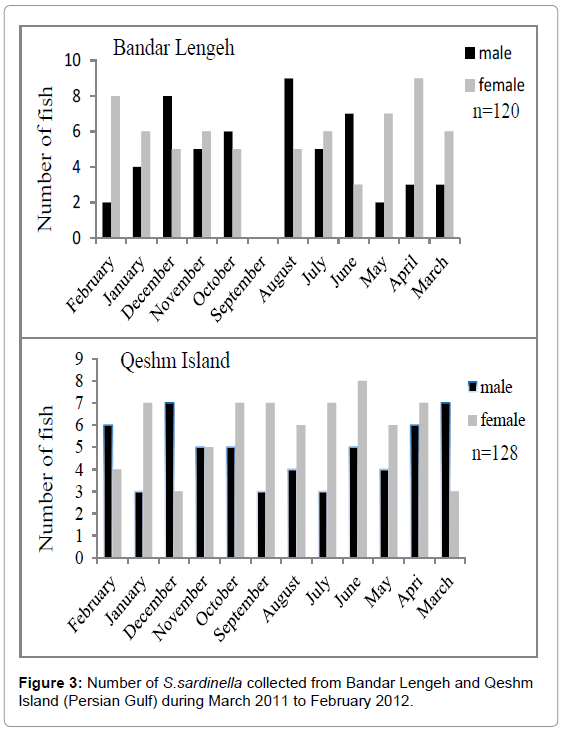 Minimum-maximum and mean fish lengths for Bandar Lengeh were 8.1 -18.3 and 12.7 cm respectively and those for Qeshm were 7.9- 18.6 and 12.9 cm, respectively. All measurement of left and right otoliths were tested and no significant differences were observed between left and right otolith (t-test, P>0.05) and between otoliths of female and males (ANCOVA, P>0.05), therefore, only right otolith used for next analysis and data of each two sex were pooled. Otolith length, width and weight measurements in addition fish length and weight are recorded in Table 1.

Relationships between fish length and otolith length, weight and width were described by regression model and linear equation. The equation for otolith length and fish length was (OL=171.51 TL+ 257.63; R2=0.8661) for Qeshm Island and (OL=165.06 TL+401.64; R2=0.8661) for Bandar Lengeh. Regression models and linear equations of all relationships are shown in Figures 4-6. There were no significant differences in these analyses for two areas (ANOVA, P>0.05). 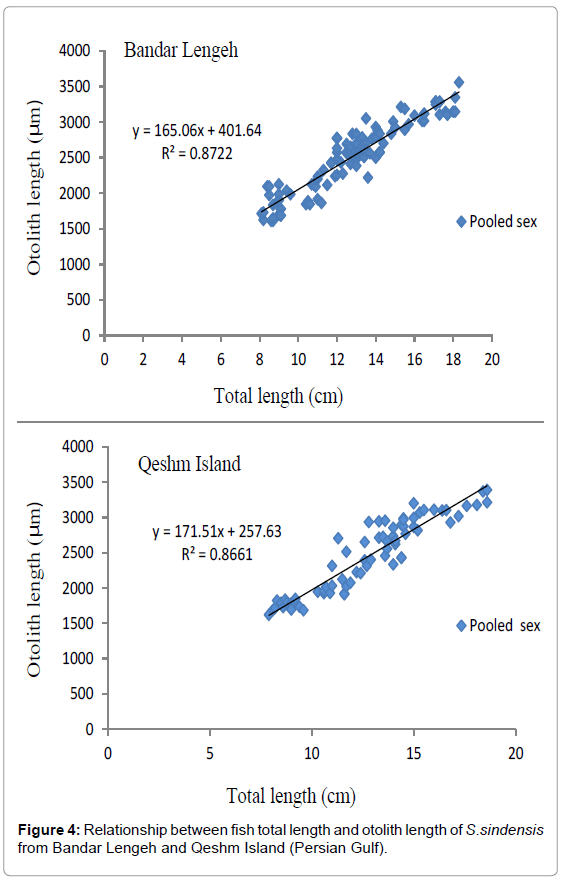 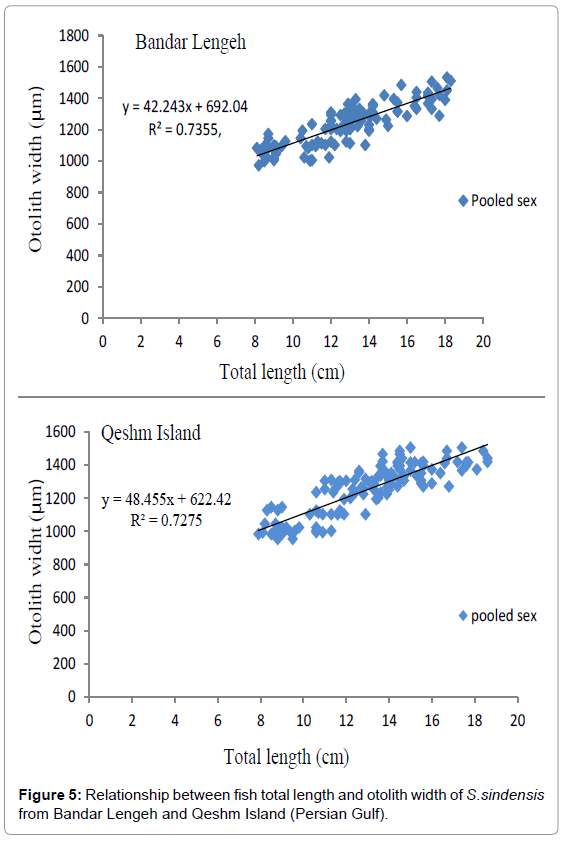 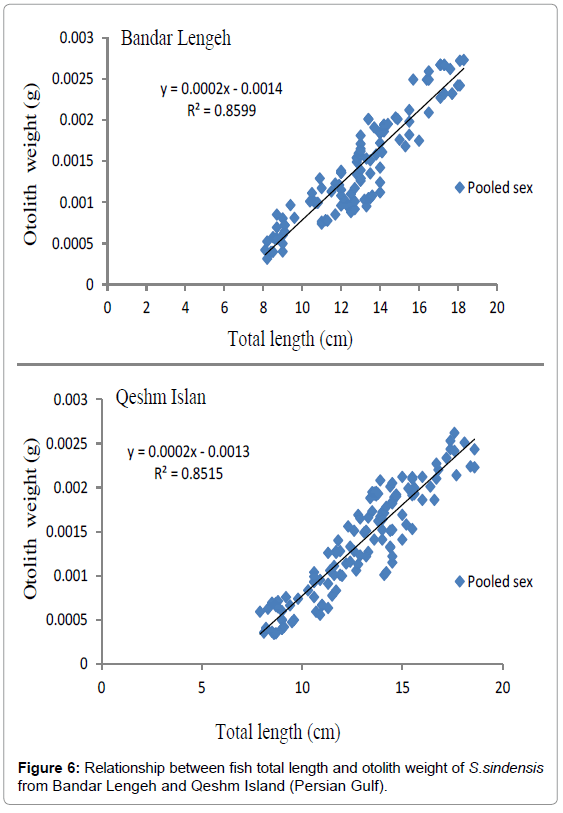 In this study, relationship between fish length and otolith length, width and weight was analyzed by linear model. Otolith dimensions and weight had linearly correlated to total fish length. Relationships between fish length and otolith length for each two area showed highes positive correlathion, that is similar to results of Sardina Pilchardus from Adriatic Sea, Crotia, [33], those of Sardinops sagax from North America [34] S.sagax from Australia [35]and other fish species [10,36,37].

In current study, results of testing the different between right and left otoliths showed no significant difference, and no significant difference between males and females otolith. In addition, this test was similar for two sampling regions. These results are agree with results of other studies [38] but are differ from studies were done on Sardina Pilchardus from Adriatic Sea, Crotia, [33], Sardinops sagax from west coast of North America, [15], and were different from results of other fishes [39-41]. May be could said that fishes from different regions have different allometric growth of the otolith [24], also , the some reason for these different relationships in different studies may be differences of fish species, habitat, food availability and physiochemical factors of waters of environment that lives there [15,41], in addition, There are a number of things that could conceivably produce a shift in the otolith size-body size relationship in the commercial catch, including large changes in age or sex composition, or changes in regulations, gear, or fishing strategies, even different methods used for analysis [39,42].

Respect to the results of this study suggested that otolith dimensions increase as fish length increase and therefore, otolith growth can be correlated with fish growth. However, otolith length had more related to fish length growth and otolith width was lesser correlated to fish length than two other otolith dimensions. Therefore, otolith sizes can be a power proxy for estimate age and size of S. sindensis of this study and those of S.Lemuru form Australia [26] and other fishes [32,43].

Lombarte and Lleonart [44] suggested that otolith development occurs under dual regulation: genetic conditions regulate the form of the otolith, while environmental conditions, mainly temperature in carbonate-saturated waters, regulate the quantity of material deposited during the formation of the otolith. Butler et al. [24] reported that was not possible to use otolith weight with other data to estimate age of Pacific sardine.

The regression method is very appealing in its simplicity but has two drawbacks. It will often be necessary to transform predictors and (or) the predict and to obtain linear relationships, and even then, this is likely to achieve only approximate linearity. The second, and more serious, drawback is that this method produces asymptotically biased estimates of proportions at age [45] however, linear regressions between age-otolith size, unlike annulus counting methods, to estimate the age structure of the Sardines population need lesser time and cost [29,46].

These relationships are useful tools for studying feeding and for research on fish fossils [31,47] especially for determining fish size that important factor for fish stock monitoring and management. However, suggested that for better understanding about otolith growth, in future studies should be used the relationships between otolith weight and age, and survey about other otolith factors such as area, perimeter, thickness, circularity, and rectangularity.

We would like to appreciate the director and staffs of the Persian Gulf and Oman Sea Ecological Research Institute for contributions in laboratory facilities.