Copyright: © 2015 Bhattacharya P, et al. This is an open-access article distributed under the terms of the Creative Commons Attribution License, which permits unrestricted use, distribution, and reproduction in any medium, provided the original author and source are credited.

Ompok pabo (Hamilton) commonly known as butter cat fish belongs to the family Siluridae. The present paper is on the fecundity of Ompok pabo (Hamilton) an endangered fish of Tripura. Hence the work on the fecundity of this fish from the Tripura was taken up. The specimens were collected from Gomati river of Tripura. The absolute fecundity of Ompok pabo as determined in the present study varied from 2500 to 19636.71 in the specimens measuring 133 mm to 192 mm. The average fecundity was determined to be 9857.315. Number of eggs per gram body weight was found to be 207.41 (L=145 mm and W=12.18 g) to 545.71 (L=193 mm and W=44.81 g). The ova diameter observed minimum 0.55 (mm) to maximum 1.25 (mm).The relationship between fecundity and total length, total weight, ovary weight and between ovary weight and total length has been determined. The different data were statistically analyzed. Fecundity is an important aspect of fish biology. The knowledge of fecundity is essential for management of the fish population cryopreservation of eggs, fish breeding, larval rearing etc., which are necessary for undertaking conservational measures. The Conservation of the species is urgently needed through cultural practices of the species, as the fish is a highly consumer preferred fish.

A considerable amount of work on the fecundity of fish has been done in the recent years in India. The knowledge of the number of eggs produced by fishes is of great value in pisciculture, as it would determine the amount of rearing facilities required and the extent to which various kinds of equipments will be needed. Fecundity appears to bear some broad relationship to the care of environment accorded to the eggs [1]. The number of eggs contained in the ovary of a fish is termed the fecundity [2]. Fecundity varies from one species to another, depending on the environmental conditions, length age etc. Many workers have worked on the fecundity of different fish, viz., Bhuiyan et al. [3], Kuddus et al. [4], Bhuiyan and Parveen [5], Bhuiyan et al. [6] and Dobriyal et al. [7]. Very little information is available on the fecundity of catfish [8]. In the present study the fecundity of the catfish Ompok pabo [9] was investigated. Knowledge about fecundity of a fish is essential for evaluating the commercial practical culture and actual management of the fishery potentialities of its stock, life history [10,11]. The data pertaining to fecundity are also useful in determining the density dependent factor affecting population size [12] and for separating different fish stocks from the same population. No information is available on the fecundity of Ompok pabo from this region of Tripura.

Fish samples were collected fortnightly from fish market and fish landing centers from April, 2011 to March, 2012. The samples consisted of a total of 55 females. In the laboratory, the total length and standard length of the fish were measured in the nearest mm by means of a digital dial caliper (0.01 mm) and their weights were recorded in the nearest 0.1 grams by an analytical balance (Metler Toledo). Gonads of fish were removed intact and placed in 5% formalin solution. The length and weight of the ovaries were also taken. Excess of water was removed from the surface of the fish as well as the ovaries with blotting paper before their weights were taken. After about a month, ovarian tissues were removed from the eggs and the formalin changed. By frequently teasing the ovaries apart and shaking the storage jars, the eggs of several specimens were completely separated from the surrounding ovarian tissue and were ready for counting within two months. Out of the ovaries collected, only 30 were matures for allowing differentiation of mature and immature eggs. Only mature yolky eggs were collected. The numbers of ova contained in these were counted. To estimate the fecundity, gravimetric method was used. The absolute fecundity was calculated by using the following formula [13]. F=W/ W1+W2 (N1+N2), (Where F=Fecundity, W=Total weight of the ovary, W1and W2 and N1 and N2 are the weights and ova counts respectively for each sub-sample). The trends of relationship between fecundity and total length, fecundity and total weight, fecundity and ovary weight and ovary weight and total length were examined by using the Least Square method, i.e., Y=a+bx, where Y=Fecundity, x=Various body measurements (TL=Total Length, TW=Total Weight, Ow=Ovary Weight, a and b are constants). Correlation coefficients of these relationships was computed and tested for significance as per standard methods.

Ovary of the fish

Fecundity of Ompok pabo varied considerable from individual to individual and ranged from in the specimen measuring133 mm to 198 in total length and total weight 10.77 g to 44.81 g. The fecundity varied from 1125 to 19636.71 numbers of eggs. The ranges of ova per gram body weight observed 104.36 to 545.71. The relationship of fecundity with total length, total weight, and ovary weight and between ovary weight and total length has been calculated and summarised.

The logarithmic relationship between fecundity (F) and total length (TL) has been shown in Figure 2 the equation derived is: Log F=-1.124+2.179igTL4.14+1.37TL (r=0.75) the correlation coefficient ‘r’ was found to be (0.75) which indicates a positive correlation between these two parameters. 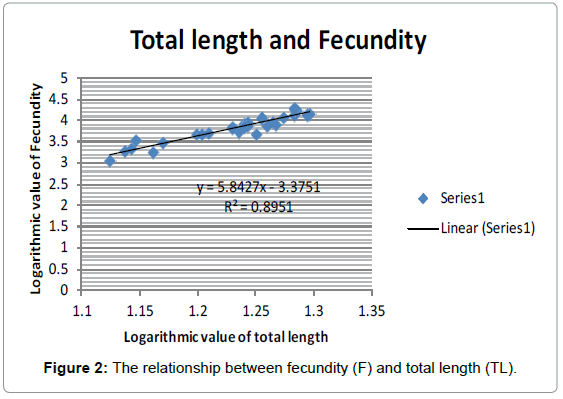 Figure 2: The relationship between fecundity (F) and total length (TL).

The logarithmic relationship between fecundity (F) and total weight (TW) has been shown (Figure 3). The equation derived is as follows: 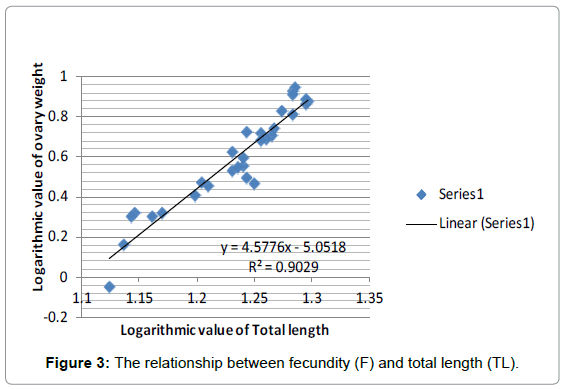 Figure 3: The relationship between fecundity (F) and total length (TL).

The logarithmic relationship between fecundity (F) and ovary weight (Ow) has been shown (Figure 4). The equation derived is:

The value of correlation coefficient (r) was found to be 0.894 and significant at 1% level of significance. This indicates a high degree of positive correlation between the parameters. 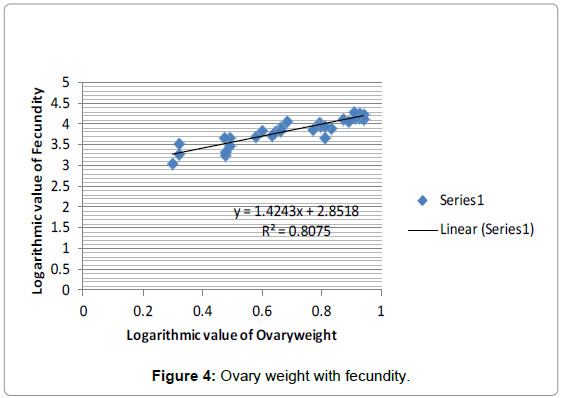 The logarithmic relationship between ovary weight (Ow) and total length (TL) has been shown (Figure 5) and the equation derived is: Log Ow=4.577 × -5.051. The value of correlation coefficient (r) was found to be 0.90and was significant at 5% level showing a positive correlation between the two parameters. 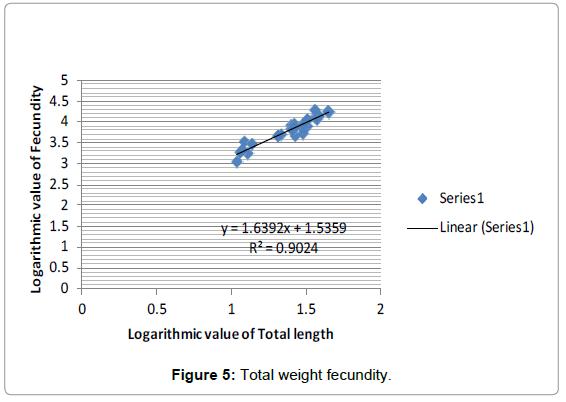 According to Simpson [12], fecundity is directly proportional to body weight. Begenal [13] pointed out that fecundity is more closely connected with the weight of the fish than its length. The number of eggs being a number of units of weight will show an exponential relationship with the entire organism. This has been found to be true in the present study also.

Fecundity was considered to vary as a square of the fish length. Later on Simpson reported egg production to be an internal phenomenon associated with the manner in which the germinal epithelium is folded so as to fill the volume of the ovary thus relating it to the ovary volume and therefore to the cube of the length. In Mystus vittatus also cube relationship (3.0225) was observed by Malhotra et al. Dasgupta determined the value to be 5.06 in case of Mystus gulio. Kaliyamurthy determined the value to be 1.15 for the same species from Lake Pulikat. Lower exponential value has also been reported. Dasgupta reported the exponential value to be 0.5278 for Acrossocheilus hexagonolepis. The value of exponent obtained in the relationship between ovary weight and total length of O. pabo was found to be.

Environmental factors and food supply might affect the fecundity of fish [14]. It is possible that the variation in fecundity of the Ompok pabo may be due to environmental conditions of the River Gomati. This type of variation was also reported by some previous workers in other fish [11]. Different relationships were found to exist between the fecundity and various parameters. Clark [15] reported that the fecundity of a species increases in proportion to the square of its length. Swarup [16], Singh et al. [17] reported a direct relationship between fecundity and length of fish. In the communication, also direct line was obtained with reference to fecundity and length of fish. In the present study, it was found that the number of eggs increase linearly with the increase of body weight, body length, gonadal weight and gonadal length. All the relationships were found to be linear (t-test of all the relationships showed that the Values of the regression, co-efficient ‘r’ were significant.