Copyright: © 2016 Ojji D, et al. This is an open-access article distributed under the terms of the Creative Commons Attribution License, which permits unrestricted use, distribution, and reproduction in any medium, provided the original author and source are credited.

Background: Although hypertension is highly prevalent in Nigeria, coronary artery disease (CAD) remains relatively uncommon. This may well change due to epidemiological transition. To ascertain the future role of CAD in Nigeria, we risk stratified every consecutive hypertensive subject referred to the Cardiology unit of the University of Abuja Teaching Hospital over 7 years.
Hypothesis: A significant proportion of the study population will fall within the intermediate or high risk category.
Methods: It is a prospective, observational study. 1571 hypertensive subjects were risk stratified according to the Framingham 10-year Risk Score.
Results: 834(53.1%) of the subjects were female while 737(46.9%) were male. The mean age, mean body mass index and mean arterial pressure of the subjects were 50.9 ± 11.4 years, 28.1 ± 9.4 kg/m2 and 116.23 ± 13.1 mmHg respectively. According to Framingham criteria, 1263(80.4%) of the study population were low risk individuals, 286(18.2%) were medium risk, 22(1.4%) were high risk individuals. When the age of the subjects was hypothetically increased by an additional 10 years, the high risk group increased from 1.3% to 21.3%.
Conclusions: According to the Framingham risk score, the majority of subjects with hypertension presenting to a large teaching hospital in Nigeria have a low risk of developing CAD in the near future, which contrasts with the risk profile seen in hypertensive subjects in Europe and North America. Nonetheless, approximately one in four subjects were classified as intermediate or high risk emphasizing the importance of lifestyle modification and the need to consider absolute risk stratification to guide management in countries undergoing epidemiological transition.

This represents a paradox given that each 20 mmHg increase in SBP over the range of 115-185 mmHg doubles coronary heart disease and stroke mortality [21]. Consequently, in clinical trials, anti-hypertensive therapy is associated with a 20-25% reduction in incident myocardial infarction [22]. Furthermore, a 10 to 12 mmHg reduction in systolic blood pressure and a 5 to 6 mmHg reduction in diastolic blood pressure has been shown to reduce the risk of coronary artery disease (CAD) by 16% [21]. It has however, been projected that with the epidemiological transition in disease pattern being experienced in many parts of sub-Saharan Africa [23], CAD is likely to play a more significant role in the burden of disease in Nigeria in the future.

To ascertain the future role of CAD in Nigeria, we risk stratified consecutive hypertensive subjects undergoing specialist cardiology review in a major tertiary referral hospital in Nigeria, according to 10 year Framingham risk criteria.

We prospectively studied every consecutive patient referred for the first time to the Cardiology Clinic of the University of Abuja Teaching Hospital with a diagnosis of hypertension from April 2006 to August 2013. These patients were typically referred by General and Family Physicians in Primary and Secondary Healthcare facilities including both the public and private sector. The patients included public servants, traders, businessmen, politicians, farmers, artisans and retired public servants. A total of 2275 subjects were recruited for the study with an average recruitment of 28 per month. Subjects with established cardiovascular disease including prior documented stroke, coronary artery disease, heart failure and chronic kidney disease which represented 30% of the total subjects recruited were excluded from the study. This left 1571 hypertensive subjects with no documented vascular disease or chronic kidney disease at baseline, of whom 110(7%) were diabetic.

Using a standardized questionnaire, baseline demographic and clinical characteristics of patients were obtained. In order to minimize selection bias, data were collected on a consecutive patient basis. Information obtained from the patients included gender, age, prior history of hypertension or diabetes mellitus and family history of hypertension or diabetes mellitus. Other information collected was past or present history of myocardial infarction, angina pectoris, stroke, heart failure and renal failure. Pharmacological treatment was determined by the treating clinician.

Each subject had a complete physical examination including height and weight measurements. Blood pressure measurement was according to standard guidelines with a mercury sphygmomanometer (Accosson, London, UK). Systolic and diastolic blood pressures was measured using Korotkof sounds I and V. Blood pressure was measured at the right arm three times, with a 5 minute rest between each measurement. The diagnosis of hypertension was made when the average of three blood pressure measurements was ≥ 140/90 mmHg or the subject had been previously diagnosed with hypertension and was on antihypertensive therapy. Subjects were asked to fast for 8-12 hours before blood sample collection. Blood chemical analysis was performed at a certified central laboratory. Fasting blood glucose and lipids were analysed enzymatically by auto analyzer (Erber Spectrophotometer). This study complied with the Declaration of Helsinki and all participants provided written informed consent and the study was approved by the University of Abuja Teaching Hospital Ethics Committee.

The specific 10-year risk of CAD was calculated (as a specific percentage score) in all the subjects according to the Framingham Risk Stratification algorithm including age, gender, total and high-density lipoprotein-cholesterol, systolic blood pressure, and cigarette smoking. Subjects were then classified as <10% (low risk), 10-20% (intermediate risk) and >20% (high risk). The Framingham risk score has been found to perform well in African Americans which is a population that has the same ancestry origin as our subjects [24].

SPSS software version 16.0 (SPSS Inc, Chicago, IL) was used for statistical analysis. Continuous variables were expressed as mean ±SD. We compared the distribution of the three risk groups and related the distribution to the sex of the subjects and the presence or absence of diabetes mellitus. We also compared the demographic and clinical characteristics of the subjects using student t-test. A 2-tailed p value<0.05 was considered significant.

Demographic and clinical characteristics of the subjects

Table 1 shows the demographic and clinical characteristics of the subjects and also by gender. This was a predominantly middle-aged cohort (mean age 50.1 ± 12.6 years), 53% women and predominantly overweight (mean BMI 28.9 ± 6.7 kg/m2).

Table 1: Demographic and clinical characteristics of all the subjects by gender.

Distribution of risk stratification in all the subjects 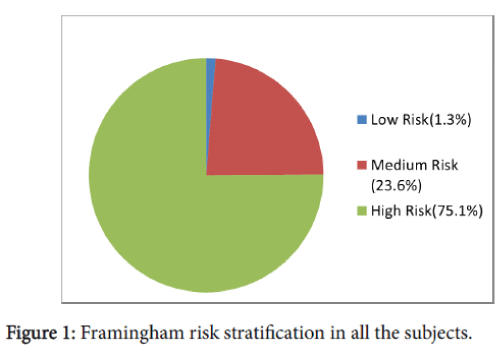 Figure 1: Framingham risk stratification in all the subjects.

Distribution of risk stratification in all the subjects

Table 2 shows the increasing trend in the proportion of subjects classified in the highest risk category when the average age of the cohort is hypothetically increased by 5 years at a time to a maximum of 10 years. The high risk category increased from 1.3% to 21.3% when 10 years was added to the original age of subjects.

Table 2: Comparison of framingham risk score in the cohort with progressive ages.

Distribution of risk stratification in the subjects by gender 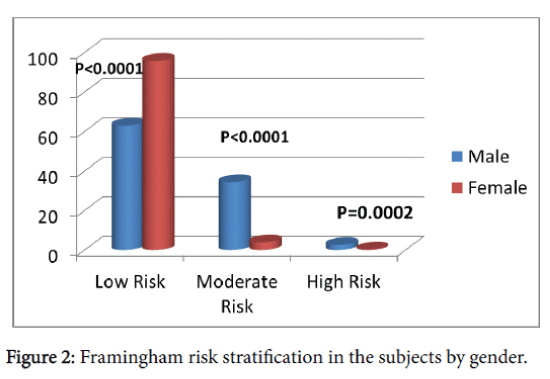 Figure 2: Framingham risk stratification in the subjects by gender. 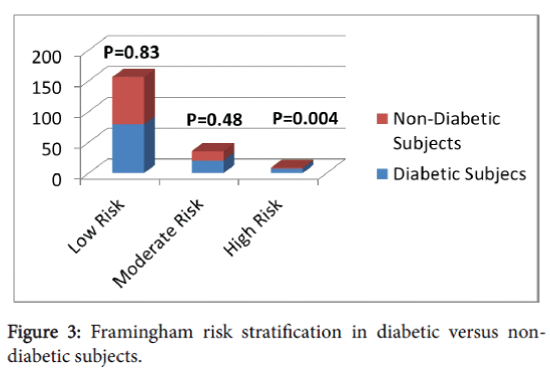 Consistent with a relatively low prevalence of CAD in Nigeria, amongst a large cohort of individuals with newly diagnosed hypertension, we found that only 1.3% of our subjects were classified as being at high risk of developing CAD in the next ten years according to Framingham criteria. The remainders were either at intermediate (approximately one quarter) or low risk (approximately three quarters of the cohort) for such an outcome.

Our female subjects were at lower risk of developing coronary artery disease compared to male subjects similar to previous report [31]. This is most likely due to the younger age and higher smoking rates in men. The female subjects were however found to have higher total cholesterol and triglyceride levels, similar to previous report in African Americans [32]. We found our diabetic subjects to be at a higher risk of developing coronary artery disease when compared to non-diabetic subjects. This finding is not surprising as diabetes mellitus is a strong risk factor for ischemic heart disease [32-34].

With recent westernization and improvements in the control of infectious diseases in most parts of Sub-saharan Africa, life expectancy in Nigeria is most likely going to increase. Such an increase in the aging population fuelled by changing diet from westernization means that a higher proportion of our hypertensive subjects will develop CAD in the near future. This will mean triple burden of cardiovascular disease from not only hypertensive heart failure and stroke but also from coronary artery disease.

Therefore, apart from increasing public health education on life style modification to stem the trend of changing lifestyle and diet, there might be the need for additional catheterization laboratories (presently there are only two publicly run catheterization laboratories in Nigeria). This will obviously involve planning and appropriation of resources especially in the face of increasing burden of hypertensive heart failure and stroke in this population group [35].

Since Framingham Risk Score was used to risk stratify our subjects, BMI was not taken into account. In addition, risk factors such as family history of premature cardiovascular disease, obesity, high sensitivity Creactive protein, homocysteine, cytokines, hypertriglyceridemia, impaired glucose tolerance and obesity were not taken into account. There would have also been under estimation of risk score in subjects with severe hypertension (systolic blood pressure >180 mmHg and/or DBP>110 mmHg) or associated target organ damage. However, the fact that Framingham risk score is the only risk score that has been validated in African Americans who have the same ancestry origin as our subjects makes it the most suitable risk scoring system for our subjects.

Whilst the risk of developing coronary artery disease in hypertensive subjects presenting to a major teaching hospital in Nigeria appears to be substantially lower compared to European and North American cohorts, one in four subjects were nonetheless classified as intermediate or high risk. This emphasizes the need to address emerging risk factors including smoking and obesity, and the need to consider absolute risk to guide treatment decisions in countries undergoing epidemiological transition.

Our sincere appreciation goes to all members of staff of Cardiology Unit, Department of Medicine, University of Abuja Teaching Hospital, Gwagwalada, Abuja.