Copyright: © 2015 Singh R, et al. This is an open-access article distributed under the terms of the Creative Commons Attribution License, which permits unrestricted use, distribution, and reproduction in any medium, provided the original author and source are credited.

Kashmir catfish, Glyptothorax kashmirensis, is a critically endangered fresh water fish species in Asia. Wild populations are severely declined due to habitat loss (breeding and nursery grounds), dam construction, overexploitation and introduction of exotic species leading to an alarming situation, which deserves high conservation consideration. The present paper enlightens the previous work done and recommends conservation actions that should be taken into account towards the preservation of the wild population of G. kashmirensis.

Glyptothorax kashmirensis is a benthopelagic freshwater fish belongs to family Sisoridae [5,6] and known for its good taste and has local trade value [7]. The catfish is found attached to small or large boulders and rocks or rocky stream beds in fast flowing torrential hill river and streams. Due to construction of several dams (which contributes to habitat alternation) in area of species occurrence negatively affect the population in several locations due to which the species in now under critically endangered category of IUCN [8], predicting a decline of greater than 80% over the next five to ten years if present treats (damming, introduction of exotic species, overexploitation, etc.) continuous in future [9]. So, immediate efforts are needed to sustain the wild population of G. kashmirensis.

It is a commercially important food fish in Asian countries because of its relished taste and also involved in local trade [7]. 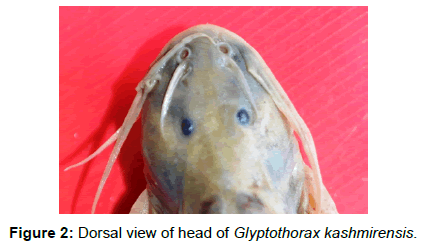 The population of G. kashmirensis is continuously decline at a rate of approximately 5 % (in 15 years) foretold to be affected in the next 5-10 years from dam construction (together with the previously built Mangla dam) and habitat destruction [7,9]. Being fast flowing specialist in torrential hill rivers and streams, dam construction will modify its habitat irretrievably affecting population drastically. Furthermore, release of exotic species (creates competition for food, space, etc.) by fisheries department to their natural environment may drive the species to local extinctions in a number of or most locations [9]

Complete data on its biology is still scarce; however, few reports are available in the previous literature. G. kashmirensis is a benthopelagic hill stream fish inhabits cold and fast flowing water (rheophilic species) with a substrate of sand/gravel and rocks [5]. Feeding habit is omnivorous and a bottom feeder in nature [7,23]. This species feeds on benthos and zooplanktons [24] and spends most of the time burrowing into the gravel bottom but comes to the surface during heavy rain and catch is greater during the rainy period.

G. kashmirensis breeds during June and July in lower reaches of the River (Jhelum) on gravel/ sandy beds and roots of somewhat submerged plants [23]. This is to avoid mortality of eggs, larvae and fry caused by high water currents in upper reaches of the river. Fecundity of G. kashmirensis ranges from 692 to 1392 with an average value of 1070 eggs (aveg. length = 9.4 cm and Weight = 12.29 gm). The number of eggs per gram of body weight is approximately 87 [23]. Mark sexual dimorphism is present in this species [15].

Length–weight relationships (LWRs) are extensively used in fisheries studies for assessing the weight for a given length of a distinct fish and the biomass when the length–frequency distribution is known [25,26]. Sharma et al. [27] firstly studied the length-weight relationship of Glyptothorax kashmirensis from Poonch River, Western Indian Himalaya and reported the value of ‘a’ as 0.0147 and 3.02 for ‘b’ which suggests positive allometric growth in riverine population. Maximum reported size of fish is 14.84 cm (W = 48.19 g) [27]. Other than this, there is no record of such relationship in the literature.

The populations of G. kashmirensis from rivers have severely declined or are on the verge of extinction due to habitat loss (breeding and nursery grounds) and the potential introduction of exotic invasive fish species. Being a fast flowing river specialist, construction of the dam will alter the flow regime of the river that ultimately affects the fish population drastically [7,9]. Other anthropogenic activities, pesticides run off, and overexploitation (by indiscriminate fishing) and local trade are also reasons for declining the population of this species [7]. Due to several proposed dams on River Jhelum, there is a potential threat to species as well as its habitat in next 3-5 years. A foretold decline of more than 80% over the next five to ten years is expected due to the above severe, constant threats [9]. A comprehensive strategy, therefore, needs to be evolved for conservation.

We acknowledge the local fisherman for their valuable help during the study period.