Copyright: © 2016 Perschbacher P, et al. This is an open-access article distributed under the terms of the Creative Commons Attribution License, which permits unrestricted use, distribution, and reproduction in any medium, provided the original author and source are credited.

The objective of this study was to evaluate annual patterns in water quality in 9 commercial golden shiner (Notemigonous crysoleucas) ponds at three farms located in central Arkansas. Water samples were collected on 57 occasions during two consecutive years, including weekly sampling during stocking seasons (March-May) and production seasons (June-October) and bimonthly for the remaining four months. Samples from all ponds at each date were taken between 0900-1100 h with a column sampler, stored in an insulated sealed cooler, and returned to the University of Arkansas at Pine Bluff for analyses. Evaluations were made of 18 variables: water temperature (Temp), dissolved oxygen (DO), pH, total dissolved solids (TDS), total ammonia-nitrogen (TAN), un-ionized ammonia (UIA), nitrite ammonia-nitrogen (NO2), chlorophyll-a (Chla), phaeophytin-a (Pheo), phytoplankton enumeration by genera (species for cyanobacteria) and zooplankton enumeration by major groups. Significant differences by month were found in all variables. Correlation analyses were performed for all data, and by stocking and production seasons-which resulted in a large number of significant correlations.

Baitfish production in ponds is highly variable [1]. Extreme differences in nutrient inputs from source water, pond soils and historic fertilization practices, and farm management practices could contribute to much of the variation [1-4]. Golden shiner (Notemigonous crysoleucas) is the major baitfish and production, while generally profitable, is often risky due to lack of food resources, poor water quality or associated diseases [5]. Accordingly, Ludwig [5] conducted a study during the growing season of June to October of chemical and biological dynamics in experimental ponds with and without golden shiners for intensive production. He found no stressful conditions, however a negative correlation between rotifer concentration and pH was observed. Experimental studies of water quality in baitfish ponds have also been performed in a catfish production multiple pond system, where one pond contained another major baitfish, fathead minnows (Pimephales promelas) [6], and in golden shiner production ponds with water circulation [7]. In commercial baitfish ponds, Stone et al. [8] studied water quality levels in spawning mats and Kelly and Kumaran [9] examined pond bottom hydrogen sulfide concentrations and its relationship to golden shiner survival. Chen et al. [10] focused on pH to address “disappearance syndrome” in golden shiner ponds from June to October, and pH effects on goldfish (Carassius auratus) fry [11]. However, no studies on water quality and natural production by season and management practice occurring in commercial baitfish ponds have been conducted. Stone and Rowan [7] emphasized the importance of such studies to determine needs for water quality improvements, including, water circulation.

Feeding and fertilization in baitfish ponds is variable, depending on water temperature and management practices. These are the major nutrient inputs. As much of nutrients in consumed feed are excreted back into the water, it contributes to a degradation of water quality. Stone et al. [12] warned of low oxygen levels from algal fluctuations, and of the need to monitor and provide aeration. Toxic un-ionized ammonia (UIA) percentages and concentrations in culture ponds is determined by pH and water temperature – the most problematic environmental determinant of water quality in culture ponds. At high and low concentrations, pH alone is toxic to fry in baitfish ponds [11].

Natural foods, including zooplankton, are of concern as they contribute more than 40% to golden shiner nutrition, even when fed [13]. While natural zooplankton is important from a nutritional standpoint, not all zooplankton are beneficial. Some zooplankton (ie. cyclopoid copepods) are major predators of fry as well [14]. Cyanobacteria (blue green algae) are undesirable phytoplankton, providing poor nutrition to the fish, and cyanobacteria are prone to suddenly die. In ponds with heavy blue green algae blooms during June, July and August, fish lethargy and mortalities may result [12].

This study was designed to provide needed water quality and plankton base line data for baitfish ponds by extending Ludwig’s golden shiner study [5] of a single growing season to the entire year and for two consecutive years on three commercial golden shiner farms. Also following Ludwig [5], this study examined correlations of water quality and natural foods within the data set.

Water quality and plankton samples from three ponds each on three commercial golden shiner farms were obtained on 57 occasions. All ponds were sampled bimonthly or weekly, from 09:00-11:00 h from November 2008 to October 2010, focusing on the stocking seasons (March-May) and production seasons (June-October). Farms were chosen within a 16 km radius of Lonoke, AR with similar management practices typical of golden shiner commercial production. Pond sizes ranged from 3.6 to 9.7 ha and were earthen ponds of less than 1 m average depths. Information on feeding, fertilizations, harvests, and pond sizes are arranged in Table 1. Samples were taken with a 90 cm water column sampler, kept in sealed, opaque plastic bottles in an insulated cooler, and returned to the University of Arkansas at Pine Bluff (UAPB) Aquaculture Research Station Hatchery Research and Development (HRD) laboratory for immediate processing. Measurements included dissolved oxygen (DO), water temperature (Temp), total dissolved solid (TDS), and pH with a multiprobe meter (YSI, Yellow Springs, OH). Hach colorimeter techniques (Hach Co., Boulder, CO) were used for total ammonia-nitrogen (TAN), and nitrite-nitrogen (NO2-N). Un-ionized ammonia concentrations were subsequently calculated with an online formula from TDS, TAN, pH and Temperature (Temp). Chlorophyll a (Chla) corrected for pheophytin a (Pheo) [15] was determined with 1-nm bandwith uv-vis Helios Omega spectrophotometer (Thermo Fisher Scientific, Waltham, MA). Phytoplankton composition and numbers of natural units were determined by placing 1-ml of well mixed sample water onto a Sedwick rafter cell with a Whipple grid at 150 X. Zooplankton sampling, preservation, and enumeration by major groups followed the procedures of Ludwig [5]. Water quality testing methods followed standard methods [15], with the exception of ethanol as a solvent for Chla [16].

The experimental design was a randomized completely block design (RCBD). Farm was a blocking factor. Data were analyzed by Analysis of Variance (ANOVA) in RCBD using PROC MIXED of the Statistical Analysis System, version 9.2 (SAS Institute Inc., Cary, North Carolina) to assess the influence of month on the water quality variables and plankton concentration. Correlation analyses were used to determine correlation between water quality variables and plankton from the two year data set and in periods receiving additional attention: March-May (i.e., stocking season) and June-Oct. (i.e., production season). Correlations of r>0.6 were considered to be high correlations. Johnson [17] stated absolute value of r ≥ 0.60 for any pairs in a correlation analysis are large enough to be considered important linear relationship.

Mean water temperature ranged from a low of 7.46°C in January to a high of 28.61°C. Mean DO values were highest in December and January. Lowest readings occurred June-September, and values below 3 mg/l were found in three different ponds. Morning pH ranged from 7.05 on January 10, 2008 to 10.13 on July 20, 2010. Although mean TAN was highest in Feb., UIA was highest during June, when mean pH was 8.78 and water temperature averaged 28.61 (Figure 1). Mean concentrations of TDS and nitrite tended to increase from spring to fall, and were highest in September and October, and December, respectively.

Zooplankton communities mainly consisted of rotifer (Roti), which peaked in April, were high May to August, and then declined. Nauplii (Naup) were most abundant in May and June. Cladoceran (Clad), calanoid copepod (Cala), and cyclopoid copepod (Cycl) counts were generally highest from May to August (Figure 3).

The DO range obtained in this study, 2.02-15.81 mg/l, was slightly lower than the 6.5-17.3 mg/l range reported by Ludwig, and the pH range higher. The pH was generally within the acceptable range (5.5- 10.0) [18], with the exception of a 10.13 value on July 20 and a 10.12 value on August 18, 2010. However, these are morning values and were undoubtedly higher in the afternoon and would have far exceeded the 9.99 pH level which was found to be lethal to goldfish fry during abrupt pH change [11]. They recommend checking pH levels before stocking, and stocking in the morning when pH is relatively low. During the stocking season, pH exceeded 9.5 on two occasions. Concentrations of TAN were relatively stable over the study, as observed by Ludwig [5]. However, UIA (Figure 1) increased during spring stocking season and decreased in the summer production season, along with pH. Sink [19] experimentally determined golden shiners are more susceptible to toxic UIA concentrations as pH increased: at pH 9.0, the 72-h LC50 was 0.75 mg/l versus 1.06 mg/l at pH 7.0. Un-ionized ammonia levels were lower than the lethal levels reported by Sink. There is considerable variation in TDS among surveyed well waters in central Arkansas, ranging from 130 to 676 mg/L [20], so this inherent variability in source water would show up in the data. Nitrite observed over the course of this study was much lower than the 0-0.02 mg/L reported by Ludwig [5].

The mean Chla concentrations measured from June to October in this study (0.010-0.79 mg/L) were much higher than (0.06-0.12 mg/L) reported by Ludwig [5] at ponds at fish farming experimental laboratory, Stuttgart, Arkansas. Nutrients present in the supply water, some well waters in the central Arkansas area have elevated levels of phosphorus as well as some nitrogen [20]. Thus phytoplankton bloom density (Chla) could be due to loading from the water supply (immediate or delayed in freshly filling ponds – first the phosphate precipitates, then is mobilized under anaerobic conditions, later in the production season [21].

Un-ionized ammonia and pH were highly correlated during both the production season and stocking season (r=0.85 versus r= 0.88). Interestingly, during the summer season, the correlation between increased TDS and reduced pH was significant. At TDS levels of about 175 ppm and higher, pH levels were below 8.7 (Figure 1). By increasing TDS (e.g., liming), high pH may be reduced (i.e., buffered) which would aid in reducing concentrations of toxic UIA. 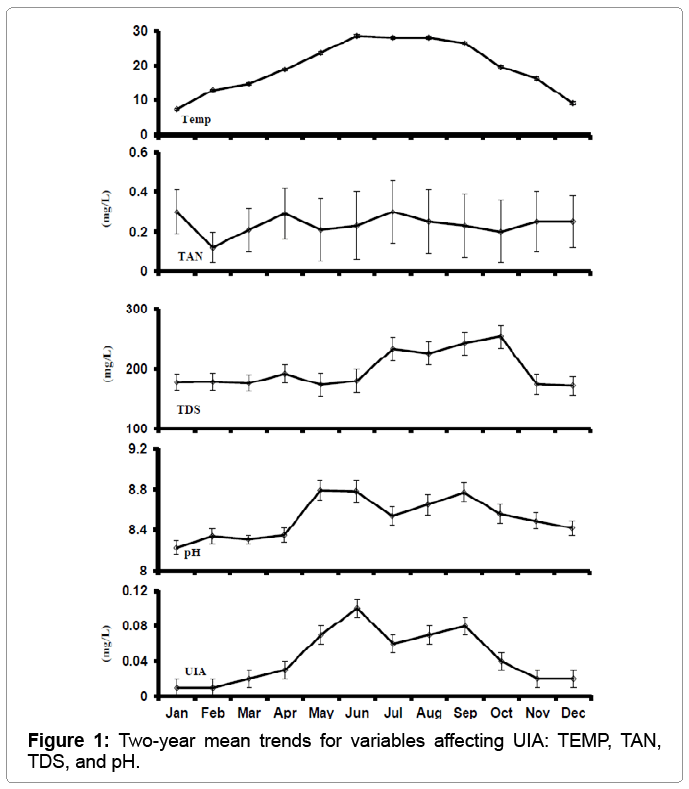 Cyanobacteria can be problematic in baitfish ponds. Cyanobacteria blooms tend to be unstable, with massive die-offs, or “crashes,” occurring which lead to poor water quality for a period of time. Baitfish gill disease and toxins from cyanobacteria have also been suspected, but are not well known. Cyanobacteria were the major algal group encountered by numbers (Figure 2) and biomass, and as reflected in the positive correlations (Tables 2 and 3) between numbers and chlorophyll seen in the stocking season (r=0.68) and production season (r=0.68). 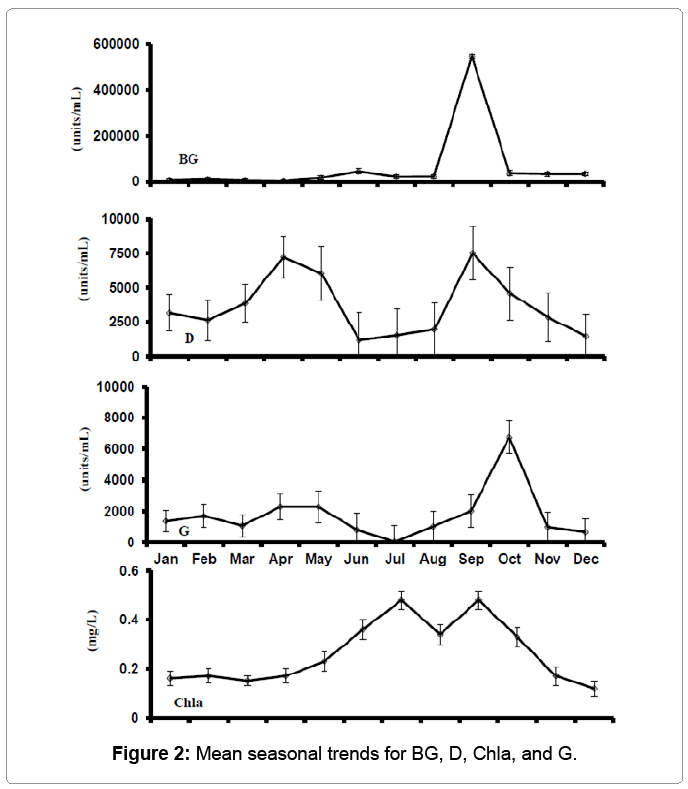 The close relationship between Totalzoo and Roti measured in the study (r=0.87 to r=0.89) was similar to those observed by Ludwig [5]. Similarly, numbers of the other zooplankton groups declined over the production season; however, no correlation was found between rotifers and pH.

Overall water quality variables in this study followed the normal pattern of golden shiner ponds in central Arkansas. Fish stress was suspected during the month of June, when morning, UIA averaged 0.12 mg/L. Highest UIA was recorded on August 18 of 0.485 mg/L, and in three ponds on March 20 UIA exceeded 0.200 mg/L. Lowest DO was recorded June 8 of 2.02 mg/L, and DO below 3.00 mg/l was recorded on a total of 3 dates. Morning pH exceeding 9.5 was noted on 10 occasions in 5 different ponds throughout the two-year sampling, including on two occasions during the stocking season. These were morning values, and in the afternoon were expected to exceed the pH level of concern for stocking fry of 10.0. During July and August, morning pH exceeded 10.0 on two occasions. Therefore, before stocking pH should be checked and stocking should be done in the morning when pH is lower as suggested by Chen et al. [11] for goldfish fry.

Correlation results indicated cool weather water quality is influenced by physical factors, such as water temperature, and warm season water quality by biological factors, such as phytoplankton. This pattern would also be expected in extensive systems other than for baitfish production (e.g., fry and fingerling production), and especially in temperate regions such as Arkansas.