Copyright: © 2013 Severeyn YG, et al. This is an open-access article distributed under the terms of the Creative Commons Attribution License, which permits unrestricted use, distribution, and reproduction in any medium, provided the original author and source are credited.

The success of fecundation of the mature ovocites is a key factor to maximize the reproduction. This process in aquatic invertebrates depends on several factors such as the distribution, density and the individuals’ behavior, the necessary density of sperms to fecundate the eggs, the longevity and the behavior of the gametes [1,2]. There are not only complex interactions among these biological factors but also with the physical properties and the dynamics of the aquatic environment [3]. Before a wide interval of sperm concentrations, the fecundation rates can diminish quickly when the sperms are diluted in the waster column and because they also become less active with time. To counteract the dilution of the gametes and to maximize the fecundation rates, the aquatic animals, after a natural spawn, have developed strategies which increase the probabilities of a successful fertilization [1].

Until the publication of the classic study of Levitan [1], the literature on the study of the factors that could maximize the fecundation in aquatic invertebrates was scarce and dispersed. Nonetheless it is surprising that his paper did not mention any mollusk species when almost 30 years before started this type of studies in pectinid bivalve mollusks [5]. These authors studied the best sperm and ovocites concentrations to get viable larvae of Pecten maximus.

In the present investigation we studied the marine clam Tivela mactroides, a marine bivalve mollusk, and candidate to be cultivated in order to recover its natural banks in the southwest of the Venezuelan Gulf. These banks were decimated by a spill of petroleum in 1997 [6]. The objective was to optimize the production of embryos using, as high-priority factors, the concentration of sperms and the time lapsed after having been induced the contact among the gametes. The final objective of this and following investigations is to obtain viable larvae that can be used to repopulate the area affected by the oil spill.

The clams were gathered in the beach Miramar, an area of about two Km2 of coast which occupies an arid-coastal plain. It is a high energy beach and strong surf located to the north in the capital of the Municipality Buchivacoa, Capatárida Falcon. (11°13 `53 ``North and 70°36 `51 `` West). This population of T. mactroides is located to 300 Km. east of the area affected by the spill and it still remains as a pristine area, only being exploited by artisanal fishermen.

The animals were collected by means of a trail with a mesh diameter of 20 mm. In some occasions the fishing was made manually. During the samplings, the quantity and size of the gathered clams was made at random, since the size of the animal is independent of the sexual maturity [7]. Of the gathered clams, 100 were placed into 20 L. plastic containers, with oxygen and water of the collecting size cooled with pack of ice. This was done to avoid as much as possible stress during their transfer by car to the laboratory thus avoiding that clams may have spontaneous spawning.

Obtaining of the gametes

To obtain the gametes, the clams were opened up by dissection, and their gonads observed under the microscope to identify the sex. Only mature male and female gametes were used to produce fertilization. For this procedure, gonads were carefully perforated with a sterile microscissor to liberate the gametes. Them gonads were washed out and collected into Erlenmeyer. Ovocites were filled with 50 ml and sperm with 180 ml of artificial seawater (Instant Ocean) prepared to 40 ups to create the stock solution.

Obtaining of the experimental concentrations of the gametes

To estimate the concentration of sperms and ovocites in the stock solutions there were taken, 3 times, 5 ml of each solution, which were preserved with five drops of 10% formalin solution. Later on, with a camera of New bauer, the gametes were counted. The mean of the three replicates was taken as the concentration of each solution: 5.8×109 spermatozoids/ml, and 5.5×106 ovocites/ml. Starting from the stock solutions, there were carried out the dilutions to obtain the concentration series of sperms to study. In order to do them, there were prepared 10 dilutions adding to each rehearsal tube from 9 to 1 ml of artificial seawater to 40 ups and a series from 1 to 9 ml of the solution stock of sperms. Two controls of 1 ml of ovocites solution were set, the first one without sperms to discard that this species does not present parthenogenesis, and the second one with sperms previously inactivates through freezing at 0°C during 4 hours, with the purpose of observing if the sperm contains some protein that intervenes or stimulates the fecundation process.

Induction of the fecundation

After carrying out the dilutions of sperms, 1 ml of the ovocites solution stock was placed in each one of the rehearsal tubes with the respective concentrations to induce the fecundation. The experiments stayed to 28 ± 1°C in an environmental cabinet, during five hours starting from the mixture of the gametes. Each experiment was carried out with three replicates. Once united the gametes, there were taken samples of 0.05 ml at 30 minutes, three and five hours, placed in an excavated slide and examined under microscope. In this observations there were recorded the total number of ovocites, fecundated ovocites, those not fecundated and the embryos in division.

Effect of the concentration of sperms

A notable result of this investigation was the high variability that was observed in the percentage of fecundation among the studied concentrations. Indeed, although the observed maximum value was of 50% in two single replicates, 33% of all experimental concentrations there was not fecundation of all. For this reason, the non-parametric analysis of variant (Kruskal-Wallis) did not detect significant differences among the studied concentrations (p = 0.8854). The maximum mean fertilization percentage, 22%, was observed between 1.3×107 and 1.7×107 spermatozoids/ml (Figure 1). Above or below these values, the fecundation decayed notably. 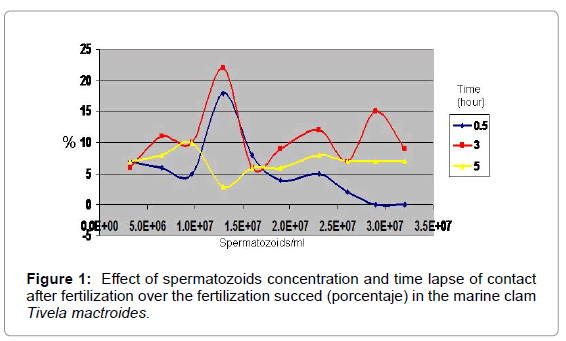 Figure 1: Effect of spermatozoids concentration and time lapse of contact after fertilization over the fertilization succed (porcentaje) in the marine clam Tivela mactroides.

Effect of the time lapsed over fecundation

In aquatic invertebrates, the fecundation success depends on many factors both internal as external to the gametes. To this respect, Levitan [1] points out four groups of factors: environmental, poblacional, individual and specifically internal (genetics) to the gametes. Products of the interaction of the first three categories are generated three conditions that have to do directly with the gametes: the concentration of these in the aquatic means, their dispersion rate (ability to swim longer distances) and the grade of mixture of the gametes of different animals. To these three conditions, the same author adds the intrinsic factors to the gametes: variation in the individual acting (for example longevity), the variation in the size and the form of the eggs, the morphology of the sperms and the rate of collisions among gametes.

In the present study, only two of the mentioned factors were investigated: The concentration of spermatozoids and the time lapsed after having induced the contact among the gametes (an indirect way to measure the effect of sperm longevity).

With regard to the first factor, it was already indicated that the results showed a lot of variability, so statistically speaking, no significant differences was detected among the studied sperm concentrations. These results coincide with other studies in several aspects.

The second aspect evaluated in this investigation with regard to the success of the fecundation was the necessary time to obtain the maximum fecundation percentage. As demonstrated above, three hours was the necessary time to maximize the quantity of fecundated ovocites. This time of maximum fecundation coincides with studied in other bivalve where the range goes from 10 minutes to six hours [2,14-16], but it is evident that this wide range should be product of other factors not evaluated in these researches.

Considering the main objective of the present study, is not conclusive which is the optimal concentration of sperms to maximize embryos production. However it is also clear that it is not the only necessary factor to achieve high percentages of fecundation in Tivela mactroides. Time of contact (longevity of spermatozoid) is also important as we saw in the present results. Both factors together but they do not work alone to affect the success of the fecundation measured as formation of viable embryos. Additional research is necessary to clear this situation.

Considering the necessity to produce the biggest possible number of viable embryos, the range of concentrations of sperms that maximized the fecundation in this investigation was between 1.3 and 1.7×107 spermatozoids/ml after three hours of contact among gametes. Half hour turned out to be little time, but five hours they did not improve the success of fecundation above three hours.