2School of Biomedical Sciences, The University of Queensland, Brisbane, Australia

Copyright: © 2012 Kaushal TR, et al. This is an open-access article distributed under the terms of the Creative Commons Attribution License, which permits unrestricted use, distribution, and reproduction in any medium, provided the original author and source are credited.

The present study explored the association between dietary, drinking water, drinking (alcohol) and sedentary lifestyle habits with gastroenteritis in population of Sikkim. Data were collected with help of a detailed questionnaire from 2000 urban and rural people, aged more than 15 years. Our study found that gastroenteritis is widespread in Sikkim, with the most common disorders being amoebiasis, food-poisoning, gastric ulcer and cholera. The results show that drinking water and alcohol are major risk factors for gastroenteritis than food habits like vegetarian or non-vegetarian diet and working habits. Study also indicates the role of ethnic fermented foods in gastroenteritis, which needs further experimental validation.

Sikkim is a mountainous state in the eastern Himalayas of 7096 sq.km with a population of 607,688 by the 2011 Census [1]. The people of Sikkim have had significant socio-cultural interactions with neighboring states for centuries as Sikkim shares boundaries with China (Tibet), Bhutan, Nepal and the Indian state of West Bengal. The gender ratio is 889 females for every 1000 males [1].

Sikkim is a mixed bowl of culture where many ethic tribes have evolved their cultural identity with different food and drinking habits. As of informal estimate, alcohol use has conventionally been prevalent among Sikkim’s population. National Family Health Survey-2, Government of India, has tinted a significant pervasiveness of alcohol use in Sikkim, 32% and 17% among above 15 years of age males and females, respectively [2]. The consumption of alcohol is more prevalent in rural areas compared to urban areas and it is negatively related to level of education and socioeconomic condition [2].

Most of the population of Sikkim is non-vegetarian with only 11.7% reporting as vegetarian [3]. Traditional fermented foods are an important component of the diet of the people of Sikkim [4]. The per capita consumption of ethnic fermented foods and beverages in Sikkim is 163.8 g/day, comprising 12.6% of total food intake [4]. The addition of microorganisms in the diet, as in fermented foods, could change the gastrointestinal micro-biota. Microorganisms are critical to the function of the gastrointestinal tract (GIT) to help in digestion of foods. However, the presence of pathogenic bacteria and viruses in the GIT can cause the symptoms of gastroenteritis including abdominal cramps, nausea and vomiting, diarrhea, loss of appetite, weakness, fever or chills and dehydration [5].

The most Sikkim’s population generally complains of stomach pain, showing largely the symptoms of gastro-tract infections. Gastrointestinal tract infections can be caused by viruses, bacteria, protozoa, helminthes and rarely fungi. The lifestyle factors such as drinking habits, sedentary working style, dietary pattern, food type may contribution to the diseased condition. The baseline data of the prevalence of GIT infections and the risk factors associated with GIT infections among Sikkim’s population is not available and therefore requires immediate attention.

It was a cross-sectional study with stratified random design, carried out in the month of July-August, 2011. Total 2000 individuals were involved as respondents, from various sections of society. The main objective of the present study was to check the prevalence of four major GITs and the risk factors associated with GITs in Sikkim.

Study place: The present study was conducted Sikkim (North- Eastern part of India), at random locations in and around Gangtok (State capital).

Sampling- stratified random sampling method was followed to cover all sections of the society: In stratified random sampling, public locations in Sikkim, in and around Gangtok, were selected including villages, markets, cinema halls, colleges, offices, hotels, taxi stands, hydro-power project, rehabilitation centre and hospitals. Adequate care was taken to incorporate all strata of society with all individuals more than 15 years old. A total of 2000 people were interviewed for the study from which 1918 valid complete entries were used for analyses.

The sampling contained 48% of the respondents from rural areas and 52% from urban areas, although there is very little distinction between urban and rural population in population of Sikkim, except North district. Out of total respondents, 473 (24%) individuals were found with at least one gastrointestinal infection in the past one year, which indicate that GIT infections are common in Sikkim with almost 1 out of 4 people reporting GIT infections in the present studies. Of these, 37% respondents had medical history of amoebiasis in last one year, followed by food-poisoning (32%), peptic ulcer (16%) and cholera (15%) (Figure 1). 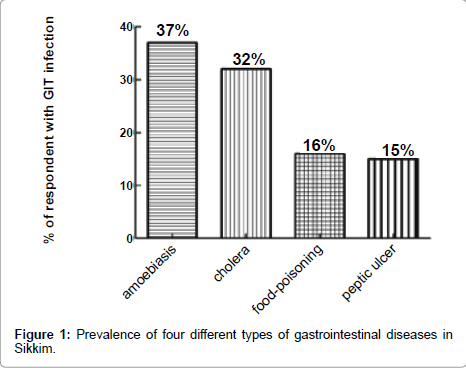 In our study, we found that 14% respondents regularly consumed raw (untreated) water, 20% filtered water, 60% boiled water and 6% purified water (multiple treatments with help of water purifier like Aqua guard, Kent etc.) (Figure 2). 65.8% of the people who consume raw water reported history of at least one type of GIT infection (Table 1). Out of rest 86% respondents who consume treated water, only 18% had history of GIT infections. Thus, proportion of GIT infections was higher in persons drinking untreated water (1.0817 relative risk) (Table 1). 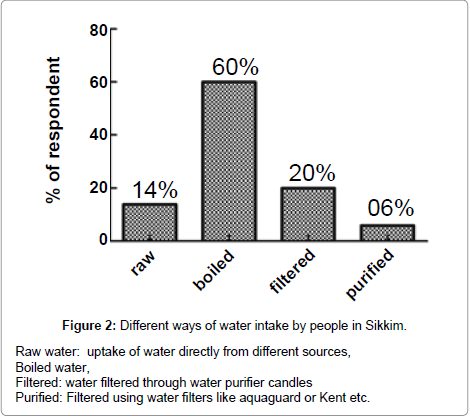 Figure 2: Different ways of water intake by people in Sikkim.

Gastrointestinal Tract infections are one of the major health concerns in many parts of world, including India. The main symptoms of GIT infections are abdominal cramps, nausea and vomiting, diarrhea, loss of appetite, weakness, fever or chills and dehydration which arise mainly due to bacterial, viral and parasitic infections [6]. Quite often the main causes of these infections are due to consumption of contaminated water and food which leads to water-borne diseases. The water is one of the most common routes of transmission of several diseases, especially GIT infections. The most often reported disease associated with drinking water is gastroenteritis and the attack rates for these infections can reach over 50% of the exposed population [7].

Water quality of almost all the drinking water resources in East and South Sikkim districts is poor and many people especially in rural areas are not aware of it [8]. Further, the rate of urbanization and industrialization is very fast in East and South Sikkim (majority of the respondents belong to these districts), which might be one of the reasons to cause water pollution by untreated sewage and industrial effluents, leading to higher incidence of water-borne gastroenteritis in Sikkim. Although many people (95%) use treated water, almost 50% of these are affected with GIT infections. Therefore it clearly indicates risk factors other than drinking water involved in GIT infections in Sikkim.

Working habit and physical activity plays very important role in human health. Sedentary lifestyle tends to suffer from obesity because of less physical activities [9] subsequently leading to a wide range of disease, including gastrointestinal diseases, gastro-esophageal reflux disease, Barrett’s esophagus, erosive esophagitis [10-12]. Due to hilly terrain and not much developed transportation system in Sikkim, people in Sikkim need to do compulsory exercise of climbing up and down as part of daily life. Probably this is the reason why there is hardly anybody in Sikkim found with sedentary lifestyle. Hence, working habit (light, moderate or heavy) does not pose a risk factor and found to be insignificant (0. 9598 relative risk).

Along with quality of water, food habits and type usually play a very important role in the health of an individual. In Sikkim, nonvegetarian diet and consumption of ethnic/traditional fermented food is very popular. Although from Table 1, it may appear that out of total GIT infections, majority are non-vegetarians as compared to vegetarians, relative risk calculations do not indicate non-vegetarian food as a risk factor for GIT infections. The reason behind this can be, as majority of the people are non-vegetarian, turn-over period of meat must be very less and hence chance of getting stale and contaminated meat seems less.

Fermented foods are prepared from the raw ingredients of the plant or animal sources either by naturally or by mixing the starter culture (s) containing mainly Lactic Acid Bacteria (LAB) [13,14]. LAB plays important roles in digestion, absorption of nutrients and immunity. However, acquired antibiotic resistance in lactobacilli from fermented milk products, pickles and meat has been reported commonly in recent years [5,15-17,18]. Fermented foods like gundruk (dried and decayed leaves of mustard oil plant and spinach), sinki (radish that is decayed and dried) and kinema (fermented soya beans) not only cause gastro intestinal tract infections but it also causes stomach cancer [19].

Further, the preparation of fermented foods is usually done within the household. Hence, the lower standards of hygiene might also lead to increased growth of pathogenic bacteria and thus increased GIT infections. This problem could be decreased by village-level education programs. The milk-derived fermented foods possibly result in the symptoms of lactose intolerance, reported to be common in native populations around the world, including Asia [20]. Milk is the main source of lactose in the diet; infants and young children digest lactose with lactase. In most mammals, the level of lactase is severely reduced after weaning, so that the majority of adults lose this ability and are lactose mal-absorbers. Those mal-absorbers who display clinical symptoms after milk consumption are described as lactose-intolerant [21,22]. These individuals develop diarrhoea, flatulence and abdominal pain after ingestion of lactose, since lactose is not efficiently hydrolysed in the small intestine but is fermented by bacteria in the distal ileum and colon. The people suffering from gastrointestinal tract showed similar kinds of symptoms, they had problems of indigestion, abdominal pain and vomiting in rare cases and even diarrhoea and flatulence.

Alcohol consumption is the world’s third risk factor for diseases; in middle income countries, it is the greatest risk factor [23]. In our study, we found that 62% of respondents who consume alcohol regularly get GIT infections. Alcohol can interfere with the activity of many enzymes that are essential for intestinal functioning. One of these enzymes is lactase, which breaks down the milk sugar lactose; lactase deficiency results in lactose intolerance. It also interferes with some of the enzymes involved in transporting nutrients from the intestine into the bloodstream and inhibits important enzymes that participate in the metabolism of drugs and other foreign organic substances in the gut [24].

Alcohol-induced digestive disorders and mucosal damage in the GI tract can cause loss of appetite and a multitude of abdominal complaints, such as nausea, vomiting, feelings of fullness, flatulence, and abdominal pain. These abdominal complaints can lead to reduced food intake, thereby causing the weight loss and malnutrition commonly observed in alcoholics. Chronic alcohol abuse also affects gastric function. Thus, alcoholics have a significantly higher incidence of shrinkage (i.e. atrophy) of the gastric mucosa and decreased gastric secretory capacity than do healthy control subjects of comparable age and sex [25]. The resulting decrease in acid production reduces the stomach’s ability to destroy the bacteria that enter with food and thus favors the colonization of the upper small intestine with potentially harmful microorganisms. Alcoholic inhibits absorption of a variety of nutrients. The importance of these absorption disorders in the development of nutritional disturbances in alcoholics, however, is unclear.

Although the population of Sikkim is exposed to various risk factors like any other population of India, given its ethnicity and tribal roots, it varies from others for in terms of their unique food and lifestyle habits. This was the rationale behind the study to bring these unique features to the fore. Although the nature of the study may appear preliminary, it has attempted to collect the base line data regarding GIT infections for the first time, which in future may prove very essential for detailed studies with help of pathological and clinical samples for the same topic.