Copyright: © 2013 Weigler G, et al. This is an open-access article distributed under the terms of the Creative Commons Attribution License, which permits unrestricted use, distribution, and reproduction in any medium, provided the original author and source are credited.

Objective: To examine the prevalence of unrecognized sexually transmitted diseases in women who present to the emergency room with urinary complaints, which generally would be treated only for urinary tract infection. Methods: An eight month, prospective study was performed in a community, teaching hospital emergency department. Sexually active women, ages 18-45, who presented with urinary complaints were solicited for participation. Physician-administered questionnaires queried the demographic, gynecologic, obstetric, sexual history, and presenting symptoms. Patient complaints, physical findings, laboratory results (urinalysis, urine culture, serum Venereal Disease Research Laboratory (VDRL), and cervical cultures for Nisseria gonorrhea, Chlamydia trachomatis, and Trichomonas) were reviewed. Results: A total of 49 patients (66% African American, 28% Caucasian, and 6% other) who met the inclusion criteria were enrolled. The mean age of our participants was 25 years. The range of sexual partners in one’s lifetime was 1 to 50, with a mean of 12.8 partners. Forty-eight percent had a history of a Sexually Transmitted Disease (STD) and 18% had active disease (C. trachomatis 8%, syphilis 2%, and Trichomonas 8%). There was no relationship between the history of a STD and positive cultures or recurrent STD. Thirty-four percent were confirmed to have a UTI. Fourteen percent were co-infected with both a STD and a UTI. Conclusion: The prevalence of occult STDs in women presenting with urinary complaints who underwent pelvic examination was 18%. The evidence emphasizes the importance of diagnosing STDs with performing a pelvic examination and culture on sexually active females with nonspecific urinary complaints, who otherwise might be misdiagnosed as having a simple urinary tract infection.

Urinary Tract Infections (UTIs) account for over 1 million visits to the emergency department every year [1]. While most adults with UTI symptoms can be presumptively treated for simple UTI based on symptoms alone, some retrospective studies have shown that lower urinary tract complaints suggestive of UTI may be the only symptoms present in otherwise asymptomatic Sexually Transmitted Diseases (STDs) in the sexually active female [2,3]. There is danger of misdiagnosis these patients with a simple urinary tract infection, and not treating primary or co-existent STD.

Previously, we performed a preliminary retrospective chart review [3] examining the prevalence of STDs in women who presented to the ED with complaints suggestive of urinary tract infections over a 6 month span. Cervical cultures were taken for N. gonorrhea, C. trachomatis, and Trichomonas. Thirty-nine percent of these patients were found to have a STD (N. gonorrhea 4.5%, C. trachomatis 29.9%, and Trichomonas 4.5%). Six percent of patients had multiple STD infections.

The goal of this prospective study is to validate the findings of our previous retrospective review that STDs have a significant prevalence in the etiology of lower urinary tract symptoms in the sexually active female who presents to the emergency department with said complaints. We hypothesize that women presenting with UTI symptoms will have a high percentage of primary or co-existent STD.

Using Berg et al. [2] and our own previous retrospective study [3] as models, a prospective study was designed in a community teaching hospital Emergency Department (ED) in conjunction with the department of urology. Garden City Hospital Emergency Department, with >45,000 patient visits per year, is located in a suburb of Detroit, Michigan. The hospital’s Internal Review Board granted approval for the study. All participants signed consents and were provided an opportunity to ask any questions regarding the study prior to signing the informed consent.

Forty-nine patients were enrolled in the study over an eight month period. The participants consisted of 66% African American, 28% Caucasian, and 6% other. The mean age was 25.2 years. The range of sexual partners per patient was 1 to 50, with a mean of 12.8 partners. Six participants refused to give information regarding number of partners. There existed a wide range of presenting symptoms, with suprapubic tenderness being the most common (Table 1).

Table 1: Symptoms at presentation of 49 prospectively studied females with a clinical picture consistent with UTI.

Forty-eight percent gave a history of a prior STD infection(s), but only 18% were found to be currently infected at the time of investigation (C. trachomatis 8%, syphilis 2%, Trichomonas 8%). There was no relationship between a previous history of a STD and positive cultures or recurrent STD (p<0.05). Thirty-four percent of patients had a suspected UTI on urinalysis that was later confirmed by culture. The urine cultures were positive for E. coli in all cases. Fourteen percent of patients diagnosed with a STD were also diagnosed with a UTI (Figure 1). The remaining 60% of patients had UTI as the sole identifiable cause of their presenting complaints. 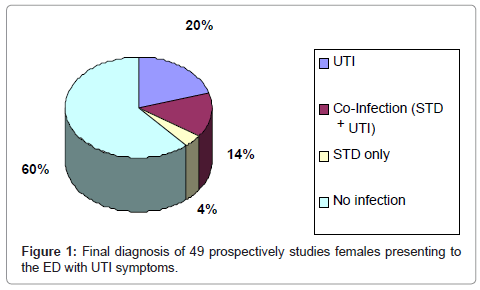 STDs can have severe consequences to the patient when undiagnosed [4]. Our data show that 18% of sexually active women presenting to the ED with urinary tract infection complaints were found to have an STD. This adds support to the notion that STDs can be difficult to diagnose [2,5] and emphasizes the likelihood of misdiagnosis of STD because symptoms are often absent or easily misidentified as a simple urinary tract infection.

Comparisons between this prospective study (n=49), our previous retrospective study (n=60), and that of Berg et al. [2] (n=94) is seen in Figure 2. Berg et al. [2] examined females presenting to the ED with lower urinary complaints at a nearby but more urban locale hospital. They found that 53% had STD as the cause. All the studies showed high levels of STDs in general, with differing ratios of gonorrhea, Chlamydia and Trichomonas (the Berg study did not examine for syphilis) (Figure 2). Our county (Wayne County, Michigan) was reported by the US Center for Disease Control (CDC) to have the highest number of reported cases of primary and secondary syphilis in 2001 (Figure 3) [6], which was seen as a 2% rate of syphilis is our study. There were minor differences in the patters of STD presentation. None of our patients in this prospective study had N. gonorrhea infections, or more than one simultaneous STD infections [2,3]. These differences are probably less important than our main conclusion that a wide variety of different STDs can be present in patients with UTI symptoms. 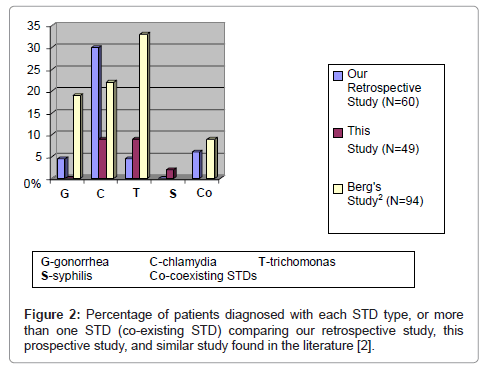 Figure 2: Percentage of patients diagnosed with each STD type, or more than one STD (co-existing STD) comparing our retrospective study, this prospective study, and similar study found in the literature [2]. 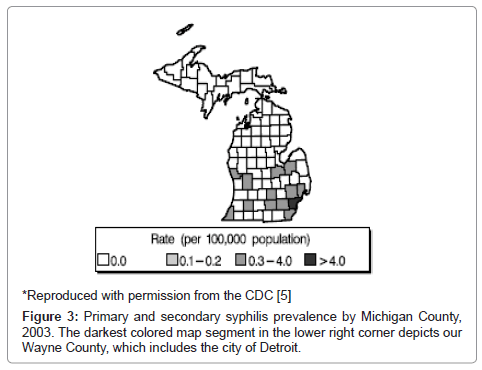 Figure 3: Primary and secondary syphilis prevalence by Michigan County, 2003. The darkest colored map segment in the lower right corner depicts our Wayne County, which includes the city of Detroit.

STDs continue to pose serious long term health consequences including pelvic inflammatory disease, infertility, ectopic pregnancy, salpingitis, and perinatal infections [4]. Adolescents are especially at risk. The Youth Risk Behavior Surveillance Survey in 1997 showed that nearly 50% of high school students questioned admitted to being sexually active. Fifty-seven percent of the sexually active teens reported that neither they, nor their partner, used a condom the last time they engaged in sexual intercourse [7]. Combined with the risky behavior of multiple partners, STDs occur in epidemic proportions [8]. UTIs have been shown to be a marker of sexual activity in the teenage population [9], and these data show that UTI symptoms or culture-proven diagnosis should also be a trigger for STD screening in adult or teenage populations.

These facts make it incumbent on the ED physician, the family physician, the gynecologist/obstetrician, and the urologist to recognize that the diagnosis of STDs is not always straightforward and that it may actually be manifesting as urinary symptoms. A thorough history should include questions regarding current symptoms, sexual history, obstetric and gynecologic history, number of partners, use of contraceptives, previous STDs, and UTIs. The physical exam should focus on the patient’s vital signs, abdomen, flanks, and genitalia. While the abdomen and flanks should be palpated for tenderness, the genitals should be inspected for any lesions and discharge. Cervical swabs should culture for Trichomonas and consist of DNA probes for N. gonorrhea and C. trachomatis. In addition to other lab work that may be performed, Venereal Disease Research Laboratory (VDRL) tests should be included to screen for syphilis.

This study contains certain limitations. First, the study was designed to look for STDs in women specifically presenting with UTI symptoms. We do not know the baseline prevalence of STDs in all sexually active women presenting to our ED. Theoretically, it is possible for the rate to be the same as in our study. Berg et al. also made this observation in his study [2]. Second, findings are limited to this single institution, although our findings are similar to those reported by other centers.

UTIs account for one of the most common presenting etiologies to the ED. Eighteen percent of sexually active women presenting to the ED with UTI symptoms were found to have STDs that may have otherwise gone undiagnosed. This highlights the importance of performing a thorough history, physical, and obtaining laboratory data, including cervical cultures and VDRL, in order to recognize this often times difficult to diagnose entity. Failure to recognize and treat STD infections can have potentially detrimental consequences, especially in the adolescent and younger adult patient.