Copyright: © 2014 Abdul M, et al. This is an open-access article distributed under the terms of the Creative Commons Attribution License, which permits unrestricted use, distribution, and reproduction in any medium, provided the original author and source are credited.

Background: Diet has a local effect on the oral health, primarily on the integrity of the teeth, pH, and composition of the saliva and plaque. Dental research studies on food type, texture, composition, retentiveness, consistency, etc. and their effect on dental hard tissues have been growing since ancient times. Simple sugars are considered cariogenic as against complex sugars/starch. Streptococcus Mutants initiate the caries process by acid production and thus lowering the plaque pH. Most of the commercialized brands claim that cereal and milk breakfast provides not only proteins, but also the other essential nutrients. Presweetened and unsweetened cereals contain various amounts of sugars which can be cariogenic but when consumed with milk their cariogenic potential drops down as a result of less oral retention time.

Objective: The objective of this study is to investigate the effect of commonly consumed breakfast cereals on plaque acidogenicity available in Indian market.

Materials and methods: 25 volunteers who reported to the department of M.A. Rangoonwala Dental College, Pune were included in the study. Five commercially available cereal types in the Indian market were divided into two subgroups flavored and unflavored. Plain cereals with nuts came under the unflavored group. Cereal with fruits, chocolates and honey were used under flavored group. Subjects were made to consume 30gms of cereal with 60 m L of plain milk Cereals were compared by evaluating the pH of plaque at different time intervals taken at baseline and at 5, 10, 15, 20 and 30 minutes using pH meter.

In the fourth century B.C., Aristotle expressed the view that dental caries was caused by consumption of sweet figs that stuck to the teeth. More than 23 centuries have elapsed, and yet we still lack the definitive information concerning the relative cariogenicity of specific food composing the human diet. Diet refers to the customary allowance of food and drink taken by any person from day to day. Nutrition concerns the assimilation of foods and their effect on metabolic processes of the body. According to the American Dietetic Association [1] “nutrition is an integral component of oral health.” Oral health and nutrition have a synergistic relation. The relation between diet and nutrition and oral healthand disease can best be described as a synergistic two-way street. Diet has a local effect on oral health, primarily on the integrity of the teeth, pH, and composition of the saliva and plaque. Nutrition, however, has a systemic effect on the integrity of the oral cavity, including teeth, periodontium (supporting structure of the teeth), oral mucosa, and alveolar bone [2]. Marthaler (1967) stated that foodstuffs containing simple sugars are far more cariogenic than common starchy foods. Newbrun (1969) called for the specific elimination of sucrose or sucrose containing foods rather than restricting total carbohydrate consumption. Cariogenicity of staple starchy foods is low; the addition of sucrose to cooked starch is comparable to similar quantities of sucrose; fresh fruits appear to have low cariogenicity (Rugg-Gunn, 1986). Sheiham (2001) concluded that sugars, particularly sucrose, are the most important dietary cause of caries; the intake of extrinsic sugars greater than four times a day increases caries risk; sugar consumption should not exceed 60 g/day for teenagers and adults and proportionally less for younger children [3]. Prepackaged snack foods have high levels of added sucrose to: improve their taste; add bulk; and reduce the overall production cost. This practice, however, reduces nutritional benefits and increases caries susceptibility. Most of the commercialized brands claims that cereal and milk breakfast provides not only proteins, but also four nutrients most kids don’t get enough of fiber, calcium, vitamin D and potassium. A previous study has reported the acidogenicity and demineralization potential of a group of cerealbased foods and a group of fruits [4]. The cereals in this study were chosen because they are commonly consumed for breakfast. Therefore, it was appropriate to investigate pH drop seen after consumption and relative cariogenicity.

25 volunteers who reported to the department of MARDC, Pune were included in the study. Five commercially available cereal types in the Indian market were divided into two subgroups flavored and unflavored.

Plain cereals with nuts came under the unflavored group.

Cereal with fruits, chocolates and honey were used under flavored group.

Subjects were made to consume 30 gms of cereal with 60 mL of plain milk.

Plaque pH was measured using the technique of Fosdick et al. [5], later modified by Frostell [6] and Rugg-Gunn et al. [7]. Subjects participating in the study were asked to refrain from tooth brushing at least for 48 hours and from eating or drinking (apart from water) at least 2.5 hours prior to each visit [8].

On each of the test days, pooled plaque samples of approximately l mg were removed from six buccal surfaces, of posterior teeth representing all the quadrants of the mouth, using a sterile blunt explorer [8]. Each plaque sample was thoroughly mixed with 20 ml of distilled water, measured by a pipette into a disposable tray and carried with another pipette into the pH system for recording (HANNA HI 99104 Digital pH Meter/Tester/Ch ecker, HI9910).

The reading was recorded and thereafter, the electrode was cleaned with a stream of distilled water and dried. The electrode was calibrated before starting the tests and in between measurements by using two buffering solutions of pH 4.0 and 7.0 [8]. The plaque samples were taken before the test products were consumed and baseline plaque pH was recorded using portable standard digital pH meter with glass microelectrode. The subjects were then instructed to eat the cereals. Plaque samples were taken at baseline and at 5, 10, 15, 20, and 30 minutes thereafter for the measurement of the plaque pH

Table 2a: Intra and Inter brand comparison of pH in unflavoured group.

Table 2b: Intra and Inter brand comparison of pH in flavoured group. 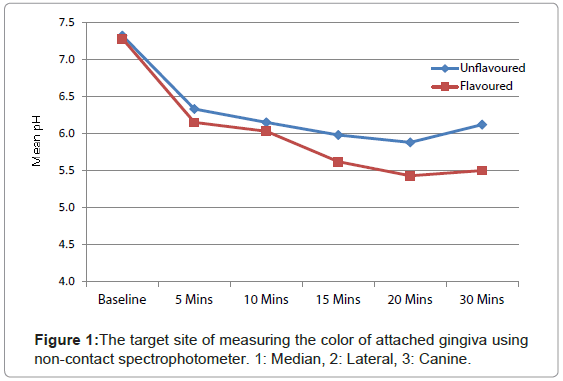 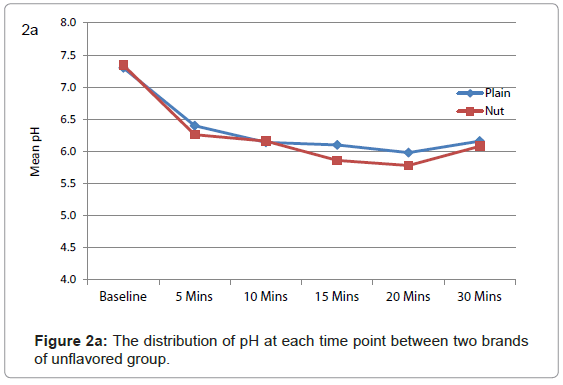 Figure 2a: The distribution of pH at each time point between two brands of unflavored group. 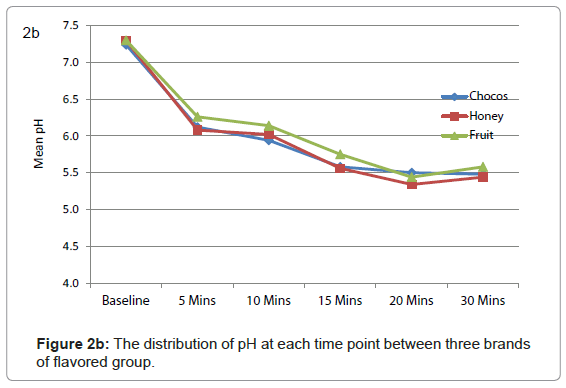 Figure 2b: The distribution of pH at each time point between three brands of flavored group.

Diet exerts a profound effect on dental caries locally in the mouth by reacting with enamel surface and by serving as a substrate for cariogenic microorganisms which produce acid thereby reducing the pH and causing dissolution of the tooth surface. Breakfast cereal (or just cereal) is a food made from processed grains that is often eaten with the first meal of the day. It is often eaten cold, usually mixed with milk (e.g. cow’s milk, soymilk, rice milk, almond milk), juice, water, or yogurt, and sometimes fruit, but may be eaten dry. Some companies promote their products for the health benefits from eating oat-based and high-fiber cereals. Cereals may be fortified with vitamins. Some cereals are made with high sugar content. Many breakfast cereals are produced via extrusion. Food products manufactured using extrusion usually has high starch content .The effect of starch on dental plaque pH has been the focus of intense debate over the years. In cases where it is the sole source of dietary carbohydrates, starch is considered less acidogenic than sucrose [9]. Gelatinized or processed starches, however, can be rapidly hydrolyzed in the oral cavity into maltose, maltotriose, and low-molecular weight dextrin’s. In turn, plaque bacteria can ferment these substrates immediately, thus drastically reducing the plaque pH within a short period [10]. Ribeiro et al. have reported that starch combined with sucrose, as in many processed foods today, can be highly acidogenic.

Cariogenicity of diet depends on: 1) nature of the diet 2) retention and oral clearance time of dietary components 3) intake frequency 4) chemical composition 5) protective components in the diet.

The measurement of plaque acidogenicity is frequently employed for evaluating the cariogenic potential of foods and beverages [11,12]. The methods used for this purpose have been refined since the introduction of the antimony touch electrode by Stephan [13]. At present, the 3 methods of choice are: (1) plaque sampling; (2) the touch electrode; and (3) indwelling electrode telemetry [14].

Critical pH as defined as the pH level above which calcium salts would not be dissolved from teeth under mouth conditions and below which decalcification would take place. (Robert M. Stephen, 1944). 5.0- 5.5 RM Stephan, 1944, Whereas MCINTYRE, 1998 suggested range for critical pH as 5.2-5.5 and Fejerskov et al, 1996 (FOR ROOT CARIES) gave range of 6.2-6.7. The average plaque pH in subjects following consumption of cereals remained below pH 6 from 5 minutes up to 30 minutes. In unflavored group cereals with nuts had maximum pH drop and this can be attributed to the raisins present in them. The sweet granules on the surfaces of raisins may be a readily fermentable sugar source for acid production by plaque bacteria. This might have contributed to the rapid drop in plaque pH. In flavored group pH drop was seen maximum with cereals containing honey. This could be due to its high adhesiveness which refers to firm attachment between the food and the tooth surface. However intraoral retention of food depends not only on the adhesion but also on cohesion, the tendency of food to stick to itself. Another property of food, its tackiness has been invoked. Adhesion is considered as occurring when there is pressure applied to the food, it relates primarily to interproximal and occlusal sites where the food is under masticatory force. Tackiness is the ability of a food to stick to the tooth surface when only minimal force is involved in making the contact between the food and the tooth. Drop seen with cereals containing fruits could be due to the longer retention ability of the fillings and also could be attributed to the sucrose concentration of the fruits which additively makes it more acidogenic. The cereals containing chocolates also showed a steady fall in the levels of pH but comparatively less cariogenicwhen compared to the other flavored cereals. The lesser cariogenicity of chocolates may be because of the fact that chocolate boost the antioxidant levels and also have higher concentrations of unsaturated fatty acids like oleic acid, fatty acid, palmitic acid and stearic acid [15,16].

The American Dental Hygienists’ Association list characteristics of cariogenic foods as those that have a highly fermentable carbohydrate content and a sticky consistency break into small pieces in the mouth reduce the pH in the mouth to less than 5.5. Although the term “healthy eating” is familiar to the children, it is neither well understood nor applied in practice. Limited research activities impacting diet and nutrition highlights the need for continuous research to build a robust evidence base that supports the paradigm shift in unhealthy to healthy eating habits in children.