Copyright: © 2014 Ralston D, et al. This is an open-access article distributed under the terms of the Creative Commons Attribution License, which permits unrestricted use, distribution, and reproduction in any medium, provided the original author and source are credited.

Objective: To compare the efficacy of a dental gel containing 2.6% Edathamil in controlling dental plaque to that of a commercially available dentifrice containing 0.3% triclosan, 2.0% PVM/MA copolymer, and 0.243% sodium fluoride.

Results: Eight (8) subjects complied with the protocol and completed the study. Compared to the 0.3% triclosan/2.0% PVM/MA copolymer/0.243% sodium fluoride dentifrice group, the 2.6% Edathamil dental gel exhibited statistically significant reductions in all measured parameters, respectively, after four weeks of product use.

Conclusion: The overall results of this double-blind clinical study supports the conclusion that a dental gel containing 2.6% Edathamil is efficacious for the control of dental plaque, and that it provides a greater level of efficacy for the control of dental plaque biofilm than does a dentifrice containing 0.3% triclosan/2.0% PVM/MA copolymer/0.243% sodium fluoride.

Fluoride dentifrices have played a significant role in reducing dental caries, and many dentifrices on the market today deliver other oral health benefits, such as improvement in periodontal health [1-5]. It is widely accepted that the control of dental plaque biofilm and gingival inflammation is the key to maintaining periodontal health. Controlling dental plaque biofilm starts with the mechanical removal by tooth brushing [6]. The American Dental Association defines the maintenance of good oral hygiene as tooth brushing for two minutes twice daily plus flossingonce a day [7]. It has been shown that selfperformed tooth brushing and flossing is not always sufficient in itself to maintain a healthy mouth [8] so, manufacturers started looking at different chemotherapeutic agents to incorporate into dentifrice formulations that would provide antiplaque and/or anti gingivitis efficacy.

One such agent is triclosan, a phenolic antibacterial agent with low toxicity and a broad spectrum of activity. It has been shown to be effective against both gram positive and gram negative bacteria [9]. Triclosan has been incorporated into a sodium fluoride dentifrice in combination with a polyvinylmethyl ether/maleic acid copolymer (PVM/MA copolymer) to ensure delivery and retention of the triclosan on oral hard and soft tissues. This dentifrice formulation (Colgate® Total® Toothpaste, Colgate-Palmolive Co., New York, NY, USA) has been clinically proven in numerous scientific publications to prevent and reduce plaque biofilm and reduce gingivitis in the adult population [10,11]. It has also been shown in long-term clinical studies to provide anticaries benefits, and has been clinically proven to prevent the progression of periodontitis [12]. Colgate Total Toothpaste is a dentifrice approved by the US Food and Drug Administration to be used for the prevention of plaque biofilm accumulation and gingivitis. It is also accepted by the American Dental Association for the prevention of plaque biofilm accumulation and gingivitis.

This approach to oral plaquebiofilm control still relies heavily on detergents, abrasives and antimicrobials. If we look at how plaque adheres to teeth, the process is intricately tied to the presence of calcium in the immediate surroundings of the plaque forming bacteria [13-16]. Bennin et. al. [17] showed that chelation of calcium caused the dispersion of Pseudomonas Aeruginosa biofilms. P. Aeruginosa is one of the bacteria species along with P. Gingivalis and T. Forsythia that have been associated with periodontal disease. Livionex uses the same metal chelator, edathamil, as used by Bennin et al [17] to remove the calcium from the plaque in order to disperse dental plaque, and prevent the bacteria from adhering to the teeth. Many dentifrices contain chelators (e.g. sodium hexametaphosphate and others) in high concentrations and amounts (far higher than in the Livionex Dental Gel) while showing little or no efficacy against plaque. According to Livionex, because edathamil is a negatively charged molecule and is repelled by the negatively charged plaque surface, it is therefore ineffective for plaque reduction as currently used. Livionex uses a proprietary method to activate the edathamil molecule and allow it to penetrate into the plaque rapidly, to remove the calcium in the plaque fluid, thereby breaking up the plaque.

The objective of this four-week clinical study was to compare the anti-plaque efficacy of two commercially available products: a dentifrice containing 0.3% triclosan, 2.0% PVM/MA copolymer, and 0.243% sodium fluoride (Colgate Total) to a dental gel containing 2.6% Edathamil (Livionex Dental Gel). Gingivitis and plaque evaluations were conducted at baseline and after two and four weeks of product use.

Ten subjects with early periodontitiswere studied. Subjects were enrolled in this randomized, controlled, double-blinded study and chosen by the presence of pocket depths greater than 4 mm in the presence of BOP, and a GI of greater than 1. Scaling and root planing was performed on each of the subjects 6 to 12 months prior to their enrollment. After signing an informed consent, the subjects were randomly assigned to brush for 28 days with either the test or control gel. Test gel was the Livionex Dental Gel, and the control gel was Colgate Total gel. The two gels were packaged in plain white sealed tubes, and marked with a four digit random number. The randomization key was kept with a third party. Both the investigator and the subject were unaware of which gel was allocated to them.

The subjects, all of whom had been trained in the proper method of brushing their teeth, were asked to maintain their normal dental hygiene habits, but change their regular toothpaste with the assigned dental gel, and to brush twice daily. After the measurement of baseline data, all subjects were provided with a professional dental cleaning. Plaque levels (Quigley-Hein, Turesky Modification Plaque Index) (PI), gingival inflammation (Löe-Silness Gingival Index) (GI), Bleeding on Probing (BOP Index) and Pocket Depths were determined at baseline before the cleaning. Volunteers were evaluated at Baseline, Day 14 and Day 28 by the same blinded and experienced investigator.

1=Separate flecks of plaque at the cervical margin.

2=A thin, continuous band of plaque (up to 1 mm) at the cervical margin.

3=A band of plaque wider than 1 mm, but covering less than 1/3 of the side of the crown of the tooth.

5=Plaque covering 2/3 or more of the side of the crown of the tooth.

Subject-wise scores were determined by averaging the values obtained overall scoreable surfaces in the mouth.

Gingivitis was scored according to the Löe-Silness Gingival Index. Each tooth was divided into two surfaces, facial and lingual. Those teeth with cervical restorations or prosthetic crowns were excluded from the scoring procedure. The gingiva adjacent to each tooth surface was scored as follows:

Subject-wise scores were determined by averaging the values obtained over all scoreable surfaces in the mouth.

Gingivitis was evaluated at the same location points that were utilized for the assessment of plaque. In the clinical examination, the degree of gingival inflammation was always determined prior to the plaque assessment.

Gingival bleedingon Probing was scored using a modified Sulcus Bleeding Index. A score of 0 to 3 is assigned to each facial and lingual nonrestored surface of all the teeth according to the following criteria:

2=Blood forms a confluent red line on the gingival margin

2. One Reading per Site

Probing depths are recorded to the nearest full millimeter. Round measurements to the next higher whole number; for example, a reading of 3.5 mm is recorded as 4 mm, and a 5.5 mm reading is recorded as 6 mm. 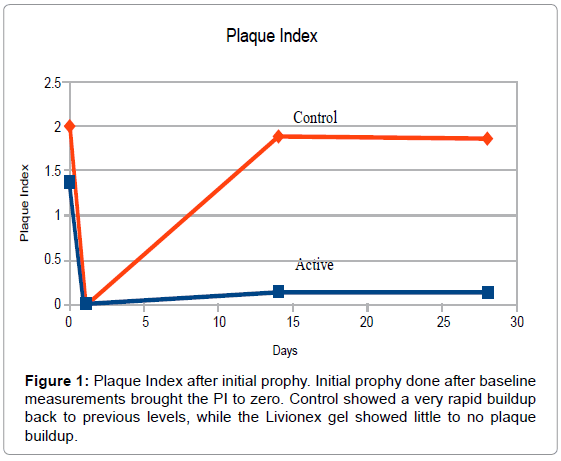 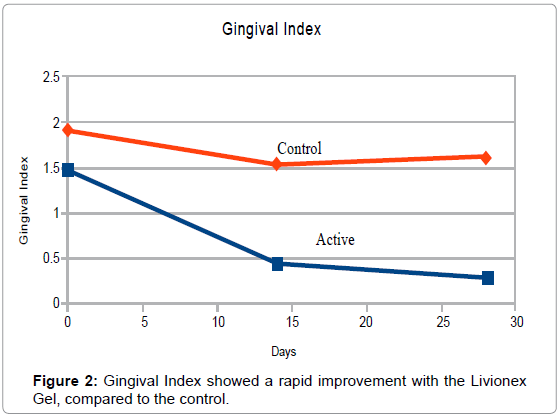 Figure 2: Gingival Index showed a rapid improvement with the Livionex Gel, compared to the control. 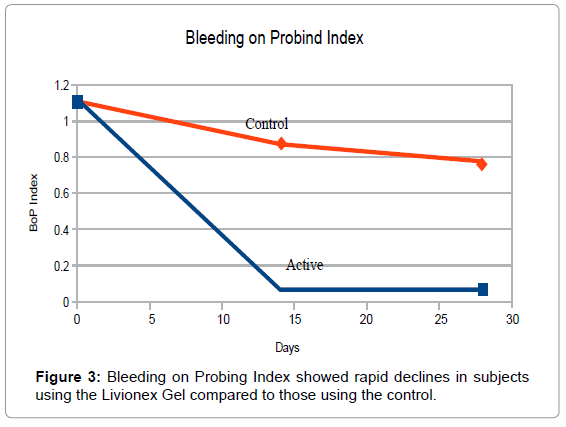 Figure 3: Bleeding on Probing Index showed rapid declines in subjects using the Livionex Gel compared to those using the control.

A comparison of the percentage change from baseline in each of the measurements was performed. A statistical analysis was done to see whether the differences between the Livionex Gel and the control were statisticallysignificant. A T-test was performed that accounted for the uneven size of the two arms. The Null Hypothesis was that there was now difference between the two treatments. The null hypothesis was rejected at the 0.05 level. The results can be seen in Table 1. A retrospective calculation of the power of the tests showed them to be over 95% at an alpha 0f 0.05

A comparison of each measurement site was also performed to see whether or not there was an improvement. This procedure is somewhat similar to that adopted by Lindhe [18]. The results of that comparison are in Table 2. Again, a T test was performed. The Null Hypothesis was that there was now difference between the two treatments. The null hypothesis was rejected at the 0.05 level. A retrospective calculation of the power of the tests showed them to be over 95% at an alpha 0f 0.05.

This small study documents that Livionex Dental Gel, with activated edathamil, is significantly better than a triclosan based toothpaste at removing plaque, improving the gingival index and improving pocket depths. These results merit further study in a larger population.