Delaying Radiotherapy and Risk of Recurrences in Patients with Breast Cancer Stage I And II. A Retrospective Observational Study

Copyright: © 2016 Raquel CC, et al. This is an open-access article distributed under the terms of the Creative Commons Attribution License, which permits unrestricted use, distribution, and reproduction in any medium, provided the original author and source are credited.

Methods: We conducted a retrospective observational study including women with a primary diagnosis of breast cancer stage I or II, between January 2003 and December 2008. All patients received surgery, RT and adjuvant chemotherapy, and were followed for a 5 years after diagnosis. Data was obtained from the medical records. The incidence of recurrence and mortality was assessed by logistic regression adjusting for variables that might affect the prognosis of the disease (age, hormone receptors, lymph node involvement, type of chemotherapy, hormone therapy, etc.), and was expressed with the Odds Ratio (OR).

Conclusions: In view of the results obtained, delaying the start of RT does not seem to increase the risk of recurrences or mortality.

Description of the Data Presented While. What it Adds?

Authors don`t agree on the effect that delay of radiotherapy beginning could have in the risk of recurrences and mortality. The results of the studies are inconclusive.

The studies published have very different cohorts of women, so it is very difficult to compare results between them.

It is necessary to establish the criteria for selecting women for performing studies on this topic, which must be respected in all cases.

Our study tries to bring some clarity.

Radiotherapy (RT) is used to complement conservative surgery in early stages of breast cancer and it has been demonstrated that this combination achieves the same results in terms of local control and survival as radical surgery [1]. Local tumor control depends on the eradication of tumor cells and [2]. In principle, a delay between surgery and starting RT could allow the growth of clonogenic cells in the tumor bed and the development of radio resistance [3]. However, there is no consensus about the implications of the delay of RT beginning in the incidence of recurrences and mortality of patients with cancer. Punglia et al. [4], found an increased likelihood of local recurrence (hazard ratio 1.19, 95% confidence interval 1.01 to 1.39, P=0.033) when radiotherapy started after six weeks from surgery [4]. Recently, Jobsen et al. [5] did not found differences in local control between tertiles (<45 days, 45-56 days and 57-112 days), but found them in metastasis-free survival and the disease-specific survival [5]. Caponio et al. [6], did not found any association between delay and risk of local recurrences or distant metastasis, and Vujovic et al. [7] also found no increase of recurrence risk in patients receiving RT after 16 weeks from breast-conserving surgery (time interval).

On the other hand, the optimum time interval between surgery and RT starting has been not established [5,6]. National Canadian Clinical Practice recommend that RT should be given before 12 weeks after BCS [8], Cancer National Intelligence Network suggests starting RT before 31 days [9], the Mersey and Cheshire cancer network recommend starting RT before 12 weeks [10] and Italian guidelines before 20 weeks [11]. Clearly, there is no consensus. Moreover, no phase II studies about the optimal interval are available [6].

It is necessary to go deeper into the topic, for bringing some clarity, so we carried out a retrospective study in women with stage I and II breast cancer, to assess if the delay of RT beginning could increase the risk of recurrences and mortality.

We conducted a retrospective observational study including 225 women with a primary diagnosis of breast cancer stage I or II (T1 N0 M0, T1 N1 M0, T2 N0 M0, and T2 N1 M0) according to the TNM system, 2003 [11], between January 2003 and December 2008, in the Araba University hospital. All patients received surgery, RT and adjuvant chemotherapy, and were followed for 5 years after diagnosis, because among the 80-90% of the loco-regional recurrences occur within 5 years after diagnosis [12].

We excluded from the analysis women who moved to another city or another hospital before or after diagnosis, those who had a personal history of any type of cancer or a secondary diagnosis of cancer within 6 months after surgery (Figure 1). 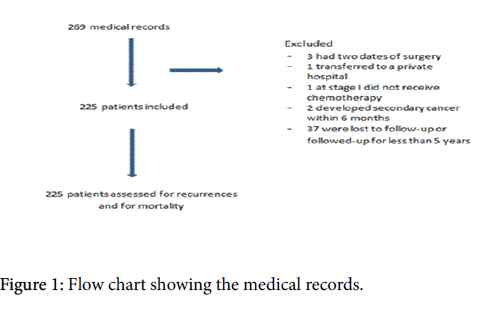 This study was approved by the ethics committee of clinical research of the Araba university hospital.

Data was obtained from the medical records. We collected data about local and distant recurrences, and mortality within 5 years after diagnosis and about the delay between chemotherapy and RT beginning (because all our patients received chemotherapy, and according to the protocol which was valid at that time, the RT started when chemotherapy had ended).

As Punglia et al. [4], found a lower risk of loco-regional recurrences in women who started radiotherapy within 6 weeks after surgery, we recoded our continuous variable “delay in radiotherapy beginning” in a variable with two categories ≤6 weeks and >6 weeks.

We also collected other variables that might have an impact on the prognosis of the disease: age at diagnosis [13,14], hormone receptors (yes/no) [15,16], chemotherapy with antracyclines (yes/no) [17], tumor stage [17], type of surgery. The time in days between the diagnosis and surgery, and days between surgery and chemotherapy was also recorded.

The incidence of recurrence and mortality was assessed by logistic regression adjusting for variables that might affect the prognosis of the disease (age, hormone receptors, lymph node involvement, type of chemotherapy, hormone therapy, etc.), and was expressed with the Odds Ratio (OR).

For selecting the potential confounding variables to include in the model, we have carried out a bivariate analysis between the main variable (recurrences and mortality) and each of the prognostic variables, selecting only those with a value of statistical significance of p<0.05.

We have performed the statistical analysis by entire sample and by subgroups of lymph node involvement (yes/no).

Table 1: General characteristics of the sample broken down by lymph affectation.

Table 5: Association between delay of RT beginning and relapse. Patients with NO lymph node involvement.

Table 7: Association between delay of RT beginning and mortality by tumor. Entire sample.

Although it is clear that RT is complementary to breast-conserving surgery in early stages, there is no consensus about the implications of delaying the onset. The knowledge of the impact that might have the delay of the RT begining, could help us to manage waiting lists; lists enormously saturated due to the increasing incidence of cancer, attributable to the growth in the elderly population, and to the discovery and adoption of new indications for RT [13,18-20]. So, trying to bring some light to clarify this issue, we reviewed the clinical history of 225 patients diagnosed with breast cancer stage I-II for 5 years after the diagnosis of cancer, to detect recurrences and mortality.

We have not found association between the risk of relapse and mortality and delay of RT starting (p>0.05) in any of the analyses. Only mastectomy seems to increase the risk of recurrence. This could be explained due to all women undergo mastectomy had a more advance stage (II) and those with recurrence had lymph node affected too. These results contrast with the findings of Punglia et al. [4], and Jobsen et al. [5], but are consistent with those of Vujovic et al. [7] and Coponio et al. [6].

Among the factors that may explain the significant differences found by Punglia’ s group [4], it is worth mentioning that their patients were older than ours (above 65 years of age) and, in particular, they did not receive chemotherapy, this is associated with an increased likelihood of recurrence [15]. Furthermore, there were no collected data about the presence or absence of hormone receptors in more than 25% of patients. This is an important issue to have into account because, the determination of oestrogen, progesterone and HER2 receptors, has allowed the choice of more appropriate therapies for each type of breast cancer, and this is reflected in a better response to treatment, prognosis and improvement of patients [21]. There are several compounds that act as growth factor or mitogens in cancer cells, as cytokines, hormones, proteins, and neurotransmitters through their anchorage, with specific receptors in white cells.

It has been seen that the presence of different receptors in neoplastic cells allows many substances act as mitogens, by activating genes which promote carcinogenesis; promoting the malignant transformation of the cells, their development and progression [22,23]. These are epigenetics mechanisms that control the expression of genes without affecting the composition of the genes themselves. Regulation of gene transcription has emerged as a key biological determinant of protein production and cell differentiation, and plays an important pathogenic role in a number of human diseases, as cancer.

In our study, 187 out of the 225 women (83%) received hormone therapy. Further, all the women with stage I/II received chemotherapy, of whom 79.4% (n=177) were treated with anthracyclines, drugs that have been associated with a significant reduction in the annual risk of recurrence or death [24].

All these factors may have contributed to the lower incidence of recurrence in our patients, 12 out 225 (5.3%), a figure that is lower than those reported by other authors [24-28].

Among the factors that may explain the difference with the results of Jobsen et al. [5] study is that a lot of women didn’t received adjuvant systemic therapy. All our patients received chemotherapy, and hormone therapy when hormone receptors were present. This can be explained by the moment (year) when the diagnosis was made. The guideline for administering adjuvant systemic therapy in breast cancer has changed [5]. In the early years, the number of tumour-positive axillary lymph nodes was the only indication. Later on not only positive lymph nodes but also large tumour size, high malignancy grade, and young age were of importance. Also the type of chemotherapy and hormone therapy, alone or in combination changed [5].

Although our results are similar to those of Vujovic et al. [7], and Caponi et al. [6], we found also differences between their and our group of patients. Among patients of Vujovic’s group, none had lymph nodes affected, and they didn’t received chemotherapy or hormone therapy. Women of Caponio’s group didn’t have lymph node affected, didn’t received chemotherapy, but they received hormonotherapy when it was indicated.

The main limitation is that article is a retrospective study of 225 patients with breast cancer stage I-II. It is possible that the selection of patients for RT was influenced by their risk factors for recurrence (that is, patients with a higher risk of recurrence due to a more advanced stage at diagnosis moment) making this a potential source of bias in the analysis of association between delaying the initiation of RT and recurrence. However with this type of design, we can’t know it.

In view of the results obtained, delaying the start of RT does not seem to increase the risk of recurrences or mortality. However, the differences in the treatment received by women included in these published manuscripts might contribute to not reach consensus on the importance of delaying the start of radiotherapy. It is necessary to establish the appropriate criteria for assessing this topic, that is, all group of researchers who delve into this topic should study the women with similar characteristics, and to conduct systematic reviews of retrospective studies, in order to increase the power of study by increasing the sample size.

This research received no specific grant from any funding agency, commercial or not-for-profit sector.

The authors assert that all procedures contributing to this work comply with the ethical standards of the relevant national guidelines on human experimentation and with the Helsinki Declaration of 1975, as revised in 2008, and has been approved by the institutional committees (Clinical Research Ethics Committee of Araba University Hospital).