5#Contributed equally to this study

Copyright: © 2016 Chen C, et al. This is an open-access article distributed under the terms of the Creative Commons Attribution License, which permits unrestricted use, distribution, and reproduction in any medium, provided the original author and source are credited.

Interleukin (IL)-17 is a newly described T cell-derived inflammatory cytokine. Recent studies have shown that inflammatory cytokines play important roles in the pathogenesis of type 2 diabetes mellitus (DM). However, whether IL-17 plays a prominent role in type 2 DM remains unclear. Here we measured serum concentrations of IL-17, and mRNA expression of IL-17 and its transcription factor RORγt in peripheral blood mononuclear cells (PBMC) from 30 patients with newly diagnosed type 2 DM and 20 healthy subjects. Results have shown that serum levels of IL-17 were significantly higher in patients than in healthy subjects (10.44 ± 6.47 vs. 2.99 ± 1.68 pg/mL, P<0.01); and mRNA levels of IL-17 and its transcript factor RORγt were also upregulated in PBMC from patients (P<0.001). Further, IL-17 mRNA expression was correlated with TNF-α mRNA expression in PBMC from patients (r=0.6988, P<0.001). These results indicated that IL-17 might contribute to the inflammation process in type 2 diabetes as an inflammation factor.

Inflammation is defined as the local physiological response to tissue injury and regulated by pro-inflammatory cytokines. Recently, chronic inflammation has received considerable attention as an important pathophysiological mechanism in type 2 diabetes mellitus (DM). Inflammatory cytokines have been postulated to be important pathogenic factors in the development of type 2 DM [1,2].

Increasing evidence suggests that IL-17 plays a crucial role in various inflammatory responses and autoimmune diseases [8-10]. Recent studies have shown that increased IL-17 levels were detected in STZ-induced diabetic animal models and non-obese diabetic (NOD) mice from insulitis to diabetes [11,12]. However, to date, there are little published data evaluating the role of IL-17 in type 2 DM.

Based on these observations, in this study, we investigated mRNA levels of IL-17 and its transcription factor RORγt in peripheral blood mononuclear cells (PBMC) and serum concentrations of IL-17 from patients with newly diagnosed type 2 DM. Meanwhile, we analyzed the correlation between IL-17 mRNA expression and mRNA expression of inflammation cytokines involved in type 2 DM in PBMC from diabetic patients. Our results suggest that IL-17 might be involved in the pathogenesis of type 2 DM as an inflammation cytokine.

Thirty patients with newly confirmed type 2 diabetes mellitus were collected from out-patient department or epidemiology investigation. The control subjects, who were healthy examinees from the hospital, comprised 20 healthy non-diabetic subjects of similar age. This study conformed to the approved institutional guidelines. Informed consent was obtained from all participants. These patients have been not received the treatment of antidiabetic drugs before diagnosis with diabetes. Microvascular and macrovascular diseases were assessed by clinical history and examination including fundoscopy through dilated pupils (retinopathy), proteinuria and creatinine (nephropathy), electrocardiogram and heart color ultrasound and peripheral vascular ultrasound (heart and peripheral vascular disease).

The diagnosis of type 2 diabetes was based on diagnostic criteria for diabetes of the World Health Organization (WHO) 1999. These are positive cases from any two of the following tests on different days: symptoms of diabetes mellitus plus casual plasma glucose concentration ≥ 11.1 mmol/L or fasting plasma glucose (FPG) ≥ 7.0 mmol/L or 2 h post-prandial plasma glucose (2h PPG) ≥ 11.1 mmol/L after a 75 g glucose load. All demographic and clinical data were extracted from patients’ files. Body mass index (BMI) was calculated as the ratio of the weight in kilograms to the square of the height in meters (kg/m2).

Serum IL-17 levels were assayed by ELISA Kit (Human IL- 17 immunoassay, eBioscience, San Diego, USA) according to the manufacturer’s instructions. The optical density was measured at 450 nm with an automatic ELISA reader. The minimum detection limit was 4 pg/ml for IL-17. To minimize the effect of inter-assay variation, samples from diabetes patients and controls were equally represented on each ELISA plate. All samples were analyzed in duplicates, and the mean of the duplicates was used for the statistical analysis. The intraassay and inter-assay coefficients of variation for IL-17 were 6.4 and 14.3%, respectively.

Total RNA was isolated from cell pellets using RNeasy Mini Kit (Qiagen, Hilden, Germany) according to the manufacturer’s instructions. Genomic DNA was removed from total RNA using the RNase-free DNase set (Qiagen, Hilden, Germany). The first strand cDNA was synthesized by using the cDNA synthesis kit (Promega, Madison, WI). All reactions were performed on ABI Prism 7500 Sequence Detection System (Applied Biosystems, Foster City, CA). The gene expression levels were analyzed by real time PCR using SYBR Green master mix (Applied Biosystems, Foster City, USA). The PCR conditions comprised an initial holding at 50°C for 2 min, and 95°C for 10 min followed by a two-step PCR program consisting of 95°C for 15 s, and 60°C for 60 s for 40 cycles. For each sample, mRNA expression level was normalized to the level of GAPDH gene. The sequences of primers were showed in the Table 1.

Data were expressed as mean ± standard deviation (SD) or median (interquintile range). Differences between groups were tested with the Student’s t-test or the Mann–Whitney U test for skewed data. Spearman’s correlation coefficient by rank test was calculated to assess the correlations between variables. The values of P < 0.05 were considered significant.

Table 1: The sequence of primers for real time PCR.

The clinical and demographic data of patients with type 2 DM in this study were shown in Table 2. Age and sex distributions were similar between patients and control subjects. Among the 30 recruited patients, 16 were men and 14 were women. The average age of the patients was 53.24 ± 7.54 years. Healthy controls were 20 subjects with mean age 49.48 ± 6.54 years, including male 12 and female 8 subjects. The diabetic patients were characterized by markedly higher levels of fasting blood glucose (FBG), glycosylated haemoglobin (HbAlc), C-peptide and C-reactive protein (CRP) compared to control subjects.

Serum levels of IL-17 in patients with type 2 diabetes

mRNA expression of IL-17and RORγt in PBMC from diabetic patients

PBMC is a major source of IL-17. To test whether serum IL-17 is secreted by PBMC, we further investigated mRNA levels of IL-17 and its upstream regulator RORγt in PBMC from patients with type 2 diabetes. As shown in Figure 2A, mRNA levels of IL-17 were dramatically higher in diabetic patients than in control subjects (P<0.001); and the expression of RORγt gene in diabetic patients were also markedly increased compared with control subjects (P<0.001).

To clarify the relationship between IL-17 and other inflammation cytokines on mRNA levels, we first examined mRNA expression of inflammation cytokines such as IL-6, TNF-α and IL-1β in PBMC from diabetic patients using real time PCR. Our results showed mRNA levels of TNF-α was significantly upregulated in patients with type 2 DM (Figure 2B). Although mRNA levels of IL-6 and IL-1β were increased, but no statistical difference was observed between control and type 2 DM group. We further analyzed the correlation between mRNA expression of IL-17 and inflammation cytokines including IL-6, TNF-α and IL-1β. No significant relationship between the expression of IL-17 gene and that of IL-6 or IL-1β gene was observed in PBMC from diabetic patients (Figure 3A and Figure 3C). However, there was significant correlation between IL-17 gene expression and TNF-α gene expression in PBMC from diabetic patients (r=0.6988, P<0. 001) (Figure 3B). 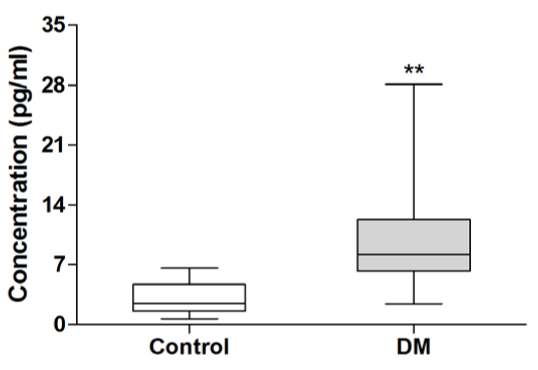 This study was designed to investigate IL-17 levels in patients with newly diagnosed type 2 diabetes. There are several notable findings in the present study. First, we found that serum levels of IL-17 in newly diagnosed patients with type 2 DM were significantly increased compared to healthy subjects. Second, we demonstrated that mRNA expression of IL-17 and its transcription regulator RORγt were markedly upregulated in PBMC from diabetic patients. Final, our data showed that IL-17 gene expression correlated with TNF-α gene expression in PBMC from diabetic patients. These results suggested that IL-17 might participate in the inflammatory process of type 2 diabetes and have a crucial role in the pathogenesis of type 2 DM.

Chronic low-grade inflammation is closely involved in the pathogenesis of type 2 diabetes. Elevated concentrations of various inflammatory markers such as tumor necrosis factor-α (TNF-α) and interleukin (IL)-6 and IL-1β have been reported in patients with type 2 diabetes [14-16]. There is evidence that inflammatory mediators not only represent markers of metabolic aberrations [17,18] but may also contribute to insulin resistance and β-cell dysfunction [19]. TNF-α as well as IL-6 are considered the major adipocyte cytokines [20]. Both can alter insulin sensitivity by triggering different key steps in the insulin signaling pathway [21-23]. IL-1β negatively affects β-cell function and plays a role in the pathogenesis of progressive β-cell failure in type 2 diabetes [24]. Our results demonstrated that mRNA expression of TNF-α, IL-1β and IL-6 were increased at different levels in PBMC from patients with newly diagnosed type 2 diabetes. Moreover, we found that IL-17 gene expression correlated with TNF-α gene expression in PBMC from diabetic patients. These results suggested IL-17 might participate in the pathogenesis of type 2 DM together with other inflammation cytokines.

Here we demonstrated that the expression of IL-17 is increased in patients with newly diagnosed type 2 DM. The exact role of IL-17 in the pathogenesis type 2 DM has not been explored. IL-17 is capable of inducing the expression of pro-inflammatory cytokines such as TNF-α, IL-1β, IL-6, chemokines and adhesion molecules, which mediate tissue infiltration and tissue destruction. In addition to stimulating the secretion of other pro-inflammatory cytokines, IL-17 is involved in the induction of potentially harmful mediators of inflammation, such as free radical nitric oxide [25]. Recent studies have described an ongoing process of β cell destruction by apoptosis in animal models of type 2 diabetes and in human type 2 DM [26,27]. In human islets, IL-1β has been shown to impair insulin release and to promote the apoptosis of β cell [28]. Several studies have pointed to the evidence that some cytokines such as TNF-α are involved in the apoptosis of β cell in synergy with IL-1β [29]. Further, Miljkovic D reported IL-17 could augment the expression of inducible nitric oxide synthase (iNOS) and cause NO-dependent toxicity in MIN6 cells and mouse pancreatic islets [11]. Therefore, it is possible that IL-17 might participate in the local inflammation and lead to the destruction of β cell in the pancreas in synergy with these inflammation cytokines.

In the study, our data indicated that IL-17 may be involved in the inflammation process of type 2 diabetes. But whether IL-17 is involved in the progression of type 2 diabetes is not conclusively clarified. Several issues are still unsolved. Recent study reported that the plasma level of IL-17 is increased in obese women [30]. Obesity is considered the main environmental cause for the development of insulin resistance and type 2 DM. Obesity is defined as BMI>25 kg/m2 in Asian. In our experiment, the average level of BMI in all patients is about 25.42 kg/ m2; and BMI levels were similar between diabetic patients and health subjects. As a consequence of narrow selection criteria, the subdivision of the patients’ groups was hardly enough to make clear estimations. Further study should be performed in a large number of diabetic patients including diabetic patients with low-level BMI (BMI<25) and diabetic patients with high-level BMI (BMI ≥ 25)in order to investigate the relationship between IL-17 and clinical parameters. Moreover, further studies is required to investigate the circulating levels of IL-17 in groups with impaired glucose tolerance (IGT) and diabetic patients with complications. Serum IL-17 level might be useful to predict an early detection of risk for type 2 diabetes, as well as being potential marker of established diabetic complications. On the other hand, we need to further explore the detailed mechanism of IL-17 involved in the pathogenesis of type 2 diabetes.