Copyright: © 2014 Hundal M, et al. This is an open-access article distributed under the terms of the Creative Commons Attribution License, which permits unrestricted use, distribution, and reproduction in any medium, provided the original author and source are credited.

Evidence based dentistry suggests that the need for restoration of partially edentulous condition is on the rise [1]. Not every patient presenting with a distal extension partially edentulous situation is a candidate for implant therapy either due to medical or financial limitations [2]. Therefore the cast removable partial denture (RPD) is here to stay until the stem cell research reaches a stage wherein the entire missing human tooth can be bioengineered in vivo.

The conventional extra coronal cast circumferential or bar clasp can be quite an eye sore when used in the anterior part of the mouth. Although precision attachments or resilient retainer systems may be used, conventional extra coronal clasp assembly still remains the most commonly used direct retainer because they are less technique sensitive and more versatile in their application. With this background we present two ‘Hidden clasp designs’ [3] for the distal extension situation which satisfies the criterion of esthetics and function in an apt manner. We do so through the following case reports incorporating these designs.

This case incorporates the Mesial Groove Reciprocation (MGR) clasp [4] which is an esthetic extracoronal retainer for the maxillary canine in a distal extension RPD when the canines are used as abutments. This case incorporates the Equipoise RPD System design which is an esthetic retentive concept for the distal extension situation especially when the premolars are used as abutments. A 35 year old wife of a serving army officer reported at the OPD of CMDC (NC) with chief complaints of compromised esthetics, pain in some of her cariously involved upper and lower teeth and difficulty in chewing food. 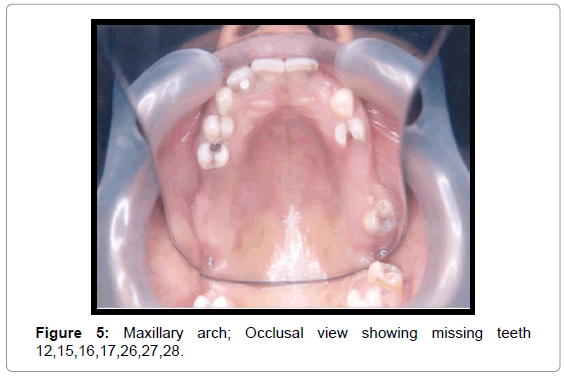 Restoring facial esthetics in a cast RPD while keeping the biomechanical principles in mind can be a challenge. Various hidden clasp designs are available which modify visibility of the direct retainer in the esthetic zone [5]. Some of these are the MGR clasp, saddle lock system, twin flex clasp [6], internally braced clasp [7] and the Equipoise RPD system.

In the MGR clasp design [8] retention is attained with a 19 gauge wrought I bar clasp arm the end of which engages a prepared ‘retentive dimple” on the distolabial surface of the canine (abutment) which is hidden from the frontal view. The surfaces of the abutment are modified as under mentioned:

b) Instead of a distal guide plane, a 1 mm retentive dimple is prepared in the centre of the distal half of the labial surface, gingival to the height of contour.

c) A vertical mesial groove guide plane 1-2 mm in length is prepared in the mesiolingual surface within the mesiomarginal ridge enamel nearly parallel to the planned path of placement as possible. This mesial reciprocation groove is extended over the mesiomarginal ridge to terminate in a spoon shaped mesial rest seat. This rest seat will usually require a small supplemental amalgam as dentin may be exposed when preparing sufficient depth for lateral force resistance.

d) Reciprocation for the retentive clasp arm is provided by both the distal proximal plate and the mesiolingual rod like minor connector which engages the above explained vertical mesial groove guide plane. Both these reciprocating features are parallel to the path of placement. Simultaneous, continuous tooth contact is maintained as the prosthesis is either seated or removed and as the clasp arm flexes over the height of contour in much the same manner as the reciprocation provided by a lingual plate.

The Functional dynamics of MGR clasp design are explained below:

a) Resistance to occlusogingival movement of the MGR clasp is provided by the occlusal rest and denture base.

b) Mesogingival relief in the retentive dimple and infrabulge contour gingival to the tooth contact of the disto proximal plate permits a non binding rotation of the denture base about the fulcrum of the mesial rest.

c) The Indirect retention is provided by a mesial rest anterior to the fulcrum line on the canine or premolar of the contra lateral side.

d) Functional rotation in maxillary distal extension prosthesis can occur but it is usually minimal because of the additional support provided by the broad palatal major connector.

e) Resistance to gingivoocclusal displacement of the MGR clasp is provided by the retentive clasp arm and the mesiolingual minor connector as well as the distal proximal plate.

drawbacks of the MGR clasp design are:

a) It can only be used on abutments with adequate crown height.

b) This design does not permit the retentive terminal to completely disengage from the tooth during functional movements of the prosthesis hence the major connector and base should provide as much vertical support as possible.

c) Extensive palatal coverage is usually necessary which may be uncomfortable for the patient.

The Equipoise RPD system [9] was proposed by J.J. Goodman and is an esthetic retentive concept for distal extension situation and works very well on premolar abutment. In this design the occlusal rest is placed away from the edentulous span. The equipoise clasp is a retentive lingual back action clasp which encircles more than 180° of the greatest circumference of tooth, extends from the mesial and circles around the lingual and distal surfaces of the tooth to engage the distobuccal undercut. It is kind to the abutment tooth as it disengages when the partial denture is in function. Vertical interproximal reduction of 0.5mm-1mm from tooth adjacent to the abutment is done so that rigid metal of the RPD framework can extend into this area which provides reciprocation (Figure 7). An optional bucco-lingual retentive groove at mid and gingival third junction on distal surface of abutment tooth may be provided. Goodman advocated that in addition to its esthetic superiority the unique class II lever design protects, preserves and strengthens abutment tooth while directing all forces down the long axis of the concerned tooth.

The drawbacks of this design are:

a) The concept does not work well on anterior natural teeth without visibility of the framework through the contact area.

b) The interproximal tooth reduction makes it carries susceptible.

e) During processing of the cast RPD, excess acrylic may surround the clasp thus preventing its flexure into the retentive undercut. Also the clasp may not seat completely in the mouth or may place unfavourable forces on the abutment tooth. “Freeing up” the clasp after processing is difficult and time consuming. To counter this, a stalite spacer is placed around the clasp during processing which can be easily removed during finishing and polishing procedure.

To conclude the MGR clasp and Equipoise clasp designs are good alternatives to the conventional extracoronal cast circumferential or bar clasp direct retainer in a distal extension partially edentulous situation thereby providing esthetically functional care which is the demand of today’s patient clientele.