In 1990 Blum, Noble and associates utilized a candidate approach to associate the first genetic polymorphic association with severe alcoholism that was published in JAMA. This experiment was based on a “blue print” of the reward circuitry proposed as the “brain Reward Cascade”. Impairment of this system leads to aberrant substance seeking behavior. Over the last five years newer and more sophisticated techniques have been developed, including whole genome sequencing, as well as exome sequencing. While there are different schools of thought regarding appropriate approaches to dissecting a very complex disorder known as Reward Deficiency Syndrome (RDS) as an umbrella term for all addictions, future approaches may combine both genome sequencing with gene candidates. Importantly, GWAS/WES generally provides the most value for highly penetrant, rare alleles and as such may not currently be as informative as the candidate gene approach. However, since there is convergence of GWAS and neurotransmitter clusters including specific genes (e.g. DRD1, DRD2, DAt1, etc.) albeit small contributions for each gene, thousands of studies have elucidated risk alleles to RDS behaviors. Thus, we are proposing herein that we should not hasten to “throw out the baby with the bathwater”, because genetic addiction risk stratification depends upon the current candidate gene analysis.

The need for genetic testing as a way of understanding or pinpointing therapeutic targets is certainly the wave of the future. It is well established that many polymorphisms since the earliest study from our laboratory on the DRD2 gene has morphed into a remarkable list of gene polymorphism associations in the field known today as Psychiatric Genetics. It is no longer acceptable simply to utilize Diagnostic and Statistical Manual (DSM) criteria as the only method of diagnosis of psychiatric disorders [1,2]. We are hereby proposing that coupling known standard pencil and paper tests (e.g., Addiction Severity Index among others) along with DSM and Genetic Addiction Risk Score (GARS) should enhance our information on each patient presenting for example to an addiction clinic for treatment. In fact it will provide a stratification risk profile removing current quessing, as well as DNA targeted therapeutic opportunities. It is further proposed that since we are beginning to understand the power of Genome Wide Association Studies (GWAS) [1]; Whole- Exome Sequencing (WES) and Epigentic Wide Association Studies (EWAS) studies, and especially epigenetics on gene expression via mRNA transcription, knowing these hot spots will pave the way for either highly specific pharmaceuticals directed at select neuronal sites (reduce toxic side effects) or nutrigenomic solutions. In either case, we strongly recommend additional studies to provide the recovering addict with an epigenetic [3-4] tool to activate DA D2 receptors while attenuating the anti-reward effects of DA D1 and possibly D3 receptors, respectively. Finally, we as neuroscientists should begin to perform studies that control for possible comorbid medical and psychiatric conditions in their research (dual diagnosis) this work supports earlier non-genetic concepts of addiction in psychiatric medicine [5-9].

We are cognizant that there is controversy related to the issue of the importance of both GWAS and WES analytical approaches relative to candidate association and linkage studies to unravel contributions of specific genes and associated polymorphisms to addiction liability. Our laboratory in the late 1980’s, realizing the complexity of the problem of both vulnerability and resilience for risk of drug abuse and other behavioral addictions, decided to analyze candidate genes based on a theoretical model we developed and subsequently published and identified as the “Brain Reward Cascade” [10]. Our initial approach utilizing this “blue print of reward” involved association rather than linkage analysis because Lander et al. [11] argued against linkage analysis for complex disorders like drug addiction instead of linkage analysis as previously accomplished with one gene – one disease (OGOD).

Important advances have been made over the last two decades concerning “Psychatric Genetics.” Certainly, substantial genetic contributions to addiction liability are now supported by earlier twin studies and more recently linkage, candidate association and GWAS studies. Animal studies initially focused upon genes that targeted major drugs of abuse mechanism of action. Many of these studies were successful in the identification of quantitative trait loci including association of chromosomal 9 (DRD2 gene) and ethanol behavioral responses [12] as well as other reward genes including serotonin, opioids and GABA [13]. Most of these and many other studies have identified gene/proteins that affect responses to drugs of abuse [14]. Parallel to these animal studies, human genetic research exploded over the last five years, to inexpensively detect genetic variation in the human genome. The era of genome sequencing began with the identification of single-nucleotide polymorphisms (SNPs) utilizing gene chips. Very recently we are also utilizing WES which utilizes high-throughput sequencing to identify the molecular arrangement of DNA base pairs specifying the coding regions of a person’s genome also referred to as the exome. While this is exciting, it may not have clinical utility, because the exome only comprises about 1% of the entire genome [15]. However, while the exome represents ~1-2% of the genome, 85% of currently described disease alterations are located within the coding regions (this 1-2%). The prudent argument here is that psychiatric disease may over-represented within the ~15% of alterations outside of the coding region (regulatory elements, epigenetic factors which are more often associated with multi-factorial diseases.

Compared to an enormous literature on candidate gene analysis (6120 studies) there is currently a paucity of GWAS/ WES studies relevant to addiction liability (239 studies). A commentary by Hall et al. [16] from NIDA and others have argued that candidate gene analysis may be wrong. However, they do suggest that from many GWAS studies the following: (1) many genes play roles in addiction; variants of genetic alleles additively contribute to risk for addiction; (2) classes of genes (such as reward circuitry based genes) are paramount in explaining both risk and resilience in all addictions; (3) considerable genetic differences exist, yet GWAS signal convergence occurs on particular candidate genes.

While there are many more examples showing promising convergence between GWAS and candidate gene analyses, albeit others showing no convergence, Li et al. [23] conducted a meta-analysis of GWAS and candidate gene analyses to interpret genetic risk for drug addiction and consider potential mechanisms associated with this risk. When they compared the lists of drug-related genes identified by molecular biological studies and those of association studies, they observed significantly higher participation in similar genetic interaction networks than expected by chance. This work is underscored by Li’s earlier work revealing that KARG analysis evaluated 1500 human genes regulating addictive behaviors and found that these genes significantly impact glutaminergic and dopaminergic pathways [24] (Figure 1). 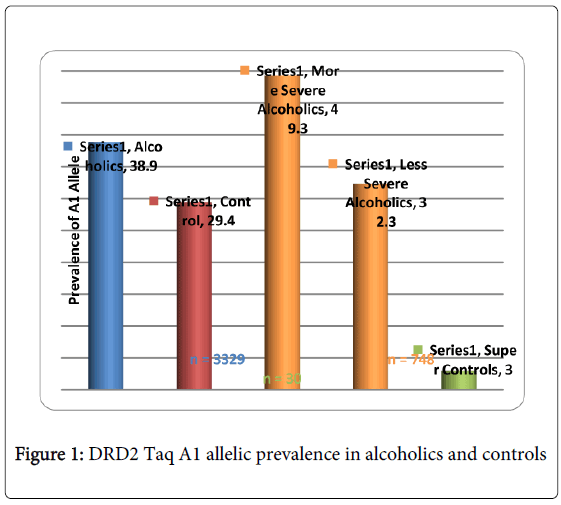 Figure 1: DRD2 Taq A1 allelic prevalence in alcoholics and controls

GWAS studies in psychiatry frequently fail to explain a large proportion of variance and non-replication of individual SNPs. Derringer et al. [25] utilizing a “selective scoring” whereby variants (273 SNPs) from eight dopamine-related genes for association with cocaine dependence were considered. They identified a four SNP score significantly associated with the variance. They suggested that (1) if only SNPs of genes with theoretical importance are investigated, than replicable effects are more likely to be identified; furthermore, (2) if a scoring approach evaluating the aggregate of the highest associated SNPs is utilized, than more replicable effects can be identified than would be revealed in individual SNP level studies. Along with these precautions, we also propose the utilization of “super controls” to eliminate cross contamination of having a control phenotype that also carries the associated disorder, especially when considering the complex nature of RDS. In one study, we found that while the risk allele of the DRD2 Taq A1 in over 3,000 non-screened population controls was 32%, super controls (screened for all RDS behaviors in the proband and family) was only 3% [26]. Also in developing GARS we are cognizant that the proposed test only provides risk stratification and not actual diagnosis of any disorder including RDS. Most importantly, full comprehension of “psychiatric pharmacogenomics” will undoubtedly involve epigenetic factors, such as DNA histone modifications (e.g. methylation and or deacetylation) that can affect responses to drugs and polymorphic antecedents for either vulnerability or resilience to reward behaviors like RDS [27-36]. Finally, GWAS/WES generally provides the most value for highly penetrant, rare alleles and as such may not currently be as informative as the candidate gene approach.

The writing of this paper was supported in part by funds from the National Institutes of Health, NIAAA (RO1-AA07112 and K05-AA00219) and the Medical Research Service of the US Department of Veterans Affairs (MOB). The authors appreciate the editorial assistance of Margaret A. Madigan and Paula J. Edge. Kenneth Blum is the recipient of a grant to PATH FOUNDATION NY, by Life Extension Foundation, Ft/ Lauderdale, Florida.

Kenneth Blum, PhD holds certain US and foreign patents related to genetic testing. Dr. Blum is also an officer and stock holder of IGENE, LLC and is a paid consultant of Dominion Diagnostics, LLC., IGENE, Malibu Recovery Center, and RDSolutions, LLC. Both Drs. Blum is a member of the scientific advisory board of Dominion Diagnostics, LLC and has a title of Chief Scientific Advisor.

Copyright: © 2014 Blum K, et al. This is an open-access article distributed under the terms of the Creative Commons Attribution License, which permits unrestricted use, distribution, and reproduction in any medium, provided the original author and source are credited.