Copyright: © 2015 Maji AT, et al. This is an open-access article distributed under the terms of the Creative Commons Attribution License, which permits unrestricted use, distribution, and reproduction in any medium, provided the original author and source are credited

Genotype × environmental interaction and stability estimate were investigated on grain yield of 30 upland rice varieties at Sabon Daga, Amakama, Yandev and Uyo in 2003. The experiments were laid out in a randomised complete block design with three replications. AMMI Anova for grain yield revealed no significant different among genotypes (P<0.01), but there is significant difference on environments and the interaction. The significant different on the interaction indicates that, the genotypes respond differently across the different environments. The partitioning of GGE through GGE biplot analysis showed that principal component1 and principal component 2 accounted for 62.21% and 28.57% of GGE sum of squares respectively, explaining a total of 90.78% variation. AMMI 2 biplot revealed that, genotype ART16-9-3-15-3-B-1-1 (8) gave the highest mean yield of 2925 kg/ha with high main additive effect better than the check varieties. Hence, the genotype would be considered more adapted to wide environments than the rest of genotypes. Environments, such as Sabon Daga and Amakama could be regarded as a more stable site for high yielding rice varieties compare to the other locations.

Rice (Oryza sativa L.) is the second most important cereals crop, grown in more than 144 million farm worldwide, most certainly than any other crop on a harvested area of about 162 million ha [1]. The author also reported that, global rice production rise more than tripled between 1961 and 2010, with a compound growth rate of 2.24% per year, most of the increase in rice production was due to higher yields, which increase at annual average rate of 1.74%, compared with an annual average growth rate of 0.49% for area harvested. He further stated that, per capital consumption of rice continues to grow fast particularly in most sub-Saharan Africa, where high population growth with changing consumer preferences is causing rapid expansion in rice consumption. In countries such as Kenya, Niger, Nigeria and Tanzania people are moving away from maize and cassava to rice as their income rises. Along with strong population growth, the rapid rise in per capita consumption also contributed to such rapid growth in rice demand.

In Nigeria, rice is a leading staple crop cultivated in virtually all the agro-ecological zones of country, from the mangrove and swamps environment of the coastal areas, to the dry zones of the Sahel in the North [2]. On the other side, the demand for rice has been soaring over years, since mid 1970’s rice consumption in Nigeria has risen tremendously growing by 10.3% per annum, as a result of accelerating population growth rate, increasing per capita consumption, rapid urbanization, increase income levels, and associated changes in family occupational structures [2-4]. GRISP [1] reported that, Nigeria is blessed with three major rice production environments and their coverage is rainfed lowland (69.0%), irrigated lowland (2.7%) and rainfed upland (28.3%). More than 90% of Nigeria’s rice is produced by resource poor small-scale farmers, while the remaining 10% is produced by cooperate/commercial farmers.

Numerous statistical methods have been developed for the analysis of Genotype by Environment Interactions (GEI) and phenotypic stability [5-8]. Regression technique has been widely used [9,10] due to its ease and the fact that its information on adaptive response is easily applicable to locations. The Principal Component Analysis (PCA) method that shows the mean squares of the principal components axes [11] has also been used. [12] Zobelet al. compared the traditional statistical analysis such as Analysis of Variance (ANOVA), Principal Component Analysis (PCA) and Linear Regression with AMMI analyses, and showed that the traditional analyses were not always effective in analyzing the multi-environment trial data structure. The ANOVA is an additive model that describes main effects effectively and determines if GE interaction is a significant source of variation, but it does not provide insight into the patterns of genotypes or environments that give rise to the interaction. The PCA is a multiplicative model that contains no sources of variation for additive G or E main effects and does not analyze the interactions effectively. The linear regression method uses environmental means, which are frequently a poor estimate of environments, such that the fitted lines in most cases account for a small fraction of the total GE and could be misleading [13-15].

Additive main effects and multiplicative interaction (AMMI) has been proved to be a suitable method for depicting adaptive responses [15-17]. AMMI analysis has been reported to have significantly improved the probability of successful selection [17] and has been used to analyse GxE interaction with greater precision in many crops [13,15,18]. The model combines the conventional analysis of variance for genotype and environment main effects with principal components analysis to decompose the GEI into several Interaction Principal Component Axes (IPCA). With the biplot facility from AMMI analysis, both genotypes and environments are plotted together on the same scatter plot and inferences about their interaction can be made.

This study, reports the use of AMMI model to analyse yield data of thirty genotypes of upland rice evaluate in four locations. The objectives is (1) to determine the nature and magnitude of G × E interaction effect on grain yield in diverse environment (2) to determine environment where upland rice genotypes would be adapted and produce economically competitive yield.

Thirty upland rice varieties selected from breeding task force upland mega environmental trial (MET) of 2012 are composed as preliminary yield trial (PET) in National Cereals Research Institute, Badeggi rice breeding unit, evaluated during 2013 cropping season at four locations as shown in Table 1. The experiment was conducted in a randomised complete block design in three replication, The plot size was 4 m × 3 m square with 20 cm inter and intra row spacing. Fertilizer application was 40 kg N, 40 Kg P2O5 and 40 Kg K2O at transplanting, while additional 40 kg N per ha was used as top dressing at vegetative and panicle initiation in equal split. Weed control was by chemical at 21 days after transplanting (DAT) using a formulation of Propanil and 2-4-D (Orizo Plus(R)), and was followed by hand weeding at 43 days after transplanting. Grain yield was recorded after harvest at 14% moisture content and was subjected to analysis of variance (ANOVA) using Crop Stat statistical package. In order to determine the effect of genotype × environment interaction on rice grain yield, the data was further subjected to an additive main effect and multiplicative interaction (AMMI), GGE-biplot and Boxplot analysis using Breeding View (BV) statistical package.

Table 1: Geographic description of coordinates of the trial location in 2013 cropping season.

Table 2: AMMI analysis of variance for grain yield of 30 rice genotype across 4 environments.

Box Plot is a convenient way of graphically depicting group of numerical data through their qualities. It displays varieties in samples of a statistical population without making any assumptions of the underlying statistical distribution [21]. The spacing between the different parts of the box indicates the degree of dispersion (spread) of the data and allows visually estimate of inter-quartile mean, median and mode. Result in Figure 1 is showing the distribution pattern of grain yield of 30 rice genotypes across four environments. The result revealed that, Sabon daga has the highest mean grain yield of 3692 kg/ha (Table 3) with large variance followed by Amakama with mean yield of 2940 kg/ha, while Yandev and Uyo discriminate less between genotypes with mean of 1719 and 1846 kg/ha, respectively. This is reflected in the smaller variance Przystalski [22] reported that, the genetic variance tends to be larger in better environments than in poorer environments. 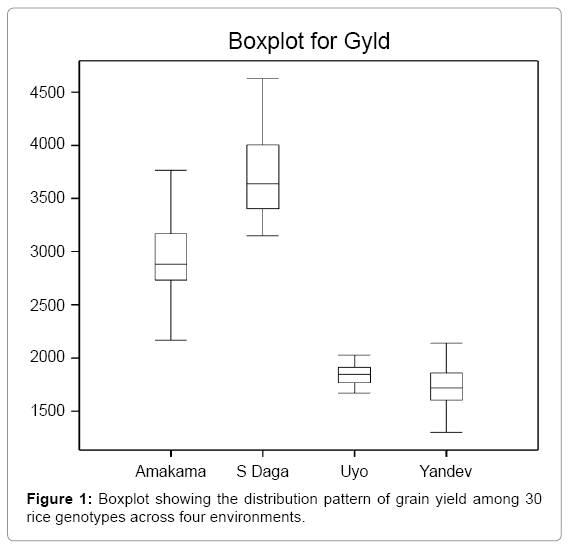 A desirable property of the AMMI model is that, the genotypic and environmental scores can be used to construct powerful graphical representations called biplots [19] that help to interpret the GEI, the biplot showing both genotypes and environments in the same plot. The author further stated that, biplots facilitate the exploration of relationships between genotypes and/or environments. Genotypes that are more similar to each other are closer to each other in the plot than genotypes that are less similar. The same is true for environments. Genotypes/environments that are alike tend to cluster together. Result in Figure 2 indicates that, S Daga location has the highest mean yield 3692 kg/ha, while ART12-1L6P7-8-1-B-1 (2) is the genotype with the highest mean yield. The result also shows that, there is no correlation between Amakama and Yandev/ Uyo locations. The projection of ART12-1L6P7-8-1-B-1 (2) and ART16-9-3-15-3-B-1-1 (8) on to S Daga axis reflects the higher mean yield performance of the genotypes. Similarly in Amakama genotype ART3-9L9P3-1-B-2 (22) and ART2- 6L6P6-1-B-1(10) performed best in the location, while genotype ART12-1L6P7-8-1-B-1 (2) and ART16-9-3-15-3-B-1-1 (8) has positive interaction with S Daga. It is also predicted that, genotype ART3- 3L12P9-1-1-B (15), ART3-7L9P8-3-B-B-2(20) and ART3-6L3P9- B-B-2 (16) has negative GEI values in S Daga because their projections were towards the negative direction of S Daga arrow. Also genotype FARO55 (23), ART16-22-1-1-2-B-1-1 (7) and WAB706-27-K5-KB-2 (28) have negative interaction with Amakama location. Generally, there was a poor yield performance in Yandev and Uyo locations as shown in Figure 2.

In the AMMI 2 biplot, (Figure 2) the environmental scores (locations) are joined to the origin by side lines. Sites with short vectors do not exert strong interactive forces (Uyo and Yandev). While those that long vectors exert strong interaction (S. Daga and Amakama). Weikai Yan reported that, a short vector indicates a location in which there is a small range of genotype performance. 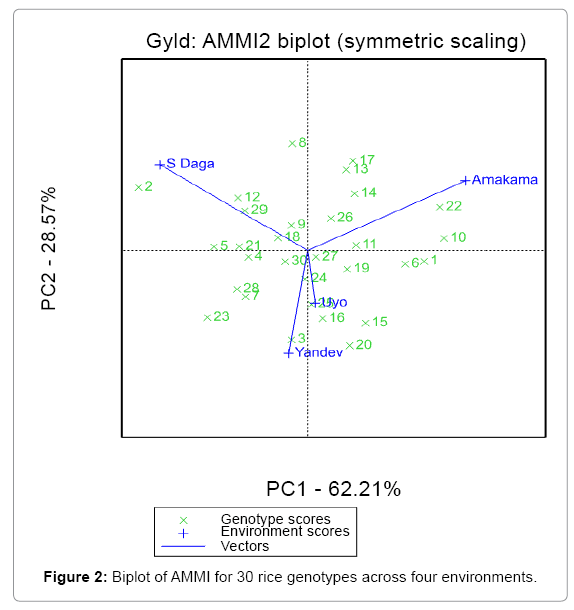 Figure 2: Biplot of AMMI for 30 rice genotypes across four environments.

The vertical Y axis is showing the best one dimension measure of the GE effect for each genotype. Thus, genotypes close to the X axis have a small GE effect, while those far away the X axis in either the positive or negative directions has a large GE effect. Figure 2 shows that, genotype ART10-1L12P2-1-B-1(1) and ART16-16-5-23-1-B-1-1 (6) has a small GE effect, which is considered stable and less influenced by the environments.

GGE biplot also allows the partitioning of environment into groups. In this study, three environmental groups are identified as shown in the Figure 3. S Daga and Amakama in the upper part are two different environments, while Yandev and Uyo close to each other at the origin form one similar environment. The partitioning of GGE through GGE biplot analysis of grain yield showed that, PC1 and PC2 accounted for 44.63% and 42.32% of GGE sum of squares respectively, explaining a total of 86.95% variation. GGE biplot shows the cosine of the angle between two environment vectors is proportional to the correlation between those two environments that is an angle of less than 90 degrees. The environments are positively correlated [21]. The result in Figure 3 shows a negative correlation between S Daga and Amakama indicating that different genotypes performed differently across the two environments. The distance between S Daga and Amakama in the GGE biplot is related to the independence of the genotype performance in the two environments, while the closeness of Yandev and Uyo location signifies that genotypes response patterns are similar in yield performance. Therefore to save resources, it is better to select only one location out of this group for further trials, Yandev location could be selected in group 3 as it has the longest vector (Tables 4 and 5). AMMI statistical model is a tool in selecting the most suitable and stable high yielding crop genotype for specific as well as for diverse environments. In the present study, AMMI model has shown that the largest proportion of the total variation in rice grain yield in the genotypes is attributed to environments. Most of the genotypes showed environment specificity. The mean grain yield value of genotypes averaged over environments indicated that ART16-9-3-15-3-B-1-1 (8) had the highest mean grain yield 2925 kg/ha. Genotypes ART10- 1L12P2-1-B-1(1) and ART16-16-5-23-1-B-1-1 (6) has a small GE effect, which is considered as stable and less influenced by the environment. 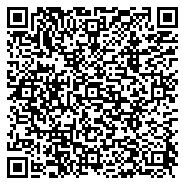