Mortality at a Portuguese Internal Medicine Service: Is Patient Allocation a Determinant Factor?

Copyright: © 2017 Sousa L, et al. This is an open-access article distributed under the terms of the Creative Commons Attribution License, which permits unrestricted use, distribution, and reproduction in any medium, provided the original author and source are credited.

Objectives: To verify if patient’s allocation by different wards is a determinant factor of mortality risk.

Participants were eligible to our study all patients admitted do Internal Medical care, who hadn’t been transferred from different specialty’s wards during hospitalization or remained at Intermediate Care Unit in Emergency Room more than 24 hours.

Conclusions: The present study highlight “patient allocation” as a determinant factor for early mortality risk. Further research is needed to understand which morbidity and mortality factors are associated with these findings.

In recent years, hospitalized patient’s complexity has progressively increased, contributing to increase in healthcare surveillance need and nursing. Despite the problem’s size, few studies have been dedicated to determine mortality predictors among hospitalized patients [1].

A previous study had identified Portugal as the southern-western Europe country with the most higher rate of excess winter mortality due to socioeconomic reasons, which could be reduced in part by increased public spending on health care [2]. In our service, during winter period, the number of patients requiring hospital admission exceeds the number of available beds so patients are often placed on other specialty wards.

Evidence support that the most significant factors associated with mortality risk are functional level of dependence, previously institutionalization, admission’s diagnosis, advanced age, masculine sex and dementia [3], other studies outline that there’s a peak mortality risk at 2nd day in-hospital stay [4,5], and that there is a difference in mortality of patients admitted during week compared to those admitted at the weekend, difference in which is thought to be related with reduction of staff members [6-16]. Likewise, the fact that a patient in need of medical care, has been admitted in to a different specialty ward, could mean that the quality of patient care may be compromised and therefore the risk of death increased.

If this hypothesis is confirmed, this could mean that hospital organization should be rethought. In the literature, little is said about hospital allocation as a predictor factor for mortality. Taking this in to account, we hypothesized that patient allocation could be a determinant mortality risk factor.

We identified, using data collected from clinical charts, every patient admitted to Internal Medicine care, from emergency department, between January 1st to January 31st, 2015. This period was chosen based on the large number of patients observed, corresponding to approximately twice the Internal Medicine Service’s bed capacity.

Patients transferred from other specialty wards to Internal Medicine Service ward during hospitalization or patients that remained at Intermediate Care Unit in Emergency Room more than 24 hours, were excluded from the study. We identified every patient who had died in this period of time and then our sample was divided in two groups: patients allocated in to Internal Medicine Service (4C, 4D, 4E) and those in the remainder services.

Secondary diagnoses included comorbidities and all diagnoses made at admission and during hospitalization.

A Charlson Comorbidity Index (CCI) [17,18] was used to access mortality risk at admission. This is a weighted index based on a mathematical model that takes into account the number and the severity of comorbid diseases, a valid method to estimate death’s risk from co-morbid disease in medical patient [19].

Sample characteristics were described by means, standard deviation, frequencies and percentages. Mortality means were compared for inpatient’s death at second day of hospitalization and during total stay. We used a t-student test for independent samples to compare mortality means between the two groups, we also compare groups for time to death (number of hospitalization days until death), using SPSS Statistics 22.0. (Figure 1) Potential confounding factors (previously described) were also compared using a t-student test and a chi-square test. For significance level we used a p-value (p<0.05) and effect size tests (Figure 2). 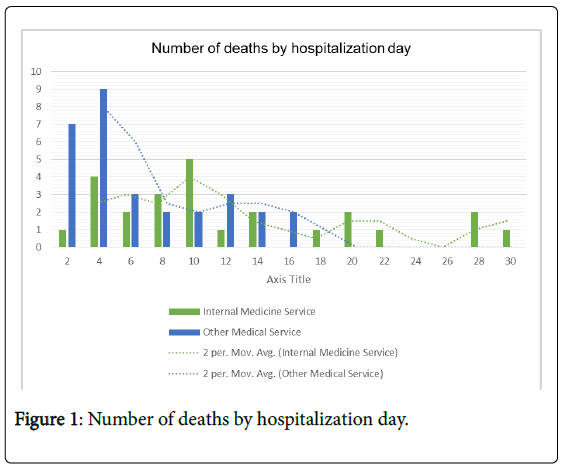 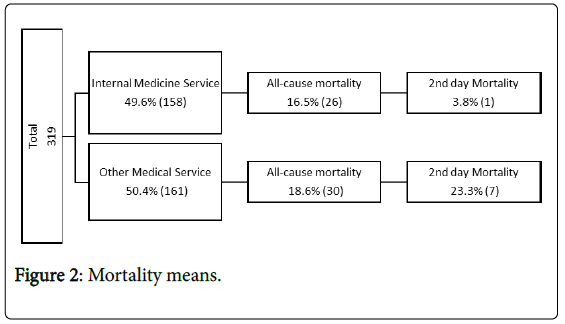 Hospital de Braga’s Internal Medicine Service is located on the 4th floor, lying over 3 wards (4C, 4D and 4E), each of which has 30 beds, divided into 17 double rooms and 4 individual rooms. There are also five beds available in another ward (ward 4B) that is shared with Cardiology and Pneumology (in this study this ward was considered "other service" because nursing care isn’t differentiated by specialty). Other service wards have the same logistics. In January patients hospitalized in to Internal Medical care were allocated on the following services: Internal Medicine Service (4C, 4D, 4E) 49.6% (158) patients; Cardiology/Pneumology/Internal Medicine (4B) 1.88% (6) patients; Oncology/Nephrology (1C) 5.33% (17) patients; Neurosurgery (1D) 0.63% (2) patients; General Surgery (2B) 0.94% (3) patients; General Surgery/Plastic Surgery/Gastroenterology (2C) 0.94% (3) patients; Urology/Otorhinolaryngology/Vascular Surgery (2D) 2.51% (8) patients; Urology (2E) 5.96% (19) patients; Orthopedics (3B, 3C and 3D) 14.4% (46) patients; Neurology/Physical Medicine and Rehabilitation (3E) 4.39% (14) patients; Gynecology (5D) 5.33% (17) patients and "Common Services" (1E and former Pediatric Intermediate Care Unit) 7.52% (24) and 0.63%(2) patients respectably. For each ward, nurse/patient ratio varied from 1/7 to 1/12. Patients distribution by service, corresponding mortality means and the nurse/ patient ratio are described in the (Figure 3 and Table 1). 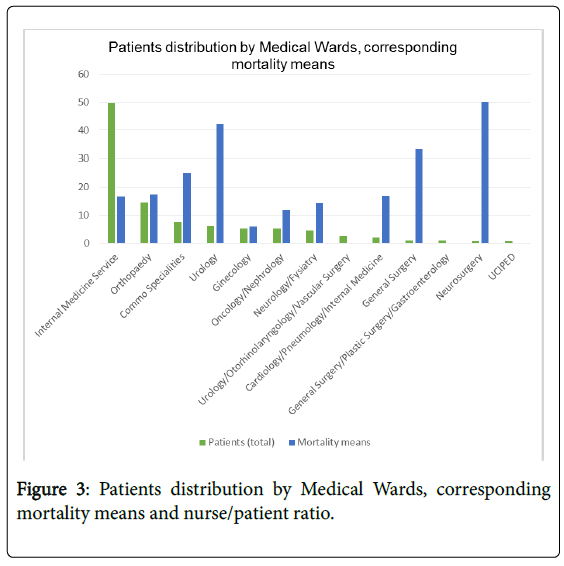 As expected, the number of patients observed exceeded in more than 50% the number of Internal Medicine Service’s available beds. Like in other studies, our patients had advanced age, the majority had several comorbidities and were dependents in daily activities. They were hospitalized mostly for a respiratory disease and had at least one prior hospital admission in the last year [3,17,18].

Hospital’s mortality monitoring helps to assess and improve quality of care. Several studies have determined the biological/pathological factors associated with increased risk of death in hospitalized patients, but little is the existing evidence regarding the factors associated with quality health care and its contribution to mortality risk. This study has shown that “patient allocation” could be a determinant factor for early mortality risk. We demonstrate that there was a significant difference in 2nd day mortality. Patients admitted to other medical ward, seem to die sooner that those admitted to Internal Medicine service ward but, contrary to what it might seem from our clinical experience, this study showed no significant differences in mortality means.

Authors are unaware of the associated factors, but suggests that these differences could result from differences in levels of service staffing (and consequently a minor capacity for patient’s monitoring in those with a smaller nurse/patient ratio) and physical barriers to medical attention (since Internal Medicine doctors spent most of their time in their service ward).

Strength and limitations of this study

We used a comparative design that demonstrated significant differences even with a small sample and effect size analysis shown that the variable implicated had impact as mortality factors.

The two groups analyzed were similar for variables described in previously studies as factors associated with increased mortality risk, so results were not influenced by age, sex, dependence level, admission diagnosis, number of comorbidities/secondary diagnosis, number of admissions in previous year and Charlson Comorbidity Index, but other factors like week/weekend were not included.

This study is a retrospective analysis; some information may have been lost. The period of time analyzed and sample size were small and was based on data from only one Medical Service care, in which organizational structure may be different from other hospitals in other regions and countries.

The number of patients distributed by medical wards did not allow to analyzed significant differences between mortality means.

Despite of are limitations, this paper can be a pilot study contributing for future prospective research studies.

The present study highlight “patient allocation” as a determinant variable for early mortality risk but further studies are needed to identify which morbidity and mortality factors are associated with it.

We thank Patrício Costa and Mónica Gonçalves, from the Clinical Academic Center – Braga (2CA-Braga) for the support and enthusiasm for the project.