Patients' Misconceptions Regarding HIV Testing: A Communication Gap in the Ambulatory Care Setting

Undiagnosed human immunodeficiency virus (HIV) infection is associated with increased morbidity, mortality, and healthcare costs. Despite recommendations for standardized, non-targeted, opt-out HIV testing, a substantial subset of HIV-infected individuals remain undiagnosed. We performed an anonymous, voluntary, cross-sectional survey among adult patients visiting an internal medicine clinic at the University of Florida to assess whether potential misconceptions of patients regarding routine blood work could contribute to underdiagnosis of HIV. We developed one question to assess participants’ beliefs regarding consistent HIV screening via routine laboratory tests: “I think my doctor checks me for HIV/AIDS every time he/she checks my blood.” The question had five answer options arranged in a 5-point Likert-type scale: “strongly agree”, “agree”, “neither agree nor disagree”, “disagree”, or “strongly disagree.” Of the 78 patients who participated in the study, 39 (50%) either “disagreed” or “strongly disagreed” that routine laboratory tests detect HIV. The “neither agree nor disagree” option was selected by 26 (33%). Ten participants (13%) “Agreed” or “strongly agreed” that routine laboratory testing detects HIV. Our study highlights the need for improved communication between healthcare providers and patients about the nature of the laboratory tests and their implications as they relate to HIV screening.

Human immunodeficiency virus (HIV) infection is associated with increased morbidity, mortality, and healthcare costs [1]. The number of individuals acquiring HIV infection is estimated to increase annually by 40,000-56,000 cases [2]. Early identification of HIV infection and initiation of antiretroviral therapy (ART) reduces clinical events and mortality in infected individuals and can decrease HIV transmission to others through reduction in viral load and changes in high-risk behavior [3]. Unfortunately, a significant subset of HIV-infected individuals do not know about their infection. In fact, according to the World Health Organization, only 54% of people with HIV infection in 2015 were aware of their HIV status [4]. In the United States, nearly 14% of the estimated 1.2 million individuals living with HIV infection remain undiagnosed [1].

Barriers to universal HIV screening can be patient or providerrelated. Identified provider-related barriers include lack of familiarity with current HIV screening guidelines, uncertainty about consent recommendations, and concerns about patients’ perception and refusal [5,6]. In fact, despite recommendations for universal HIV screening, risk-based screening persists and screening rates remain unsatisfactory [7]. Identified patient-related barriers include cost of testing, inconvenience of testing centers and return visits for counseling, feeling invincible and at low self-perceived risk of HIV acquisition, fear of rejection and discrimination, perceived stigma associated with HIV diagnosis, fear of dying, concerns about lack of anonymity, misconceptions regarding the epidemiology and transmission of HIV, and preferring to not know their diagnosis rather than having to disclose it to their partners or families [8-11]. Several studies have also reported patient misconception regarding inclusion of HIV screening in laboratory studies prior to orthopedic surgery or in the emergency departments (ED) [12-14]. In the primary care setting, patients may undergo "blood tests" without being informed exactly what conditions they are being tested for. However, the conditions patients believe they have been screened for using routine “blood tests” ordered by their primary care providers (PCPs) has not been extensively explored. We sought to assess the prevalence of the misconception among adult patients that their PCPs consistently include HIV testing in their routine blood work.

This study was a cross-sectional, anonymous, and voluntary survey with a convenience sample.

The study was approved by the institutional review board at the University of Florida and took place in an outpatient internal medicine clinic at the University of Florida, College of Medicine in Alachua County (Gainesville, Florida, United States). The medical providers in this clinic consist of internal medicine faculty and resident physicians. There were 15,854 patient visits in 2015. The patients are generally adults 18 years and older of age, with the following payer mix: 46% Medicare, 41% Private/Commercial/Managed Care, 8% Medicaid, and 5% Self-Pay. The prevalence of HIV in Alachua County is 385 per 100,000 populations [15].

All adult patients visiting the clinic during April 2015 were provided with written information about the study and invited to participate by completing the 26-item questionnaire. The informational material contained language that "completing this survey, you are verifying that you have read the explanation of the study and that you agree to participate. You also understand that your participation in this study is strictly voluntary." Refusal rate was not recorded. We did not calculate a sample size and recruited as many patients as possible while the study was ongoing.

As part of a 26-item questionnaire to examine patient’s attitudes towards a medical intervention, one question was specifically developed to assess participants’ beliefs regarding consistent HIV screening via routine laboratory tests ordered by their PCPs: “I think my doctor checks me for HIV/AIDS every time he/she checks my blood”. To avoid excessive focus on HIV testing, this question was grouped with two items regarding consistent screening for diabetes and colorectal cancer (CRC) by routine laboratory tests as these two diseases have established and widely adopted screening recommendations: (1) “I think my doctor checks me for diabetes every time he/she checks my blood” and (2) “I think my doctor checks me for colon cancer every time he/she checks my blood”. All three questions had 5 answer options arranged in a 5-point Likert-type scale: “strongly agree”, “agree”, “Neither agree nor disagree”, “disagree”, or “strongly disagree.” The questionnaire also included demographic questions, such as age, race, and level of education. The reliability and validity of this survey instrument were not examined. 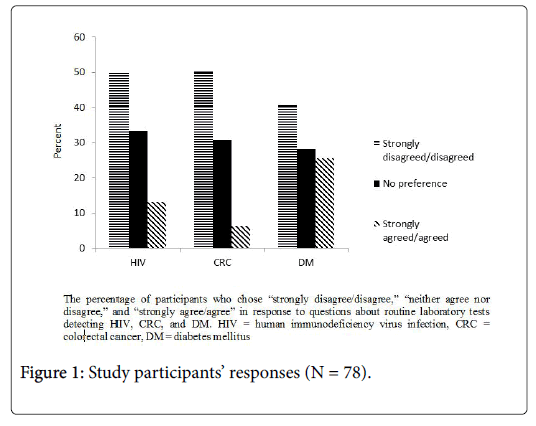 The patients in this study had a surprisingly high degree of misconception regarding the nature of routine laboratory studies. Despite the fact that health care providers in the United States are mandated to inform patients of their decision to perform an HIV test, only half of the patients in this outpatient clinic were aware that they were not routinely screened for HIV. Furthermore, the patients who were unsure of whether they have been HIV tested may consider their prior testing history in a manner similar to those who believe inaccurately that they have been tested. This misperception is plausible, given reported deficiencies in health literacy, confusion about medical terminology, and discrepancies between self-reported and perceived risk [16]. Our findings highlight the importance of improved communication with patients when discussing laboratory tests and addressing misperceptions about implications of results as well as screening for disease during a health encounter; reducing such misperceptions could eliminate false reassurance and ensuing consequences. While the strength of correlation between lower education level and HIV testing misperception was weak, our results suggest that patients with lower education level would benefit the most from improved communication and patient education.

While we grouped the HIV testing question with 2 other screening questions, we did not ask our patients about their interpretation of the lack of communication of test results. However, if our patients who believed they had been HIV tested also assumed that no result communication indicated a negative HIV test, as observed in the study by Albrecht et al. among surgical patients, they might have been falsely reassured about their negative HIV status [3]. The incorrect assumptions concerning routine HIV testing and the false reassurance might influence patients’ decisions not to undergo appropriate screening, disclose high-risk behavior, or seek appropriate testing for sexually transmitted diseases in the future [18,19]. These factors have potentially important implications and could conceivably contribute to late diagnosis of HIV, delayed initiation of ART and preventive care for HIV-infected individuals, continued risky behavior, and onward transmission of infection [6,20]. Other potential consequences of patients’ misperceptions regarding routine HIV testing include unintentionally misinforming healthcare providers about previous HIV tests and providing inaccurate self-report when surveyed for surveillance estimates [20].

While to our knowledge, our study is the first one to explore whether a significant proportion of patients visiting an internal medicine clinic believe they are consistently screened for HIV by routine laboratory testing ordered by their PCPs, it has a number of potential limitations. The main limitations of this study include its small size and collection of data at a single academic center. The generalizability of our findings also depends on the degree to which our convenience sample represents the clinic population as a whole. Since we did not use a randomly selected sample, patients who do not seek medical care often and were therefore not in the clinic as well as individuals with low reading or health literacy who refused to take the written survey might be underrepresented in our study. Moreover, our clinic may not be generalizable to other settings. Future studies are needed to evaluate the generalizability of these findings. Our study was designed as a descriptive exploration and the small sample size might have limited our ability to detect associations between patient characteristics and responses with statistical rigor. Furthermore, we did not examine socioeconomic factors such as income and insurance status or risk factors for HIV, and could not verify whether patients were familiar with the conditions they were questioned about. Finally, we did not pilot our questionnaire and do not have information about the reliability and validity of our survey instrument.

Our study suggests that a significant subset of patients might be equating blood testing ordered by their PCP with comprehensive screening for disease, including HIV. Our results highlight the need for improved communication between healthcare providers and patients about the nature of the laboratory tests and their implications as they relate to disease screening, including HIV. Patient’s enhanced understanding of routine laboratory tests can in turn lead to disclosure of their risk factors, or seeking HIV screening when appropriate. Improved communication between patients and their healthcare providers can ultimately facilitate detection of new cases of HIV infection, reduce HIV transmission rates, and decrease the proportion of individuals diagnosed late in the course of disease.

Copyright: ©2017 Kazory A, et al. This is an open-access article distributed under the terms of the Creative Commons Attribution License, which permits unrestricted use, distribution, and reproduction in any medium, provided the original author and source are credited.