Copyright: © 2017 Yamazaki Y, et al. This is an open-access article distributed under the terms of the Creative Commons Attribution License, which permits unrestricted use, distribution, and reproduction in any medium, provided the original author and source are credited.

A 68-year-old man underwent extraction of a left mandibular third molar and the mesial root of the left mandibular first molar by a dentist in November 2014 after suddenly developing toothache. In May 2015, he visited our clinic complaining of episodes of persistent pain in the left mandibular first molar, but could not give a clear description of the pain. Evoked pain was absent and there were no abnormal findings on a dental panoramic radiograph. The patient’s pain was diagnosed as atypical odontalgia of the left mandibular third molar and treated with Rikkosan (TJ-110) 2.5 g, followed by 3 times daily dosing. His pain resolved after 6 weeks and the treatment was stopped. In October 2015, the patient returned to the clinic with left mandibular pain suggestive of trigeminal neuralgia. Magnetic resonance imaging of the head confirmed neurovascular compression of the left trigeminal nerve root entry zone. Carbamazepine and baclofen treatment relieved the pain effectively, but were stopped because of side effects. Microvascular decompression surgery was performed in January 2016 and the pain resolved completely. The efficacy of carbamazepine and microvascular decompression surgery in this patient confirmed a diagnosis of trigeminal neuralgia and that this patient’s initial toothache was attributable to pre-trigeminal neuralgia. Pretrigeminal neuralgia should be borne in mind in patients presenting with atypical odontalgia, and their pain should be monitored for changes occurring over time.

Some patients with trigeminal neuralgia (TN) complain of pain that differs from that of classical TN, before the appearance of the pain that is typically associated with the disorder. Several studies have reported that patients with TN may experience pain that is not characteristic of TN in the initial stages [1-7]. Mitchell referred to this pain as “pretrigeminal neuralgia” (PTN) [2]. Typical symptoms of PTN are dull and aching pain, burning, sore gums, pins and needles, throbbing, a feeling of pressure, and electric shock-like sensations [2,3].

Symptoms of PTN are similar to and difficult to differentiate from those of dental disease [2-8]; thus, some patients with PTN undergo unnecessary dental treatment [2,4,5]. It is difficult to diagnose PTN on the basis of clinical symptoms alone because PTN cannot be diagnosed until the onset of TN [9]. The reported interval between onset of PTN and development of TN ranges from a few days to several years [2,4].

Atypical odontalgia is a subtype of persistent idiopathic facial pain (PIFP) [10], which has pain characteristics similar to those of PTN and also needs to be differentiated from PTN [4,5]. Here, we report on a patient who was diagnosed initially as having atypical odontalgia on clinical grounds but whose pain subsequently developed into TN. Consequently, we believe that his initial pain was PTN.

The patient was a 68-year-old man with a history of hypertension, hyperuricemia, and arrhythmia. He had undergone a follow-up examination for these conditions by his doctor, but was not receiving medication. He was allergic to loxoprofen sodium hydrate.

The patient visited a dental clinic in November 2013 with a complaint of sudden-onset toothache. His pain was attributed to a decayed left mandibular third molar, which was extracted in January 2014. However, his pain did not resolve. The patient also underwent root canal treatment to the left mandibular first molar at this time, but again there was no improvement in his pain. In June 2014, he underwent extraction of the mesial root of the left mandibular first molar, again with no resolution of his pain. He then visited the Orofacial Pain Clinic at Tokyo Medical and Dental University Hospital of Dentistry, Japan, to determine the cause of his toothache, in March 2015. Figure 1: A dental panoramic radiograph taken at the time of presentation.

However, the patient visited our clinic again in August 2015 complaining of a quivering pain. Rikkosan was administered again, but was not effective. He complained at this time that he could not eat his meals because of the pain. In October 2015, his visual analog scale score for spontaneous pain was 32 mm and that for occasional shooting pain was 70 mm. His pain changed 2 weeks later: he felt irregular spontaneous pain for 15 minutes, without experiencing pain at meals. His pain was worse at night. These symptoms were not improved by treatment with traditional Japanese medicine, i.e., Keishikajutsubuto (TJ-18), Goreisan (TJ-17), and Rikkosan (TJ-110).

In November 2015, the patient began to experience transient throbbing and shooting pain in his left mandible when talking and touching the area, and irregular spontaneous bouts of pain lasting for about 3 min. His pain was also waking him at night. It was noted that these pain manifestations were similar to those of classical TN. The final diagnosis was TN, and the patient was started on carbamazepine 100 mg once daily in the evening. His pain at night resolved within a few days, but remained in the daytime. Carbamazepine 100 mg twice a day was prescribed to relieve his pain during the day. The patient was keen to undergo microvascular decompression surgery to relieve his pain, and was referred to our neurosurgery colleagues. Unfortunately, a pleural effusion was found on a medical examination at this time; hence, the baclofen was stopped and the patient was prescribed Rikkosan (TJ-110) 7.5 g/day and Goreisan (TJ-17) 7.5 g/day until the time of surgery. The medication flow chart is shown in Figure 3. He underwent microvascular decompression surgery in January 2016. Thereafter, his pain disappeared. 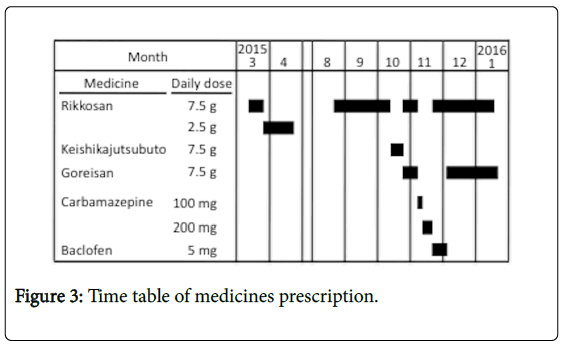 Classical TN is described in the International Classification of Headache Disorders 3rd edition beta version (ICHD-3 beta) as follows. Classical TN occurs in one or more divisions of the trigeminal nerve, with no radiation beyond the trigeminal distribution and has the following characteristics: 1. recurring paroxysmal attacks lasting from a fraction of a second to 2 minutes, 2. severe intensity, 3. electric shocklike, shooting, stabbing, or sharp in quality, 4. precipitated by innocuous stimuli to the affected side of the face [10]. Some patients with TN have complained of a different type of pain in the initial stages, and this pain is now recognized as PTN, which has been investigated PTN since the first report of this entity by Symonds [1]. According to some studies, about 20% of patients with TN experience PTN before the onset of TN symptoms [2,6]. Reports of the interval between the onset of PTN and the development of TN vary [2,4,9]; in our patient, the interval between the first complaint of pain and diagnosis of TN was approximately 2 years.

Our patient’s pain was relieved by carbamazepine and baclofen, and was resolved completely after microvascular decompression surgery. Consequently, we diagnosed his pain as classical TN. A diagnosis of TN cannot be made until the development of a paroxysmal pattern of pain [1,9]. In our patient, it was not until the development of TN that his initial pain was recognized as PTN. The pathology of PTN is thought to be the same as that of TN, because membrane-stabilizing medication has an effect on both entities. However, PTN does not have identifying characteristics, and thus it is difficult to provide appropriate treatments for this phase of TN.

Diseases that should be distinguished from PTN include odontogenic pain, temporomandibular joint disorder, myofascial pain disorder, migraine, and atypical odontalgia [2-5]. PTN is usually localized to the upper and lower jaws, especially the posterior teeth [2,3], and therefore PTN is easily misdiagnosed as odontogenic pain, such as apical periodontitis. PTN is associated with constant pain, for which local anesthesia is occasionally effective, and it is difficult to differentiate PTN from odontogenic pain [3,7,8]. Wright and Evans reported that they could not identify a specific pain characteristic or recommend a test that could definitively differentiate between PTN and odontogenic pain. Many patients with PTN receive unnecessary dental treatment [1-6]. Our patient also underwent dental treatments in the early stages of his pain, but these did not help to relieve his pain.

Atypical odontalgia is thought to be a subtype of PIFP, and the symptoms of PTN and PIFP are similar (Table 1). The ICHD-3 beta defines PIFP as persistent facial and/or oral pain with varying presentations, but which recurs daily for more than 2 h per day over more than 3 months, in the absence of a clinical neurologic deficit [10]. The quality of PIFP-associated pain is dull, aching, or nagging [10]. Depending on the patient's complaints, PTN may be diagnosed as atypical odontalgia. Furthermore, a patient may be pain-free for a period of time [2,4], as in our case. Therefore, longer term follow-up is necessary after a diagnosis of atypical odontalgia.

We encountered a patient with PTN that mimicked atypical odontalgia before the development of TN. The pain disappeared after microvascular decompression surgery. This case suggests that patients with symptoms of atypical odontalgia should be monitored carefully over time in view of the possibility of PTN.