Rice as a Source of Fibre

Copyright: © 2013 Fernando B. This is an open-access article distributed under the terms of the Creative Commons Attribution License, which permits unrestricted use, distribution, and reproduction in any medium, provided the original author and source are credited.

The production, utilization, and stocks of cereal in the world increases each year (Figure 1) among the cereals rice is the second largest produced cereal in the world [1]. Rice is edible starchy cereal grain. Large part of the world population, including virtually all of East and Southeast Asia, is wholly dependent upon rice as a staple food; 95 percent of the world’s rice production is eaten by humans and has been a source of food for people from 2500 B.C. Rice production was initiated in China, and spread to countries such as Sri Lanka and India [2]. Twenty percent of the world’s dietary energy is provided by rice which is higher than either wheat or maize [3]. In addition rice is an important grain for nutrition and caloric intake [4]. 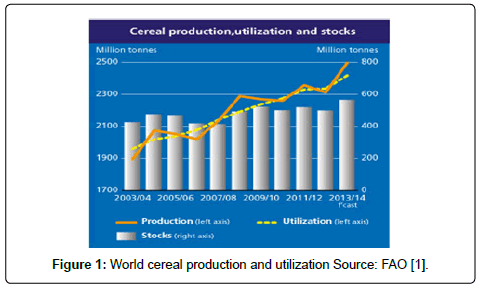 Rice (Table 3) is an excellent food source and rich in vitamins and fibre. Freshly harvested rice is called paddy grain or rough rice. The rice grain (rough rice) consists of the hull, and the rice caryopsis [5]. Underneath the hull, bran, germ, and endosperm are present. Rice is classified basically in to two forms; brown and white rice. Brown rice is produced by dehusking the hull (Figure 2). Un-milled rice has more protein and fibre than the milled or polished rice and can be considered as more nutritious [6]. Rice is ground into several milling grades to obtain the different types of rice flours and grains. This includes: brown rice (only hull removed), unpolished rice (hull, bran and most of the germ removed), and polished rice (aleurone layer removed from unpolished rice) [7]. As in (Table 1 and 2), the major impact of milling on rice is to manipulate the nutritional composition of the grain. 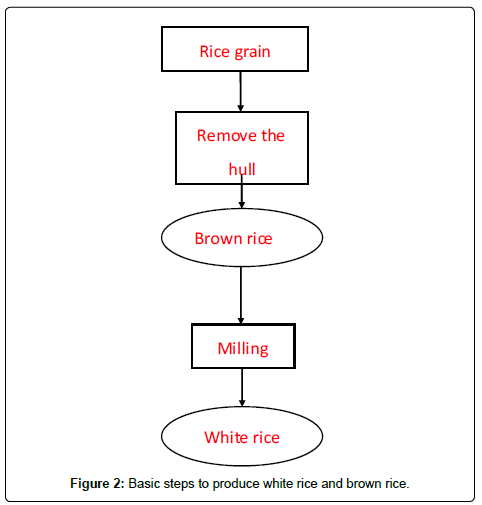 Different layers (Figure 2) of rice have different quantities of fat, carbohydrate, protein and fibre, and removing the different layers in the milling process alters nutritional quality. The milling of brown rice involves the removal of the pericarp (outer bran layer), seed-coat, aleuronic layer, and embryo. This results in the loss of fat, protein, crude and neutral detergent fibre, ash, thiamine, riboflavin, niacin and a-tocopherol in milled rice (Table 1). The other fraction of the rice grain, rice bran, contains an appreciable quantity of crude fibre. Rice bran fibre largely consists of non cellulosic polysaccharide (24%), cellulose 10.3%), and lignin (10.7%) [9].

The nutritional composition of rice differs with variety, condition of the soil, environmental factors, and fertilizers used [10,11].

Soluble and Insoluble Fibre in Rice

Arabinoxylans, along with some amount of β-d-glucans (Figure 2), are the major components of SDF (soluble dietary fibre) [12] present in rice. In addition, rhamnose, xylose, mannose, galactose, and glucose (Figure 4), can be found as part of the SDF [12]. Cellulose hemi cellulose and insoluble β-glucan and arabinoxylans make up the IDF (insoluble dietary fibre) [13]. However, the amount and the quantity of these non starch polysaccharides in rice are dependent upon the rice cultivar, degree of milling, and water solubility. In addition the water solubility of non starch polysaccharides is mainly governed by the rice variety, rather than the degree of milling [13].