Copyright: © 2017 Pullen RV. This is an open-access article distributed under the terms of the Creative Commons Attribution License, which permits unrestricted use, distribution, and reproduction in any medium, provided the original author and source are credited.

Objective: Failure to identify and treat all canals within the root canal system is a major reason for endodontic failure. The morphological variations of the maxillary first molar have been the subject of many studies, with most studies focusing on multiple canals within the mesiobuccal root, but maxillary molars may also have fins, isthmi, lateral canals, and in this case, additional palatal canals. Identification and treatment of all canals and anatomical variations is vital for a successful endodontic outcome. Methods: A maxillary first molar with pulpal necrosis and asymptomatic apical periodontitis due to a deep carious lesion was accessed for root canal treatment under a dental operating microscope. Four canals were minimally instrumented to an apical size #20 and treated with the GentleWave® Procedure. The GentleWave Procedure involves Multisonic Ultracleaning™ that creates cavitation with activated distilled water, sodium hypochlorite and ethylenediaminetetraacetic acid (EDTA). After the GentleWave Procedure, a fifth canal, not previously realized, was detected in the palatal root. The fifth canal had been visibly cleaned of debris. Five canals were obturated utilizing gutta-percha and warm vertical condensation with an epoxy resin based sealer. Results: Post-operative radiographs show 5 root canals: 2 palatal canals, 2 mesiobuccal canals, and 1 distobuccal canal. A cone-beam computed tomography (CBCT) scan shows a three-dimensional fill and obturation of complex anatomy. Three-month follow-up evaluation shows radiographic and clinical healing, resolution of periapical lesions, and complete resolution of the clinical symptoms. Conclusion: This case reports describes successful endodontic treatment of a rare maxillary molar with 5 canals, one of which was uninstrumented, utilizing an advanced technology, the GentleWave Procedure. This report highlights the importance of identifying and cleaning complex anatomy to increase successful outcomes.

A recent advance in endodontic technology, the GentleWave Procedure (Sonendo®, Laguna Hills, CA), offers clinicians the ability to clean areas of the root canal system often untouched or undetected by conventional techniques [9]. The GentleWave Procedure utilizes Multisonic Ultracleaning technology, in which advanced fluid dynamics, acoustics, and tissue dissolution chemistry are applied to remove tissue and debris from the entire root canal system, even in areas that conventional endodontic treatment cannot reach [9]. Recent in vivo clinical studies with 6- and 12-months follow-up demonstrate a high rate of success (97.3-97.4%) after the GentleWave Procedure [10,11]. The GentleWave® System removed 100% of calcium hydroxide from mesial canals instrumented to size #25 in vitro [12]. The GentleWave System was also shown to be effective in removing separated instruments from the apical and middle thirds of molar root canal systems without the need for increased dentin removal for access [13].

This case report describes successful endodontic treatment of a rare maxillary first molar with five canals, including two palatal canals, one of which was un-instrumented, two mesiobuccal canals, and one distobuccal canal, after the GentleWave Procedure and three-months follow-up.

A 21-year-old female was referred to the clinic by a general dentist with a chief complaint of prior severe, constant, dull, throbbing pain causing headaches. After temporary restoration placement and a course of oral antibiotics, the pain had resolved. The patient’s medical history was non-contributory. Extraoral examination was within normal limits. Intraoral examination found no swelling or sinus tracts. Oral hygiene was fair. On clinical examination, the left maxillary first molar (#14) was found to have large occlusolingual caries under a temporary restoration. The tooth did not respond to Endo-Ice® (Coltene®/ Whaledent, Cuyahoga Falls, OH) and tested normally to percussion, palpation, mobility, periodontal probing, and bite testing. Radiographic examination showed tooth #14 with a periapical radiolucency, deep carious lesion closely approximating the dental pulp, a pulp chamber reduced in size, and multiple pulp stones (Figures 1a and 1b). Based on clinical and radiographic findings, the diagnosis of pulpal necrosis and asymptomatic apical periodontitis was made. Prognosis for tooth #14 was fair. Root canal treatment was recommended in an attempt to save the tooth, and the patient consented. The patient was anesthetized locally with 4% articaine (72 mg) with 1:100,000 epinephrine and 2% lidocaine (36 mg) with 1:100,000 epinephrine via buccal and lingual infiltrations. The tooth was isolated with a dental dam. All treatment was completed under high power magnification with a dental operating microscope and LED illumination. Caries were excavated into the pulp and complete removal was confirmed with caries indicator dye. Coronal tooth structure was restored with bonded micro-hybrid composite. The tooth was conservatively accessed with removal of all pulp horns, ledges and overhangs. Examination of the pulp chamber floor revealed four distinct canal orifices. To maximize preservation of tooth structure, orifice shapers were not utilized during the instrumentation process. Sodium hypochlorite irrigation (0.5%) was employed merely for lubrication and to assist in the prevention of microbial transfer to extra-radicular tissue during shaping [14,15]. Working lengths were estimated with an electronic apex locator (Root ZX II, J. Morita, Irvine, CA). Glide paths were created with K-files up to size #20. Rotary instrumentation, up to an apical size #20, was utilized to minimally shape the canals to create a path for irrigation to reach the apex and to facilitate the placement of root canal filling. The GentleWave Procedure was completed to deliver activated distilled water, sodium hypochlorite and ethylenediaminetetraacetic acid (EDTA) throughout the root canal system. Canals were dried using a combination of 100% ethanol irrigation, micro-suction tips, and paper points.

After the GentleWave Procedure, a fifth canal orifice in the apical third of the palatal root was detected. This canal was not previously realized or instrumented but now appeared free of debris and tissue. The fifth canal was fitted for root canal filling and confirmed by radiograph. All five canals were obturated with gutta-percha by warm vertical condensation and thermo-plasticized gutta-percha backfill. The canal orifices and access cavity were sealed with bonded composite. A high-resolution CBCT scan with a focused field of view was acquired post-operatively to better visualize the obturation of all root canal systems and rule out complications (Carestream 8100 3D, Carestream Health, Inc. Rochester, NY). The post-operative CBCT scan further demonstrates the complicated anatomy and five canals (Figures 2a-2d). The mesiobuccal root canal systems were noted to have type XVI anatomy, originating at two separate orifices but diverging into 3 apical exits [17]. 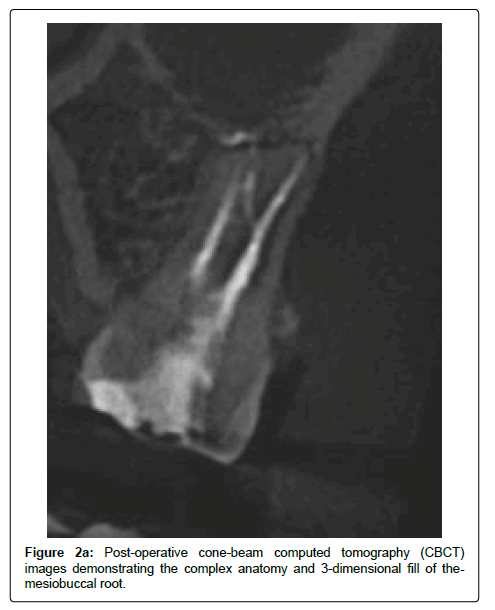 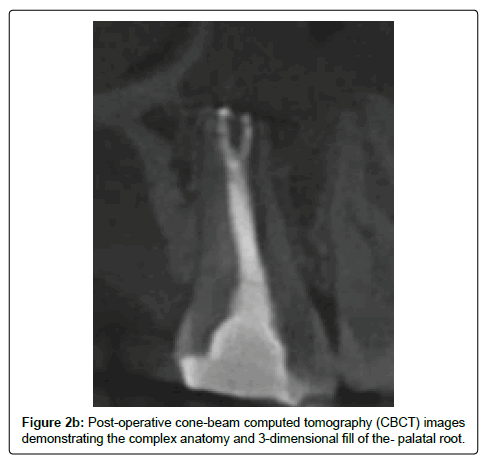 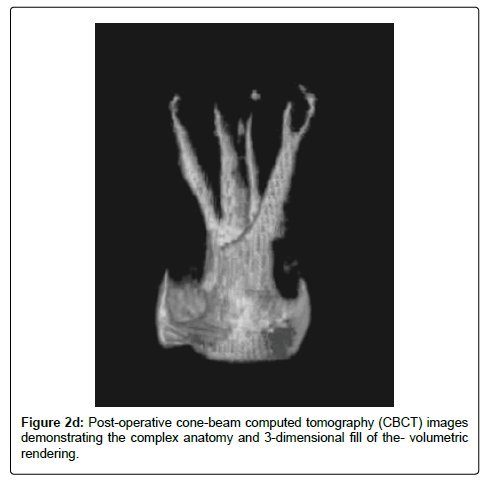 The patient was advised to obtain a crown restoration from their general dentist and an endodontic follow-up evaluation was scheduled three-months post-procedure to monitor healing. At the three-month follow-up visit, the patient was asymptomatic and reported no pain or clinical symptoms. Tooth #14 was in function with a crown restoration and intact margins. Three-month follow-up radiographs show a healed tooth with no periapical radiolucency (Figures 1e and 1f). The patient reported a subsequent move out of state and therefore would be unavailable for further follow-up evaluations. The patient was advised to continue comprehensive dental care with a general dentist.

The presence of four root canal systems in maxillary molars has been well-documented, usually with two canals in the mesiobuccal root [2,18], but the presence of five root canal systems is quite rare [8]. A review of published case reports shows that the majority of palatal roots contain a single root canal system, but 1.2-3.4% of maxillary molars contain two palatal root canal systems [7,8]. In this case, the second palatal canal was not visualized during instrumentation. Conventional root canal treatment might have resulted in the inability of irrigants to reach within the un-instrumented canal, the inability of sealer or guttapercha to fill the un-instrumented canal, and possibly the persistence of a bacterial reservoir in the uninstrumented canal, which may have compromised the outcome. However, in this case the previously undetected canal was cleaned during the GentleWave Procedure allowing it to be visualized, dried, and filled with gutta-percha and sealer, leading to the complete resolution of the patient’s symptoms and healing by three months of the treatment.

The successful outcome of this case is consistent with previously published clinical studies for the GentleWave System in which molars treated with the GentleWave Procedure healed rapidly with high success rates [10,11]. The presence of sealer puffs at the mesiobuccal and palatal apices suggests the lack of an apical plug of debris and is consistent with a recent study that found significantly less debris in the middle and apical thirds of the root canals after the GentleWave Procedure as compared with conventional root canal treatment [9].

Packed debris in the canals, particularly in the apical third and in complex anatomy, is often seen after conventional instrumentation and inhibits irrigation fluids from reaching the entire root canal system [19,20]. Studies have shown that conventional instrumentation to a minimum size #30 or #35 is required for endodontic irrigating needles to reach the apical third [20]. In this case, instrumentation did not involve coronal flaring or orifice openers and was kept minimal at an apical size #20, consistent with clinical and in vitro studies, to preserve tooth structure, maintain root dentin thickness, and stay natural to the canal anatomy, while still removing apical debris through Multisonic Ultracleaning with the GentleWave System [9-11]. Molina et al. showed that GentleWave System could remove debris from canals and isthmi in the apical third of the root canal system even at smaller file sizes of 15.04 [9]. Identification and cleaning of all canals and complexities of the root canal system utilizing the GentleWave technology may reduce the chance for retreatments and extractions and increase the successful outcome of root canal treatment [10,11].

This case demonstrates the successful endodontic management of a rare case of a maxillary molar with 5 canals, one of which was uninstrumented after root canal treatment utilizing the GentleWave Procedure. Clinicians should be aware of potential encountered anatomical complexities that, if left untreated, could compromise outcomes.