Copyright: ©2017 Aimakov OA, et al. This is an open-access article distributed under the terms of the Creative Commons Attribution License, which permits unrestricted use, distribution, and reproduction in any medium, provided the original author and source are credited.

The chemistry of phospholanes gained broad development first of all due to their many useful properties as the intermediate readily available monomeric substances with functional groups and various heteroatoms and also having particular biological properties [1,2]. Phospholane cycle is a part of the biologically active synthetic material. In addition, it is a structural basis of many antimicrobic tools, thus researchers are interested in these systems [3-5].

With the purpose of obtaining new 1,3,2-dioxoazaphospholanes, the following compounds are used as starting reagents: ethylene glycol, phosphorus trichloride, alcohols, monoethanol amine vinyl ether. These substances are readily available monomers of chemical production. They are not waste products, but are monomers for obtaining different chemicals. The novelty of this work is that in order to obtain new phospholanes for the first time we used vinyl monoethanol amine ether. For the first time we obtained 1,3,2-dioxoazophospholanes.

The aim of this work was to develop preparative aspects of the formation reactions of phospholane series compounds at interaction of chlorine-containing phospholanes with monoethanolamine vinyl ether, which would extend preparative capabilities using a known method and obtain previously unknown 1,3,2-dioxoazaphospholanes. Chlorides of ethyleneglycolphosphorus acid were taken as initial reagents. They were obtained by phosphorylation of ethylene glycol by means of phosphorus trichloride according to the scheme:

In the series of phosphorous organic compounds, 1,3,2-dioxoazaphospholanes have a huge potential as a synthetic materials, and are interesting objects to study different types of biological activities.

In the course of the experiment, we have successively obtained the compounds indicated in the article.

The purity of the compounds and the reactions were monitored by TLC on Silufol UV 254 plates in specified eluents systems. The manifestation was carried out with iodine vapor.

50 ml of anhydrous ether, 9.3 g of ethylene glycol and 22.0 g of pyridine were placed in the reaction flask. 20.62 g of phosphorus trichloride was added to the reaction mixture with stirring at a temperature of -16 to -17º?. After the addition of phosphorus trichloride at room temperature, the solution was left with stirring for about 1.5 h. During the reaction, the pyridine hydrochloride formed. The ether solution of 2-chloro-1,3,2-dioxaphospholane was isolated by filtration. Further desired product 2-chloro-1,3,2-dioxaphospholane was obtained by simple distillation. Boiling point=56ºC, 1.4917; Molecular Weight=126.49; Gross formula: ?2?4??2?l.

The foundation of researches in the field of 1,3,2-dyoxaphospholane is laid in Arbuzov and Kabachnik’s works [6,7].

In order to obtain polyfunctional derivatives of phosphorous acid diols, in our investigations we used the chemical monomer of series of amino alcohols vinyl ethers-monoethanolamine vinyl ether. Due to the presence of amino- and vinyloxy groups these compounds have a great synthetic potential of amines and vinyl ethers. Vinyl ethers and their derivatives are of great interest as monomers for synthesis of polyfunctional compounds, which are widely used as chemotherapeutic drugs, polymer materials, pesticides, plant growth stimulators.

Due to our research interests in the field of organophosphorus compounds chemistry [8-10], we conducted the reaction of N-vinyloxiethyl-1,2,3-dioxaphospholane with elemental sulfur, which resulted in the corresponding synthesized thiophospholane:

Reactions of alkylation and acylation were carried out in order to elucidate the reactivity of synthesized 1,3,2-dioxathio-phospholanes. As a result, the corresponding alkyl and acyl derivatives of phospholanes were obtained: 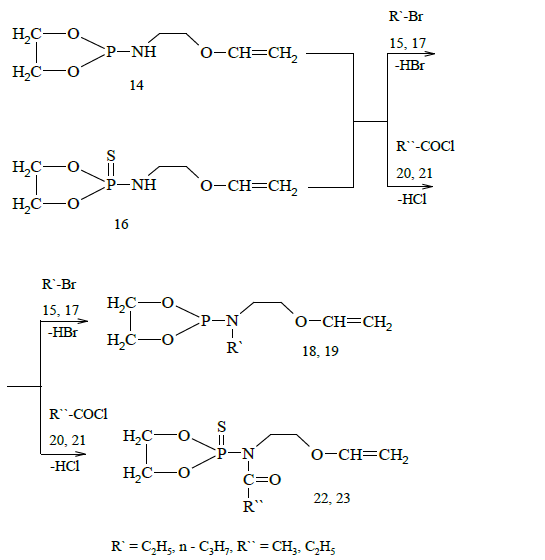 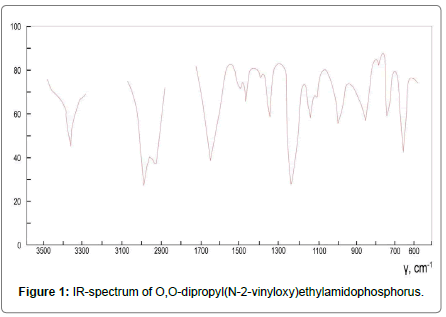 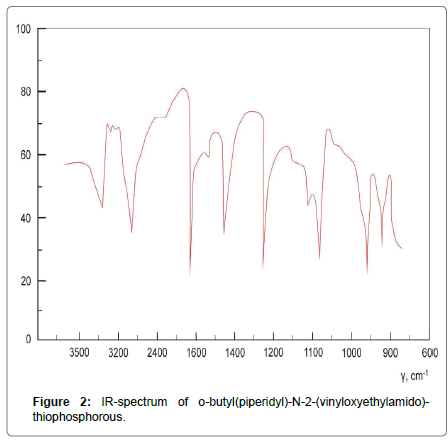 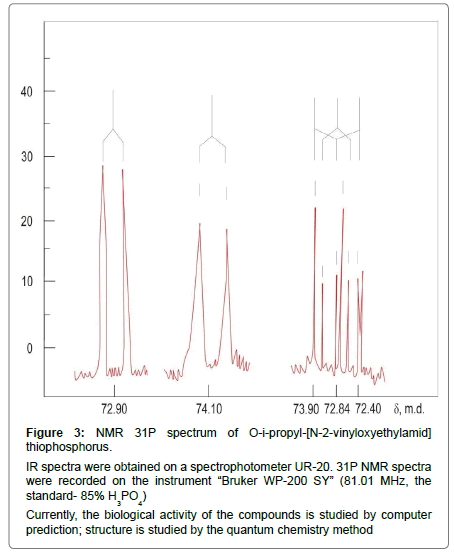 Figure 3: NMR 31P spectrum of O-i-propyl-[N-2-vinyloxyethylamid] thiophosphorus. IR spectra were obtained on a spectrophotometer UR-20. 31P NMR spectra were recorded on the instrument â€śBruker WP-200 SYâ€ť (81.01 MHz, the standard- 85% H3PO4) Currently, the biological activity of the compounds is studied by computer prediction; structure is studied by the quantum chemistry method.

The importance from the theoretical point of view of the amino derivatives of cyclic phospholanes are promising chemical monomers. Since the molecule contains vinyloxy and a secondary amine group. 1,3,2-dioxoazophospholanes form a class of biologically active substances and can have antibacterial properties.