A Case Study on Application of the Theory of Planned Behaviour:Predicting Physical Activity of Adolescents in Hong Kong

Copyright: © 2013 Mok WK, et al. This is an open-access article distributed under the terms of the Creative Commons Attribution License, which permits unrestricted use, distribution, and reproduction in any medium, provided the original author and source are credited.

It is well-known that regular physical activity brings many health benefits. It not only helps to improve body fitness, but also prevents chronic diseases, relieves pressure and extends social network [1-3]. According to World Health Organization [4], inadequate physical activity ranked the fourth leading cause of global mortality. Diseases caused by lacking physical activity were reported that have contributed to 6% of global mortality rate. For the sake of society, regular physical activity was suggested to be essential to improve public health and relieve financial burden on public medical expenditure indirectly [5,6]. A study estimated that the social costs expensed on each citizen due to physical inactivity could be up to €150-300 each year in Switzerland and the United Kingdom [7].

TPB is a model generated from the Theory of Reasoned Action (TRA) [15], which assumes that the specific behaviour is determined by intention to perform it [22]. The model extended the TRA by supplementing the perceived behavioural control (PBC) because TRA experiences difficulty in explaining behaviours in which a person does not have volitional control over it. Armitage and Conner made an excellent review on TPB [19]. Basically, there are three antecedents of behavioural intention, which are attitude, subjective norm and PBC. Figure 1 shows the detail of TPB model. 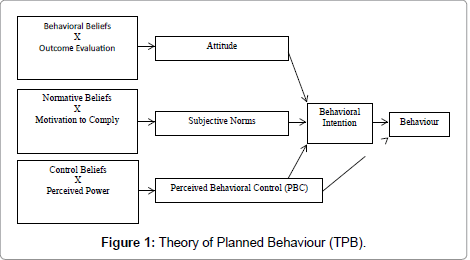 Behavioural intention is the measure of an individual’s willingness to perform a desired behaviour. Based on the rationale of TPB model, behavioural intention is a proximal predictor of behaviour [15]. The higher behavioural intention is towards a specific behaviour, the more likely is that the person engaged in that behaviour. Attitude is the measures of the salient behavioural beliefs. It is the function of an individual who perceived the likelihood of outcome due to performing a behaviour and individual’s evaluation of that outcome [23]. Fishbein and Ajzen suggested that attitude could be classified into affective (e.g. unpleasant / pleasant etc.) and instrumental elements (e.g. harmful / beneficial) [22]. Subjective norm measures the effect of social influence exerted on individuals. It is the perception that individuals perceived the pressure whether they perform or not a specific behaviour [15]. Some studies suggested that subjective norm in predicting physical activity was a rather weak predictor. Subjective norm was less significant in predicting physical activity in adults. However, teenagers were more subject to significant others such as peer and parents [24]. PBC is the measure of ‘people’s perception of the ease and difficulty of performing the behaviour of interest’ [15]. The extent that individuals could successfully transform their behavioural intention into actual behaviour greatly depends on their volitional control over that behaviour. Because of the higher control on behaviour, the intention on preforming behaviour would be higher [22]. Measures of PBC reflected an individual’s control over a specific behaviour.

The current research was carried out during the 2011-2012 academic year. One secondary school in Hong Kong was selected to participate in this case study. With response rate of 60.5%, there were in total 486 (250 male and 236 female) participants enrolled out of 803 invitations, ranging in age from 11 to 18 years. All of participants were Chinese. Data was taken from the corresponding students from Form 1 to Form 5 with the help of class teachers.

All subjects participated voluntarily. Test would be conducted only after having the oral consent of corresponding participant. Ethical requirements for the collection of personal data of the Institute of Vocational Education were strictly followed.

Questionnaire, consisting of three parts, was employed as a mean to measure students’ behaviour. The basic demographic information included gender, height, weight, health status was measured in the first part. In the second and third part, physical activity behaviour and TPB variables were measured accordingly.

Regarding the TPB variables, all items were measured by using 7 point Likert Scale. The questionnaire items were adapted from a measure used previously by Yu and Chen [32,33]. The items extracted from these studies were pretested and the internal reliability, Cronbach’s α, was over 0.70.

Attitude was measured by semantic differential bipolar scale, scoring from -3 to +3. There are in total five items. The format of the questions is ‘For me to do ‘regular physical exercise’ is …..’ Bipolar adjective was used for scoring (e.g. harmful/beneficial, worthless/ valuable, unimportant/important and etc.). Attitude towards regular physical activity was measured by taking the mean scores. The internal reliability of these five items was satisfactory (Cronbach’s α=0.93).

It consisted of two questions. Subjective norms items scored from -3 to +3. An example question was ‘Most people who are important to me would support if I intend to do regular exercise in the forthcoming month.’ The scale displayed an acceptable degree of internal consistency (Cronbach’s α=0.89). The mean scores of subjective norm items were used.

It consisted of three questions. The sample question is ‘I would insist on taking regular exercise in the forthcoming month no matter I meet any obstacles.’ PBC was measured by using unipolar scale, scoring from +1 to +7. Internal consistency for this section was acceptable and good enough for analysis (Cronbach’s α=0.89).

Three questions were used to measure behavioural intention. Unipolar scale was used, which it scored from +1 to +7. Questions of whether ‘I plan’, ‘I try’ and ‘I intend’ to do ‘regular exercise’ in the forthcoming month’ were asked. Cronbach’s α for this section was 0.926 and displayed a high degree of internal consistency. The mean scores were used for analysing.

Nearly 60% and 50% of students exercised less than 3 times per week and 30 minutes at each section respectively. By conducting crosstabulation, about 75% (369 out of 486 students) of students did not meet the standard of the physical activity guideline recommended by the Leisure and Cultural Services Department in Hong Kong (30 minutes per session and at least 3 times a week). Worst still, around 17% of students did not do any physical activity within the recent month.

Descriptive statistics and bivariate correlations for the variables of interest are shown in Table 3.

Table 3: Descriptive statistics for TPB with inter-correlation between measures (n=486).

In this case study, it gave a snapshot of the physical activity situation amongst secondary school students in Hong Kong. The results showed that about 70% of the subjects did not have adequate physical activity, and around 17% of them even did not take any exercise. These results are similar to the data from government [9].

Boys had more frequent and longer exercise duration per week than those of girls. The results are in line with the majority of studies [34-36]. According to the work of Sherar et al., the differences in the physical activity behaviour (including frequency and duration) were the results of maturity difference between boys and girls [37]. Boys have a later development of maturity during adolescent period and tend to be more sophisticated in engaging in physical activity. These explain why boys are more active than girls, and eventually spend more time in participating sports. As actively participation in exercising would enhance the exercise skills, boys are generally more competence in doing exercise [38]. The competency was reflected by higher PBC scores and in turns enhanced the exercise intention.

Students who perceived themselves with a good health status generally had higher scores in physical activity, behavioural intention and PBC than those who were with bad health status. The results are well matched with the fact that regular exercise is associated with physical and mental health benefits [39,40].

PBC showed a strong correlation with physical activity intention which corresponded to over 50% of variance of prediction towards intention. It indicated that PBC was the dominant factor towards physical activity intention. With regards to the regression analysis, attitude paid an insignificant role in predicting behavioural intention, while PBC was the dominant factor. The results are consistent with some previous studies, where PBC was one of the most predictable factors [41,42]. According to the results of Lazuras et al. 254 Greek secondary school students were studied, the data further indicated that PBC contributed most to the prediction of behavioural intention, where attitude did not [43]. The findings initiate to rethink the current physical activity promotion programme for school students.

Subjective norm was a moderate predictor of behavioural intention in the present study. A number of studies have shown that subjective norm is a less significant predictor of behavioural intention in the TPB model for adolescent [20]. The importance of subjective norm to intention may vary and diminish as age increases. Subjective norm is more predictive towards exercise intention for teenagers, who are susceptible to peer pressure or influence by parents (significant others) easily [24]. The efficacy in prediction may be due to age, experience and cultural difference. According to the report conducted by Department of Health [11], parents posed significant influence on childhood and adolescent in exercising. This showed that children and teenagers tend to be more active if their parents are following active lifestyle. In addition, peer influence may be another factor for engaging students in exercise. In present study, the most popular exercise companion was found to be friends and schoolmates. These evidences provide possible explanations that subjective norm is a moderate predictor for physical activity intention of students in Hong Kong.

The results of this study further confirmed that the physical inactivity situation amongst secondary school students in Hong Kong, about 70% adolescents was lack of exercise [11]. Boys were found to be more active in engaging exercise than girls significantly. In addition, TPB model was tested to predict physical activity intention and behaviour of secondary school students. The results were positive and gave evidences that TPB could be a useful tool to evaluate physical activity amongst adolescents in Hong Kong. In respect of TPB variables, PBC and past behaviour played a significant role in predicting behavioural intention and future behaviour, whereas, attitude was less significant. It requests public health practitioners to rethink the current health promotion strategies amongst adolescents in Hong Kong. Campaigns or advertisements promoting leisure-time physical activity amongst adolescent group always focus on changing the attitude of audiences by conveying information of health benefits [46]; however, it may be the least significant predictor amongst TPB variables [43].

Some limitations in the present study should be acknowledged. First, the sample size of this work was limited to one secondary school (Form 1 to Form 5), it may not reflect the true picture of physical activity behaviour of secondary school students in Hong Kong. Second, all data were from self-report, which is subject to both random and systematic bias [47]. Third, as the questionnaire survey was taken between January and March, quite close to examination period, the level of past behaviour of students may be underestimated.

Thanks to the Department of Applied Science of Institute of Vocational Education for facilitating the provision of the analysis instruments of this study.