Delay in Diagnosis of Pulmonary Tuberculosis among Presumptive Tuberculosis Cases in Parts of Anambra State, Nigeria

Nwachukwu O Ndubuisi1*, Ogodo A Chibuike2, Ulasi A Esther3, and Okoronkwo U Christopher1

Copyright: © 2016 Ndubuisi NO, et al. This is an open-access article distributed under the terms of the Creative Commons Attribution License, which permits unrestricted use, distribution, and reproduction in any medium, provided the original author and source are credited.

Methods: One thousand four hundred and eight seven presumptive tuberculosis cases participated in this cross-sectional study. Participants age ranged from 15 years and above; 661 (44.5%) were males and 826 (55.5%) were females. Diagnosis of pulmonary tuberculosis was based on National Tuberculosis Guidelines; using smear microscopy (ZN technique) and grading according to recent WHO policy where smears with>1 acid fast bacilli/100 high power fields was considered positive. Questionnaires were administered to patients to identify reasons for delay in diagnosing pulmonary tuberculosis.

Conclusion: There was a considerably long patient delay in diagnosing pulmonary tuberculosis. The reasons for the delay include ignorance and misconception on the part of the patients and their belief in the efficacy of prayer house healing. Reducing the delay will require health education on the importance of early diagnosis of pulmonary tuberculosis following onset of symptoms.

Many people with pulmonary tuberculosis (PTB) first consider other approaches before consulting a healthcare facility. Pulmonary tuberculosis continues to increase due to late patient presentation [1]. It has been reported [2] that most WHO regions, especially Africa, are far from the trend required to reach the long term rates of eliminating tuberculosis (defined as less than 1 incident case of Tuberculosis per 1million population by 2050).

Early detection and treatment is therefore essential to meet the goals of tuberculosis control and elimination. Any delay in diagnosis and consequently treatment of pulmonary tuberculosis patients (the most infectious form of tuberculosis), not only increase infectivity in the community but may also worsen the disease state and enhance the risk of death [3].

It is estimated [4] that a single infectious person, who remains un-treated, can infect between 10 and 15 persons every year, spreading the infection in the community.

A number of studies [7-10] have identified delays in diagnosing tuberculosis in low and high prevalent countries to vary significantly from 45 days to 91days. Other studies [11,12] have addressed the factors that affect health seeking in different socio-cultural milleus. Poor perception of health problems, distance, and cost of care have been reported as reasons for delay in seeking care among tuberculosis patients in many parts of the world. Understanding the reasons for delay in diagnosis and consequently treatment of pulmonary tuberculosis patients will help to develop new methods to reduce this delay and ultimately improve tuberculosis control. The purpose of this study was to assess delay in diagnosis of pulmonary tuberculosis and identify reasons for the delay.

NAUTH is the largest tertiary hospital and referral centre in Anambra State. SCBH is a foremost mission hospital with modern equipment. Both facilities are integrated with the National Tuberculosis and Leprosy Control Programme (NTBLCP) and provide free anti-tuberculosis medicines and services to the public.

Diagnosis of pulmonary tuberculosis was based on the National Tuberculosis Guidelines. Each presumptive tuberculosis case submitted two sputum specimens on the spot, within an hour interval. Sputum smears (2 cm × 1 cm) were made on clean, grease-free slides and stained using Ziehl-Neelsen technique. All stained smears were read at 1000x magnification and graded according to the recent WHO policy [13]; all smears with 1 or more acid fast bacilli/100 high power fields were considered positive.

A pre-tested questionnaire was used to collect patient’s data relating to symptoms of pulmonary tuberculosis, age and gender. Patients were asked to estimate the time (in days) from onset of first symptoms to first contact with a health provider for diagnosis. Questions were asked about reasons why seeking diagnosis may be delayed. Presentation to a health facility for diagnosis after 30 days of onset of symptoms was classified as patient delay [14,15].

The study was approved by ethical committees of both hospitals. Each patient was informed about the objectives of the study and his/her right to withdraw at any time from the study without any repercussions. All patients consented to participate in the study. 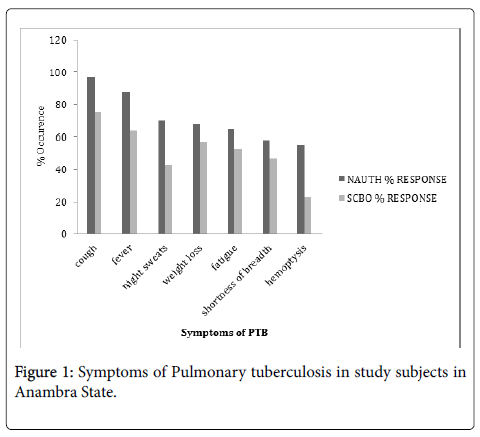 Majority of the presumptive tuberculosis cases (56.1%) delayed diagnosis within 60 days while 4.3% (64) cases delayed going for diagnosis for>90 days. The longest patient day was 186 days and the minimum period of days before diagnosis was 14 days following symptoms (not shown in Table 2).

Reasons for delay in seeking diagnosis from TB/directly observed treatment centre was mainly because most respondents (41.5%) thought the cause of pulmonary tuberculosis could not be diagnosed in a health facility. Other important reasons for the delay include poor knowledge of what pulmonary tuberculosis is (20.5%) and where they went (prayer houses) for healing as presented in Table 3. Fear of stigmatization ranked low (3.8%) as a reason for delayed diagnosis.

Table 3: Reasons for delay in diagnosis of pulmonary tuberculosis in Anambra State, Nigeria

Despite a high prevalence (12.3%) of pulmonary tuberculosis observed, 75.2% presumptive tuberculosis cases in our study had diagnosis delayed by more than 30 days. This finding is similar to a previous study in Lagos, Nigeria [1] where patient delay was observed in more than 80% of patients. Other workers have reported patients delay of more than 30 days in pastoralist communities, Ethiopia and Nepal respectively [18,19]. On the contrary, previous studies in Ethiopia [3,15], Chad [7] and Indonesia [8] reported that majority of participants in their studies presented to medical providers within 30 days following onset of symptoms.

The longest patient delay in this study was 186 days and the minimum period of delay before seeking care was 14days. Two weeks is generally the timeline recommended by Nigeria Tuberculosis Control Programme for a patient with cough to visit a health facility. This long patient delay can reflect poor patient’s knowledge and awareness of TB symptoms and the need for prompt consultation with healthcare services for diagnosis and initiation of treatment. However, 24.8% of patients consulted a healthcare provider for diagnosis within 30days compared to 70% reported in Kampala, Uganda [20].

The main symptoms that the respondents presented with were cough, fever, night sweat and weight loss. This was not a surprise because the lungs are primarily involved in pulmonary tuberculosis cases.

It has been shown [21] that focusing on cough as the determining symptom were sufficient. In other studies [22,23], cough especially, chronic cough, is observed as a cause of late presentation of patients to the health system.

One of the major reasons by respondents for delayed diagnosis of pulmonary tuberculosis is lack of knowledge that diagnosis could be made in orthodox health facility. This may reflect lack of awareness of free tuberculosis diagnosis and treatment services as respondents hoped to receive cheaper services at traditional healers This finding is in line with the observation [24] that delay in seeking help at DOTS clinic was attributed to ignorance and misconceptions on the part of patients.

A total of 305(20.5%) presumptive tuberculosis cases delayed diagnosis due to poor knowledge of the cause, means of spread, prevention and treatment of pulmonary tuberculosis. This is in agreement with previous studies in Ethiopia and Pakistan [25-27], respectively. Khan et al. noted that poor awareness regarding etiology of tuberculosis disease might have a negative impact on patient attitudes towards health seeking behavior and preventive methods, as most people with such beliefs may not visit health facilities. The poor knowledge about tuberculosis we observed in this study is in contract to 64.7% observed in Akwa Ibom State, Nigeria. The difference was that an earlier educational intervention carried out in Akwa Ibom State in 2006 created awareness of the disease and improved utilization of orthodox medical facilities of residents in 34 communities who had symptoms of tuberculosis.

Another important reason why diagnosis was delayed was belief of respondents on the efficacy of prayer houses for healing. Exactly 202 (13.6%) presumptive TB cases believed it. The inability of these spiritual healers to recognize pulmonary tuberculosis symptoms and to then, promptly refer the patient to a trained health professional for proper diagnosis could impact negatively on tuberculosis control. This is similar to an earlier [28] observation.

Other reasons that contributed to delay in seeking early diagnosis for pulmonary tuberculosis in health facilities include thoughts of symptoms as spiritual attack, first applying native herbs for cure and not knowing where to go for diagnosis.

Fear of stigmatization ranked low in this study unlike studies carried out in Afghanistan [29] Nepal [30] and Ghana [31] where stigma was independently associated with prolonged patient delay.

There was a considerably long delay in diagnosing pulmonary tuberculosis. Majority (75.2%) of presumptive tuberculosis cases delayed diagnosis by more than 30 days following onset of symptoms.

Reducing the delays will require health education on the importance of early diagnosis of pulmonary tuberculosis following the onset of symptoms.

We do not have any conflict of interest to declare.