Differences, Correlation of Compositions, Taste and Texture Characteristics of Rice from Heilongjiang China

Copyright: © 2017 Chen F, et al. This is an open-access article distributed under the terms of the Creative Commons Attribution License, which permits unrestricted use, distribution, and reproduction in any medium, provided the original author and source are credited.

In 2014, China produced 607 million MTs of grain. However rice is one of the most popular staple foods, and today half of the world population are living depend on it in Asia, Southern Europe, tropical America and some parts of Africa, and the total production is ranked 3 among the world's total crop yields [1,2]. The area of Heilongjiang is located in the center of the northeastern Asia economic zone, which is one of the three world famous black soil zone [3] and the rice produced from Heilongjiang is popular with acceptable quality. Although already in the market with good appearance in terms of surface (reflective and translucent), the rice fragrance and taste have some problems concerning sensory properties during consumption. So it is important to evaluate the composition characteristics of the different rice cultivated in the Heilongjiang area in order to assess composition effects on sensorial and textural quality.

The chemical composition of rice determines its nutritional value and sensory properties such as taste and texture [4,5]. Amylose content in the starch has been identified as one of the main composition components that affect its textural properties [6]. Moisture, protein and fat content also have some effects on perceived taste and hardness of rice when being consumed [7]. Parameters to assess the quality of starch have been largely discussed such as Xu-mei et al. [8] proposed that texture could be considered as one of the key parameters. However, in many cases the perceived texture is associated to taste, thus it would be important to relate textural and taste properties of rice and to evaluate how they are affected by the composition. This is an objective of interest in areas such as the Heilongjiang region where the production of rice has a large economic impact that has been negatively affected by the variable quality of the rice produced in the region. Guoxingfeng and Muyundong [9] determined the texture properties of rice after cooking from different regions using standard textural protocolsand the research indicated that there existed significant difference between hardness and viscosity through variance analysis. Lufeng et al. [10] measured the hardness, viscosity, springiness and chewiness of rice by Texture Analyzer. Similar research, Nithya et al. determined the influence of moisture content, particle size and level of cereal-pulse blend on the glass transition and melt temperatures of a ready to eat cereal-pulse formulation.

Given the economic importance of rice production in the Heilongjiang region and the rising concerns regarding quality in terms of sensorial properties it is important to evaluate the effect of composition on these properties and that was the main objective of the present research orientation. For that the chemical composition of 20 types of rice coming from this region was evaluated. The following properties of cooked rice were evaluated using Textural Profile Analysis (TPA) and sensory evaluation. Correlations among the chemical composition of the rice types and their mechanical and sensory properties were evaluated at the same time.

Rice was ground using a FZ102 roll mill and sieved using a 100 mesh screen. The moister content was between 12% and 14% by dry milling.

Texture index was measured by sensory method. The rice was steamed with rice cooker by a cup of sample and 2 cups of water for 30 minutes. Sensory attributes of the cooked rice sample were evaluated using a descriptive analysis method. Seven female and three male subjects who were non-trained panelists from the College of Food Technology at Harbin University of Commerce (Harbin, China) participated in the sensory evaluation. Grading rules are shown in Table 1. The evaluation was done in normal light conditions at room temperature. Samples were in the same container and coded randomly with 3-digit numbers (Table 1).

Texture Profile Analysis (TPA) was performed using a texture analyzer (TA-XT2i; Stable Microsystems, Surrey, UK) with a 5 kg load cell, fitted with a 50 mm diameter cylinder aluminum probe. Hardness, adhesiveness, springiness, cohesiveness and resilience were measured for all samples. Tweezers were used to pick up 10 grains of steamed rice from the middle of the container, and evenly placed them individually in the center of the platform area of round layer. Compression force was measured during the test, the pretest speed was 2.0 m/s, test speed 1.0 m/s, and after test speed was 1.0 m/s, a compression ratio 30% was used and the trigger force set to 1 g (Table 2).

Data analysis was conducted using the software program of Statistical Package for the Social Sciences (SPSS) and Excel 2003 17.0, in order to assess significant differences among samples. Differences were considered significant when p<0.05.

Amylose and protein not only are the most important nutrients of rice, but also are the significance factors affecting its qualities [11,12]. Chemical composition from different regions rice is shown in Figure 1. Results showed that in general rice from different regions had different moisture, fat, protein, ash, amylose and carbohydrates contents. Protein content ranged between 5.7~8.2%. Sample number 7, 6, 18, 14 and 8 had protein content higher than 8%. Fat content ranged between 0.3% and 1.1%, the lowest one was for sample 4 while the highest one was sample 6. Carbohydrate content ranged from 76.4% to 79.2%. The biggest one was for sample 12 and the smallest one was sample 6. 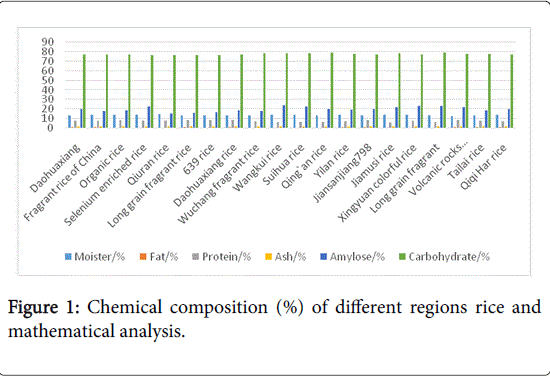 Amylose content of sample 5 Qiuran rice was the lowest of 14.93% and the highest level was sample16 of 23.81%. Difference of rice moisture content was smaller, between 12% and 14%, which is beneficial for rice storage. From the point of coefficient of variation, fat, amylose and protein content was larger, it could be explained that though these composition in the total proportion did not take the most, they were likely to affect the eating and processing quality of rice.

As shown in Figure 2 the texture indicators of twenty kinds of cooking rice had no significant difference. There were five kinds of rice whose total score was beyond 24 points respectively which sample numbers are 9, 13, 14, 5 and 8. The highest one was sample 13, whose taste was the best. There were fourteen kinds of rice whose total score was between 21 and 24 points, including sample number 20, 2, 6, 16, 3, 10, 4 and 1. From the point of view of several sensory indicators, their texture was better, and only 1sample 1 scored about 20 points whose taste was poor. These differences may be due to genetic differences, breeding method, variety, growth environment, geographical conditions and cultivation [13]. So in order to describe the relationship between taste indexes and major chemical components of different regions rice scientifically and accurately, it is necessary to analysis the differences between them. 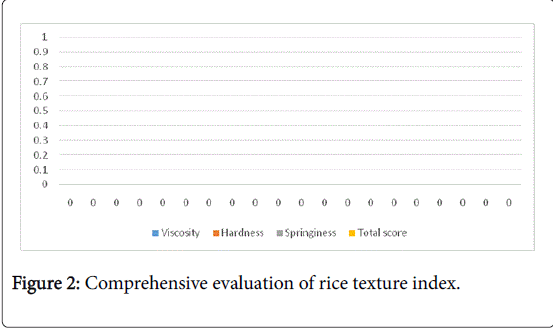 It might be because that higher protein content meant more closely grain structure and smaller space between the starch grains which made water absorption slow and little, so inhibited starch gelatinization and expansion, and more water and time were needed for cooking which made rice hard and loose and had low viscosity [17]. (3) The ash content of rice was negatively correlated with its adhesion, and positively correlated with hardness, springiness and other indicators, but not obvious. (4) The hardness, cohesiveness, gumminess and resilience of rice were positively correlated with its amylose content. It is due to that in the heating process of the rice starch grains rupture and amylose dissociates out from starch grains to form three-dimensional matrix structure, the starch grains embedding inside. More amylose content [18], more closely matrix structure and more difficult to be destroyed, which cause the rheological properties to worse, and hardness, cohesiveness and gumminess increasing [19] (Table 4).

This research was supported by State Research and Development Major Project of Application Technology funded by Office of Science and Technology of Heilongjiang China.