Copyright: © 2014 Mahmoud M, et al. This is an open-access article distributed under the terms of the Creative Commons Attribution License, which permits unrestricted use, distribution, and reproduction in any medium, provided the original author and source are credited.

Purpose: To evaluate the endovascular treatment offered in our institution for five cases harboring infective cerebral aneurysms. The technique and clinical evolution are described.

Material and methods: Five patients’ four men and a woman have been referred to our institution for endovascular treatment of infective cerebral aneurysms. Age ranged from 19 to 45. Three patients presented with intra parenchymal hemorrhage, one patient presented with SAH and parenchymal hemorrhage, one patient presented with bilateral cortical blindness. Three patients have been followed up, clinically (2patients) and clinically/ radiological (1 patient), for a duration of 2 months to 13 months. The aneurysm was located in the distal MCA in four patients and distal PCA in one patient. Their blood cultures were positive for staphylococci, streptococci and aspergillosis. Endovascular treatment was targeted to occlude the aneurysm as well as the parent artery using NBCA/lipiodol mixture. All patients received 4 weeks parental antibiotic according to blood culture.

Results: Endovascular occlusion of the aneurysm and the parent artery has been performed for four patients. One patient rebled before the endovascular treatment and died. One patient developed cerebral abscess which was surgically evacuated. Three patients have been discharged with no post intervention neurological consequences.

Conclusion: Endovascular occlusion of the infective cerebral aneurysm is efficient in terms of re bleeding prevention. Proper systemic antibiotic should be administered according to repeated culture to prevent local infection spread and abscess formation.

Infective aneurysms previously misnamed as mycotic aneurysm are rare lesions accounting for 0.7-6.5% of all cerebral aneurysms [1]. They affect the cerebral vessels from direct or systemic spread. Most common direct spread occurs from infected sinuses or meningitis. Systemic spread occurs due to underlying cause as endocarditis and valve vegetations or in immune compromised patients as those who underwent organ transplant surgery. The infective cerebral aneurysms are peculiar in their locations as they develop in distal arteries usually in the distal middle cerebral artery (MCA) or posterior cerebral artery (PCA). Their course is unpredictable they may regress, enlarge or develop de novo. They may disappear or progress on antibiotic therapy [2]. Infective cerebral aneurysms and notably those of fungal origin carry high risk of morbidity and mortality which could reach 90% [3]. The aim of this series was to evaluate our experience in endovascular treatment of infective cerebral aneurysms describing the technique and the outcome of the treatment offered in our institution.

Five patients (four men and one women), age ranged between19-45 were referred to our institution between October 2008 and May 2013.

Four patients presented with intra parenchymal hemorrhage in the temporal parietal region with subarachnoid extension in one patient. One patient presented with cortical blindness. The GCS ranged from 15 to 12. In view of the peculiar site of hemorrhage and location of the aneurysm proved by a multi detector 64 slices CT exam, the suspicion was raised for the possibility of infective aneurysm. Blood culture has been performed for all patients in the first 24 hours and was positive in four patients. Imperial Penicellin G and Gentamycin parental antibiotic were administered from the first day of admission then the antibiotic was then tailored according to the blood culture result. Neurological examination revealed mild hemiparesis in one patient, receptive dysphasia in two patients and bilateral cortical blindness in one patient. Patients and aneurysms demography are summarized in Table 1.

The endovascular treatment has been performed or has been intended to be performed between 24 to 48 hours following admission for all patients except patient 1. Patient 1 presented with cortical blindness. In his MRA (Time of flight) exam, there was evident basilar stenosis yet the Rt PCA aneurysm was not diagnosed. He was then scheduled for basilar stinting after being prepared with dual anti platelet treatment. The aneurysm size ranged from 3-7 mm in maximum diameter. The aneurysm locations were in the distal angular artery [3], temper occipital artery [1], distal PCA [1].

All procedures were performed under general anesthesia. An Envoy 6F guiding catheter was used. An ultraflow microcatheter coupled with an expedion 0.010 micro wire (ev3 Endovascular, Inc. Plymouth, MN USA) were used to catheterize the aneurysm sac. NBCA/lipiodol (laboratories Guerbet, France) concentration used was 1:2. The aneurysm sac was filled with the embolising mixture together with parent artery occlusion. Distal retrograde filling of the occluded artery was observed in three cases. No post embolisation neurological events occurred in any patient.

For patient 1 (Figures 1A-1C), a coronary stent liberate 3×20 mm (Boston scientific corporation, USA) was used to dilate a stenosis at the mid basilar trunk. Reestablishment of good flow in the basilar trunk Following stinting demonstrated well the presence of a 5 mm fusi form aneurysm at the distal right P3 segment. 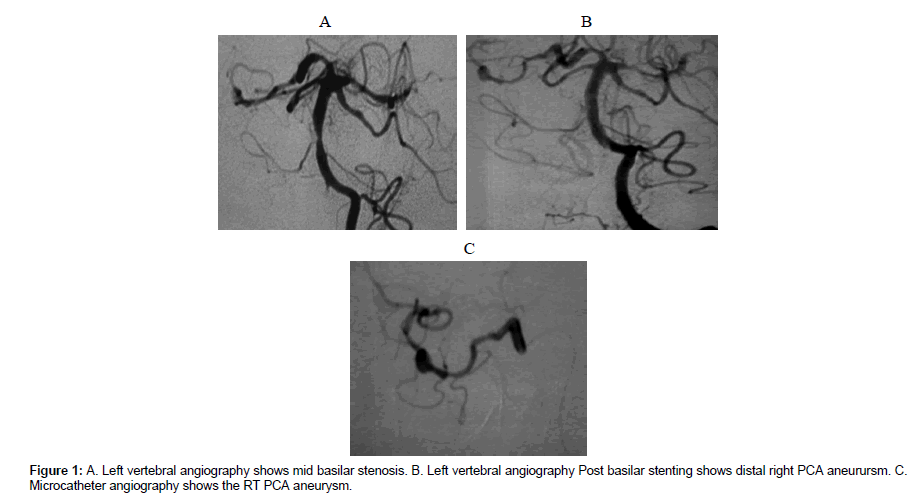 One patient died from massive re bleeding few hours before the procedure (patient2). Patient 3, morbidly obese, known to be uncontrolled diabetic had a negative blood culture at admission. The aneurysm was excluded 48 hours post admission and recovered with no neurological consequences. Despite negative blood culture and negative echocardiography findings, she received empirical IV Penicellin G and Gentamycin. She has been discharged at day 19post SAH with no neurological consequences complaining of mild to moderate headache. During her first hospital admission the follow up CT showed evolving edema around the hematoma. Three days post discharge she arrived to the ER with RT side hemiparesis, dysphasia yet she was alert oriented and executing commands. CT scan with and without IV contrast revealed abscess formation at the site of hematoma (Figure 2C). Another blood culture was done. She deteriorated progressively in the following 24 hours necessitating Emergent abscess evacuation. The pus and blood culture confirmed Aspergillosis infection for which parental fluconazole has been administered. Following surgical abscess evacuation she regained consciousness fully yet complained of RT side dense hemiplegia and dysphasia. During follow up period significant improvement was observed, the dysphasia remarkably improved, the RT side hemiplegia improved to Grade 3 motor power. The remainder of patients had no post intervention neurological consequences at discharge and during the follow up period.

Infective cerebral aneurysms result from invasion of the vessel wall by an organism, which leads to destruction of the elastic lamina with subsequent out pouching and aneurysm formation [4].

It carries a high incidence of rupture due to the necrotic impact on the vessel wall, its friability and the lack of identifiable neck [5].

Having a non predictable course together with the few numbers of patients published and the absence of a prospective randomized trials there is no standard regimen of management gathering the three treatment modalities (Antibiotic, surgical and endovascular) for the ruptured and non-ruptured aneurysms. Endovascular occlusion of the aneurysm with the presence of foreign body in an infected hematoma may favor local infection spread and abscess formation. The procedure was relatively lengthy 2 hours 52 minutes. The length of the procedure and ischemia increase the risk for infection according to Chen and colleagues as the later may cause damage to the blood brain barrier [6]. Despite this we did not consider the post intervention neurological complications, procedure related as she was not on the proper antibiotic. The first blood culture was negative and empirical antibiotics have been administered. Few reports described abscess formation following mycotic aneurysms. Sato et al described surgical treatment of mycotic aneurysm with brain abscess [7].

We did not use coils to embolise those aneurysms for two reasons first the theoretical higher wall friability and hence probable higher incidence of perforation. Second, the use of coils would not preserve the parent artery as all aneurysms included in this study lack identifiable neck.

The behavior and evolution of this aneurysm group is unpredictable. Even for un-ruptured infective aneurysms, endovascular treatment has been previously suggested by Chapot et al. [2] in their series with 18 infective aneurysms they had seven aneurysms which ruptured during the course of antibiotic treatment. Tunkel and Kaye stated that unruptured mycotic aneurysms have 30% mortality [9].

Ducruet et al. [4] in their comprehensive review including 287 patients with mycotic aneurysms stated that the risk of rupture remains high for unruptured infective aneurysms even during the course of proper antimicrobial treatment.

Surgery in the other way is not an easy decision, taking in consideration the distal location of the infective aneurysm, the friability of its wall, the usual lack of identifiable neck and the proximity to eloquent areas.

There were two striking findings in patient 1, which could be interpreted in the context of infective vasculitis. The cortical blindness probably occurred due to showering of septic emboli and subsequent distal arterial occlusion. DeLone et al. described the vasculopathy mediated septic infarctions which have specific predilection to perforating arteries territories but can affect non perforator’s territories as well [10]. The basilar trunk stenosis may be explained by an inflammatory reaction to the showered bacterial infection as classically, this type of vasculitis is characterized by polymorph nuclear cells infiltration of the media and adventitia with marked initial proliferation. Some can argue that it would be probably better in patient 1 to treat the aneurysm and the stenosis with parental antibiotics instead of proceeding to treat a stenosis whose nature was uncertain. However, the aneurysm was not evident in the MRA, it became well evident after establishing a good basilar flow post stinting. Of course we are still not sure of our interpretation that the whole process is of infective origin, as the stenosis could be of atherosclerotic orgin and the P3 aneurysm could be of dissecting origin. Chapot et al. [2] stated that in order to identify a distal cerebral aneurysm as of infective origin, two supporting criteria at least should be present 1- change in aneurysm size or morphology 2-the presence of another intra- or extra cranial mycotic aneurysm, 3- rupture of the aneurysm, 4-arterial occlusion or stenosis adjacent to the aneurysm, and 5- cerebral infarction due to arterial occlusion at the level of the aneurysm. In this case, we had two supporting elements from Chapot et al. [2] criteria, the presence of vascular infarct in the arterial territory harboring the aneurysm and the presence of arterial stenosis. If we add to this the location of the aneurysm and the presence of valvular vegetation by echocardiography as well as the young age of the patient, these are probably additional supporting data to our diagnosis. In such condition, we think that it would be better to treat the aneurysm only and leave the stenosis under parental antibiotic without stinting.

We are aware of the small sample of this study. We are also aware that absent procedure a related symptomatic complication does not exclude the possible occurrence of silent ischemic events. MRI follow up examination would have been of value in detecting such eventual asymptomatic lesions. To our knowledge this is the first study in the literature describing three major complications associated with infective cerebral aneurysm: abscess formation from local spread, vasculitis induced stenosis and distal septic infarctions.