Herpes Simplex Encephalitis in Young Children: A Report from Qatar

Copyright: © 2014 AL-Shami R, et al. This is an open-access article distributed under the terms of the Creative Commons Attribution License, which permits unrestricted use, distribution, and reproduction in any medium, provided the original author and source are credited.

Objectives: Infection of the Central Nervous System (CNS) is a life-threatening condition in children. Herpes Simplex Encephalitis (HSE) is one of the most common causes of sporadic encephalitis in children. Our objective is to report on seven consecutive patients with this condition detailing the clinical picture, radiological findings and outcome.

Methods: This was a retrospective report, all children presenting with HSV encephalitis to our tertiary Paediatric Neurology centre were included in the review.

Results: Seven children were admitted to our facility with confirmed herpes simplex encephalitis in the period between July2010 and July 2012. All seven patients had CSF pleocytosis (with lymphcyte predominance). Elevated CSF protein was found initially in three patients. Neuroimaging abnormalities were found in all patients. Five patients displayed temporal lobe abnormalities and two diffuse changes. Developmental delay occurred in four patients and seizures in two. One patient developed spastic paraplegia following a prolonged course of illness complicated by CNS demyelination. All patients were treated with IV Acyclovir. Infants under the age of one were less likely to develop neurological deficit or significant developmental delay than older children.

Conclusions: In our patients; infants had a much better outcome inspite of similar presentation and neuroimaging findings; this may well reflect brain plasticity in younger children.

Infection of the central nervous system (CNS) is a life-threatening condition in children. Many viruses and bacteria can cause CNS infection and the extent of infection ranges from diffuse involvement of the meninges, brain, and the spinal cord to a localized space-occupying lesion.

Herpes Simplex Virus (HSV) is one of the most common causes of sporadic encephalitis in children [1].

An Electroencephalogram (EEG) may aid the diagnosis, while brain imaging with Computed Tomography (CT) and Magnetic Resonance Imaging (MRI) is essential to evaluate the extent of brain injury and help exclude alternative diagnoses such as space occupying lesions, hemorrhage, acute demyelinating encephalomyelitis or sinus thrombosis.

We report 7 children admitted to our facility with herpes simplex encephalitis during the period from July 2010-July 2012. Their clinical presentation, laboratory results and neuro-imaging finding are detailed below:

An 8 months old girl presented with fever, listlessness, poor feeding and repeated focal seizures. Her seizures were described as eye blinking and mouth twitching with clonic movement of her arms followed by secondarily generalized tonic-clonic seizures. She was admitted in the PICU. HSV infection was proven by PCR.

She was treated with aciclovir for 3 weeks and discharged on Phenobarbitone. On follow up, she had no further seizures with good overall developmental progress (Figures 1A and B). 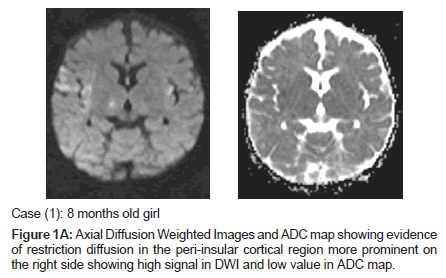 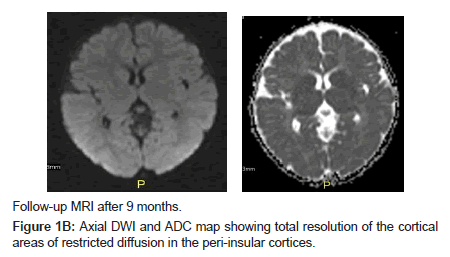 Follow-up MRI after 9 months.
Figure 1B: Axial DWI and ADC map showing total resolution of the cortical areas of restricted diffusion in the peri-insular cortices.

A 6 months old boy presented with high grade fever and recurrent seizures started as focal seizures with secondary generalization for more than 30 minutes.

He was treated with aciclovir for 3 weeks in the hospital and was discharged in a good general condition; at the age of 9 months he developed infantile spasms and responded to treatment. There were no developmental concerns (Figure 2). 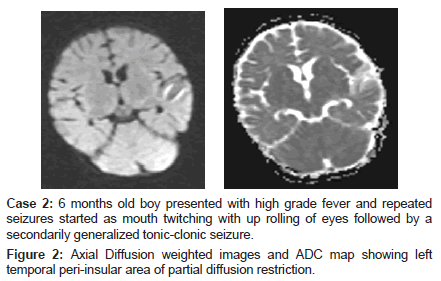 A 6 years old boy presented with fever, headache and neck stiffness, his CSF was positive for HSV, he had no seizures.

During hospitalization he developed lower limb weakness and urine retention with sensory loss in the lower limbs and was diagnosed with ADEM based on clinical findings and MRI scan findings showing widespread areas of high signal abnormality which was not present in the first MRI.

He was treated with aciclovir, methyl-predin0073olone and Intravenous Immunoglobulins. He remained with signs of spastic paraplegia throughout his recent follow up.

A 33 months old boy presented with fever and recurrent focal seizures. He was treated with aciclovir and showed some initial improvement. In the 3rd week he started to deteriorate with further seizures and deterioration in the level of consciousness. He started to have chorio-athetoid movements which persisted beyond the acute phase; he was evaluated in the United States for further therapy and remained with abnormal movements and seizures as well as developmental delay (Figures 3A and B). 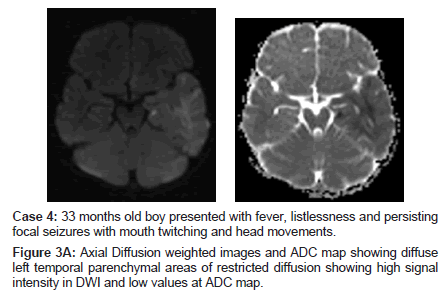 Case 5: 3 years old girl.
Figure 4A: Axial Diffusion weighted images and ADC map showing multiple patchy areas of restricted diffusion seen at the fronto-temporal lobes on both side sides more significant on the right side with high signal intensity in DWI and low values at the ADC map. 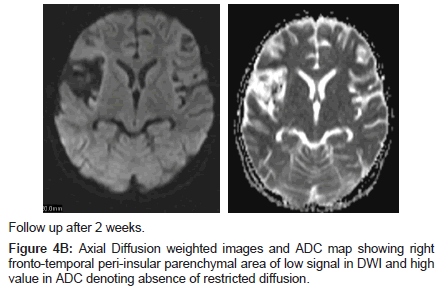 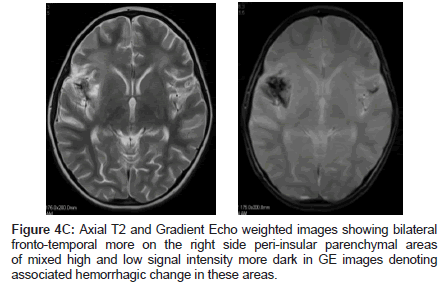 A 5 months old girl was admitted with a history of fever and a right sided focal seizure lasting for around 20 minutes, she went on to have further seizures on day 6 in spite of treatment with phenytoin responding to Phenobarbitone. Her CSF became positive for HSV after the first week. She received three weeks of aciclovir and was discharged home with no seizures or focal neurological deficit. Three months later she presented with infantile spasms but responded to treatment, her development is normal.

A 2 years old boy presented with fever and staus epilepticus and was treated with Phenytioin and Phenobarbitone; he was commenced on aciclovir based on a positive CSF result for HSV. Following treatment with aciclovir he showed complete recovery (Tables 1-3).

Table 3: EEG and MRI findings in the 7 patients.

HSV-1 and -2 are transmitted from contact with an infectious area of the skin during reactivations of the virus. Although less likely, the herpes viruses can be transmitted during latency. Transmission is likely to occur during symptomatic reactivation of the virus that causes visible skin sores.

Brain infection is thought to occur by means of direct neuronal transmission of the virus from a peripheral site to the brain via the trigeminal or olfactory nerve. Factors that precipitate HSE are unknown and HSE represents a primary HSV infection in about one third of cases; the remaining cases occur in patients with serologic evidence of preexisting HSV infection and are due to reactivation of a latent peripheral infection in the olfactory bulb or trigeminal ganglion or to reactivation of a latent infection in the brain itself [1-3].

Herpes simplex encephalitis is a life-threatening infection of the central nervous system Although HSE is rare, mortality rates may reach 70% in the absence of therapy and only a small percentage of affected individuals return to normal function. Antiviral therapy is most effective when commenced early, necessitating prompt diagnosis [4,5]. Clinically the infection may have an insidious or an abrupt onset. Patients present with headache, altered consciousness, and focal neurological abnormalities

Patients typically have malaise, irritability, and nonspecific symptoms lasting 1-7 days followed by acute onset of fever and focal neurologic signs [6,7]. Untreated HSE is progressive and often fatal in 7-14 days. A landmark study by Whitley et al. in 1977 described 70% mortality in untreated patients and severe neurologic deficits in most of the survivors [6].

Polymerase chain reaction (PCR) of the cerebrospinal fluid (CSF) is the diagnostic method of choice for HSE. False-positive CSF HSV PCR results are rare when testing is performed in experienced laboratories but negative results need to be interpreted in the context of the patient’s clinical presentation and the timing of the CSF sampling, As PCR results may be negative early in the course of herpes simplex encephalitis repeating CSF analysis should be considered if HSE is still suspected. Atypical forms of herpes simplex virus central nervous system disease may occur in children [6,7].

Herpes simplex encephalitis continues to be associated with poor long-term neurological outcomes despite appropriate therapy [7]. In our series better out come is seen in younger children while epilepsy focal neurological deficit and speech delay were the common long term sequelae.

Owing to the life-threatening nature of the disease, therapy should be instated while the PCR confirmatory results are pending.

Radiologically, in children older than 3 months and in adults, HSE is usually localized to the temporal and frontal lobes with evidence of acute inflammation, congestion and/or hemorrhage. Less frequently, cingulate gyrus, basal ganglia, and parietal and occipital cortices may be affected [8]. In very rare occasions, infection is limited to the brainstem and in these cases, cranial nerves abnormalities are the main manifestations [9].

Although the neuroimaging abnormalities seen in HSV encephalitis are not unique, more than 90% of patients with proven HSV encephalitis will have magnetic resonance imaging (MRI) abnormalities involving the temporal lobes. Special MRI techniques, including fluid-attenuated inversion recovery and diffusion-weighted imaging, might reveal abnormalities not seen with conventional imaging sequences [10,11].

In neonates and young infants, brain involvement is generalized and the usual cause is HSV-2, which is acquired at the time of delivery [4-6].

Elbers et al. [7] reported classical clinical presentations in 75% of the cases, cerebrospinal fluid pleocytosis was found in 94%, elevated CSF protein in 50%, EEG changes in 94% and diagnostic imaging abnormalities in 88%. All patients were treated with intravenous acyclovir. Neurological sequelae occurred in 63% of cases, including seizures in 44% and developmental delays in 25%. There were no deaths in this study.

In our series all 7 cases had CSF pleocytosis (lymphcyte predominance), elevated CSF protein of more than 0.45 was observed in 3 patients initially and one more during the second week. Neuroimaging abnormalities were found in all cases.

Significant developmental delay was observed in three patients and epilepsy in three, while one patient developed paraplegia; however, this patients’ course was complicated by the development of acute demyelinating encephalomyelitis (ADEM). All patients received IV Acyclovir.

Temporal lobe involvement was present in five out of the seven cases while two patients showed diffuse abnormalities. In the patients with temporal lobe lesions, one patient also showed bifrontal abnormalities and the other showed early changes in DWI which was not detectable in all other sequences even contrast enhancement.

Our series confirm that HSV encephalitis is a serious disease in children. In our patients infants under the age of two did much better than older children in spite of the similar presentation and MRI findings and appropriate early treatment; this may reflect brain plasticity in the younger children. 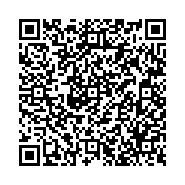