Copyright: © 2014 Spasovski D, et al. This is an open-access article distributed under the terms of the Creative Commons Attribution License, which permits unrestricted use, distribution, and reproduction in any medium, provided the original author and source are credited.

Introduction: When establishing new diagnostic method for detection of the endothelial dysfunction in Rheumathoid arthritis (RA), it is necessary to compare the diagnostic values with other laboratory variables.

Aim: The aim of this study is to determine the association between the asymmetric dimethylarginine (ADMA) and anti-cyclic citrullinated peptide antibodies (ACPA, Anti-CCP2) of the second generation in RA and to explain their connection in the process of citrulination of autoantigens in RA. Also, to determine the association between ADMA and the acute phase reactants: Rheumatoid factor (RF), C-reactive protein (CRP), as well as the index of disease intensity (DAS28) in early diagnosis in non-treated RA patients and to determine whether the amount of ADMA changes in the course of the evolution of disease.

Conclusion: There was an association between ADMA and anti-CCP2 antibodies of the second generation in patients with RA.

The association between arginine and citrulline, i.e. between asymmetric dimethylarginine (ADMA) as dimethyl derivative of the amino acid L-arginine and anti-cyclic citrullinated peptide antibodies (Anti-CCP2) of the second generation in patients with Rheumatoid arthritis (RA) is the isoform of the enzyme peptidylarginine deiminase (PAD). Enzymatic deimination or protein citrullination is a process catalyzed by PAD enzymes which take part in the pathogenesis of RA [1,2]. In humans five PAD isoforms (PAD1-4 and PAD6) are present. The greatest attention is paid to PAD2 and PAD4, as potential candidates that could play role in the process of citrullination of autoantigens in RA. Both enzymatic forms are present in the rheumatoid synovium and fluid [3-5]. The polymorphism of PAD4 is genetically associated with RA [6]. There is a difference in the tissue and cellular distribution of these two forms: PAD2 is ubiquitously distributed in tissue (on the cytoplasmic level), while PAD4 is more dominant in the hematopoietic cells (on nuclear level) [7-11]. In human neutrophils three different PAD isoforms (PAD2-4) are expressed. PAD targets are different cells’ substrates on cellular or sub-cellular level. In the process of intracellular protein citrullination, different auto-antibodies recognize these substrates as citrullinated substrates. But, this explanation is probably partial, because the protein citrullination can take place also extracellularly. Cellular targets, identified as potential citrullinated autoantibodies with extracellular distribution are: filaggrin, vimentin, β-actin, collagen type I and II, gamma enolase etc. [12-19]. Extracellular citrullination of fibrinogen is probably derived by PAD from damaged cells [4,20], but, so far it is not known in which conditions it occurs. Citrullinated autoantibodies play key role in the immune answer in RA. Few unique characteristics of protein citrullination enrolled in the pathogenesis of RA are identified: 1. The cytoplasmic content has autoantigenic features and is a target in the process of citrullination; 2. Although there are great number of proteins citrullinated by the active neutrophils, anti-CCP2 recognises only small number of these molecules; 3. Citrulline activity of each PAD isoforms is characterized by the unique substrate specificity, independently of their subcellular distribution. Only PAD2 is capable of citrullination of native β/γ actine, while H3 hystones are only citrullinated by PAD4 isoform. PAD4 isoform which is cytoplasmic enzyme similar to PAD2 is not able to citrullinate actine and H3 hystone; 4. Different reactive abilities of different sera in RA support the hypothesis that anti CCP2 antibodies recognize the unique sequence [2,21]. The variations in the specificity of anti CCP2 antibodies in different patients with RA are impressive. Probably all PAD isoforms share similar epitopes and their possible presence in the extracellular space indicate possible pass through the subcellular barriers.

Some aspects of dimethylarginine derivatives of the amino acid L-arginine

There are 2 stereoisomers of the L-arginine: symmetric (SDMA) and asymmetric dimethylarginine (ADMA). ADMA interferes with L-arginine in the production of nitric oxide (NO), which plays key role in the normal endothelial function. Namely, NO is synthesized in the endothelial cells with the enzyme-endothelial nitric oxide synthetase (NOS). The physiological substrate (precursor) for NOS in this enzymatic process is L-arginine, converted in NO and L-citrulline. The NOS is inhibited by ADMA. The plasma level of ADMA is elevated in RA. ADMA is synthesized by protein methylation mostly in the cellular nucleus. The methylation is catalyzed by the group of enzymes called protein arginine N-methyl tranferases (PRMTs type I and II). Both PRMT subtypes have the ability to methylate monomethyl arginine (MMA); type 1 asymmetrically dimethylates arginine and creates ADMA, while type 2 catalyzes symmetrical dimethylation of arginine and creates SDMA (Figure 1). The aim of this study is to determine the association between ADMA and anti-cyclic citrullinated peptide antibodies (Anti-CCP2) of the second generation in patients with Rheumatoid arthritis (RA) and to explain their connection in the process of citrullination of autoantigens in RA.

The diagnosis of the RA disease in the patients included in the study was based on the revised diagnostic criteria for classification of RA proposed in 1987 by the American Association for Rheumatism (ARA) [22]. In order to be included in the study every patient should fulfill at least 4 of the predicted 7 criteria.

In the study are included patients with RA aged 18-65 years, previously non-treated with NSAIDs or DMARDs.

In the study are not included patients with diseases or conditions that could directly or indirectly influence the results, such as: 1. Patients with previous history of spleen disease, thyroid disorders, hepatic damages, kidney, hematologic, neurologic and pulmonary disorders, autoimmune diseases, age<18 years; 2. Patients with Diabetes mellitus, acute infections, malignant diseases, febrile conditions; 3. Patients with uric arthritis, urinary infections, SLE, mixed connective tissue disease, vasculitis; 4. Patients with previous history of blood trasfusions, as well as overweight patients; 5. Patients treated with basic drugs for RA are excluded from the study; 6. Also, patients with the presence of hypeglycemia and elevated level of degradation products (serum urea and creatinin, urine creatinin), smokers, patients with arterial hypertension, hematologic and enzymatic disorders detected in 0 point, are excluded from the study; 7. Patients treated with cardiologic and hypolipidemic drugs, oral contraceptive drugs (estrogens, progesterone), vitamin E, nitroclycerin, arginine or analogues, and patients who received inhalational anesthetics one month before the start of the study are also excluded.

All participants voluntarily participated in the study, so the ethic criteria for the preparation of the study were fulfilled.

For quantitative determination of the endogen Asymmetric Dimethylarginine (ADMA) in plasma or serum.

ADMA is connected in the solid phase of the microtiter plate. The ADMA standard, the specimens and positive control are pre-acylated in combination with rabbit anti-N-acyl-ADMA, and are incubated for 15-20 hours on 280 C. Later they are washed and the second antibody is added - anti rabbit IgG conjugated with peroxidase. They are incubated for 1 hour on room temperature. After washing, in order to get dying, tetramethylbenzidine is added as a substrate solution (TMB). After 20-30 minutes of the incubation it is stopped adding sulfuric acid. The absorbance is read on microtiter read on 450 nanometers. ADMA concentration is determined with the standard curve. Basically the amount of antibodies connected in the solid phase of ADMA is conversely proportional to the ADMA concentration in the specimens.

Quantitative method for determination of the ESR is the Westergren method.

To test the significance of differences between two arithmetic means (proportions), the Student’s t-test is used in comparison with the mean values of the determined numerical parameters between two groups, as well as Wilcoxon-matched test for independent specimens. The sensitivity and the prediction for the positive and negative test of the examined markers are determined with the test for sensitivity and specificity. The P-value in the range 0.05 and 0.1 is considered statistically significant. The data processing is made with the statistical package - Statistica 7.0. 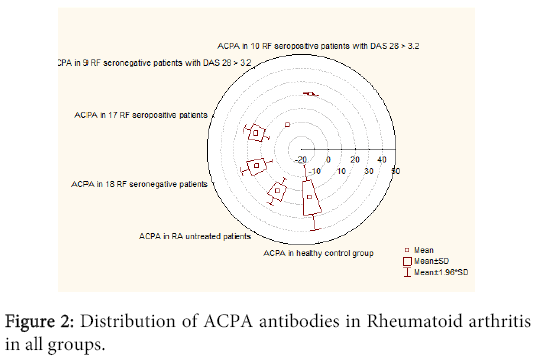 Figure 2: Distribution of ACPA antibodies in Rheumatoid arthritis in all groups.

The ADMA activity in serum is normally low. It is elevated in endothelial dysfunction, because of the presence of the chronic inflammation in RA. Its presence is quantified by the degree of inflammation in RA which correlates with the disease activity. There is a strong correlation between ADMA and anti-CCP2 antibodies from the second generation in early RA as a result of the disease activity and chronic inflammation [24-26]. Seropositivity influences the ADMA induction (present also in our case)-seropositive RF patients with DAS28>3.2 have higher ADMA induction than seronegative RF patients with DAS28>3.2. 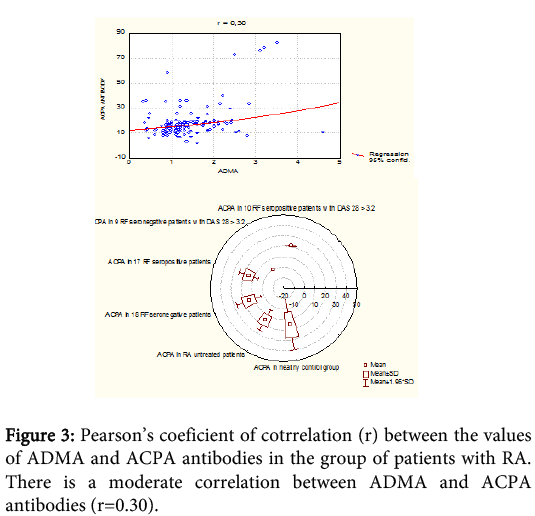 The association between anti CCP2 antibodies and RF IgM in patients with RA and their predictive value is shown by other authors [27]. They conclude that anti CCP2 antibodies and RF IgM are associated with the impaired endothelial function, independently from other cardiovascular risk factors. These autoantibodies could be reflection of the early atherosclerotic conditions and can induce increased risk of cardiovascular diseases.

Other authors have almost equal perception [29]. They emphasize that PAD enzymes catalyze the conversion of arginine residues in proteins with citrulline residues. The citrulline is not a standard amino acid. It is not incorporated in proteins during translation, but is generated post-translationally by PAD enzymes. In normal conditions only nuclear histones possess this amino acid.

Other authors also agree with the principle of auto-antigenicity in RA [30]. They relate auto-antigenic citrullination and different PAD enzymes in RA, emphasizing that PAD enzymes have intrinsic capacity for selection of protein targets. Such specificity could play role in auto-antigenic selection in RA. Other authors [31-33] conclude that citrullination of the proteins is enabled with the enzymatic conversion (by PAD enzyme) from proteins that contain arginine residues towards citrulline residues. They agree that PAD enzymatic activity fulfill the criteria as additive marker in monitoring disease progression, together with anti CCP2 and RF. They emphasize that the PAD method for detection is rapid, sensitive and relatively cheap.

ADMA is indirectly linked between autoantigenic citrullination and peptydyl-arginines’ enzymatic isoforms in RA. Determination of ADMA together with other biological parameters contributes in the early diagnosis of RA.