Copyright: © 2014 Kaiser R. This is an open-access article distributed under the terms of the Creative Commons Attribution License, which permits unrestricted use, distribution, and reproduction in any medium, provided the original author and source are credited.

Background: While several studies have been published on the prognosis of the meningitic and encephalitic courses of TBE, only few data exist on the long-term prognosis of the myelitic form of TBE. Therefore, the objective of the prospective study on hand was to follow up on such patients over a period of 10 years.

Method: In Baden-Wuerttemberg, 731 patients fell ill with TBE between 1994 and 1999. Of those patients, 81 (11%) suffered from encephalomyelitis. All patients were asked to participate in this study, and 57 gave their consent. Individual impairment was measured by allocating separate scores for the paresis of the extremities or cranial nerves, ataxia, impaired consciousness, respiratory paralysis, and defective hearing. Total impairment was measured at follow-up investigations after 1, 3, 5, and 10 years.

Results: A total of 11 patients (19%) recovered, 29 (51%) suffered from persisting paresis or other impairments, and 17 (30%) died between 1 and 10 years after the acute disease. The most important improvements occurred during the first year after the acute disease; after that, amelioration became less intense and increasingly rare. The clinical findings after 5 and 10 years, respectively, correlated well with the status of the acute disease (r=0.8, p<0.01), allowing to hazard a prognosis at the first presentation. The best level of regeneration was seen for ataxia, impairment of consciousness, double vision, urinary retention and mild paresis of only one extremity (4/5). Prognosis was worst in patients with tetraparesis and simultaneous occurrence of respiratory paralysis and/or dysphagia, dysarthria or paresis of the neck muscles.

Conclusion: The myelitic course of TBE is associated with a chance of recovery in only about 20% of patients. Clinical deficits do not correlate with findings in magnetic resonance tomography although they do with observations in postmortem studies.

In Middle and Eastern Europe tick-borne encephalitis (TBE) is one of the most prominent infections of the central nervous system. The risk of infection after a tick bite in an endemic region ranges between 1:50 and 1:100, and about one third of infections result in clinically manifest disease.

Data on the acute disease were provided for 731 patients with TBE who were examined within the scope of a prospective study in Baden-Wuerttemberg between 1994 and 1999 [1]. Of those patients, 47% suffered from meningitis, 42% from encephalitis, and 11% from encephalomyelitis. Data on the long-term prognosis of TBE are available mostly with respect to patients who suffered from meningoencephalitis, but little is known about the outcome of patients with a mainly myelitic course of the disease [2-7]. Therefore, the objective of the study on hand was to investigate the prognosis of patients with TBE-virus induced encephalomyelitis.

Inclusion criteria for the study were participation in the abovementioned study between 1994 and 1999, and the manifestation of encephalomyelitis (N=81) [1]. In each patient, the clinical diagnosis of TBE was confirmed by the demonstration of IgM and IgGantibodies against TBE in serum, the presence of more than 5 cells/μl in the cerebrospinal fluid, and the exclusion of a former immunization against TBE.

After obtaining their consent to participate in this study, the patients were re-examined after 1, 3, 5, and 10 years. Myelitis was defined as the presence of flaccid paresis in at least one extremity. The extent of paresis was measured according to the guidelines of the Medical Research Council, one point corresponding to a mild paresis (4/5), and five points being equivalent to complete paresis. Paresis of the cranial nerves (dysarthria, dysphagia, Bell’s palsy, double vision, hypacusis), ataxia, respiratory paralysis and urinary retention was scored with one point only. Two points were assigned to bilateral Bell’s palsy and hypacusis. The sum of deficiencies was calculated individually based on all the deficits of each patient, describing his or her state of impairment at all times of follow-up. The maximum sum of deficiencies was 30 points (4×5+2×2+6×1).

The objective of the study was to describe the variability of the acute presentation of encephalomyelitis, and to investigate which clinical findings at the beginning of disease may be predictive of its further course.

Men were affected three times as frequently as women (n=60 vs. 21). The median age was about 54 years (range: 17 – 84 years). The incidence of individual symptoms is shown in Table 1. There were no patients where only the spinal cord was affected; all patients additionally exhibited more of less frequent symptoms of the brainstem or the cerebral hemispheres. The need for assisted ventilation was mainly due to cervical myelitis affecting the C4 radices. The median time for assisted ventilation was about 30 days, ranging from 3 days to 10 years (longest time of follow-up). Rare yet typical symptoms of an encephalitic manifestation of TBE were tremor of the extremities and the facial muscles, yawning spasm and getting easily startled.

Table 2 shows the number of patients at each time of investigation. Twenty-four out of 81 patients were unwilling to participate in this study or were lost to follow-up due to a change of residence. Except for two patients who suffered further deterioration during the first year of follow-up (more pronounced tremor of extremities, dysarthria, and gait disturbances) the course of disease was stable or improved. Of the 57 patients who participated in the study, 17 (30%) died from primary or secondary problems associated with TBE (mostly impairment of breathing), and 3 died for other reasons. Only 11 patients (19%) achieved the “status quo ante” within 1 to 10 years, and 29 patients (51%) suffered from various sequelae of the disease for many years.

Remission within individual periods of observation

The degree of remission of symptoms was calculated from the difference in the sum of deficiencies at the respective times of examination. Figure 1 shows the degree and frequency of remission at different times of examination. During the first examination one year after the acute disease only a very small number of patients showed no enhanced condition at all, whereas most of the others had improved considerably by up to nine points. However, at re-examination several years later, improvements had become increasingly rare and less intense. There was no relation to age or gender. 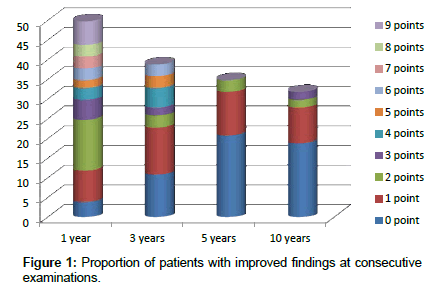 Figure 1: Proportion of patients with improved findings at consecutive examinations.

Table 3 shows the number of patients with residual dysfunctions at the particular dates of follow-up. The best tendencies of improvement were achieved for double vision, ataxia, and urinary retention, which were absent one year after the acute illness.

Bell’s palsy as the sole manifestation of cranial nerve involvement in patients with myelitis was observed only three times. In all other patients, facial palsy was associated with paresis of additional cranial nerves (dysarthria, dysphagia, double vision) or ataxia. Out of 25 patients with paresis of multiple cranial nerves seven died within one year, and two in the second year after the acute disease. Two patients were lost to follow-up. In most patients, facial palsy persisted for many years without any tendency to recover. Complete recovery was seen only in 7 out of 25 patients (30%).

Sixteen patients suffered from hearing impairment, in six cases on both sides. Within ten years only two patients recovered (12%).

Paresis of the cervical muscles was present in 33 patients. These individuals were unable to raise their head from the pillow. Seven of them died within the first year, and another seven within the next ten years after the acute illness. Five patients did not participate in the study. Paresis persisted in six patients, and 8/28 patients recovered (28%).

Paresis of the extremities

Paresis of only one extremity and with a low grade (4/5) had the best prognosis: All five patients with this kind of paresis recovered within one year. The two patients with 3/5 pareses at the beginning still suffered from 4/5 pareses five years later. In all patients with pareses >3/5 during the acute illness this deficit persisted for a period of 5 to 10 years, leaving a significant impairment with atrophies and mostly proximal pareses.

Patients with paraparesis had an even poorer prognosis: 10 years after the acute illness 5/8 patients still suffered from severe impairment. Prognosis was worst for patients with tetraparesis: Of 33 patients who were followed up, 15 passed away due to TBE within ten years. No patient recovered within five years, only two showed an improvement after another five years, most probably as a result of intensive training of the muscles in the vicinity of the paresis.

Patients who died as a result of TBE exhibited significantly higher sums of deficiencies than those who survived (22.7 ± 6 vs. 14 ± 9, p<0.001). The lowest sum of deficiencies (at the onset of TBE) was found in patients who recovered within five years (2.8 ± 2.2). The combination of tetraparesis with the need for assisted ventilation and/or paresis of multiple lower cranial nerves were associated with the most unfavourable outcome. The clinical findings at follow-up investigations after five years showed a good correlation with the first sum of deficiencies (r=0.823, p<0.01).

Even though various viral agents may cause myelitis (varicella zoster virus, Type 1 herpes simplex virus, Epstein-Barr virus, adenovirus, coxsackie A und B, ECHO viruses, polio virus, lymphocytic choriomeningitis virus, HIV, HTLV-I, and hepatitis C virus), a viral aetiology can be proved in a very small number of cases only. Therefore, a MEDLINE search yielded several publications about the acute course of myelitis, but not a single paper on follow-up investigations of patients with viral myelitis. TBE virus infections manifest mostly as meningitis or encephalitis and only rarely as myelitis, but in Southern Germany TBE virus infection is probably the most frequent aetiology of viral myelitis.

The collected data show great variability of the clinical manifestation of myelitis during the acute phase of the disease. In favourable cases the patient comes down with only a mild paresis of one extremity, whereas in more serious circumstances the patient suffers from severe pareses of two or more extremities, paresis of the lower cranial nerves, and an additional requirement of assisted ventilation. The severity of clinical symptoms at the first presentation correlated well with long-term prognosis. Patients with only “mild” symptoms at the onset mostly had a good prognosis and vice versa. The persistence of severe paresis can be explained by the findings of post-mortem studies of patients who died from TBE and exhibited large areas of neuronal loss caused by lytic infection of neuronal cells [8-10]. TBE viruses preferably infect the Purkinje cells in the cerebellum, the motor neurons in the lower brainstem and the spinal cord and certain neuronal cells in the thalamus. Destruction of neuronal cells is the main reason for poor recovery from severe paresis. This was seen in pareses not only of extremities but also of the cranial nerves. Facial palsy caused by the TBE virus has an even poorer prognosis than idiopathic Bell’s palsy, where about 10% of the patients suffer from persistent paresis [11].

This systematic prospective follow-up study confirms the individual experiences of many consultants that impairments after TBE rarely improve after a period of three to five years has passed, and that the extent of improvement decreases from year to year. After five years only a very small proportion of patients show any improvement at all.

However, not all TBE patients have a poor prognosis. Two-thirds of infections may not become clinically manifest, and of those who actually fall ill, more than 50% recover within several weeks to months after the acute disease. Only patients with encephalitis and/or myelitis have a poor prognosis with an influence on the quality of their further life [2-7,12].

In conclusion, the study on hand shows that in TBE patients the occurrence of myelitis is mostly associated with a poor prognosis, a large proportion of patients facing persistent deficits and only a small percentage experiencing complete recovery.