Obesity and Sexual Abuse in American Indians and Alaska Natives

Copyright: © 2016 Levine AJ, et al. This is an open-access article distributed under the terms of the Creative Commons Attribution License, which permits unrestricted use, distribution, and reproduction in any medium, provided the original author and source are credited.

Mainstream American culture frequently minimizes the prevalence and significance of sexual abuse. Unfortunately, this denial of extensive victimization of women is also present in many underserved populations. In June 2007, Amnesty International released its report on sexual abuse in indigenous women, which states that, “One in three Native American or Alaska Native women will be raped at some point in their lives. Most do not seek justice because they know they will be met with inaction or indifference.” This report highlighted an infrequently discussed issue namely, very high levels of sexual abuse in Native American and Alaska Native women. The relationship between sexual abuse and obesity has been delineated in several studies; overall about one quarter to one half of women with high levels of obesity has been sexually abused and it has been postulated that weight-gain serves as an adaptive response for many survivors of sexual abuse. It is also well known in Native American and Alaskan Native women that there is a high prevalence of obesity (about 40% greater than the population average) and that this obesity is associated with a many-fold greater risk of diabetes and increased risks of hypertension, cancer and cardiovascular disease. The link between the concomitantly high rates of sexual abuse and obesity in this population may or may not be partial causality but the issue is nonetheless important. If approaches are to succeed in reversing the trend of increasing levels of obesity in Native American and Alaskan Native women, the high prevalence of sexual abuse will need to be specifically and comprehensively addressed.

Several minority populations in the United States have been identified that have greater rates of obesity than the Caucasian population [1]. Also, some of these populations are more prone to the complications of obesity such as to diabetes and hypertension [2,3]. One such minority group is American Indians and Alaskan Natives who not only have high obesity rates but also particularly high rates of diabetes [4,5]. Federal agencies and expert panels describe the concept of targeted weight-loss interventions [6-8] for such populations in accordance with indigenous culture [9] and local factors in order to mitigate the heightened health risks.

The notion of “targeted interventions” for obesity stems from the assertion that either (a) specific populations have unique biological and/or environmental risk factors for obesity and the associated complications or (b) the appropriateness and effectiveness of intervention strategies for prevention or treatment vary for different populations. An example of a biological risk factor might be a genetic predisposition to develop diabetes in association with obesity [10] and an example of an environmental factor that predisposes a specific population to obesity is the physical environment that houses such a population (i.e.; “the concrete jungle” or poor access to healthy food and spaces that facilitate physical activity)[11].

Another environmental or societal factor that has been linked to obesity is sexual abuse [12-14]. A history of sexual abuse is frequently associated with obesity in women (the association does exist for men also [15]); when the data from several large surveys are coalesced, the theme is clear; about two thirds of female patients seeking treatment for obesity will have some lifetime history of prior abuse (emotional, physical or sexual) [16,17] and in approximately one third they will report a history of prior lifetime sexual abuse specifically [15,18-23]. In a prospective study of 173 female children, half of whom had experienced substantiated childhood sexual abuse, the abused female subjects were 2.9 times more likely to have obesity by young adulthood (age 20-27) than demographically-matched controls (P=0.009)[24].

Several possible mechanisms have been proposed to explain this relationship between obesity and being the victim of sexual abuse [25]. One possible mediating mechanism is the higher prevalence of mood disorders found in survivors of abuse. Depression is related to poor outcome from obesity treatment [26] and numerous surveys have demonstrated that survivors of abuse are more pre-disposed to depression compared to those who deny a history of abuse [27-29]. A second hypothesis focuses on a possible relationship between abuse survivorship and eating disordered symptoms. Several studies have found that eating disorders are more prevalent in survivors of abuse [30], and in terms of obesity, that many obese individuals with binge eating disorder are survivors of childhood sexual abuse [19,31]. A third premise that has been examined is the viewpoint of obesity as an adaptation to being the victim of abuse.

Patients’ self-reports and evaluations suggest that the link between sexual abuse and obesity includes factors such as self-loathing [32] and the desire to create a sexually-protective barrier for themselves [33,34]. In support of this premise, it has been reported that for some women with a history of sexual abuse, weight loss may trigger symptoms of post-traumatic stress disorder, thereby making weight loss problematic [35].

Although, there may be a well-documented association between obesity and sexual abuse (we need to remember that there are many abused women who do not become obese) [36], what is unknown at this time is how to successfully treat obese individuals who have been sexually abused [16]. Survivors of sexual abuse may be at risk for a mood disorder [37], posttraumatic stress disorder [38-40] or even psychiatric hospitalization [41] with weight loss intervention, prompting some researchers to begin to explore the possible benefits of addressing survivorship issues to render weight loss most efficacious [18,22,35,42]. Clearly further research is needed to explore how to tailor weight loss interventions for survivors of childhood sexual abuse.

The landmark 2007, Amnesty International report was entitled, ”The Maze of Injustice – the failure to protect indigenous women from sexual violence in the USA” [43] and documents astonishingly high levels of sexual violence committed against Native American and Alaskan Native women. It is noted that Native American and Alaskan Native men are also physically and sexually abused but the prevalence rates are about four-fold less [44]. Prior to this report, US Department of Justice data [45] had documented that one in three Native American and Alaskan Native women are likely to be raped or sexually assaulted in their lifetime. Similarly, the survey recently conducted by Yuan and colleagues [46] in 1,368 people from six Native American tribes, suggested that 45% reported have been physically assaulted and 14% to have been raped. These statistics, however harrowing, are likely to be gross underestimates of the problem the Amnesty International report suggests; On one reservation, for example, “many of the women who agreed to be interviewed, could not think of any native women within their community who had not been subjected to sexual violence”.

The failure to document and halt sexual abuse in Native American and Alaskan Native communities (in reservations and in nonreservation communities) occurs for several reasons that are detailed in the Amnesty International report [43]. First, there are no standardized federal procedures for gathering the data; for example the US Department of justice audit recommended, “Encourage law enforcement agencies, regardless of investigative jurisdiction, to report crimes committed in Indian country to the FBI, for inclusion in the Uniform Crime Report” [47].

Second, women do not feel that reporting these issues will precipitate a response; this is in part because of under-policing but also because of poor cooperation between the tribal, state and federal legal systems. Third, sexual assault forensic examinations are often unavailable or of inadequate quality because of limitations both in training and staffing of the Indian Health Service. Fourth, there is insufficient support for victims either medically or psychologically. Fifth, there is poor accountability so that a victim rarely discovers the result of their report. Sixth, there are underlying societal issues such as racism (most of the sexual assaults are committed by non-natives [43]), poverty and social marginalization. Overall, being the victim of sexual violence has become commonplace for Native American and Alaskan women. The etiology of these disparities may not be substantively different from other populations exposed to multigenerational trauma [12] and include multiple social determinants of health such as discrimination, poverty, a physical environment that does not facilitate healthiness, and lack of health equity following multigenerational trauma. Other inequities are important too such as in education (historically, federally sanctioned boarding schools [48,49] and currently educational inequity [12]), social capital, housing and access to healthcare access.

As targeted approaches are designed to reverse obesity in Native American and Alaskan Native people [50-53], violence committed towards women cannot be ignored as the two issues are likely to be inexorably linked. Reversing obesity can only succeed in an environment where the basic human rights of individuals are respected. The link between the concomitantly high rates of sexual abuse and obesity in this population do not need to be causal for the issue to be important. It is likely that the high prevalence of sexual abuse in Native American and Alaskan Native women will need to be addressed if targeted obesity programs are to succeed in this population.

What to do? While many communities and scholars attempt interdisciplinary projects, outcomes are often disappointing because one partner predominates, contributors fail to establish a common language and shared objectives, or the venture fails to establish a truly shared process to meet the community’s needs. Successful programs to address obesity and sexual abuse in American Indians and Alaska Natives necessitate fostering an interdisciplinary environment whereby all participants contribute equitably toward common goals. We have suggested an Intra-Community Model for conducting Community Based Participatory Research (Figure 1), whereby the entire process of research-through-outcome is centered on the needs of the community. While self-empowerment is critical for a person’s success to deal with trauma or obesity [54,55], so too community empowered is the key to redressing community-linked health disparities associated with trauma, obesity and chronic disease. 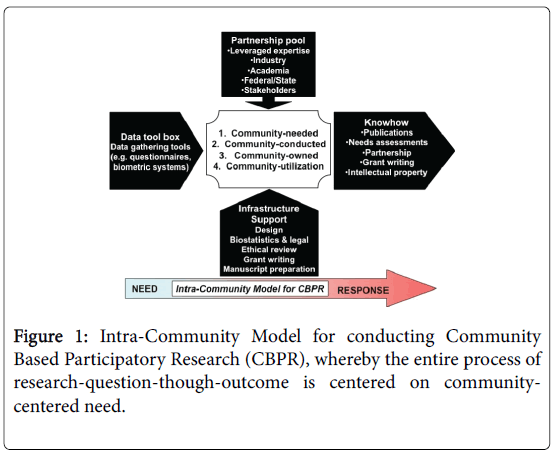 The assistance and critical review of Dr J Kaur is acknowledged.