The Study of Chitosan-Citrate Solution as a Root Canal Irrigant: A Preliminary Report

Copyright: © 2014 Suzuki S, et al. This is an open-access article distributed under the terms of the Creative Commons Attribution License, which permits unrestricted use, distribution, and reproduction in any medium, provided the original author and source are credited.

Currently, most endodontists use sodium hypochlorite (NaOCl) as the primary root canal irrigant. A combination of ethylenediaminetetraacetic acid (EDTA) and chlorhexidine (CHX) is also used for endodontic treatment [3]. These root canal irrigants satisfy some ideal requirements as they possess a broad antimicrobial spectrum, are capable of dissolving necrotic pulp tissue, inactivate endotoxins, and either prevent the formation of a smear layer or dissolve it once it has formed [3,4].

However, these root canal irrigants have some disadvantages. NaOCl is reported to exhibit cytotoxicitywhen injected into periradicular tissues, unpleasant taste, potential for caustic corrosion and allergic reaction [5]. Because of its irritating properties and potential for severe inflammatory reactions, efforts have been made to find alternatives to NaOCl irrigation [3]. Although CHX would be less caustic than NaOCl, it is reported that 2%CHX is irritating to skin [4]. Therefore, the root canal irrigant should be systemically nontoxic, noncaustic to periodontal tissues and have little potential to cause an anaphylactic reaction.

In order to solve this problem with citric acid, some investigators prepared a mixture of citric acid and antibiotics and evaluated its antibacterial activity and removal of smear layer. Several root canal irrigants, such as Biopure MTAD® (Dentsply Tulsa Dental Specialties, Tulsa, OK) and Tetraclean® (Ogna Laboratori Farmaceutici, Muggiò, Italy) have been introduced as new irrigants. These formulations appear to have enhanced antibacterial activity against Enterococcus faecalis and removal of smear layer. [11-14]. However, these formulations tended to produce bacteria resistant to antibiotics such as tetracycline and others [15].

Therefore, we focused on chitosan mixed with citric acid as a root canal irrigant. Chitosan is a natural polysaccharide, which has attracted a great deal of attention in dental research because of its biocompatibility, biodegradability, bioadhesion and lack of toxicity [7]. Chitosan has a broad spectrum of antibacterial properties [16] and it has high chelating ability for various metal ions in acidic conditions [7]. Researchers have investigated the antibacterial activity of an endodontic sealer mixed with chitosan and calcium hydroxide combined with chitosan against E. faecalis and removed the smear layer using chitosan-acetate solution [7,17-19].

E. faecalis has been frequently selected for experimental studies of endodontic infection because it is a persistent organism that plays a major role in the etiology of periradicular lesions which persist after root canal treatment, although it makes up a small proportion of the flora in untreated canals. It is commonly found in a high percentage of root canal failures and it can survive in the root canal as a single organism or as a major component of the flora [20,21]. Furthermore, E. faecalis was found to be resistant to acid and alkalis. These characteristics may explain why E. faecalis is frequently isolated from acidic caries lesions and from persistently infected root canals where calcium hydroxide medication is ineffective [22].

The use of chitosan mixed with citric acid as a root canal irrigant has not been reported. We hypothesized that the mixed chitosan-citrate solution shows antibacterial activity against E. faecalis and effectively and safely removes the smear layer. The purpose of this study was to determine whether chitosan-citrate solution shows antibacterial properties against E. faecalis and removes the smear layer when used as a root canal irrigant.

The pH of 10% citric acid was adjusted with NaOH and checked with a digital pH meter (HORIBA, Tokyo, Japan). 0.04 g chitosan oligosaccharide (Yaizu Suisankagaku Industry Co., Ltd., Shizuoka, Japan) was added to 1 mL of 10% citrate buffer solution, and the mixture was stirred until completely dissolved. The pH of the chitosancitrate solution was adjusted at 3.5.

E. faecalis (4532D) was incubated overnight at 37ºC in brain-heart infusion (BHI) broth. 10 μl of planktonic bacterial cells was transferred into each test tube. The tubes were centrifuged (10000 g x 5 min) and supernatants were discarded. Chitosan-citrate solution (pH3.5), 10% citric acid (pH3.5) and control (PBS) were tested. 100 μl of test solution was added to the bacterial inoculum for 5, 15, 30 and 60 min, diluted with 900 μl phosphate-buffered saline (PBS), 100 μl plated onto BHI agar plates and incubated for 48 h at 37ºC. Colonies were counted after 48 h of incubation at 37ºC, and expressed as colony-forming units (CFU) per milliliter. The antimicrobial effect of chitosan-citrate solution was recorded at 5 min, 15 min, 30 min and 60 min. The data indicated the survival rate obtained when the control is 100%. Statistical analysis of E. faecalis survival rates under different solutions was performed using one-way repeated measures ANOVA and the Tukey test. A significance level adopted was 0.01 (n=4).

The study protocol was approved by the Ethical Committee of Showa University School of Dentistry (No.2011-052). Fifteen extracted human maxillary central incisors were selected based on their relative dimensions and similarity in morphology. All teeth were stored in 0.1% thymol solution before use. All teeth were decoronated at the cement enamel junction with a water-cooled carborundum disk. The canals of 15 roots were instrumented according to the step back technique with a Gates-Glidden drills and K-type files to No.35 at the working length. Irrigation during instrumentation was performed with 1 mL 5.25% sodium hypochlorite after using each file. Upon completion of instrumentation, the apical and coronal thirds of each root were removed. The middle third of the root was cut longitudinally, and 30 specimens were prepared. Ten specimens each were immersed in chitosan-citrate solution (pH3.5), 10% citric acid (pH3.5) and PBS for 5 min. This duration was decided based on the time by which obtained the antibacterial activity of chitosan-citrate solution against E. faecalis. After performing these procedures, all specimens were dehydrated in t-Butyl alcohol. They were mounted on aluminum stubs, vacuumdried (VFD21S; Vacuum Device Inc, Ibaraki, Japan), coated with palladium-gold (E-1030 ION SPUTTER; HITACHI, Tokyo, Japan) and the middle third of root was examined under a scanning electron microscope (JSM-5500; JEOL, Tokyo, Japan). Observations were made at 30 kV under a magnification of x 350. The number of open dentin tubules within a five fields (50 μm x 50 μm) chosen randomly from SEM micrographics was determined for evaluation of smear layer removal. The open dentin tubules were counted using Windows Photo Viewer. One-way repeated measures ANOVA and the Tukey test were used for analysis of open dentin tubules. The significance level adopted was 0.05 (n=5). 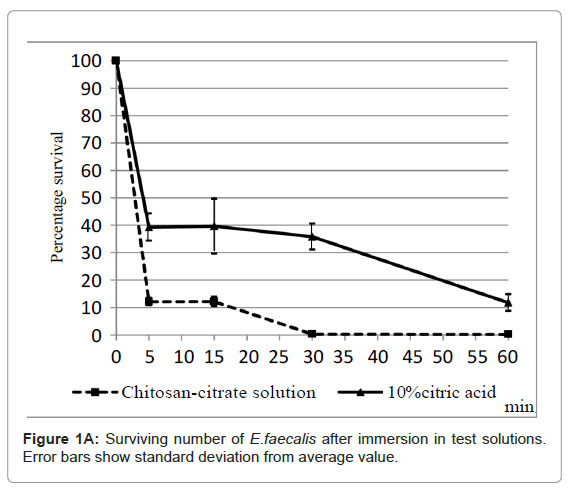 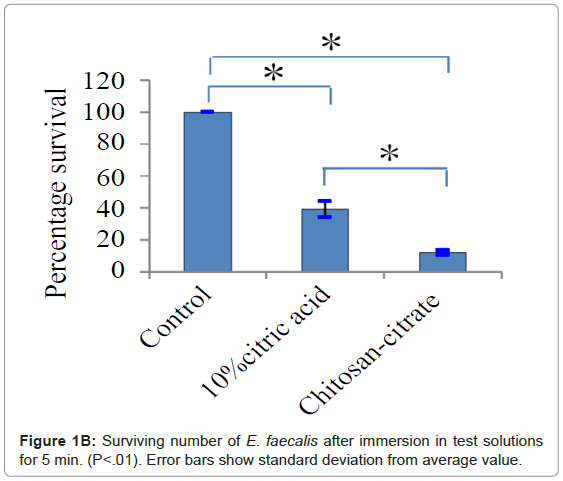 Table 1: The number of open dentin tubules (mean ± standard deviation, n=5 for each solution) for evaluation of smear layer removal.

The purpose of this study was to evaluate the antibacterial activity against planktonic E. faecalis and removal of the smear layer when using chitosan-citrate solution (pH 3.5). As mentioned above, citric acid alone could not provide a good antibacterial effect and good chelating effect simultaneously. Therefore, we considered chitosan as a material that supplements the capacity of citric acid. So far, the combination of chitosan and citric acid has been reported to be used as the liquid component of calcium phosphate cement for bone substitute materials [23]. In addition, citric acid was used as a cross linking agent to produce drug delivery chitosan film [24]. However, chitosan-citrate solution as a root canal irrigant has not been reported before.

In the present study, the antibacterial activityof chitosan-citrate solution depended on the application time. There was no statistically significant difference between the 5-min (87.9% reduction) and 60-min (99.8% reduction) applications. It is indicated that the antibacterial effect of chitosan-citrate solution was obtained at 5 min. However, a complete bactericidal effect was not achieved.

On the other hand, chitosan-citrate solution removed significantly more of the smear layer with less dentin erosionthan 10% citric acid when immersed for 5 min. It is important to emphasize that the scores attributed to chitosan-citrate solution were higher than those given to 10% citric acid, that is, chitosan-citrate solution resulted in superior cleaning of the root canal walls than 10% citric acid. This superior smear layer removal capacity can be attributed to the properties of chitosan. With the same determination method, chitosan-acetate solution was found to cause significant removal of smear layer with minimal dentin erosion [7]. However, the smear layer was retained with acetic acid. The chelating activity of chitosan was enhanced when mixed with acetic acid [28]. These findings were similar to our experimental results. In the present study, we applied an immersion time of 5 min; it may be necessary to experiment with shorter time in the future. Further, it should also be compared with other root canal irrigants. In addition, it is necessary to evaluate the coronal third and apical third of the root. In particular, the apical third area is important as it is difficult for root canal irrigants to reach the area.