Copyright: © 2017 Allen HB, et al. This is an open-access article distributed under the terms of the creative commons attribution license, which permits unrestricted use, distribution, and reproduction in any medium, provided the original author and source are credited.

We previously have found biofilms in the hippocampi of Alzheimer’s disease (AD) post mortem brain specimens. We had seen them in an extracellular location and noted them to be present in the areas of pathological plaque formation. Other investigators have found the presence of spirochetes (Lyme and dental) in affected (AD) brains, and these have been correlated with Treponema pallidum. In a recent historical comparison of the pathology of syphilis, the histological findings of syphilis and AD were shown to be exactly the same. Further, spirochetes have been cultured from the affected brains and have been found to make biofilms and beta amyloid precursor protein. Utilizing the same pathological methods as in our prior study, we have found biofilms in an intracellular location. The similarity of this finding to other diseases has been presented; and, the impact of the “intra” versus the “extra” cellular location is discussed.

We, and others, have found biofilms in the brains of Alzheimer’s disease (AD) patients [1,2]. These biofilms have been located primarily in the pathological plaques of that disease. As such, they are in an extracellular location, and the amyloidogenic “curli” fibers of the biofilm activate Toll-like receptor 2 (TLR2) of the innate immune system [3]. The major pathway utilized by TLR2, in its role of inactivating invading pathogens, is the MyD88 pathway which eventuates in NFÄ¸B and TNFα [4].

NFÄ¸B, together with β amyloid converting enzyme (BACE), catalyzes β secretase which cleaves off the terminal portion of β amyloid precursor protein to form beta amyloid(Aβ) [4]. Aβ is antimicrobial [5] and it surrounds the plaques of AD; however, it cannot penetrate the biofilm [1,2]. The TNFα (produced by the innate immune system) cannot penetrate the biofilms either, so it has been postulated to kill the surrounding tissue instead [6]. Further, TNFα together with TNFα converting enzyme catalyzes α secretase which eventuates in α amyloid.

The biofilms have been shown to be made by spirochetes; the primary evidence for this is the growth in culture of Borrelia burgdorferi from the brains of AD patients. These cultured organisms, in turn, made biofilms when put under environmental stress. Also, produced by these organisms was β amyloid precursor protein and smaller amounts of Aβ [7]. Consequently, the paradigm thus elaborated would be:

Spirochetes are the primary organisms involved because of the evidence both from the cultures, [7,8] and from the PCR evidence implicating Borrelia and dental spirochetes in a 25%/75% ratio [9,10]. The dental organisms have been found in as many as 90% of patients and have also been strongly linked epidemiologically to AD [11].

Our current investigation involves examination of AD brains for intracellular (not extracellular) biofilms. Using the same staining patterns as in our previous pathological examinations, we have found “intracellular biofilms in all the AD brains, and none of the controls.

We re-examined hippocampal specimens with the techniques described previously [1]. Seven hippocampal specimens from patients who had previously been confirmed both clinically and pathologically (post mortem) to have Alzheimer’s disease were re-examined by five pathologists. Ten control hippocampal specimens, from age and sex matched patients who died of unrelated, non-cerebral diseases and/or causes were included for study. All specimens were stained with hematoxylin and eosin (H+E), periodic acid Schiff (PAS), Congo red routine stains; all specimens were also stained with Treponema pallidum (TPI), β amyloid, CD 282 (TLR2) and CD 284 (TLR4) immunostains. The technique for these stains was as previously published. PAS and β amyloid stains were applied sequentially to the specimens and were examined. Routine light microscopy was employed. The specimens were not “blinded” because by gross examination alone, the AD specimens could be distinguished from the controls. Figure 1: Alzheimer’s disease hippocampus, Positive staining is noted in the cells’ cytoplasm; this is staining the extracellular polysaccharides of biofilm. PAS 40X. 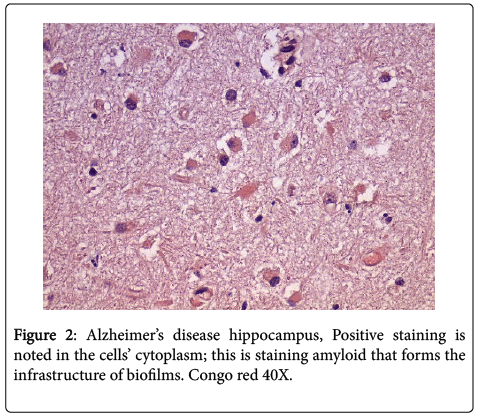 Figure 2: Alzheimer’s disease hippocampus, Positive staining is noted in the cells’ cytoplasm; this is staining amyloid that forms the infrastructure of biofilms. Congo red 40X.

Intracellular biofilms have not been noted previously in AD; however, they have been found in urinary tract disease and in pulmonary disease [12,13]. The intracellular biofilms in cystitis have been referred to as “pods”, and these “pods” when extruded into the surrounding tissue are fully capable of creating new, and larger, biofilms.

One possible impact of intracellular biofilms in AD is shown in the diagram (Figure 3). The intracellular biofilms could be extruded from the neurons as portrayed and become neurofibrillary tangles. These tangles have been shown to be present in tertiary syphilis as in AD [14]. They have also been shown, in the same historical comparison of the two diseases, to contain spirochetes (T. pallidum in syphilis and Lyme/dental in AD). 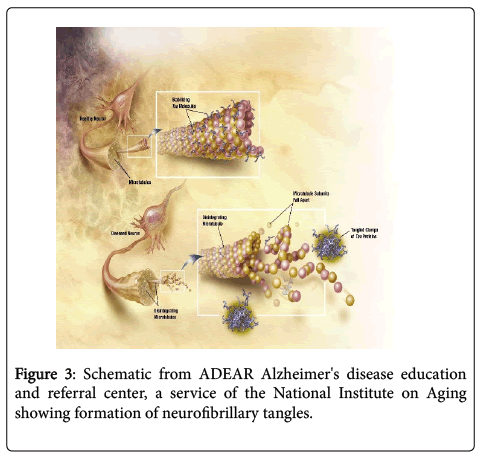 Figure 3: Schematic from ADEAR Alzheimer's disease education and referral center, a service of the National Institute on Aging showing formation of neurofibrillary tangles.

Biofilms are present inside the epithelial cells lining the bladder. Because of the intracellular location in the bladder, lungs and brain, the organisms have another level of protection in addition to the extracellular polysaccharide, “slime” coating. Situated inside the cell walls, they do not appear to be recognized by the immune system (as they are not in the urinary intracellular location). Thus, they remain a “nidus” of infection that contributes to the chronicity of the diseases.

As “pods”, the biofilms retain all the capabilities of extracellular biofilms: immune system avoidance, gene transfer, and reduced antibiotic diffusion [15]. Further, although it is not employed, they retain the ability to down regulate the immune response [16]. In the future, we will show this phenomenon of intracellular biofilms is not unique to the organs mentioned, but is also present in such diverse diseases as leprosy and psoriasis. Consequently, it is another example of nature behaving similarly as regards the pathogenesis of many diseases.

As regards treatment of biofilm-related diseases especially AD, it is extremely important to treat before the microbes make biofilms [1]. The example for this is syphilis which in its tertiary stage is a biofilmrelated disease. If treatment with penicillin is administered at any stage of the disease prior tertiary, syphilis is “cured”. Consequently, if Lyme disease is treated similarly, one would expect similar results. Also, if antimicrobials are given prior to dental work, similar results predictably would be forthcoming [1].

Treating after the biofilms have formed is much more challenging. A biofilm dispersing agent must be taken along with the antibiotics to allow the antibiotics to work. This has been shown to be effective in leprosy and in chronic arthritis [17,18]. Difficulty in AD, compared to the other diseases, arises because the debris needs to be cleared from the brain after the biofilm is dispersed and the organisms are killed. The sheer amount of debris would be overwhelming for the microglia [19]. Intracellular biofilms add immeasurably to the challenge.