Copyright: © 2017 Okpala NE, et al. This is an open-access article distributed under the terms of the Creative Commons Attribution License, which permits unrestricted use, distribution, and reproduction in any medium, provided the original author and source are credited.

Rice (Oryza sativa L.) is one of the leading food crops of the world and is a staple food for over half of the world’s population. Most commercial rice cultivars are from either japonica or indica subspecies, and these subspecies exhibit marked differences in both agronomic and physiological traits [1]. In countries with high human populations like China and India, rice is consumed daily in a variety of ways. Rice is the most widely cultivated crop in China. Rice production in India has increased remarkably in the recent past and now represents approximately one third of the global rice production [2]. Rice is also a staple food in Africa, where it is cultivated widely with a steady increase in consumption.

As household incomes increases, rice consumers are demanding rice with better cooking and eating qualities. Rice grain quality remains an important concern for rice breeders, producers, and consumers all over the world [3]. Improvement of grain quality is an aim for most rice breeders, because it affects the commercial value of rice [4]. Increased production efficiency for rice is needed all over the world, not just because of the inevitable expansion of the human population, but also because of the projected decrease of arable land. The major components of rice quality include its appearance, cooking quality, eating quality and nutritional quality [5].

Cooked rice elongation, water absorption, amylose content, and pasting temperature are some of the traits that have been identified to represent the cooking and eating quality of rice [6]. The aim of this study was: (i) to discern the differences in cooking and eating qualities between Hua Jing Xian 74 and Basmati 385 by comparing traits including cooked rice elongation length, pasting properties, starch granule morphology and amylose content, (ii) to determine if starch granule morphology affects the pasting temperature of rice varieties used for the study.

The ten rice varieties used in this study were cultivated in Hainan, China in November, 2014 and were harvested and stored under the same condition in April, 2015. The ten varieties are Basmati 385, Hua Jing Xian 74 and eight other varieties listed in Supplementary Table 1.

Whole and mature grains of ten varieties were dehusked using Jing Ao Liang Yong Qi Cai Chang JLGJ-45 de-husker machine. Rice grains that got broken during the process were discarded, as were immature grains. Whole and mature dehusked rice grains were milled with Taizhou Jing Ao LTJM-2008 milling machine. The objective of milling was to remove rice bran, which consists of the aleurone and pericarp tissues. Rice grains were all milled for three minutes.

Milled rice grains were pulverized with a Retsch Mixer Mill MM 400. The frequency was set at 30/sec and the grains were milled for 50 sec. Note that the mixer mill was extremely efficient for these samples; the samples remained cool after pulverizing.

Cooked rice elongation was here represented as the difference between the length of grains measured before and after cooking (see detailed cooking protocol below). In this kind of investigation, precision is very crucial; therefore a Microtek ScanMaker i56 scanner was used to make all of the length measurements.

For each line, 60 grains of milled rice were measured. 20 raw grains were measured at a time in ScanMaker i56. Each grain was then transferred to a PCR plate containing 155μl of distilled water. The grains were allowed to soak for 30 min. The PCR plate containing the rice grains was then placed in a PCR thermocycler and the rice grains were individually cooked for 20 min at 98°C and then for 5 min at 20°C. The cooked rice grains were then removed from the PCR plate and placed on a filter paper. After drying for 5 min at room temperature, they were transferred to a petri dish to be re-measured with the scanner. As with the raw grains, 20 cooked grains were remeasured simultaneously; this helped to control the variability of water content that could have resulted from unequal resting times between measurements. These experiments used 20 grains per cultivar per each of the three replicates..

This experiment was performed strictly in compliance with the instructions stipulated by Megazyme in the instruction manual for their Amylose/Amylopectin Assay kit; however, Sodium azide was not used in this experiment. As all solvents were used within 1 week and were well preserved during use, there was no need for sodium azide.

Pasting property analysis was carried out using Perten RVA TecMASTER instrument. 25 mL of distilled water was poured into the sample canister prior to adding 3 g of pulverized and sieved rice into the canister. The instrument paddle was placed prior to analysis.

SEM analysis was done with a Hitachi S-4800 electron microscope. Rice grains were cut with scalpel and fixed in formalin-acetic-alcohol solution and were sputter-coated with gold and examined at a magnification of 500 and 3,500 at 10.0 kV. Pasting properties of starch, including viscosity and pasting temperature are important indicators of how the starch will behave during processing. Starch is generally regarded by researchers concerned with the eating quality to be the most important constituent of rice. The pasting properties of starch are used in determining the suitability of use for particular sources of starch in various foods and other allied product applications. Table 1 reveals that Hua Jing Xian 74 has a higher final viscosity of 4686 cP, higher pasting temperature of 84°C compared to Basmati 385 with final viscosity of 3514 cP and pasting temperature of 78°C. Due to its high viscosity, food processed from Hua Jing Xian 74 will likely have a better appearance as compared to food processed from Basmati 385. This supposition is based on [15], who reported that peak viscosity is often positively correlated with the quality of end-products and also represents an excellent indication of the viscous load likely to be encountered by a mixing cooker. 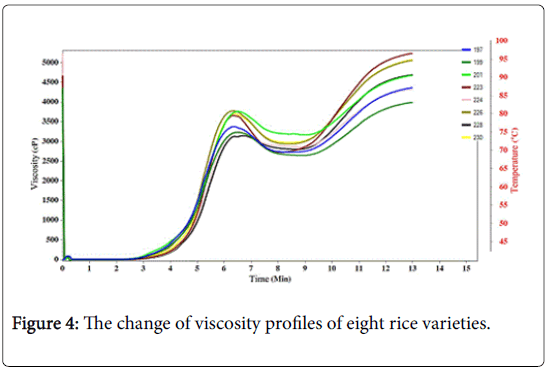 Figure 4: The change of viscosity profiles of eight rice varieties.