Copyright: © 2017 Zeeshan M, et al. This is an open-access article distributed under the terms of the Creative Commons Attribution License, which permits unrestricted use, distribution, and reproduction in any medium, provided the original author and source are credited.

Site-specific agriculture includes the application of soil on variable areas rather than the whole field and requires the knowledge of spatial variability of soil nutrients in the area. A survey was conducted to find out the spatial variation of soil macronutrient, to prepare the soil fertility maps and to correlate soil nutrients with NDVI values, at University Research Farm, Koont, Chakwal. Soil samples were collected and analyzed for soil macronutrient (NO3- N, P, K, SO4-S and CaCO3) concentration through standard procedures. Obtained data were analyzed by using GIS and ordinary statistics to predict the spatial variability and preparation of digital maps of the soil macronutrients. NDVI values were calculated by acquiring the cloud free landsat images of study area to correlate with soil macronutrients. The results showed that, NO3-N and Available P were deficient in study area and were having the mean value of 7.54 mg kg-1 and 6.64 mg kg-1 respectively. K and SO4-S were in satisfactory ranges and were having average values of 130.3 mg kg-1 and 8.69 mg kg-1 respectively. Study area was classified as moderately calcareous soil and lime content were having the mean value of 7.88%. Geostatistical analysis showed that NO3-N and available P were strongly spatial dependent while K, SO4-S and CaCO3 were moderately spatial dependent. Pearson correlation analysis among NDVI values and soil parameters showed that NO3-N, P, K and CaCO3 were significantly positively correlated with NDVI values whereas SO4-S showed non-significant positive correlation with NDVI values. Study recommended that spatial variability of soil properties should be taken in account in decision making processes regarding farm operations such as fertilizer application, more studies on different spatial scale should be conducted and use of such techniques in profitable and sustainable site-specific agriculture should be promoted.

Blind and uniform application of fertilizer, without knowledge of farm fertility status and spatial variability of nutrients is a common problem in this era that lead to the reduction of farmer profit. It has been observed in several studies that soil nutrients vary spatially in the fields [1]. Site specific agriculture is based on the management of spatial variation of soil nutrients by the application of amendments according to the specific site and crop [2]. Quantification and awareness of spatial variability of soil properties is a key for such type of management practices [3].

Different technologies have been developed that make us enable to improve the application of different amendments in accordance to their need [4]. Geostatistical approach is very supportive for the assessment of spatial varability as well as to predict the values at unsampled location of the study area [5]. Spatial variation and digital mapping of OM content were studied by many workers to develop the site specific agriculture technology for different areas [6-8]. Geostatistics is a statistical method that can be successfully used in soil science for preparation of maps and to estimate the soil properties at unsampled location [9]. Geostatistics has been proven a suitable technique for the evaluation and description of spatial pattern of soil properties and wheat yield. Identified spatial pattern and wheat yield by geostatistical and semivariogram analysis has been found helpful for the division of fields into different management zones such as fertilizer management, as well as gypsum application for reclamation of salt affected areas. Krigging and semivariogram was found helpful for the prediction of soil properties at unsampled locations [10].

Krigging is a technique that is used for the interpolation of unknown sites from measure sites to study the spatially variable processes. The term krigging is a generic name that has been adopted to appreciate the pioneer work of Daniel Krige. Kriging is the onesided average that is based on the known spatial dependence as shown by the semivariogram. It is able to provide more reliable description of spatial pattern for the soil characteristics than all other interpolators as observed in many comparative studies [11]. Noor et al. [12] in 2013 conducted a research trial for the estimation of spatial variability of micronutrients in citrus orchards by using krigging technique. The results revealed that almost all maps shown that micronutrients varies spatially in the field.

The Normalized Difference Vegetation Index (NDVI) shows patterns of vegetative growth from green-up to senescence by indicating the quantity of actively 4 photosynthesizing biomass on a landscape [13]. Verhulst et al. [14] demonstrated that the spatial variability of soil properties influence the crop performance and is correlated with the NDVI values by affecting the spectral characteristics of vegetation. Ma et al. [15] showed that higher the nitrogen contents increase the chlorophyll content and leading to increased NDVI values.

Keeping in view the above scenario a study was designed with the aim to examine the spatial variation of soil nutrients at farm level, to prepare the soil fertility maps and to correlate NDVI values and soil macronutrient status of University research farm Koont, Chakwal.

ArcGIS 10.1 software was used for statistical and geostatistical analysis of the data. Semivariogram analysis was done to calculate the nugget to sill ratio, which indicates the degree of spatial dependence by using uniform interval to establish the range of spatiality. According to criteria given by Attar et al. [21] spatial dependence is classified in to weak (ratio >75%), moderate (ratio 25-75%) and strongly spatial dependent (ratio <25%). Other statistical parameters of data such as mean, minimum, maximum and standard deviation (S.D) were also calculated. Co-efficient of variance (CV) was calculated to check the variation of soil nutrients in soil. Soil nutrients with CV<15% were grouped as least variable, nutrients with CV value 15-35% were moderately variable while nutrients with CV value >35% were grouped as highly variable Wilding [22]. Co-efficient of skewness and kurtosis were calculated to check the normality of distribution of data and our data did not show the normal distribution, so the data was logtransformed. Log transformed data made it clear that data was normally distributed. Data was cross validated by plotting a graph between the measured values on X-axis and predicted values on Y-axis which lead to the plotting a QQ plot between standardized error on Y axis and Normal value on X-axis to show the quantiles of difference between estimated and predicted values and relating quantiles from a standard normal distribution.

Soil fertility maps of study area were prepared by using ArcGIS 10.1 software indicating the concentration of macronutrients at different locations of the area. GPS points of each sample were used to prepare the maps.

NDVI mapping and Correlation of NDVI and soil macronutrients

Geostatistical analysis of the data

QQ plot assured the normal distribution of the data (Figures 1,3,5,7 and 9) and semivarience curve was obtained to check the degree of spatial dependence of data (Figures 2,4,6,8 and 10). And spherical model was best fitted for all nutrients. Nitrate nitrogen was found moderately variable with CV% 29.31 (Table 1). Non Log transformed data of Nitrate nitrogen showed the range of 1.23855Ao, data was strongly spatial variable as indicated by and nugget to sill ratio which was 13.784%. Available phosphorus was found highly variable within the study area with higher CV% of 47.74 (Table 1). Log-transformed data of available P contents and the range was 1.23855Ao. Nugget to sill ratio was 23.64% indicating strong spatial dependence of available P within the field. Extractable Potassium contents exhibited a weak variability with in the field with CV% 23.56 as listed in (Table 1). Extractable K was having the range of 1.23855Ao and Nugget to sill ratio was 38.23% pointing out the moderate spatial variability of K concentration with in the fields. Sulfate sulfur showed that there was a high variation in its concentration within the field CV% of 36.65 with as listed in (Table 1). Sulfate sulfur was having rang of 8.6691 Ao while Nugget to sill ratio was 38.90% giving an indication of moderate spatial variation of the sulfur. A weak variation in concentration of Calcium was reported with CV% of 19.92 as shown in (Table 1). Lime was having the range of 6.52826 Ao. Semivariogram analysis of lime contents showed nugget to sill ratio was 32.73%, indicated the moderate spatial variability of lime contents. All the geostatistical data is summarized in (Table 3). 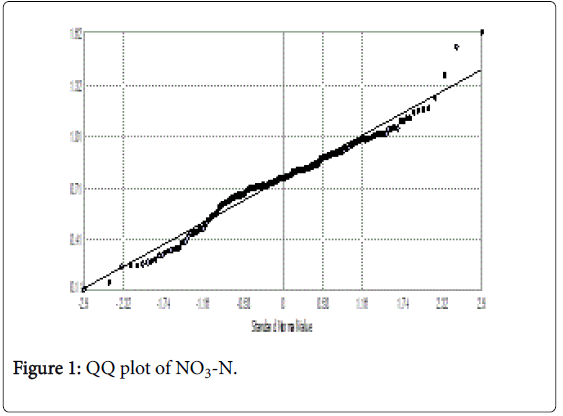 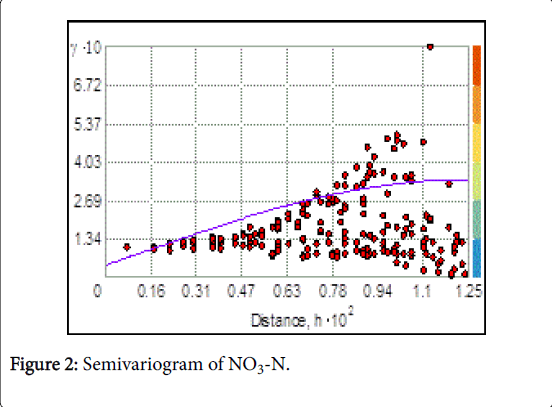 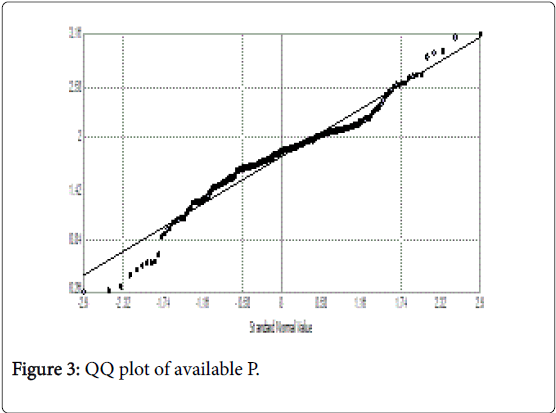 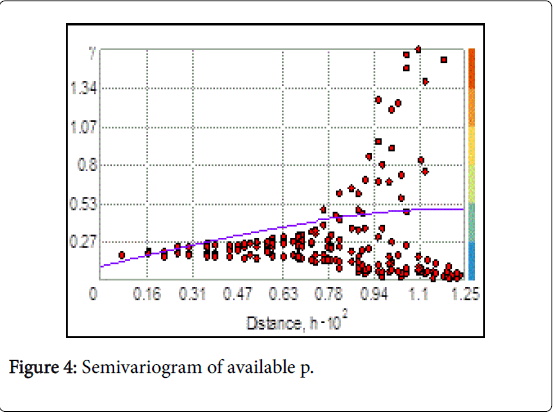 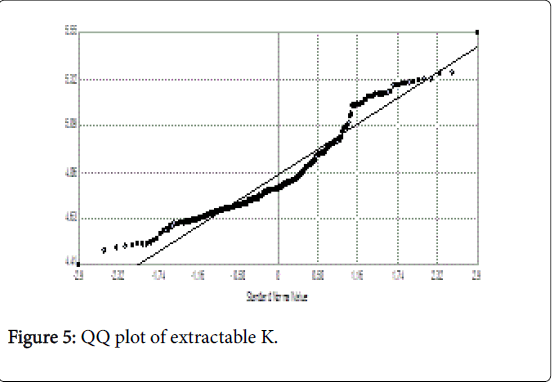 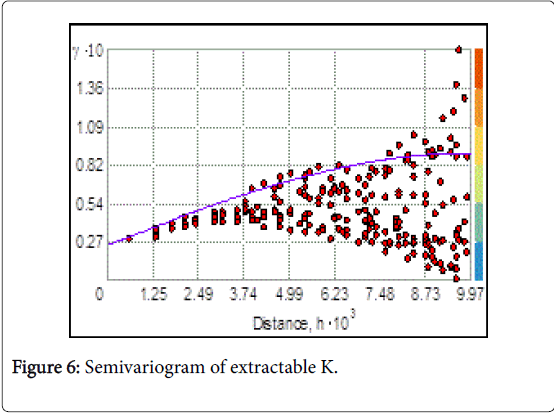 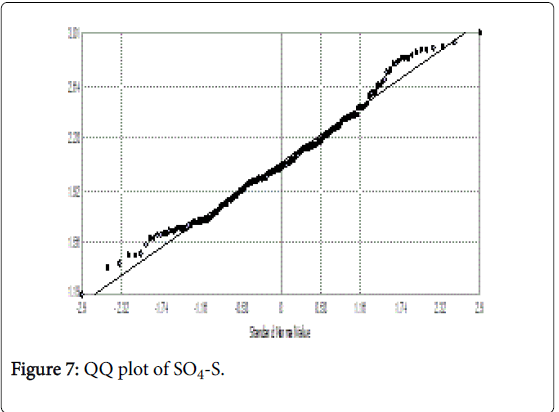 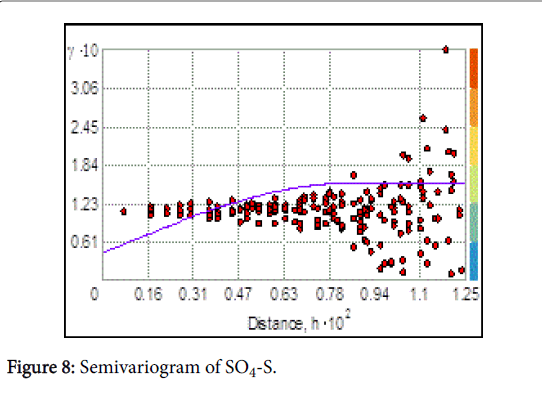 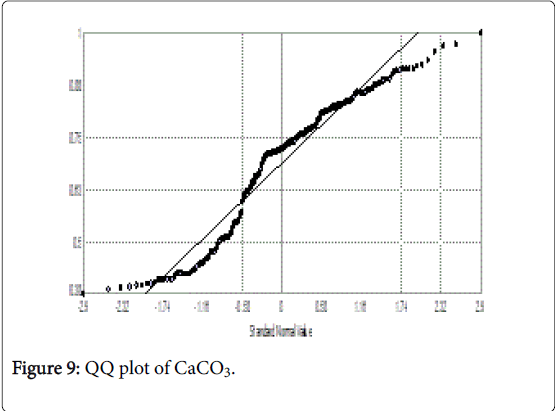 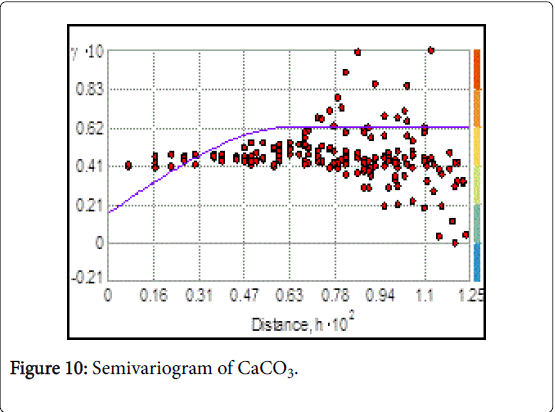 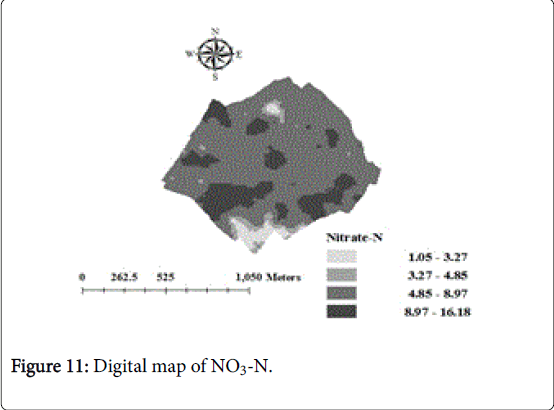 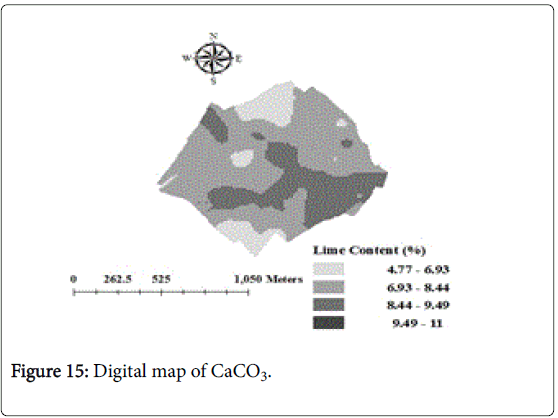 The Normalized Difference Vegetation Index (NDVI) shows patterns of vegetative growth from green-up to senescence by indicating the quantity of actively 4 photosynthesizing biomass on a landscape [13]. Landsat images of study area were acquired for one year duration. Cloud free images were used for NDVI calculation according to the prescribed procedures. Figures 16-24 show the NDVI maps of the study area for different dates. A large temporal as well as spatial variation was observed in the NDVI of the study area. The diversity of crops sown and their low density resulted in the relatively smaller NDVI values. Other reasons of lower NDVI values might be the irregular cropping pattern and the difference in sowing time of the crops. 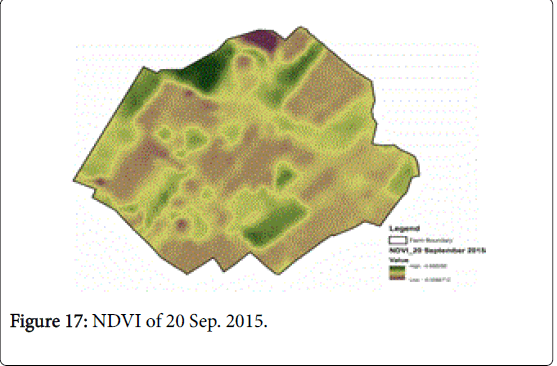 Correlation among NDVI and soil macronutrients

Pearson correlation co-efficient among NDVI values and macronutrient contents are presented in Table 4. It was found that NDVI values of 16-June-2015 was showing the best relationship with soil fertility status, while the relation is lost with the NDVI values of image beyond this period, because it was the sowing period just after the sampling. It was found that K, P, NO3 and CaCO3 were having significant positive correlation with NDVI values. Similar results has been described by Ma et al. [15] higher the nitrogen contents increase the chlorophyll content and leading to increased NDVI values. Whereas SO4 was having non-significant positive correlation.

Nitrogen and Phosphorus were strongly spatial dependent while Potassium, sulfure and Lime content were moderately spatial dependent. N and P was deficient in 95% and 78% samples respectively while K and S were in satisfactory ranges in 86% and 95% samples respectively. Most of the samples were moderately calcareous. Soil macronutrients were significantly positive correlated with NDVI values of studied area.

Spatial variability of soil macronutrients should be taken into account during decision making related to the farm interventions like application of fertilizer/soil amendments and other farming operations. More studies on different spatial scales are required for further recommendations and use of such techniques in profitable and sustainable site-specific agriculture. 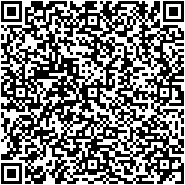