Nicotine and Alzheimers Disease: Mechanism for How the Fog of Smoke Increases the Fog of Dementia | OMICS International

Nicotine and Alzheimers Disease: Mechanism for How the Fog of Smoke Increases the Fog of Dementia

Copyright: © 2016 Allen HB, et al. This is an open-access article distributed under the terms of the creative commons attribution license, which permits unrestricted use, distribution, and reproduction in any medium, provided the original author and source are credited.

It has been reported that cigarette smoking significantly worsens Alzheimer’s disease (AD) [1]. Miklossy, confirming the observations of Macdonald, has recently been able to culture Borrelia burgdorferi spirochetes from the brains of AD patients [2,3]. Further, she has shown these spirochetes made biofilms (and both β-amyloid precursor protein and β-amyloid) in vitro . Also, it has recently been shown that biofilms form the distinctive plaques seen on pathological examination of the affected brains [4]. Further, these plaques/biofilms activated the Toll-like receptor 2 (TLR 2) of the innate immune system in an attempt to destroy the microbes and biofilm [4]. NFκB and TNFα are the agents of destruction generated by this process, but, because of the protective biofilm encasing the microbes, instead of killing them, they destroy neural tissue instead [4]. The NFκB, in concert with β amyloid converting enzyme, catalyzes β secretase which cleaves β amyloid precursor protein into B amyloid. Β amyloid itself is antimicrobial [5].

It must be noted that Borrelia burgdorferi spirochetes are not the only organisms found in AD brains, in fact, they only comprise 25% of the total while dental spirochetes make up the remaining 75% [3]. Further to be recognized, AD has been shown to have exactly the same pathology as syphilitic dementia; consequently, the only difference between the two diseases is the presence of different spirochetes [3]. As has also been reported, it is not the microbes or the biofilms that they make that cause the damage in AD; it is the action of the immune system that is responsible [4]. However, it is the presence of the biofilms that triggers the activation of TLR 2 [6], so, if there are more biofilms, it is not unreasonable to postulate there will be more TLR 2 activation (and vice versa).

There are many compounds which disperse biofilms; and, unless there are bactericidal antibiotics present when these biofilms are broken apart, they will seed the formation of new biofilms. This will yield greater numbers of biofilms and a greater immune response. These biofilm-dispersing compounds include furans, thiophenes, pyrroles, piperidines and others [4]. The biofilm dispersers have either 5 membered rings with oxygen (furans), nitrogen (pyrroles) or sulfur (thiophenes) in key positions; or they have 6 membered rings with nitrogen (piperidines, thiophenes, rifampin) similarly situated (Figures 1a and 1b). 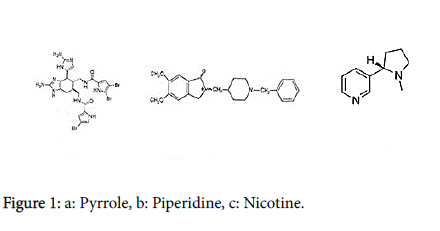 Biofilm dispersal, accompanied by antibiotics directed at the microbes making the biofilm, is a way to effect a potential cure of the disorder and has led to remarkable achievements in such previous devastating diseases as leprosy [7]. Biofilm dispersal along with antibiotics in a closed system such as the brain only adds to the underlying disease. The blood brain barrier works in both directions, so it is just as difficult to get things “out” as it is to get things “in”. This results in a massive accumulation of β amyloid and biofilm debris, which the microglia cannot possibly clear.

All the foregoing is a prelude to the subject for discussion. Nicotine, which is present in cigarette smoke, is a pyrrole: in fact, its chemical name is 3-(1-Methyl-2-pyrrolidinyl) pyridine. It is also related to piperidines as can be seen in the figure (Figures 1a-1c). As such, by very nature, it is a biofilm disperser with not one, but two chemical components capable of breaking biofilms. Consequently, as mentioned above concerning biofilm dispersal, newly released microbes with the proven capability of making biofilms are eminently capable of forming new biofilm communities. This leads inevitably to worsening of the disease process.

In nature, without the nicotine, the process of establishment of new foci of disease depends on either an increasing supply of microbes that make biofilms (as part of their quorum sensing capabilities), or the development of “exporter” cells (cells that leave the biofilm). Also, without nicotine or some other stimulus, the process of making new biofilms is exceedingly slow [4]. It takes 30 to 50 years for syphilitic dementia to develop, and as noted, AD and syphilitic dementia are the same. The major reason for this is it takes a very long time for the spirochetes to divide; thus, to make a “quorum” for one biofilm community, requires up to two years.

Helping prevent the fog of AD is but is one more reason to quit smoking.