Pathogenesis of An Intracranial Mycotic Aneurysm in An Immunocompromised Patient

Copyright: © 2017 Marianayagam NJ, et al. This is an open-access article distributed under the terms of the Creative Commons Attribution License, which permits unrestricted use, distribution, and reproduction in any medium, provided the original author and source are credited

Mycotic intracranial aneurysms are rare entities that can be rapidly fatal. The pathology of these lesions are usually due to bacterial infections however in exceptional cases such as immunocompromise, fungal agents are also found to be the cause. In this study, we present the case of a 43-year old, immunocompromised, male patient who suffered from a ruptured mycotic aneurysm after undergoing surgical evacuation of a basal ganglia brain abscess. Pathological analysis of the lesion showed that Aspergillus fumigatis was the causative agent. Since these types of lesions are rare, there are few clinical guidelines for treatment. We emphasize that in an immunocompromised patient with sudden neurological deterioration, mycotic intracranial aneurysm should be in the differential diagnosis.

Mycotic aneurysms are a rare entity accounting for less than 5% of all intracranial aneurysms [1]. Bacterial agents constitute the most common cause of this entity. Fungal agents, although uncommon can also cause mycotic aneurysms. Aspergillosis is the most common fungal agent involved. The mechanism is usually invasion from paranasal or orbital sinus or secondary to a pulmonary focus. The incidence of such cases has increased due to an increase in immunodeficient patients [2].

In this paper, we describe the case of an immunocompromised patient harboring a mycotic aneurysm that bled after evacuation of a brain abscess caused by Aspergillus fumigatus. We review important aspects of pathogenesis, diagnosis and treatment of this entity.

We report a 43-year-old male patient that was diagnosed with non- Hodgkin T cell lymphoma. He was transplanted with allogenic peripheral stem cells and developed Graft versus host disease. A few days before his last admission, he complained of severe coughing. A chest X-ray revealed an infiltrate in the right lung base. Antibiotic therapy was started. A chest CT scan showed evidence that the right lower lobe infiltrates were fungal in nature.

During his hospital course, the patient became confused and fell. Imaging was performed including a CT scan and MRI of the head showing possible left basal ganglia abscess (Figure 1). After neurosurgical consultation, the patient was taken for surgery to evacuate the abscess under navigation guidance. Antifungal therapy with voriconazole was started after surgery. Two weeks after surgical evacuation of the abscess, patient developed seizures and sudden weakness of his left side that progressed to plegia. The patient underwent a CT scan of the head showing a right frontal hematoma with ventricular involvement and mass effect (Figure 2). An urgent CTA demonstrated a mycotic aneurysm (Figure 3). A right frontal craniotomy was performed under navigation and intraoperative fluorescence using indocyanine green technology. Two different sections of the aneurysm were localized, clipped and resected. The hematoma was evacuated and a ventricular drain was placed in the surgical bed. The patient was transferred to the neurosurgical ICU and anti-fungal treatment continued, the patient experienced a severe systemic involvement of his infection; he subsequently deteriorated and died a two weeks later. Pathological analysis of the lesion showed that Aspergillus fumigatis was the causative agent. 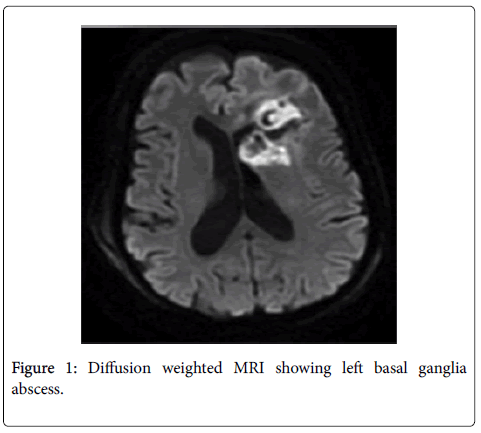 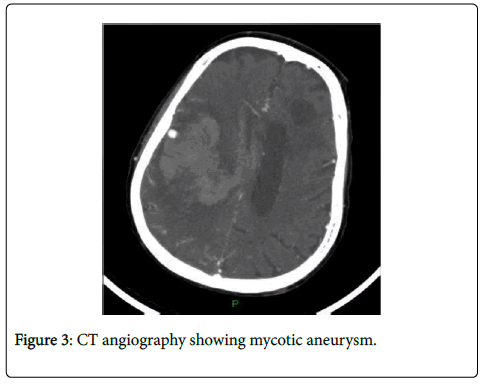 In this report, we described the case of a 43-year-old male, immunocompromised patient, who developed a mycotic aneurysm that was treated surgically. Although good clipping and resection of the aneurysm were achieved, the patient subsequently died due to postoperative complications. The management of mycotic aneurysms is unusually complex due to the virulence of these lesions and also due to the fact that most patients that harbor these lesions are immunocompromised.

Aspergillus is most commonly found in the lungs and spread to the brain by hematological dissemination. Another source is involvement of the orbital or paranasal sinus, or ear and spread to the brain is achieved by invasion of the mucosal walls and bones of the skull base. The incidence is growing due to prolonged survival for malignancies and higher rates of transplant patients. The virulence of Aspergillus lies in its capacity to produce enzymes like elastase which enables remodeling of the vessels wall and which enables formation of aneurysms that are prone to rupture [3]. Elastase negative strains of aspergillus are generally less virulent than the elastase positive strains [3].

As far as diagnosis goes, pathological staining is characteristic for septate hyphae invading the vessel wall (Figures 4 and 5). There are no classic findings in imaging but some important clues may help to define the fungal etiology. In CT scans, bony involvement and comprise of the paranasal sinus helps to reach the diagnosis. On MRI, the fungal agents are known to produce hemosiderin residues giving a hypo intense halo in different sequences, particularly T1 and T2 [4]. There is no homogeneous consensus regarding a definitive and effective treatment.

Some reports recommend infusing antimycotic drugs into the surgical cavity of the aneurysm and also to give initiate intrathecal therapy post operatively, however there is little data to support this method of therapy [5]. Hyperbaric therapy has also been employed for patients with mucormycosis of the paranasal sinus and some suggest its use in patients with aneurysm formation [6]. In a patient that is immunocompromised with sudden neurological deterioration, the clinician must have high index of suspicion for mycotic aneurysm. Imaging studies should be ordered immediately and neurosurgical consultation should be initiated where appropriate.