Depression, Anxiety, and Hopelessness in Patients with Chikungunya Fever in Brazil

Department of Post-Graduation in Neuropsychiatry and Behavioral Sciences, Federal University of Pernambuco, Brazil

Copyright: © 2016 Martins HAL, et al. This is an open-access article distributed under the terms of the creative commons attribution license, which permits unrestricted use, distribution, and reproduction in any medium, provided the original author and source are credited.

Chikungunya virus (CHIKV) is an alphavirus found worldwide that is now, with a very large outbreak mostly in the northeast of the country, an emerging disease in Brazil. This study consisted of a series of 18 females and two male patients, with ages ranging from 31 to 87 years and a mean age of 54. The patients presented anxiety or depressive symptoms that emerged during the acute phase of CHIKV infection and remained for at least one year. For the purpose of statistical comparisons, a control group was formed of 15 females and five male individuals without CHIKV infection and aged from 29 to 72 and a mean age of 48. Anxiety, depression, and hopelessness symptoms were prevalent in patients one year after CHIKV infection.

With recent outbreaks in South America, Chikungunya virus (CHIKV) is an arbovirus responsible for an illness mainly characterized by acute fever and severe joint pain [1]. CHIKV is transmitted by the bites of mosquitoes of the Aedes genus [2-4] that are common on this impoverished continent making the conditions ideal for the development of an epidemic [1]. Among the alphaviruses, CHIKV is the most significant human pathogen in terms of morbidity [2,5,6]. The severe rheumatologic consequences of CHIKV are very well known, but other areas of clinical practice have only recently started to pay attention to this pathology.

In the Kimakonde language, spoken by an ethnic group in southeast Tanzania and Northern Mozambique where the first cases of this disease were described, the word chikungunya means “to become twisted” [7]. CHIKV is better known for general clinical signs such as fever, headache, myalgia, skin rash and a very intense arthralgia that can remain for a long period after the acute phase of the disease. However, recently, psychiatric symptoms have been described in patients with chikungunya fever [8].

In this paper, we describe a series of patients with CHIKV presenting anxiety, depression, and hopelessness one year after the acute phase of the disease.

This study consisted of a series of 18 females and two male patients with ages ranging from 31 to 87 years and a mean age of 54 (Figure 1). The patients presented anxiety or depressive symptoms that emerged during the acute phase of CHIKV infection, and remained for at least one year. All patients were diagnosed with CHIKV serologically and were treated clinically for one year. They were evaluated in respect to the psychological complications of CHIKV infection 12 months after the acute phase of the disease. All patients were assessed in a private clinic in Surubim city, northeastern Brazil between October, and November 2016. As an exclusion criterion, 18 patients with a history of psychiatric disease prior to CHIKV infection were excluded from the study as were patients with other chronic diseases and on chronic use drug were. 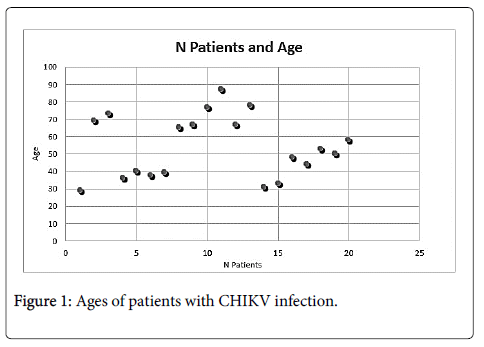 For the purpose of statistical comparisons, a control group was formed of 15 females and five male individuals with ages ranging from 29 to 72 and a mean age of 48. None of the control group had any signs or symptoms suggestive of CHIKV infection. Both groups completed research instruments that aimed to assess levels of anxiety or depression. The instruments were the Beck depression inventory (BDI), a 21-question multiple-choice self-report inventory to measure the severity of depression, the Beck anxiety inventory (BAI), a 21- question multiple-choice self-report inventory to measure the severity of anxiety and the Beck hopelessness scale (BHS) that measures the main aspects of hopelessness: feelings about the future, loss of motivation and expectations. The groups were compared using the Chi-square test. This study was approved by the Research Ethics Committee of the Federal University of Pernambuco and all patients gave their written consent.

Table 1 shows the distribution of the frequencies of symptoms of anxiety, depression and hopelessness in patients one year after CHIKV infection and in control subjects. Moderate anxiety was more prevalent among patients who had suffered from CHIKV infection. Eight of 20 patients had severe anxiety, while there were no cases of severe anxiety in the control group. Moreover, these individuals had more mild-tomoderate symptoms of depression than the control subjects did and hopelessness was slightly more prevalent in patients who had had CHIKV.

Psychiatric complications in patients with Chikungunya fever are not as well known as other complications such as neurological, dermatological, and rheumatologic manifestations [4]. In this report, twenty patients without previous history of psychiatric disease suffered alterations in their mood and anxiety during the acute phase of CHIKV infection that lasted for up to one year after the onset of the disease. They presented more anxiety, depressive and hopelessness symptoms than members of the control group.

Recently, a paper was published that reported for the first time about psychiatric morbidities in patients with CHIKV infection in India where the disease is an epidemic. The authors only described the symptoms of twenty patients with psychiatric complaints; depressive symptoms were found in five, and anxiety symptoms in three [4].

Even though CHIKV is not considered a neurotropic virus, several neurological complications have been described [1] and more recently mental disorders have been reported as a consequence of the viral involvement of neurons. This increases the possibility that CHIKV infection changes the way the nervous system functions [4].

During this study, to comply with the exclusion criterion, a large number of patients, who had anxiety and depressive symptoms prior to CHIKV infection, were excluded. However, the authors believe that it is probable that patients who suffer from a psychiatric disease become worse after this disease.

The results of the present study clearly show a tendency of patients with CHIKV having many depressive, anxiety and hopelessness symptoms. Perhaps the limitation of this research is the small number of patients who participated. Studies with a larger number of patients will be necessary to definitively establish a possible relationship between CHIKV infection and the onset of depressive and anxiety disorders.