Atypical Ductal Hyperplasia(ADH) is a frequently detected precancerous lesion in the breast of individuals aged 40 -50. Autopsy studies detected moderate to severe hyperplasia in over 30% of women aged 45-54 [8-10]. ADH is a well-established precursor of breast cancer [11-14]. Women with ADH have approximately fivefold increased risk of developing breast cancer [13-17]. In addition, gene expression profiling of ADH, Ductal CarcinomaIn Situ (DCIS), and Invasive Ductal Carcinoma (IDC) showed that these three stages of breast cancer are highly similar to each other at the transcriptional level [18], further suggesting that ADH is a precursor during breast cancer evolution. However, very little is known about the stem cells profile in these precancerous lesions. To measure the number of stem cells and understand their proliferating state in ADH compared with UDH and normal duct is helpful in order to generate a strategy of cancer prevention.

Aldehyde Dehydrogenase 1 (ALDH1) is a basic substance used in the function and metabolism of the normal stem cells and cancer stem cells. A large number of clinical experiments indicate that breast cancer cells that possess high ALDH1 activity [19] contribute to recurrence and metastasis, leading to poor prognosis and lower survival rates. A series of reports prove that ALDH1 can be used as an ideal marker of breast cancer stem cells [20]. Dong Yi [21] has shown that patients with positive ALDH1 expression in primary tumors and in ALNM had significantly shorter Relapse-Free Survival (RFS) times and Overall Survival (OS) times compared to those whose tissues were ALDH1 negative. However, Bednarz-Knoll [22] reported ALDH1 (+) stroma in the primary tumor correlated to longer disease-free and metastasis-free times as well as overall survival, having an independent prognostic impact on DFS. Anwar [23] found that the ability of breast epithelial cells to undergo an epithelial-to-mesenchymal transition has been linked to the acquisition of stem cell properties and enhanced tumor invasion, metastasis, and resistance to available treatments [24]. ALDH1 is an ideal marker of breast stem cells. We found that the pattern of ALDH1 expression is in both cytoplasm and matrix. As we know, stem cells have a characteristic undergoing EMT. If we detect ALDH1 in the myoepithelial cells and mesenchymal cells, we could assume there are cancer stem cells of these cells, we could also assume the cancer stem cells come from breast epithelial cells which undergo an epithelial-to-mesenchymal transition. So the expression of ALDH1 in the myoepithelial cells and mesenchymal cells may play a role in Epithelial-Mesenchymal Transition (EMT). To inhibit stem cell division and cells undergoing epithelial-to-mesenchymal transition in ADH is an attractive target for therapy and breast cancer prevention. In this present study, we attempt to explore the significance of ALDH1 expression and localization in the mammary tumor and in ADH.

The ethics committee of the of Jilin University approved this study and written consent was obtained for the use of these samples in research. This study used an immunohistochemical method to detect ALDH1 expression in the pathological specimens of 160 breast cancer patients who underwent modified radical mastectomy between October 2003 and December 2008. All of the patients were females between the ages of 31 to 70 (median: 49 years), and the follow-up period ranged from 9 to 89 months (mean follow-up period: 59 months). Stage TNM was classified according to the NCCN Clinical Practice Guidelines in Oncology (version 2015). The postoperative information was recorded. Detailed patient information is summarized in Table 1. Patients who died of other diseases were excluded from this study. 50 specimens of ADH patients, 20 specimens of UDH patients and 22 specimens of normal duct patients were obtained from patients who had surgeries between 2010 and 2014 (Table 2) in the First Hospital of Jilin University, China. Immediately after the surgical dissection was finished, all tissues were fixed in formalin overnight. The resulting paraffin-embedded tissue blocks were used for the study of ALDH1 expression in ADH and UDH in human breasts. Hematoxylin and Eosin (H&E)-stained slides were evaluated by Dr.Lirong Bi from the First Hospital of Jilin University with the microscope of Olympus IX51 and tissue specimens that demonstrated one or more pathological lesions (UDH and ADH) were selected. Pure ADH (n=50) and UDH (n=20) tissues were biopsies or surgical resection specimens from noncancerous breasts (i.e., without DCIS or IDC)

After inhibiting the endogenous peroxidase activity with 3% H2O2, non-specific binding was blocked by incubating the slides with nonimmune serum for 15 min, then by incubating the sections with the primary antibody at 4°C overnight. Next, the sections were incubated with a secondary antibody for each marker at 37°C for 15 min, then with the avidin-biotin-peroxidase complex solution at 37°C for 15 min. The antigen-antibody reaction was visualized with DAB at room temperature without light for 5 min and counterstained with hematoxylin.

The associations between ALDH1 expression and the status of the cancer were tested using the Chi-square test and Kruskal-Wallis rank sum test. The Relapse-Free Survival (RFS) and Overall Survival (OS) rates were calculated using the Kaplan–Meier method. The statistical significance of the differences between RFS and OS curves were determined using the log-rank test. Statistical analyses were carried out using the SPSS statistical software (version 19.0, USA). The significance level of P<0.05 was considered to be statistically significant. As for the semiquantitative assay of ALDH1 expression, the Kruskal-Wallis rank sum test was used because the data did not conform to the normality test and the single factor of analysis of variance could not be applied. Each group of data is expressed with a median (interquartile range).

ALDH1 was expressed in a few cells in most samples except in a few cases of ADH, UDH and normal ducts, in which ALDH1 expression showed extensive distribution which was shown in Figures 1-3. Table 3: Chi-square tests of ALDH1 expression in the cytoplasm of three kinds of tissues hasstatistical significance.

The expression of ALDH1 in the stroma of IDC, ADH and UDH

Table 4: Chi-square test of ALDH1 expression in the stroma of three kinds of tissues has statistical significance.

The difference of ALDH1 expression in the cytoplasm of ADH, UDH and normal duct

Kruskal-Wallis rank sum test of ALDH1 expression in the cytoplasm of three kinds of tissues has no statistical significance (P>0.05 shows in Table 5).

Table 5: Kruskal-Wallis rank sum test of ALDH1 expression in the cytoplasm of three kinds of tissues has no statistical significance

The difference of ALDH1 expression in the stroma of ADH, UDH, and normal duct

Kruskal-Wallis rank sum test of Table 4 ALDH1 expression in the stroma of three kinds of tissues has no statistical significance (P>0.05 shows in Table 6).

Table 6:Kruskal-Wallis rank sum test of Table4 ALDH1 expression in the stroma of three kinds of tissues has no statistical significance

The survival analysis of ALDH1 expression in the cytoplasm of IDC 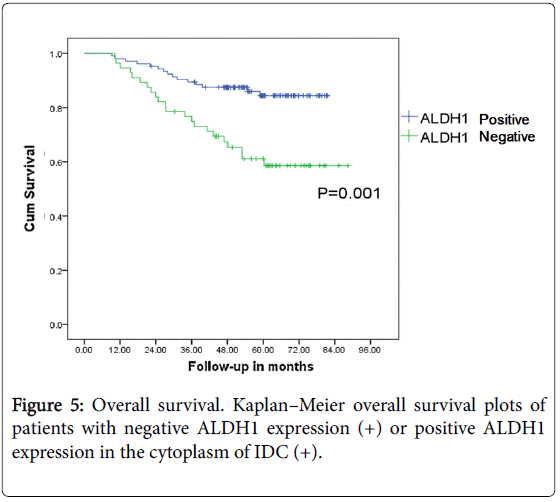 The survival analysis of ALDH1 expression in the stroma of IDC 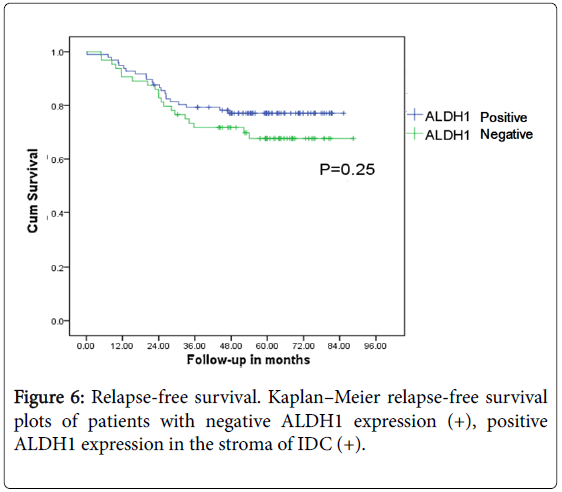 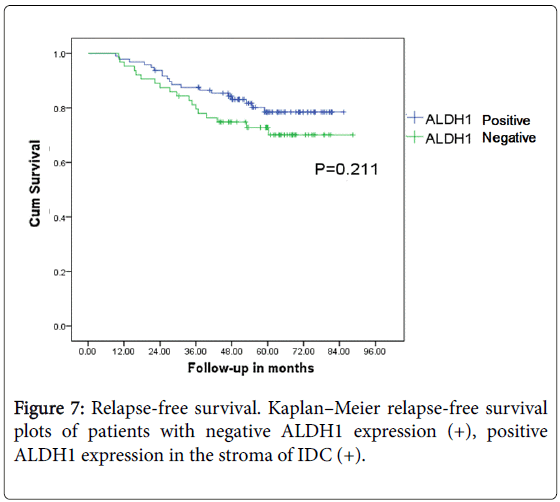 Cancer stem cells have become one of the biggest issues in the field of medical research in recent years. In the early 1960s, Lapidot [30] first reported human malignant tumor stem cells in people with CD34+CD38- phenotype of acute myelogenous leukemia stem cells.

We wish to thank Dr. Yi Li (Breast Center, Baylor College of Medicine, Houston, TX, United States) for his constructive advice and guidance. We also thank the Pathology Core Facility at the First Hospital of Jilin University for tissue processing. 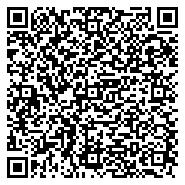